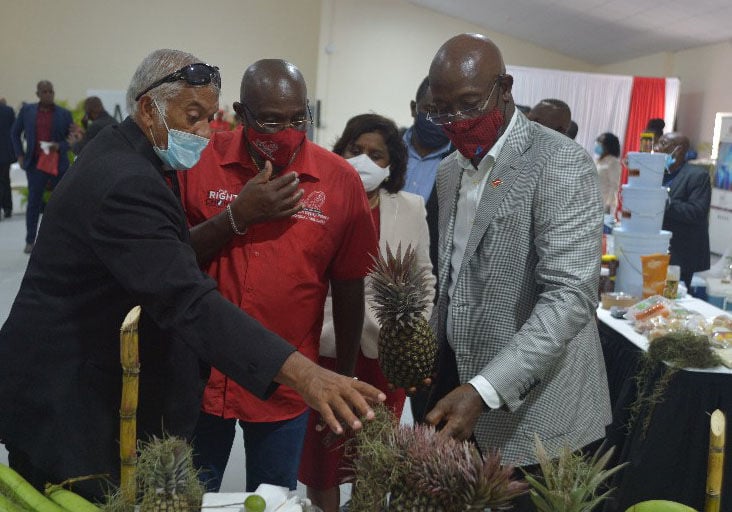 Prime Minister Dr Keith Rowley, right, during a tour of the Moruga Agro-Processing and Light Industrial Park, in Saunders Road, St Mary’s, Moruga , on July 15, following the official opening. Also at the launch are, from left, is Ramash Ramsumair, president of the Tableland Pineapple Farmers Association; Winston “Gypsy” Peters the PNM candidate for the constituency of Moruga/Tableland; and Minister of Trade and Industry, Paula Gopee-Scoon.—Photo: DEXTER PHILIP 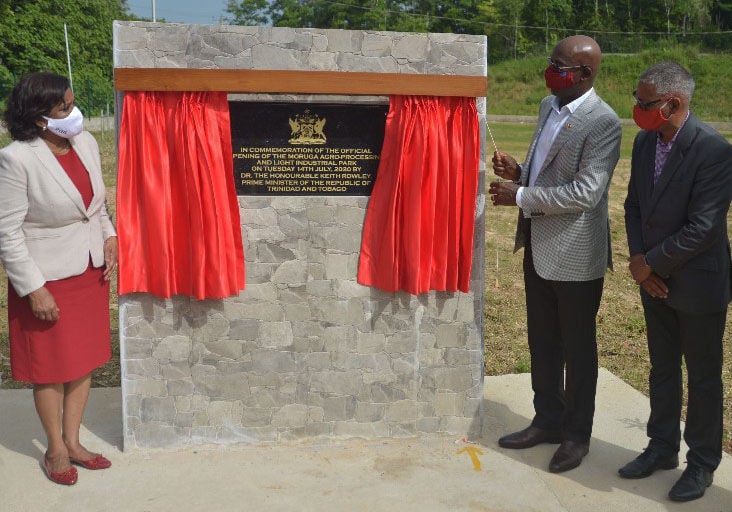 Prime Minister Dr Keith Rowley, right, during a tour of the Moruga Agro-Processing and Light Industrial Park, in Saunders Road, St Mary’s, Moruga , on July 15, following the official opening. Also at the launch are, from left, is Ramash Ramsumair, president of the Tableland Pineapple Farmers Association; Winston “Gypsy” Peters the PNM candidate for the constituency of Moruga/Tableland; and Minister of Trade and Industry, Paula Gopee-Scoon.—Photo: DEXTER PHILIP

Rowley said the park came from a promise he made to the people of the area, to bring change.

“At the end of the term, with the help of State agencies co-operating, eTecK, UDeCOTT (Urban Development Corporation of Trinidad and Tobago), Ministry of Agriculture and other Government departments, we have now completed the first agro-processing plant in Trinidad and Tobago,” Rowley said.

Speaking with Express Business last weekend, eTecK chairman Imtiaz Ahamad described T&T’s first agro-processing and light industrial park as a “bright light” for the development of agriculture in south Trinidad as it will serve as a hub of economic activity and wealth creation in the agro-processing sector. ETecK manages the facility.

Ahamad said the sod-turning ceremony for the facility took place in 2018 and several public consultations were held thereafter with all primary stakeholders on the project.

“Our feasibility study showed that Moruga was one of the best locations for developing a park of this nature, since it is considered to be the centre of the agricultural belt in the southern counties of Trinidad and Tobago.”

He noted the facility comprises five factory shells and there are an additional six lots for prospective investors, who have been showing keen interest.

Ahamad explained that interested parties who would like to apply for one of the factory shells or lots can contact InvestTT or eTeck and their real estate department would guide them through the tenancy process.

“Potential investors can visit the park, in order to determine accessibility and feasibility, for the investor’s preferred business and then the investor can access the application on the website of the agencies, then submit it through email or hand delivery. The application would then be reviewed. The sales officers at InvestTT would analyse the application and once all the requirements are met, a paper would be prepared to the respective committee to sign off,” Ahamad said.

Giving further insight into the project was Trade and Industry Minister Paula Gopee-Scoon, who reported that during the construction, and through the activities of invesTT, more than 50 persons and entities have shown interest in the Park and there are nine constructive leads which are now being followed.

Gopee-Scoon said existing and potential agro-processers can apply for the Grant-Fund Facility under the Ministry of Trade and Industry, which gives matching support of up to $250,000 for machinery and equipment.

She said when the park is fully occupied by the various tenants, creation of jobs would be 500.

“I am extremely happy about this project as it was conceptualised in 2016 and it was always the government’s aim to reduce the food import bill and have greater food security in place.”

The minister explained that the $90 million that was approved by Cabinet also came from funds earmarked for development.

She added that the contractor was Roscon Ltd, which employed over 60 per cent of the facility’s labourers from the Moruga/Tableland area.

Speaking to Express Business, chairman of the Tableland Pineapple Farmers Association, Ramash Ramsumair, said the farmers are happy to see the completed construction of such a facility, which was long overdue in the area.

“I commend the prime minister and his team for keeping to their word and having consultations with the relevant stakeholders and bringing it to fruition. However, what was disappointing is the agencies responsible for the park lapsed by not processing the leases of the farmers who applied to become tenants at the facility, several months ago. If that process was done, then tenants could have moved in and started production, but the Prime Minister did tell his team that in the next two weeks or so that all those issues are tweaked, in order to move forward.”

Ramsumair said the $90 million facility, which is located on an 18-acre site, can be turned into a $100 million revenue spinner for T&T, which will be left for generations of farmers to come, to also create jobs.

“In the time of Covid-19, citizens must come to the realisation that food security is a must and the pineapple association, which represents other farmers, is willing to share a factory shell with them at the site and apply for a soft loan, in order to bring in the machinery to start the production, to help lower the food import bill which stands at $5.3 billion.”

The chairman of the TFPA said he is hopeful that within a few months the farmers will be able to move into the multi-million dollar park and start processing along with the planting of short crops.

Also sharing his comments on the facility was Moruga Scorpion pepper farmer, Rameash Paalloo, who said the construction of the park in the area is a feasible one as the area’s advantage is its fertile ground and the region’s climate. This is good for agricultural projects to make a major breakthrough and a positive difference to the country’s exports.

“I am also the owner of OceanBell Agri Ltd and we import and export. With this new agro-processor we can focus a lot more on exporting the peppers,” Paalloo said.

He intends to develop a large acreage of land for the facility as he has already put in his application to occupy part of the land, for the purpose of cultivating Moruga Scorpion peppers with the aim of supplying downstream industries which include:

The farmer and business owner said the fishermen in the area have reached out to him on how to supply their catch to the people who will be occupying spaces at the park.

NEW businesses are emerging in Trinidad and Tobago, despite the economic fallout caused by Covid-19 and one such business is the Mansion restaurant located at the corner of Maraval Road and Rust Street in St Clair.

The Mansion restaurant is a subsidiary of NCG Enterprises and opened its doors to the public last week.

WESTMOORINGS-BASED Guardian Holdings Ltd (GHL) last week floated a J$13.4 billion (about US$90 million) bond, some of the proceeds of which will be used to acquire the insurance and annuities business of an insurance company in Jamaica, which is a wholly owned subsidiary of the Trinidad and Tobago insurance company’s Jamaican parent, NCB Financial (NCBFG). NCBFG became the majority 62-per cent shareholder of GHL in May 2019, after a protracted takeover bid.

Price must compete with open market

WHOLLY State-owned crude oil producer, Heritage Petroleum, is prepared to sell the company’s crude to the Pointe-a-Pierre refinery, if that billion-dollar State asset is transferred by the end of October to Patriotic Energies, the company formed by the Oilfields Workers’ Trade Union (OWTU).

IN our two previous articles, we shared some of the tools that you can use to get started with investing, as a means of making your money work for you. We focused on some of the available resources on our investor education website www.investucatett.com such as: a risk profile test, Investor Education Manual and Work Book and Online course, blog articles, life stages and our Investing Game, Investor Quest tt—www.investorquest-tt.com.

This year was supposed to bring great things for Guyana.

ExxonMobil discovered massive oil deposits off the South American country’s Caribbean coast in 2015, and Guyana sold its first cargo of crude oil this February. As production ramps up, its first stage offshore wells were projected to produce 750,000 barrels a day by 2025, tripling the size of Guyana’s economy, from US$3.4 billion to US$13 billion.

‘$1b in potential revenue’

Property Tax is not open for debate, Finance Minister Colm Imbert has said.

Responding to questions from the public during Monday’s Spotlight on Budget 2021 event, Imbert said he was aware of many discussions on the tax.