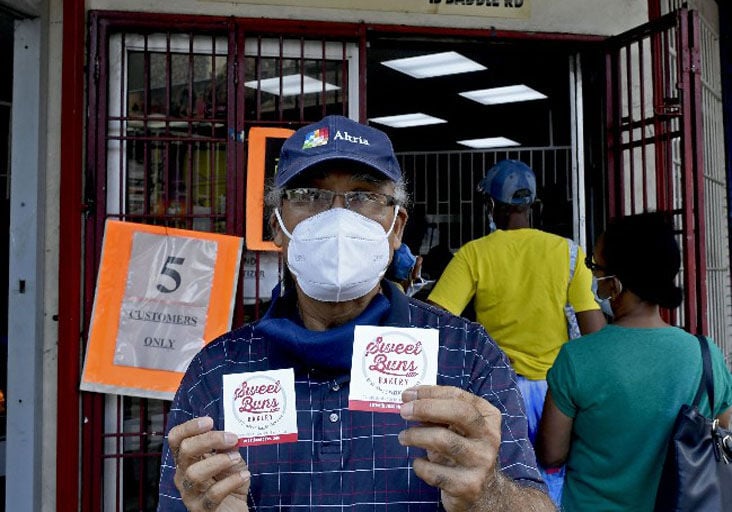 RE-BRANDING: Popular San Juan bakery proprietor Bobby Aming displays stickers for “Sweet Buns”, which will be the new name of the St Mary’s bakery, if and when he decides to reopen and continue to offer customers a variety of bread and pastries. —Photo: JERMAINE CRUICKSHANK 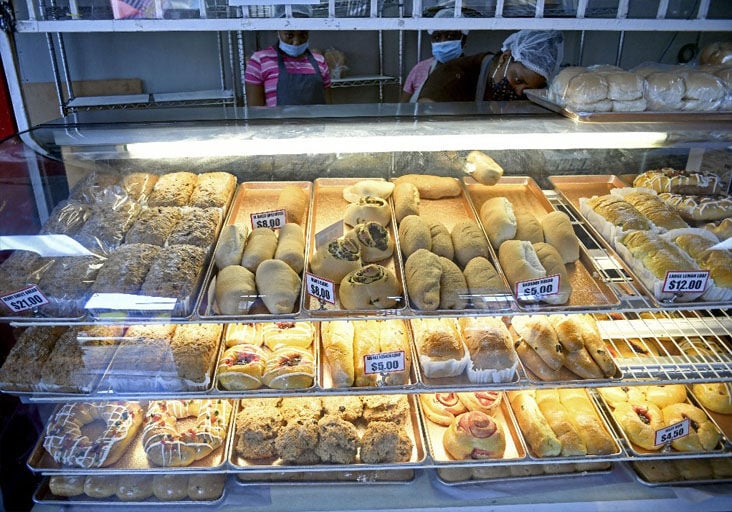 A cross-section of delectable treats and bread products at St Mary’s soon to be “Sweet Buns” bakery.

RE-BRANDING: Popular San Juan bakery proprietor Bobby Aming displays stickers for “Sweet Buns”, which will be the new name of the St Mary’s bakery, if and when he decides to reopen and continue to offer customers a variety of bread and pastries. —Photo: JERMAINE CRUICKSHANK

A cross-section of delectable treats and bread products at St Mary’s soon to be “Sweet Buns” bakery.

OFFERING tea rings, currant rolls, jam tarts and pan bread, St Mary’s bakery, located in the Croisee, San Juan, has been a popular stop for decades. But with the onslaught of Covid-19, its proprietor Bobby Aming decided to close the establishment on May 25, for one month in order to travel abroad to get the Pfzier vaccine. Aming also said he will be monitoring the country’s economic situation, and if or when he does reopen the bakery, “I plan to re-brand it as ‘Sweet Buns’ bakery.”

When Express Business visited the bakery, the 67-year-old Aming had already posted the “CLOSED” signs on the doors of his establishment. Aming took the time to thank scores of die hard customers for their support. There were a few giveaways including dainties, and “Sweet Buns” stickers. Aming also said he loved Trinidad and Tobago’s culture and its Carnival. He paid kudos to his two late relatives queenmaker Kim Sabeeney and cultural aficionado Choy Aming for their outstanding contribution to nation-building.

Asked about the move during Covid-19, Aming said: “Health before wealth. I’m not able with Covid-19. Bakeries lost sales. But we picked up a bit after doubles, fried chicken and other fast food outlets closed. There was even a slowdown with people selling bread from their cars. We enjoyed a little spike from that short season. “Bakeries will be enjoying a little more cacada (dialect for money) because we have to feed people. But we have to remember since fewer people are working, they are making breakfast at home. Eating fruits. Eating simpler, nutritious meals like peas and rice. Some people are baking bread or pastries for their children at home.”

Aming added: “But a lot of people have been coming in. We have had to work harder to make sure there’s no congregating. We were selling out early on Saturdays. More people don’t work on Saturdays now. Sales are not that good on Saturdays. We have been closing since the state of emergency. After our doors are closed, some people would go away without bread. So it’s basically, we are earning salaries to pay staff. We pay our staff $20 an hour; above the minimum wage. If we have extra products, we would give it to the homeless and hungry foreigners. We would drop it off for Venezuelans.”

Aming has also had to contend with external elements including itinerant hucksters and vendors selling vegetables and masks.

He said: “I would work hard to ensure people enter the bakery with masks, sanitise and social distance. We have always been a walk-in business. No dining. But people are coming to sell in front of the door. I don’t mind people vending. I have a problem when people plant themselves in front of the door. One guy was bold-faced. He sat in front the door with two Chinese choppers. Police could take their items, but they would do it once or twice. Police don’t really penalise them. It’s a cat and mouse game with them.

“San Juan has a fairly large homeless population. I know the popular waifs like ‘Tasso.’ He’s cool. He walks with a slight limp. A taxi driver said he saw him take a straw and drink water from the drain. How do I really know who slept where, and who is coming into the bakery? I have been discussing these issues with my daughter,” said Aming.

On his plans to travel to get the Pfzier vaccine, he said: “I’m not here for the money. I stayed open as long as possible to take care of my workers as best as I could. They have been with me for a long time. I can’t and won’t abandon them. I can’t jeopardise their health either. Half of my employees are around 50. It’s a family business. But at the same time, I am not jeopardising myself for that “small cacada”. We lost a lot of income last year. At times, we are breaking even.”

He said he cares about his health.

“I closed down a bit last year. I could close down again if I feel the need to. People are dropping like flies. I have to get my vaccine. I am not getting it here. I am getting it in the US. When I get back I will quarantine in a hotel.”

Injecting a bit of wisdom into his decision, Aming said: “I am not waiting anymore. If the rain is falling, then you will not take a chance. Rain is definitely coming. Why wait for a storm?”

Aming also said he had a relative who operated a grill, which has closed down.

On his imminent re-branding plans, Aming said: “I have made a decent living. I had my bakery to keep people employed. Originally, it was known as St Mary’s Bakery in Petit Bourg. Then we opened another outlet here. We had black cakes at about $100 to about $150 each. My wife and I ran with it. We got some home-made recipes from my mother-in-law. It’s more like leaving a legacy.”

He kept opening for a while so people could get some bread, but he had to padlock the building.

On the way forward for the country, Aming said: “People need to make money, and to feed themselves and their families. It’s a tough time. Support and cooperation within the communities are important. We have to be our brothers’ keepers.”

The Supermarket Association of Trinidad and Tobago president Rajiv Diptee is urging the public not to rush to the supermarkets today as the curfew hours for this weekend have been adjusted.

SCOTIABANK Trinidad and Tobago yesterday reported that the commercial bank recorded income after tax of $304.5 million for the six months ending April 30, 2021, an increase of $42 million or 16 per cent over the comparative half-year period.

THE Barkeepers and Operators Association (BOATT) is working with the Ministry of Finance to regularise thousands of bar workers who are not eligible to receive the Government’s salary relief grant because they are not registered with the National Insurance Board (NIBTT).

From phone to cupboard

THE COVID-19 pandemic has pushed the world to maximise the use of digital platforms. One supermarket that is making good use of this is SuperQuality.

With locations in the Trincity Industryal Estate, Couva and Chaguanas, the supermarket has launched its e-commerce store, where customers will be able to access goods and services with the click of a button from the comfort of their home.

Director of of e-commerce at SuperQuality, Dion Khan told Express Business that technology and innovation have always been his main focus for the group’s supermarkets.