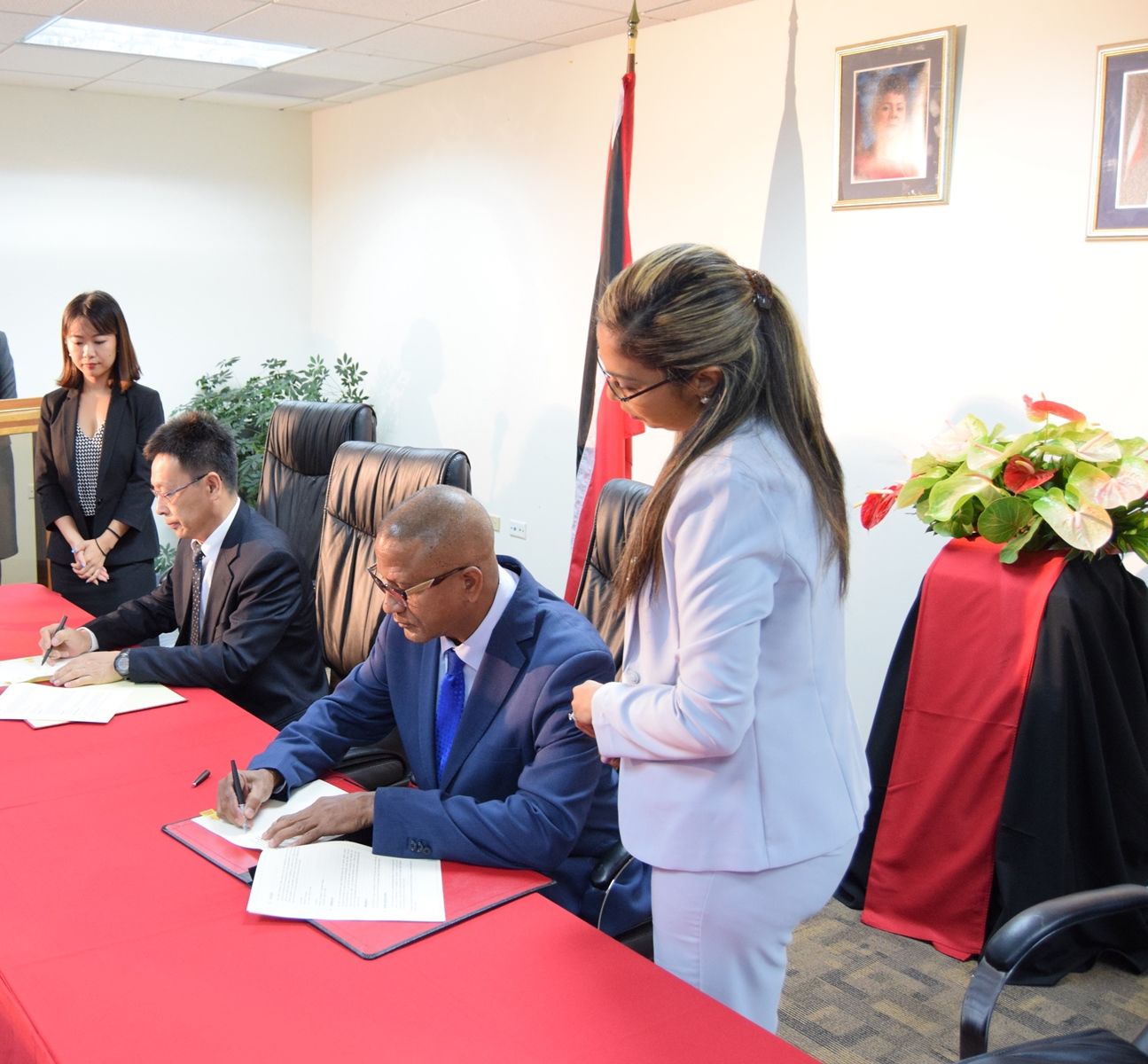 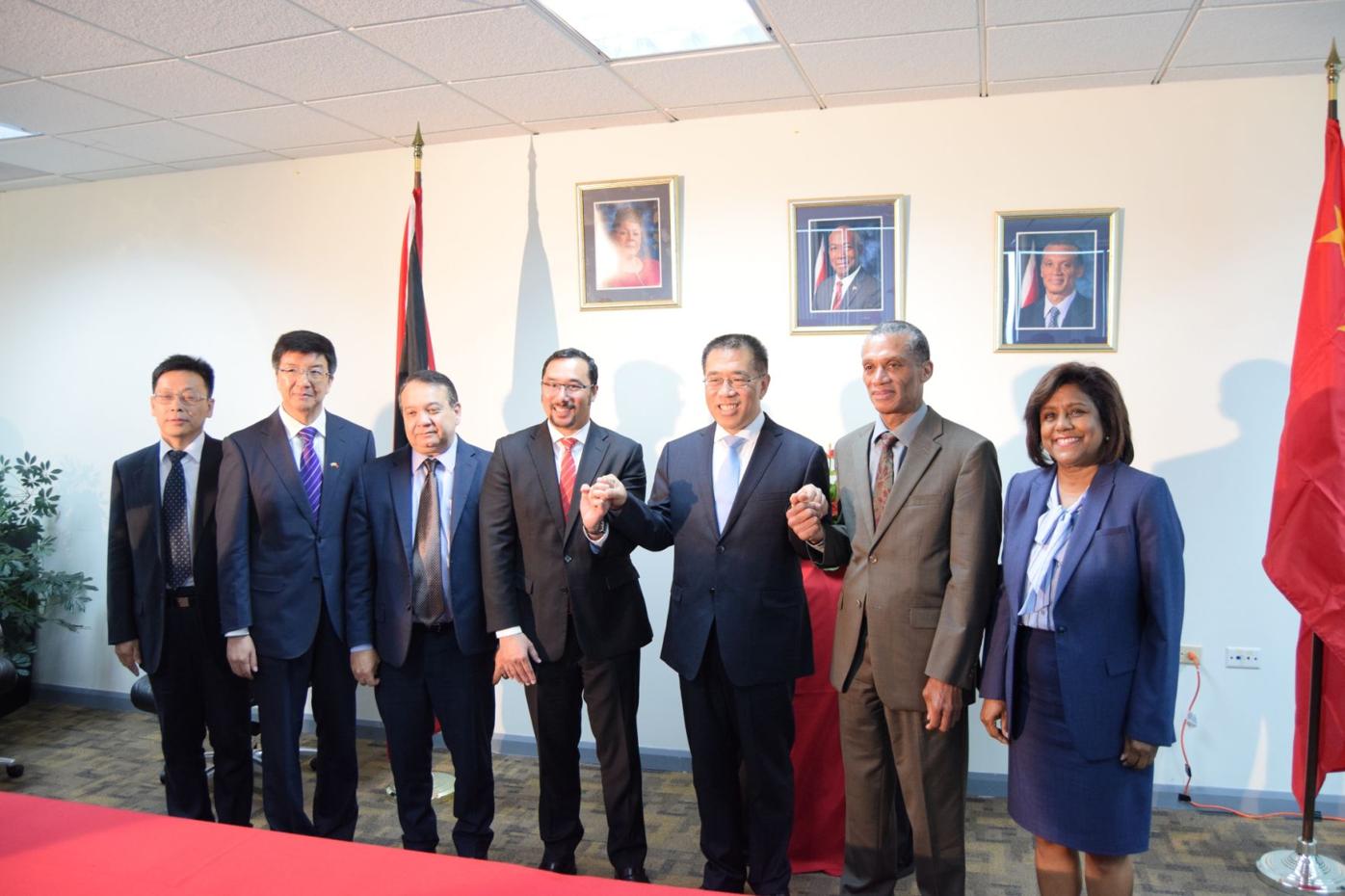 Communications Minister Stuart Young, centre, is flanked by Beijing's Vice Mayor Wang Ning, third right, and other officials during the signing of a Memorandum of Understanding for the development of an industrial estate at Phoenix Park, Point Lisas, on Monday.

Trinidad and Tobago (T&T) is set to received a much-needed economic boost following the signing of a Memorandum of Understanding (MOU) on Monday between China's Beijing Construction Engineering Group Co. Ltd. (BCEG) and the Evolving Tecknologies and Enterprise Development Company Limited (eTeck), for the development of the Phoenix Park Industrial Estate, Point Lisas.

The MOU was signed by BCEG's deputy general manager Zhang Chuancheng and Steve De Las, president of eTeck, and was witnessed by Minister of Trade and Industry Paula Gopee-Scoon as well as Vice Mayor of Beijing, His Excellency Wang Ning, who led a delegation from China. The industrial park, to be constructed by BCEG, will be implemented by Lake Asphalt Limited and eTeck.

Gopee-Scoon, who held discussions with Wang Ning, stated that the signing serves to deepen the commercial relations between the Government of Trinidad and Tobago and the People’s Republic of China. She added that events like these are significant for her ministry since they open the way for new commercial and foreign direct investments into Trinidad and Tobago, which are fundamentally important to the country’s economic development.

The industrial rark will be financed through a loan agreement with the Export-Import (Exim) Bank of China in the amount of US$104,295,000. Beijing Construction Engineering Group has guaranteed the operations of at least 10 Chinese firms, with interest expressed in the areas of the manufacturing of glass powder, air conditioners and ceramics, paper converting operations, wood processing, communication equipment, building materials, integrated housing manufacturing and food processing. The company has also committed to using 60 percent local labour and purchasing at least 50 percent of the building materials in (T&T), in the construction of the industrial park.

“Once fully operational, the new park would provide space for 60 to 80 factory shells, directly employ over 4,500 persons, with one thousand persons expected to be employed during the construction phase," Gopee-Scoon said, and added that the development of the new industrial park should be completed within 12 months, and one major international investor has already been identified for the site.

She added that the park’s establishment promotes Government’s diversification efforts as it targets firms in the areas of high-value and light manufacturing, logistics/warehousing, and emerging industries such as electronic technology, information technology, energy-saving ecological building materials and biotechnology.

In delivering remarks on behalf of the Government at the signing ceremony, Communications Minister Stuart Young expressed appreciation for the responsiveness of the Chinese Government and its investors, and their reciprocal visit coming one month after the Prime Minister Dr Keith Rowley's visit to China in May. Young highlighted T&T's lead role as the first country in the region to sign on to the Belt and Road Initiative being implemented by the Chinese Government.

Meanwhile, in welcoming the Chines delegation, Minister of Foreign and CARICOM Affairs Dennis Moses expressed the hope that the activity signalled the commencement of a long and fruitful relationship of the signatories in an environment where robust cooperation was demonstrated.

A distributorship agreement between Lake Asphalt and BCEG was also signed, which Energy Minister Franklin Khan said would increase the marketing of the company’s products substantially in the Chinese region. He added that it would transform Lake Asphalt into a more profitable venture with marketing and packaging arrangements in place. Khan also indicated that the Government plans to construct a bitumen powder plant, which would convert the world class bitumen produced by Lake Asphalt into an exportable powder form, and yield significant profits.

During their visit, the Chinese delegation toured the pitch lake and the proposed site for the development a new industrial estate.

Point Lisas a difficult place to do business?

Political leader of the Movement for Social Justice (MSJ) David Abdulah has taken the management of NiQuan Energy Trinidad Ltd to task for what he said was its failure to reach out to residents of Marabella following an early morning explosion at its gas-to-liquids plant at Pointe-a-Pierre on Wednesday.

Down phase of energy sector terminal

ECONOMIST and former deputy governor of the Central Bank Terrence Farrell is forecasting that the present down phase of the country’s energy sector is going to be terminal, and oil and gas prices will never get back to the highs of the 1980s.

“This down phase of the cycle is going to be much longer, and it is going to be in fact terminal as far as crude oil and natural gas are concerned. If we are looking in the near future for some kind of upswing in respect of oil and gas prices, we will see prices going up a bit, but we are unlikely, in my view, to see prices getting back anywhere near, in real terms, to where they were in 1982,” he said.

TRINIDAD and Tobago’s newest fast ferry, the Buccoo Reef, arrived at the Port of Port of Spain yesterday.

The vessel and crew will remain in quarantine and travellers will not be able to use the ferry for about a month.

There are also plans to acquire a dedicated cargo ferry.

Works and Transport Minister Rohan Sinanan and chairman of the National Infrastructure Development Company (Nidco) Herbert George were on hand when the 100-metre-long US$72 million vessel slipped into a berth at the Cruise Ship Complex at 3 p.m.

Innovation in a time of pandemic

The Covid-19 pandemic has brought many challenges, but it has also been the driver of considerable innovation.

One such example of this is Adrian Hassette.