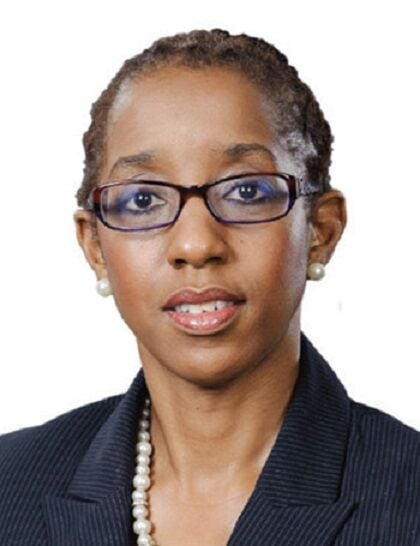 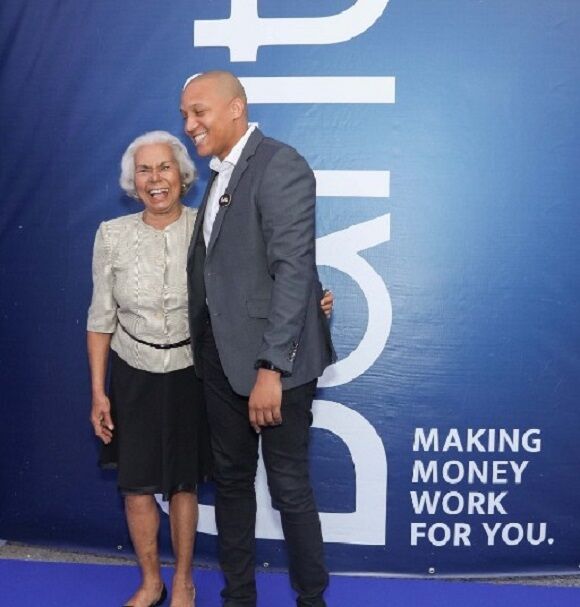 FLASHBACK: Barita Investments founder Rita Humphries-Lewin, shares a laugh with Paul Simpson, founder of Cornerstone Financial Holdings, the majority shareholder of Barita, at the retirement function for the Jamaican brokerage icon in January 2021.

The investment last month in the second APO of BIL, took the FCIS stake in the Jamaican company from 66,280,154 shares before the APO to 90,795,154 shares on September 30, 2021. In percentage terms, the FCIS stake in BIL went from 6.11 per cent before the APO to 7.44 per cent after it, with FCIS remaining the second largest shareholder of the Jamaican investment and brokerage company.

As BIL was looking to issue 125 million shares in the APO, FCIS only needed to buy 6.11 per cent of the APO (or 7,637,500 shares) to maintain its shareholding in the company.

FCB did not respond to a question from the Sunday Express on Friday asking it to explain why it purchased the 24,515,000 BIL shares in last month’s APO, when it was only required to purchase 7,637,500 shares to maintain its 6.11 per cent shareholding.

The FCIS acquisition of shares in the BIL APO is the third block of shares purchased by the local investment bank.

On December 4, 2020, FCIS acquired an additional block of 12 million BIL shares, equal to 1.1 per cent of the company, on the floor of the Jamaica Stock Exchange. That second block of shares was purchased at J$90 a share for a total consideration of US$7.47 million (J$1.08 billion).

The three blocks of shares, now comprising 90,795,154 shares, that FCIS acquired in BIL over a 12-month period cost the local investment bank a total of about US$40.6 million (J$5.86 billion) and would have taken its average cost of acquisition to J$64.54 a share.

The 90,795,154 shares that FCIS owns in Barita Investment were worth US$66.55 million or J$9.81 billion on Thursday, September 30, the end of the 2021 financial year for both FCIS and Barita Investments. That means the value of the three investments made by FCIS in BIL is 64 per cent higher, in US-dollars terms, than the cost of acquisition.

Apart from the capital gain that FCIS has recorded from its investment in BIL, the local company will also receive a significant dividend payment this week.

In responses to e-mails from the Express on April 26, 2021, FCB’s group corporate secretary, Lindi Ballah-Tull said the first two blocks of shares purchased by FCIS in 2020, were acquired in the ordinary course of business.

“This participation in Barita by FCIS was not an investment that would have required additional reporting as, for example, where a company is purchasing equity in another company or entity in order to obtain some level of control (possibly ten per cent or more) in that company or entity,” said Ballah-Tull.

The relationship between FCIS and BIL has developed beyond the T&T company buying shares in the Jamaican firm.

In the Sunday Express of September 5, 2021, it was reported that FCB, the parent of FCIS, facilitated a US$25 million loan to Cornerstone Financial Holdings, which is the majority shareholder and parent of BIL. According to Cornerstone Financial’s draft financial statement for the year September 30, 2020, FCB provided a long-term loan of US$25 million to the Jamaican holding company.

On September 3, 2021, the Sunday Express e-mailed nine questions relating to the FCB loan of US$25 million to FCB chairman, Anthony Isidore Smart, the bank’s CEO, Karen Darbasie, and its corporate secretary Lindi Ballah-Tull. Apart from acknowledging receipt of the e-mail, Smart had nothing to say about the loan.

Cornerstone’s 2019 audited financials indicate that the company had assets of US$414.8 million for the year ended September 30, 2019. Some 96 per cent of Cornerstone’s assets at the end of September 2019, some US$399.7 million, comprised shares in BIL.

The Sunday Express of August 29, 2021, also reported that Massy Holdings board chose a joint bid of FCIS and BIL to provide financial and brokerage advice for the cross-listing of group on the JSE. The cross-listing is scheduled to take place in January 2022.

On Monday last, September 27, BIL posted an allocation notice on the JSE website indicating that its APO, which had an initial target of 125 million shares at J$80 a share, had been oversubscribed.

FCIS acquired 18 per cent of the shares issued in the APO. The APO would have taken BIL issued shares from 1.085 billion to 1.220 billion shares.

In the September 27 notice, BIL paid special tribute to the company’s founder, Rita Humphreys-Lewin, who established Barita in 1977, making it the oldest stock broking company in Jamaica.

“We will assert leadership as we resolve to build on the legacy of Dr Rita Humphries Lewin with unwavering determination to work hard to meet your expectations and create wealth for our clients and shareholders,” according to the notice.

On Tuesday, September 28, the day after the new shares in the APO were allocated, some 38,808,202 BIL shares traded on the floor of the JSE.

Documents seen by the Sunday Express indicate that Humphries-Lewin, purchased one million BIL shares in the APO taking her shareholding from 53,550,974 shares to 54,550,974 at the allocation of shares on September 28.

Those documents indicate that on September 30, Humphries-Lewin owned 26,319,240 BIL shares as at that date, indicating that 28,231,734 BIL shares were sold on September 28, with settlement two days later.

THE potential for big data to transform government is vast and is something that is being actively pursued, according to Finance Minister Colm Imbert.

Trinidad and Tobago’s parallel healthcare system is the only one of its kind in the world, said Principal Medical Officer for Institutions Maryam Abdool-Richards, in an interview with the Sunday Express last week.

A system of parallel healthcare for Covid-19 patients was put in place in March 2020 and was meant to treat Covid-19 patients, while leaving T&T’s existing health infrastructure unaffected.

The Central Bank said yesterday that food inflation in T&T jumped to 5.8 per cent in September 2021, up from 3.2 per cent in January 2021, as it warned of the possibility that the higher prices could carry over to 2022 as a result of external factors.

‘Top cop must keep foot on the gas’

“THE POLICE’S Safe City Initiative seems to be working but tell DCP McDonald Jacob to keep his foot on the gas or it will be hell for us,” said one Port of Spain businessman yesterday.

PRESIDENT of Guyana, Irfaan Ali, called on the private sector in the Caribbean to collaborat…