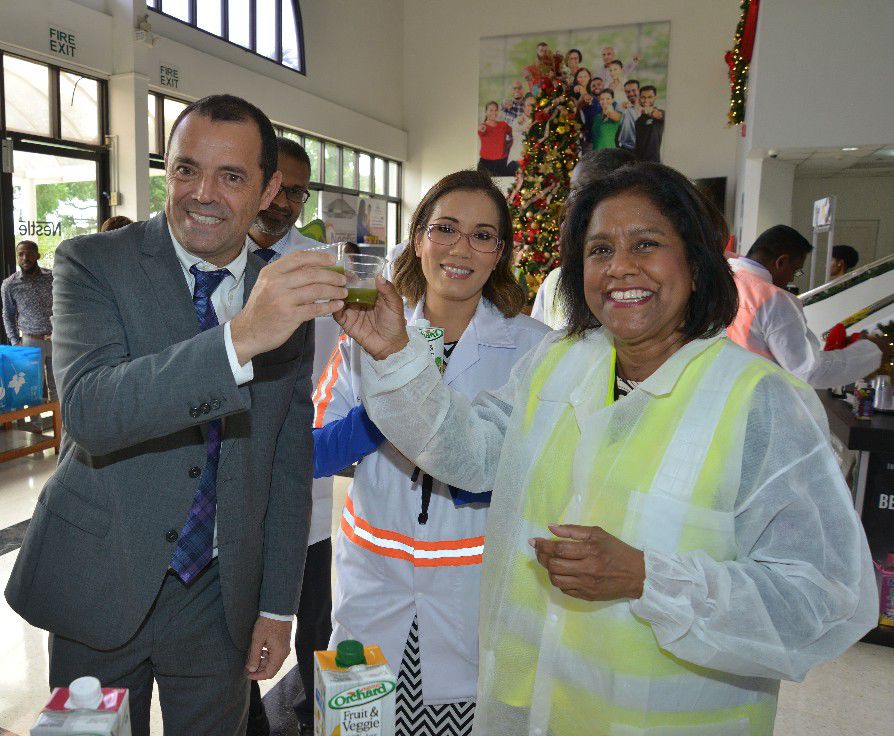 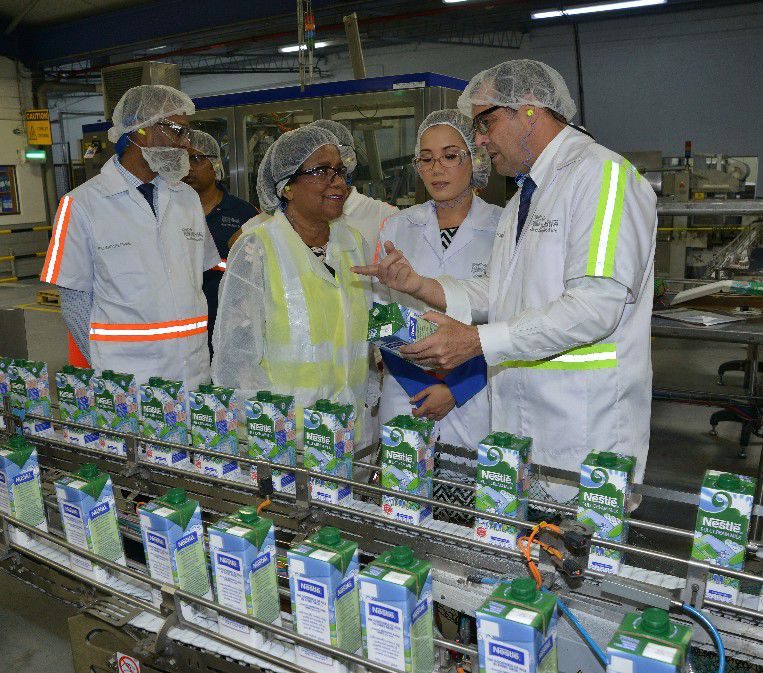 Nestlé is not closing its operations and leaving Trinidad and Tobago.

In fact, the company continues to invest millions in to its operations here and hopes to stick around for another 100 years, says Patricio Torres, head of market for Nestle in the Anglo-Dutch Caribbean.

“We believe we are adding value in the country. Everybody is interested in Nestle continuing in the country because we are providing jobs and we are doing many other things to continue for another 100 years,” Torres said, as he led Trade and Industry Minister Paula Gopee-Scoon and members of the media on a tour of the Valsayn factory yesterday morning.

The Nestle T&T boss said he recently saw a rumour on social media that the company was closing its factory and leaving T&T.

“But this is really not the truth. We are not leaving the country, but we are investing,” he stated.

“We are not saying that we are in the best situation, but we are improving. So that (rumour) is totally fake news,” Torres added.

During the factory tour, Torres noted that the company has invested heavily in upgrading the facility.

Among the new machinery at the factory is a $1.5 million palletiser, a machine that provides automatic means for stacking cases of goods or products onto a pallet, eliminating the need for manual labour.

Torres explained to the Express that employees who once spent hours stacking boxes on pallets now function in other areas of the manufacturing operations.

Saying that opportunities for trade abound beyond the Caribbean market, Torres said Nestle T&T has been developing products of an international standard.

He said in the last year and a half alone, Nestlé’s Anglo-Dutch Caribbean region launched 85 new products.

“Sixty-five of them were produced here in Trinidad with our people, with our labs, with our marketing team, with our ideas,” he stated.

Among them is the recently launched Orchard Fruit and Veggie juices.

“If you see these products we are developing, it’s quite international. I was in Washington last week trying to sell our products in the US and other markets. Because why not? We have international standards with our products here. So we can fulfil the needs of consumers everywhere,” Torres said.

Gopee-Scoon said she was impressed by the wide range of new Nestle products and she expressed pleasure that Nestle was able to retain all its employees.

She said her only concern was that a lot of Nestle’s manufacturing inputs, such as the fruit and veggie mashes, are imported.

“That’s where our focus has to be and this is how we have to help Nestle. In the last budget, in addition to all the incentives we had, we actually brought the taxation for farmers down to zero. It means that we have to focus on agriculture, not only to reduce the food import bill and to give us safer food to eat, but as inputs into manufacturing,” Gopee-Scoon said.

TRINIDAD’S restaurant industry has taken a severe hit due to the Covid-19 pandemic, and will not be able to survive another lockdown.

That is the view of several restaurant owners, who have noted that in-house dining has slowed down significantly, and they are only managing to survive through delivery orders.

All hands on deck, say economists

Trinidad and Tobago is in a depression.

He observed that 2016-2020 were contraction years in the economy, which foreshadows that by the end of 2020, the country’s Gross Domestic Product (GDP) will be 15 per cent smaller than it was in 2015.

Making a Covid living by crochet

BASKET in hand, 62-year-old Laventille resident Frederick “Hunter” Cummings has been selling crochet masks outside Central Market, Beetham Highway, and on the Brian Lara Promenade, Port of Spain as part of his contribution to the national fight against the Covid-19 pandemic.

AS Financial Technology (Fintech) alters the attributes of financial services and market structures, financial regulation is also adapting. Among other things, Fintech products and service providers are streamlining business processes, which allow customers the opportunity to fulfil their financial service requirements through non-traditional online channels which are generally considered to be more user-friendly.

Members of the business community are bracing for more economic fallout caused by the Covid-19 pandemic and are calling for meaningful discussions with Government on the way forward.

The Trinidad and Tobago Chamber of Industry and Commerce launched its annual Champions of Business Awards last week, opening the period of nominations for 2020. The awards programme is a celebration of business excellence in Trinidad and Tobago and is designed to recognise and acclaim the outstanding and exemplary contributions of Trinidad and Tobago’s top business leaders and companies, and inspire others to strive towards the highest standards in corporate life.