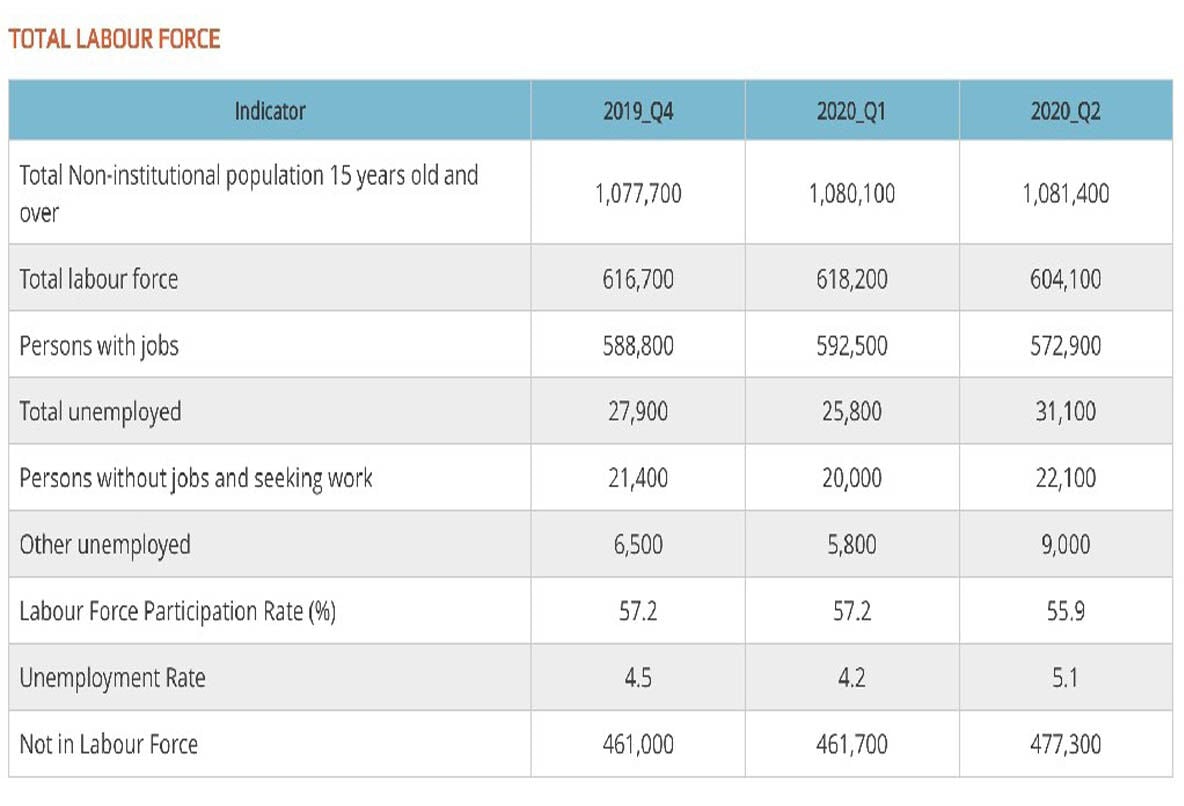 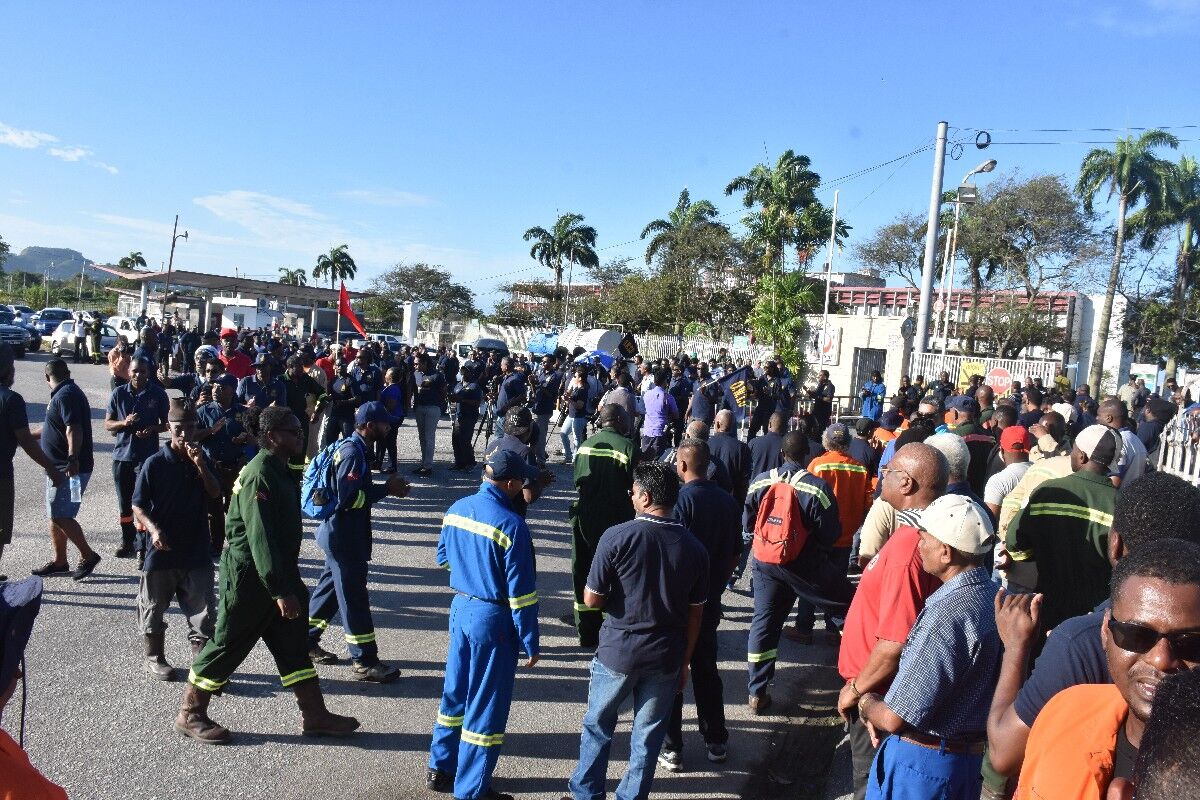 entrance to the Point-a-Pierre refinery during a protest for

entrance to the Point-a-Pierre refinery during a protest for

In the 2021 Budget, Finance Minister Colm Imbert had said the goal of the Government was to boost jobs. But what exactly is the state of unemployment in Trinidad and Tobago? And if this figure is not readily available, how does a Government adequately plan for it to create opportunities for the unemployed?

The salary relief grants, valued at $1,500, were to support workers in the private sector whose jobs were affected by public health measures imposed by the Government in its management of the Covid-19 pandemic in T&T.

The grant covered the period May-July.

“As at September 10, 2021, payments have been made to 6,560 eli­gible applicants. The process continues,” Imbert said in Parliament.

The difference between the number of people applying for the grant and those receiving payments is 15,096 people—all from the private sector in service industries.

There is little data or research to give an accurate picture on these applicants: if they do not receive financial support from the State, how do they meet living expenses? Also suffering from a lack of data and research is the impact the lockdowns have had, or the actual number of people who have lost their jobs or of how many businesses closed their doors and left workers without jobs.

The proposed National Statistical Institute, a proposal in the works for years, is still before a Joint Select Committee of Parliament.

As it stands, the Central Statistical Office (CSO) is the official source of data in T&T.

The last data it posted had unemployment at 5.1 per cent for the second quarter of 2020.

In the category “Other unemployed” in the chart above, the figure stands at 9,000.

In September 2020, the Sunday Express had sent questions to the Ministry of Labour to determine if it had any data on how the pandemic had affected jobs in the country.

In December 2020, they respon­ded: “The ministry is currently preparing a report focusing on the impact of Covid-19 on jobs in the country. Data extracted from the social grant applications lodged at the NIB and the Ministry of Social Development will be utilised in the report. Additionally, reports of the same nature prepared by other stakeholders will be utilised to supplement this report.”

In response to a question from the Sunday Express, Labour Minis­ter Stephen McClashie said: “The Ministry of Labour is not the source of truth on the unemployment statistics in T&T. That is the CSO.”

He said what the ministry does is capture information on job vacan­cies in the public services and retrenchment notices.

The Central Bank of T&T gathers data based on companies being closed. For example, when Petrotrin was closed, there was a speci­fic figure on jobs that were cut and retrenchment notices in the daily newspapers.

Central Bank’s May Monetary Policy Report, published on July 16, observed that “labour market slack continues to pervade the economy despite the partial reopening”.

“Constraints on economic activity were also reflected in the labour market as retrenchments climbed to 2,744 persons in 2020 compared to 1,530 persons in 2019,” the bank said in its 2020 Financial Stability Report, which was published on August 3.

That report noted there was a significant exposure of financial institutions to the household sector.

“Household debt levels contracted for the first time since its compilation (2003) on account of pan­demic-related containment mea­sures and the resultant slowdown in economic activity. Nevertheless, the stock remained high at just about 48 per cent of the banking sector’s loan portfolio.

“Rising unemployment and depressed income levels, exacerbated by renewed restrictions, may have increased the financial sector’s vulnerability to households. While extended loan deferral programmes have helped cushion the immediate shock to banks’ financial soundness indicators, asset quality and profitability may become compromised as loan obligations become due following the end of moratoria,” it said.

In a Newsday interview in 2019, director of the CSO Sean O’Brien had said labour force statistics are notoriously late because of the difficulty to get data.

Labour force statistics, for example, are supposed to come out every quarter—at most, two quarters late. In T&T, they are four quarters behind.

“People think that if the labour statistics are late, it’s just that the CSO isn’t bringing it out. But the CSO can’t just invent the data. We have to collect it from the source and if the source isn’t co-operating, you’re going to have these delays. We can’t give you data that’s not accurate. As you can imagine, accuracy and timeliness war against each other in this business.”

So how does the public sector employment compare?

Public sector workers have been paid their full salaries throughout the pandemic. In his Budget 2021, Imbert said the Government would look to fill all vacancies in the Public Service

“As we undertake diverse approaches to reform key institutional arrangements, utilising an e-governance ecosystem, we will transform workforce human resource management arrangements, we will change budget practices and procedures and we will introduce results-oriented approaches to policy execution.

“Madam Speaker, we have been able to reduce our annual public expenditure to approximately $50 billion, with $10 billion being channelled to the direct Public Service of approximately 62,300 individuals. Furthermore, transfers to statutory authorities and State enterprises account for another 12,000-plus employees.

“As an initial step, and in the context of our constrained revenue situation, we are freezing the filling of all vacancies in the public sector,” he had said.

Imbert, in his Spotlight on the 2020 Budget contribution, said public sector salaries and wages cost taxpayers at least $20 billion a year, or about $1.5 to $1.7 billion a month.

That includes direct charges, appropriated funds, transfers and subsidies, and statutory boards, and excludes the Tobago House of Assembly (THA).

The survey also mapped business closures, with 60 per cent and 59 per cent of low and middle-income businesses closing, compared to 45 per cent among high-income.

The report noted that labour supply was also heavily affected, observing that over the period January to May 2020, only 180 daily vacancy announcements were advertised in the non-energy sector, or half the number for the same period last year when 340 daily advertisements were recorded.

The report noted, however, that recent, high-frequency unemployment data is “unfortunately lacking”, so it is not straightforward to estimate the employment impacts of the Covid-19 crisis.

The survey also showed that Government’s social programmes have expanded, with more people being able to access the measures put in place to respond to the Covid-19 crisis, including food cards, salary relief grants and unemployment and rental assistance. But, the IDB said, there’s also potential to improve targeting as middle and high-income households received social benefits.

The report concluded that the Covid-19 crisis will likely have medium-term economic conse­quences, which could involve sluggish economic growth, increased unemployment, rising public debt and sustained pressure on the country’s external accounts.

“While Trinidad and Tobago has substantial financial buffers—the Heritage and Stabilisation Fund, large public sector assets, liquid sinking funds—to maintain macro-economic stability in the short term, these policies are no longer affordable in the medium term.

“Engaging in economic diversification, enhancing the ease of doing business, improving public sector governance, mobilising non-energy revenue and streamlining government expenditures will be required going forward. At the same time, there is a need to protect the poor and vulnerable from the negative economic consequences of the Covid-19 crisis,” it said.

STATE enterprises in T&T remain a drain on the Treasury, despite several reports by leading local economists calling for their reform.

The United Nations World Food Programme (WFP) says that the climate crisis poses a severe threat to food security in the Caribbean, as vulnerable communities–a vast majority of whom rely on agriculture, fishing and livestock, who contribute the least to the climate crisis–bear the brunt of the impacts with limited means to cushion the blow.

TOURISM Minister Randall Mitchell says he is eagerly looking forward to the return of KLM Royal Dutch Airlines flight to Trinidad and Tobago from Amsterdam tomorrow, as the tourism industry needs the boost in light of the ravaging effects caused by Covid-19.

The board of the Central Finance Facility (CFF) of local credit unions yesterday expressed pleasure that the 2022 budget presentation contained youth entrepreneurship initiatives as these were consistent with proposals submitted by the CFF to the Ministry for Youth Development and National Service.