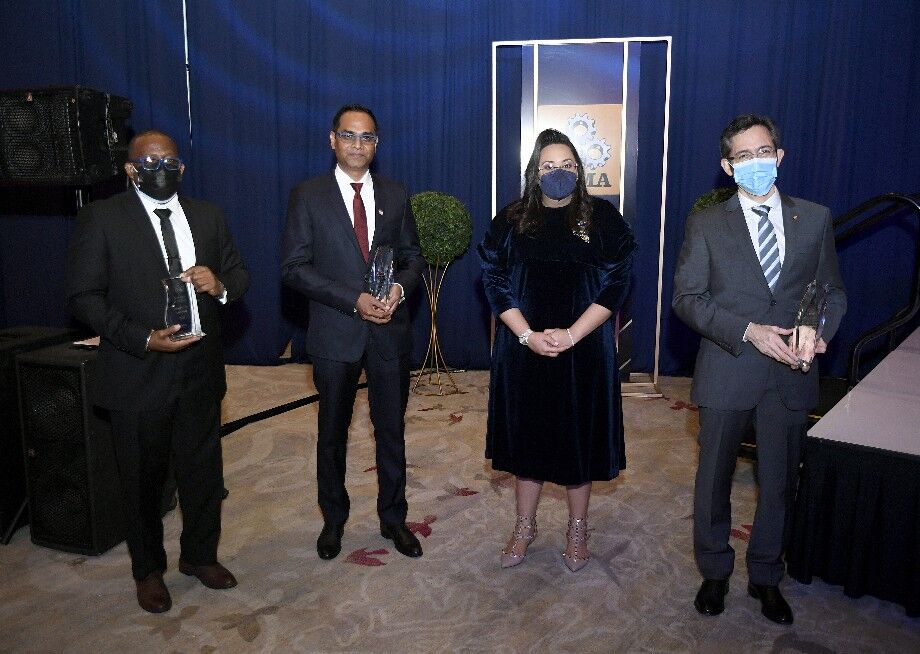 AWARDEES: Tricia Coosal, president of the TTMA, with award winners, from left, Angostura chief operating officer, Ian Forbes, for the Innovator of the Year; Ravi Sankar, managing director of RHS Marketing Ltd, Manufacturer of the Year (medium); and Josué de La Maza, market head of Nestle for the Anglo Dutch Caribbean, for Manufacturer of the Year (large), at the TTMA President’s Awards and Dinner, at the Hyatt Regency Trinidad on Tuesday night. 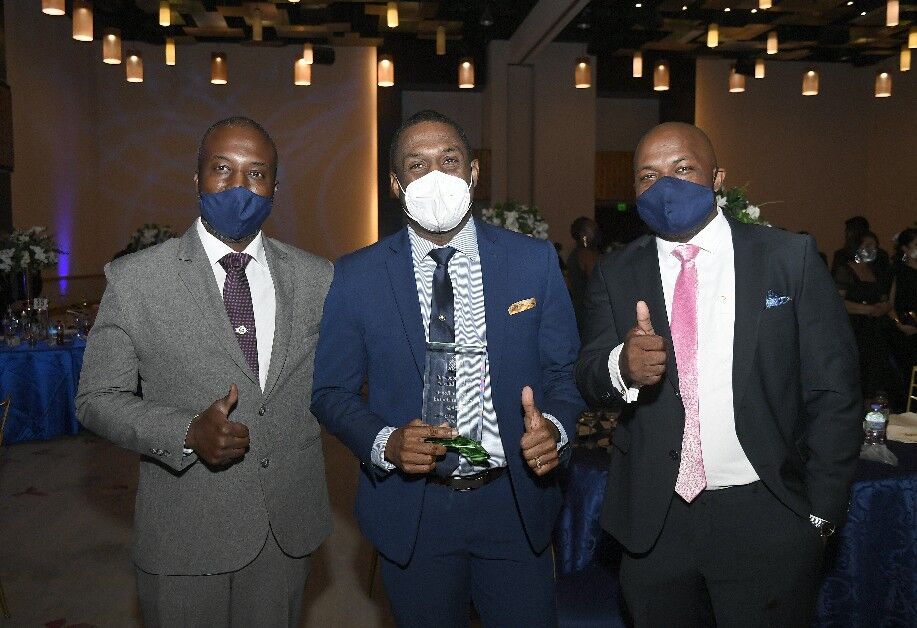 AWARDEES: Tricia Coosal, president of the TTMA, with award winners, from left, Angostura chief operating officer, Ian Forbes, for the Innovator of the Year; Ravi Sankar, managing director of RHS Marketing Ltd, Manufacturer of the Year (medium); and Josué de La Maza, market head of Nestle for the Anglo Dutch Caribbean, for Manufacturer of the Year (large), at the TTMA President’s Awards and Dinner, at the Hyatt Regency Trinidad on Tuesday night.

PRESIDENT of Guyana, Irfaan Ali, called on the private sector in the Caribbean to collaborate to remove the barriers to trade that are impeding the development of regional economies. Addressing the Trinidad and Tobago Manufacturers Association (TTMA) President’s Dinner and Awards function by video conference, he said he would share a document with the association that deals with the barriers to trade in the Caricom, on a country-by-country basis.

“I hope that by sharing this, your association would partner with associations across Caricom in raising your voices, enjoining a collective effort for the removal of these barriers to trade,” said Ali.

In his address, President Ali said he would have loved to have seen much more accomplished out of the Caricom Single Market and Economy (CSME) but that various individual barriers to trade imposed by member countries were stifling the progress.

“Some are nonsensical… some of these barriers imposed can be withdrawn overnight if we are serious about building capacity and opening up opportunities,” he said, making reference also to a document from the International Monetary Fund (IMF) on regional integration that noted that the “absence of a regional body with powers and accountability that can help transform community decisions to binding laws in individual jurisdictions is a key impediment.”

“So it’s not a lack of decisions. The heads are making decisions. It is the responsibility of individual states to take those decisions seriously and implement them.

The Guyanese president also told the audience of manufacturers at the Hyatt Regency hotel in Port of Spain of the relative geographic closeness and strong cultural ties between T&T and Guyana. “There are strong economic linkages” with trade being valued at more than half a billion US dollars in 2020.

He said Guyana imported US$514 million in products and services from Port of Spain, while Georgetown exported US$35 million.

The Guyana head of state, who has lead responsibility for agriculture, agricultural diversification and food security in Caricom, said the region is importing three times more than it is exporting and that the number is higher for manufactured goods which average at seven times more than what is exported.

“So what is lacking? What is causing this gap? Can’t we do this?” Ali asked.

At the ceremony, the Lifetime Achievement Award was given to the late TTMA president Stuart Dalgliesh, who died in September. The award was received by his son.

Innovator of the Year 2020 Angostura

MASSY Holdings CEO, Gervase Warner, yesterday confirmed that the group is scheduled to cross-list its shares on the Jamaica Stock Exchange (JSE) on January 27, 2022.

Massy published an abridged statement on the website of the JSE last Friday “in accordance with the listing requirements of the Jamaica Stock Exchange.”

In the abridged statement Massy describes itself as an investment management/holding company engaged in three main industry portfolios; integrated retail, motors & machines and gas products in Trinidad and Tobago and the wider Caribbean region.

THE COVID-19 pandemic led to a reduction of suspicious financial transactions as a result of a decline in reporting by regis­tered business, according to the 2021 report of the Financial Intel­ligence Unit of T&T (FIUTT), which was laid in Parliament last Friday.

Barita makes major moves in US

Stockbrokerage and securities dealer Barita Investments Ltd yesterday said it had successfully financed “a landmark transaction for Jamaica and Barita”.