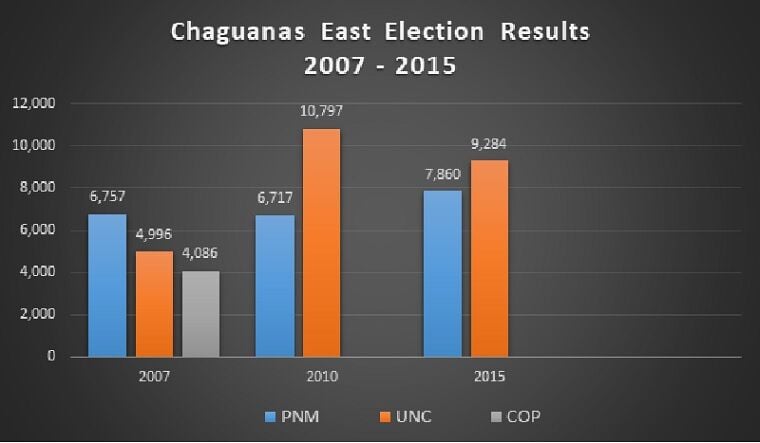 The constituency of Chaguanas East is turning out to be one of the major battle grounds for the 2020 general election, as all the candidates have expressed varying degrees of confidence in emerging victorious.

Historical records show that prior to the changing of electoral boundaries resulting in the former Chaguanas constituency being split into Chaguanas East and Chaguanas West in 2007, the seat was never a good hunting ground for the ruling People’s National Movement (PNM).

The only time the PNM claimed victory in Chaguanas was at the 1971 no-vote campaign, where all the major opposition parties boycotted the election over allegations of fraud related to the voting machines used in previous elections. With a voter turnout of 33.2 per cent, the PNM captured all 36 seats.

Despite its dismal record, the PNM sprang a major surprise when it captured the newly-formed Chaguans East seat in 2007, courtesy Mustapha Abdul-Hamid. But Stephen Cadiz (2010) and Fazal Karim (2015) restored UNC’s dominance, while 2020 candidate Vandana Mohit is adamant that she can emulate Cadiz and Karim, and maintain the UNC’s stranglehold on the constituency.

“I am very confident as you can see and my team is strong and they are ready for August 10.”

The PNM’s Clarence Rambharat, who’s banking on his experience as a Parliamentarian, performance as Agriculture Minister, and his interactions and relationships with his constituents, also expressed confidence in securing the seat.

“I am extremely confident (of victory), but I also say I don't take anything or anyone for granted. I have the experience, the leadership and the maturity. I don’t have to learn this job. This is not a job that I have to learn.”

Reflecting on the fact that his party hasn’t held the seat for the past 10 years, Rambharat said, “I never take anything for granted. In this case, the PNM has not held this seat for ten years, so I expect that we have to work hard.”

He said one of his passions has always been working for the betterment of the nations’ young people, both in interacting with them personally on the ground and in advocating for them in the Parliament.

“When it was time to make strong statements in defence of young people, to give young people hope in the attack on crime and criminals, in dealing with money laundering and those things, I’ve placed strong statements on the Hansard, and I’ve always framed it in reference to where I grew up, the way I grew up and my journey from Rio Claro into the Parliament of Trinidad and Tobago to represent the country.”

However, based on the confidence of Independent candidate Shiraz Khan and the Progressive Empowerment Party’s (PEP) Matthew Gibbs, it appears to be by no means a two-horse race.

Khan, who sees himself more of a home-grown candidate that Mohit, having grown up in the community of Enterprise, said: “I am hoping to be the game changer. I am hoping that in Trinidad and Tobago if it’s one person who could get into Parliament as an Independent to change the thing from being red and yellow, is Shiraz Khan”

Labelling the UNC and the PNM as abject failures and two sides of the same coin, he added that the people of Chaguanas East have suffered under both parties as no development has taken place within the constituency.

“I’m quite convinced that I’m doing something good. I’m bold enough to have the testicular fortitude and guts to stand up against these two big parties with all their big money.”

Campaigning under the motto, “Together we Khan”, he said if the right-thinking constituents gave him their votes then together they can make a difference by being the game changers in the constituency.

And Gibbs, despite being a relative newcomer to the political arena, also fancy his chances.

“I would say my chance in Chaguanas East is about 80 per cent.”

He said his confidence comes from the feedback he’s gotten from people in the community who were quite interested in what he had to say, and were thankful that he and his party represent a viable alternative to the two major parties.

Gibbs declared that he has asked people in his community to don’t judge him but judge the policies he has presented to them, and added that without being bias, a lot of constituents who would have served other parties have come on board with the PEP, saying that the party’s policies are the best policies to save them.

“I grew up in Central Trinidad and still resides in Central, so I’m aware of the lack of infrastructure and the needs of the constituency.”

But based on the views expresses by some constituents, it appears to be heading for another UNC/PNM battle.

A sample survey of 10 Chaguanas East constituents showed five in support of the PNM, four favouring the UNC, and one willing to vote for one of the alternatives.

Among those pulling for the UNC was Richard Albarado, the owner of Dollars Mini Mart.

“I am supporting Vandana and the UNC. Although I’m aware that regardless of which of the parties win I still have to work hard to support my family, I will give my vote to Vandana.”.

Albarado produced a letter he penned to Mohit, which he plans to deliver to her, calling for safety and security, proper healthcare, job opportunities for the youths, a Youth Camp, and addressing the social needs of the elderly.

In his letter Albarado stated, ‘Now is the time to win and unite again, there’s too much trouble in the world.’

And one prominent Chaguanas businessman who asked not to be named, said he can only support the UNC since the PNM has failed in handling the economy of the country.

"They (PNM) have not handled the country's problem properly. Lots of people have their jobs and homes, and some even their businesses.

"The roads have not been maintained, the standard of living has declined tremendously, the middle class has been erased and there are drug blocks all over the community"

The businessman said crime has escalated and some people have resorted to stealing just to survive.

"I view the chances of the UNC as very high, and I believe they're going to win because they are better performers.

"We are on performance and not on race, because we're all one at the end of the day. So it is time that the UNC prove that they are better at running the country than the PNM."

Meanwhile, leather craftsman Stephen Forbes was quite adamant about his choice.

"Rowley and his candidates will win the election. I don't believe in the UNC at all. I was born under the PNM and I'll die under the PNM.

Forbes said Opposition Leader Kamla Persad-Bissessar had her chance and she blew it.

"What she needed to have done was look after the grassroots people not the rich.

"Rowley did not have an easy time in office, so I expect him on winning to look after the poor, and provide hope and a future to the youths."

Stating that politics is a nasty game, Forbes said: "God is the boss and he knows who he wants to put there or who he wants to keep there. So I expect Rowley to get another five years in office."

And another constituent, who gave his name only as Calvin, said he’s definitely voting PNM.

“I can’t say between the PNM and the UNC who will win the seat because it’s only on election day that will be decided, but the PNM has my vote.”

With just one day to go to polling day, it appears that the race for Chaguanas East is well and truly on.