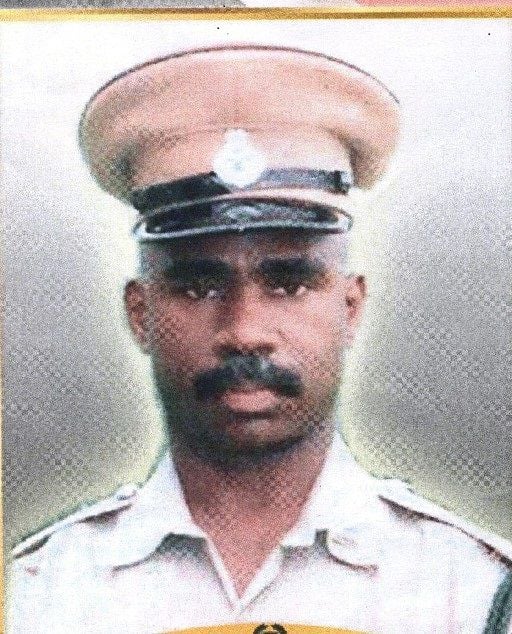 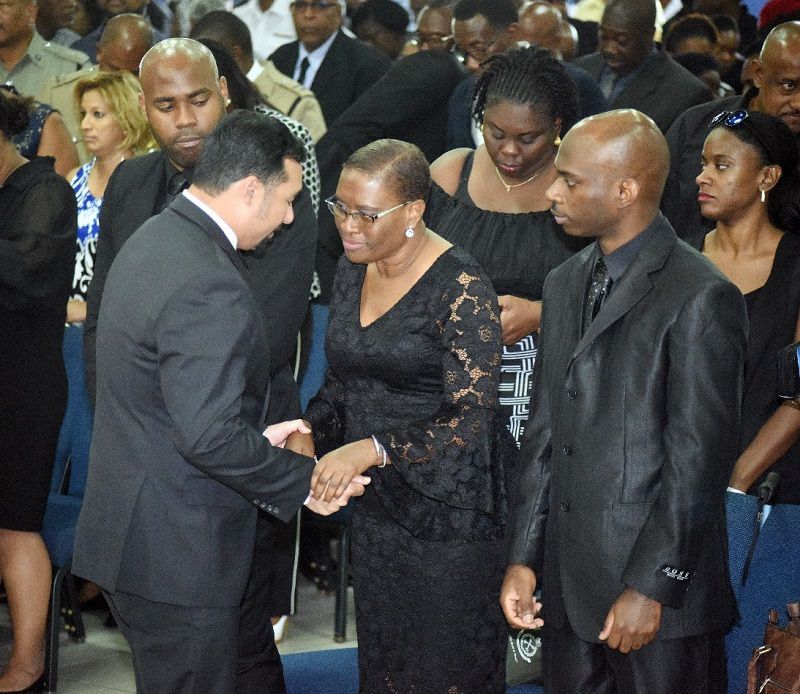 "He was an excellent prison officer.”

Assistant Commissioner of Prisons Carlos Carraspe made this comment while paying tribute to his late colleague Wayne Earl Jackson at his funeral service at Bethel Outreach Ministries, Arima, yesterday.

The church was packed to capacity. People overflowed out into the church’s courtyard and another seating area was created at the back entrance to the church. Even people, including maxi taxi drivers, who could not attend the farewell expressed sadness at Jackson’s untimely passing.

Carraspe added: “He was no rogue. No vagabond. He is a hero.” Carraspe’s “hero” description earned him a standing ovation. Carraspe also said Jackson saw inmates as “humans in a prison.”

They were joined by Police Commissioner Gary Griffith, National Security Minister Stuart Young, Supt Dion Emmanuel, ASP Assistant Supt of Prisons Training, Ricardo Edwards, Assistant Commissioner of Prisons Hayden Forde and Senior Prison Officers including Geopersad Ramoutar, Sherwin Bruce, Felix Alexis and Ferdinand Biddy. Both scripted and unscripted prison officers labelled him a dedicated gentleman and a patriot who was committed to his career, and also the advancement and improvement of inmates and prison officers.

Demonic powers will not attack T&T

Phillip said: “Jackson was a man who loved his wife and children. Honest and friendly. Hardworking. He wanted to do his best. He was a good guy. We need more change agents like him.”

He added: “No demonic powers will rise up in T&T. They will not attack this land. We had a Prime Minister (Patrick Manning) who said “We will beat them in the North, South, East and West. We will have the victory (against bandits). It is not God’s will people should die premature deaths.”

Phillip gave the congregation and country the assurance, “When God shows up. the battle is over. It is how we respond to crisis. Look at Job in the Bible. In the midst of anger, it is easy to forget God. We need anchors in the midst of crisis. There is hope for T&T.”

Phillip had a word of advice for Jackson’s loved ones and colleagues. “Don’t handle it alone. Trust in the Lord. Arm of the Lord is not shortened. When God goes before us, we can’t be defeated. T&T will not go down. God will help us.”

On a more personal note, Cheryl Jackson said she loved his contagious laughter. St Stephen’s College posse said he organised fundraisers. Jackson’s tenor would ring out and he emerged victorious in a Cultural Exchange Programme with Psalm 21. He loved T&T culture and competed and won calypso competitions. Nedra Jackson said he was a “warrior” and, she reciprocated he was her “sweet lump of sugar.” Even Young said he treasured the photographs he had taken with Jackson when he toured the prison.

The programme featured an avalanche of black and white photographs and there was a montage of his milestones including his marriage and family gatherings. After the service, pallbearers tenderly bore his body to Industry Cemetery, D’abadie. Others signed the condolence book. Queues including law enforcement and civilians expressed condolences to Cheryl Jackson and her family at the loss of their patriarch and hero.

The Bocas Lit Fest is celebrating its tenth year with a birthday poster by Jackie Hinkson of the iconic Old Fire Station in downtown Port of Spain, and the National Library, the usual home of the NGC Bocas Lit Fest.

Though immensely popular among young audiences both here in T&T and throughout the region, the local “zesser” Trinidad dancehall movement has been highly criticised for its overly violent and sexually explicit lyrical content.

In this week’s Great Soca Bands instalment, we look at a vocal trio that in the 1990s to early 2000s worked with some of the most significant and popular calypsonians, soca artistes, rapso artistes, and bands of the day. They are arguably the best girl group out of Trinidad then and since.

A jarful of personal promises

Kelline Theophille is creative at heart. It was through nurturing her creativity that she was able to come up with a simple little idea that she turned into a thriving business. After Theophille’s Promise Jars turned out to be just what her closest friends and family needed, she launched her business in 2017, using her idea of celebrating people in a way that was unique and sentimental.

A true friend of animals

Sabira Ali and her family were heading to Barrackpore to check out some animals for the Muslim sacrifice (Kurbani). They stopped at a Masjid and on the walkway she saw a bat about the size of a 25-cent coin. After making a few calls Ali made the decision to pick up the bat for rehab… The rest became history… The bat became yet another addition to her repertoire of animal rehabs.

Mamma Mia is serving a slice of Italy to go.

Like all restaurants in Trinidad and Tobago, the popular Italian pizzeria has been restricted by the national ban on in-dining due to the ongoing pandemic. But Italian chef and owner Mirko D’alessio says their new family meal offerings and classy packaging make it easy to recreate an authentic experience at home.