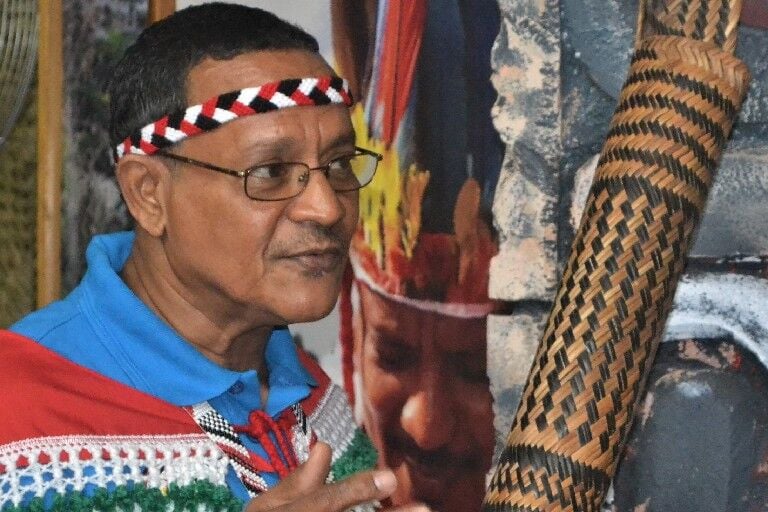 ceremony at the Heights of Aripo this Saturday. 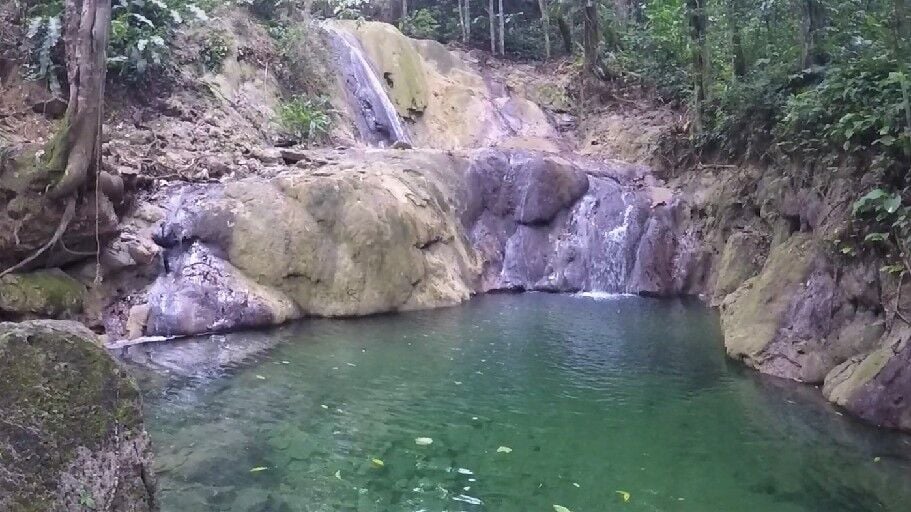 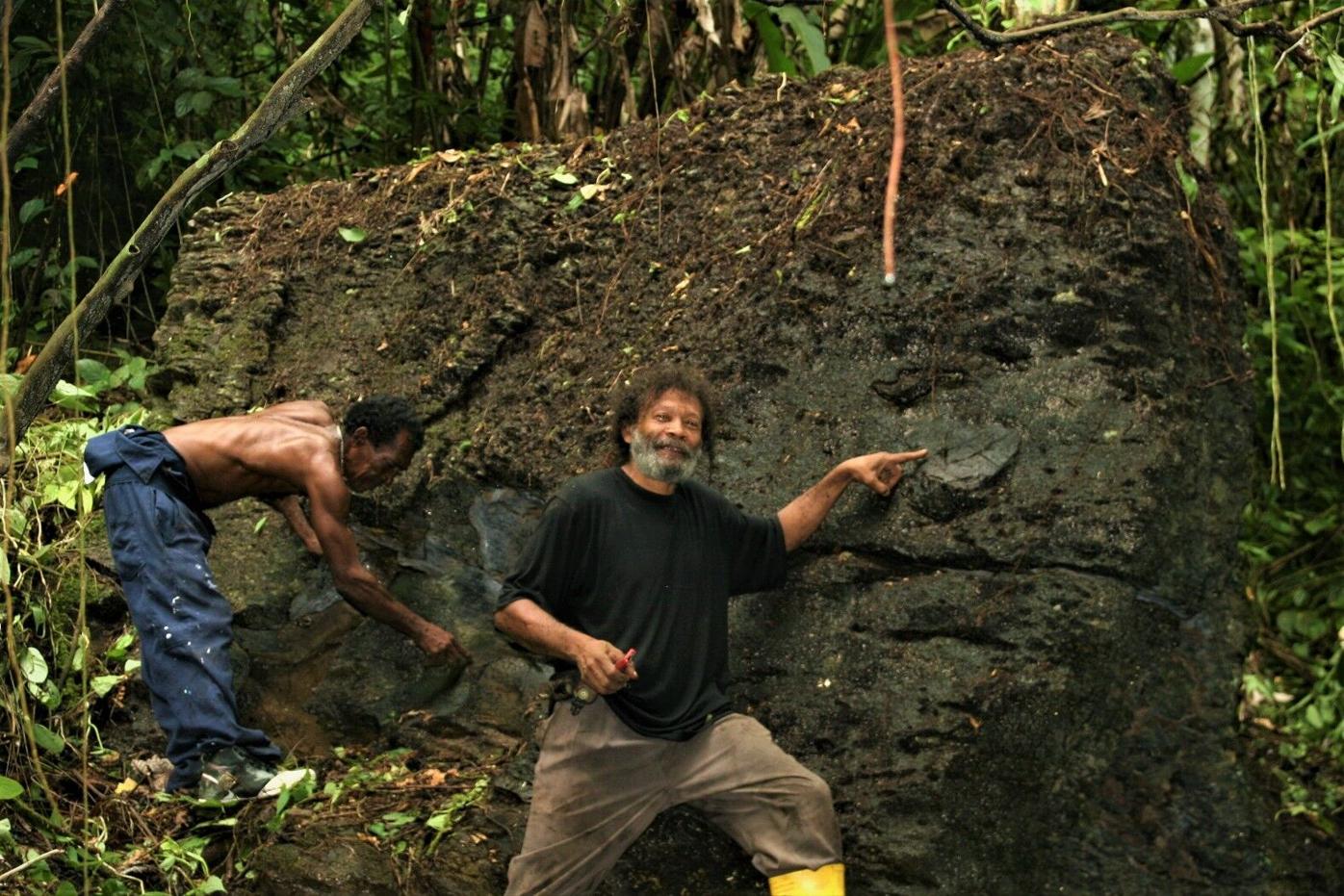 Joseph Charles at the site of the Aripo petroglyph.

ceremony at the Heights of Aripo this Saturday.

Joseph Charles at the site of the Aripo petroglyph.

The name Heights of Aripo will be etched in our hearts and minds for some time to come and, sadly, not in that way that we have come to regard it.

Despite work done over the years to capture and share the spiritual beauty and peace of this part-pristine, part-agricultural valley of the southern face of the Northern Range, in immediate contrast, dark clouds have gathered to overshadow this magical canvas, to compete with the passage of the daily life-nurturing mists that are truly typical of these parts.

Chief of the Santa Rosa First Peoples Community Ricardo Bharath-Hernandez, as a descendent and representative of the first peoples who made these heights their home, is mobilising a spiritual reclamation of Aripo. The community feels there is a pressing need to start the healing process for all.

“In recent times, this heri­tage of the First Peoples is being dishonoured as criminals use its forested areas as a cover for their heinous crimes. With the discovery of the body of Andrea Bharatt and other human remains in the Aripo Valley, the First Peoples are deeply offended at this gross disrespect for human life and the environment.”

On entering the valley of the Heights of Aripo, you feel the imposing strength of the embracing mountains and marvel at the rich biodiversity present in this one space. You could see why, centuries ago, our ancestors made this Eden their home, preserving the balance of this luxuriantly forested environment by living according to their natural code of conservation.

Petroglyphs in the eastern folds of the valley evidence the sojourn of our ancestors in the deep recesses of mini-valleys. One such petroglyph stands on mixed estate land part owned by First Peoples descendant Joseph Charles, great-grandson of Houlier, after whom the area is named.

The area is patrolled by the assertive presence of the mapepire zanana, and it is only the bravery of our First Peoples could have emboldened them to produce drawings onto the stone with such precision with their tools.

El Cerro del Aripo forms the highest point of the continuous Morne Bleu Ridge of the Northern Range at 3,084 feet, or just over 940 metres, and as such is the highest elevation of this country. This has been the inspiration for many residents in the foothills of this revered mountain, and, according to Bharath-Hernandez, it was the flat summit of this mountain that inspired the name given by the First Peoples—“Aripo”, meaning “the flat griddle for baking cassava bread”.

“The Aripo Village is located in the foothills of El Cerro del Aripo and was at one time the home of the Nepuyo people, one of the indigenous groups living on the island during the period of encounter with Columbus. Today, the village is inhabited by descendants of these First Peoples and people of other ethnicities.”

The Heights of Aripo is a historic transit point for movement over to other valleys such as Guanapo, Madamas and Valencia. It is also the favourite haunt of hikers ma­king the gradual climb to the summit of Chaguaramal, another imposing height here and Trinidad’s fifth-highest mountain.

Those engaged in the pastime of caving hike to one or all of three major caverns located in the heights of the valley. These caverns are home to our nocturnal guacharo or oilbird, and prolific bat colonies. It is said the First Peoples harvested the oil from these birds for domestic use. Expeditions to study the survival traits of these nocturnal species are spearheaded on a regular basis to these habitats.

Many people have a stake in the well-being of the Heights of Aripo. It is an outstanding geophysical example of well-watered terrain, with numerous terraces of crystal streams and bathing pools that are always highlights on the itinerary of visitors.

This is also the reason why it is a popular Hindu pilgrimage site as it is revered for its source at the highest point of Trinidad. Aripo River is the site of the Ganga Dushara Festival and Kartic Snan, a bathing ritual observed in holy rivers.

The resident community in the foothills of this eminent water table includes persons of notable standing such as Dr Leroy Clarke, who has nothing short of reverence for El Cerro del Aripo, in whose bosom his home is cradled. According to him, it is where God resides.

He also recognises the importance of the Aripo petroglyph as an important part of our cultural heri­tage and thinks this site should be preserved along with the rest of our archaeological discoveries.

Members of the community regard this their birthplace and heritage as a true representation of this country’s rich biodiversity; this is why they are anxious for the recent dark clouds overshadowing their valley to be dispersed.

Bharath-Hernandez feels their pain and is hosting a spiritual reclamation of the area. “With the support of members of First Peoples and other concerned citizens, I am organising a spiritual healing ceremony to be held in Aripo on Saturday, from 10 a.m. to 11.30 a.m.

“This is in honour of young Andrea Bharatt and all others whose remains were found in the Heights of Aripo, a place which bears the name of our indigenous heritage. This makes it even more urgent for this spiritual healing ceremony to take place, in the name of all that is good and beautiful in this country.”

The dark clouds that shadow the Heights of Aripo are expected to disperse and be replaced by the natural cloak of mists that must be allowed to continue nurturing these heights as it has throughout time.