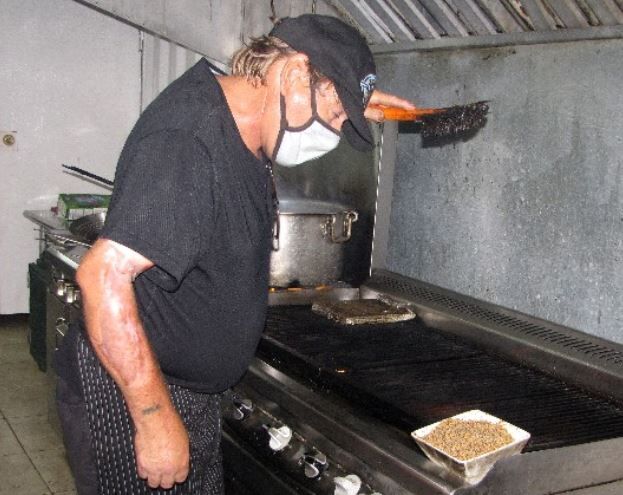 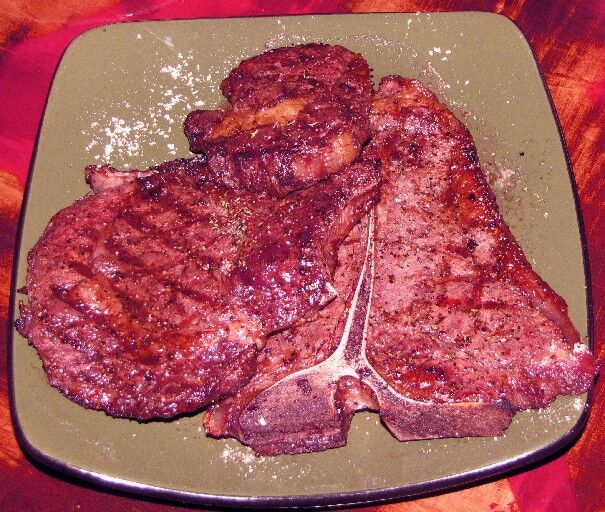 The Irish butcher-cum-steak-master boasted that he has seared over 260 tonnes of meat during eight short years of operation. An animated Grant challenged any chef in the region to put forward a larger number than that when he invited the Express for an exclusive sit-down at his Southern Main Road, Caroni, restaurant.

“There is not a restaurant in the whole of the Caribbean that could say they have done two million steaks. Paul A Grant has done two million plus. I would put my right hand on my heart and say that would be the equivalent of over six containers of meats. That would be 260 tonnes of meat. Nobody, nobody, nobody can say dat, sah,” a passionate Grant said with a roaring laugh his palm firmly pressed to his heaving chest.

Grant first came to the Caribbean for his honeymoon nearly three decades ago. While in Barbados he was recruited by Caricom to consult on regional agricultural reform. In 2012 he opened a self-titled gourmet butcher shop at Alligator Trace, Munroe Road, Chaguanas.

The halal-certified operation quickly became a hit with the large Muslim community in the area. And Butcher Grant soon had to become Chef Grant with repeated requests to show his customers how to properly prepare his prime cuts.

“I realised the people didn’t know how to cook a steak. What I done was you buy the steak and I cook it for you for $5 with garlic butter. And I vacuum-pack it for you and you take it home and you put whatever you want with it. Then we decided to do a promotion with a tasting for the steaks. We did it on a Saturday and never looked back. That was eight years ago,” Chef Grant said with another of his big laughs.

From butcher to steak master

Chef Grant uprooted and moved his operation from Munroe Road to Caroni just over a year ago. The move, he said, allows him to offer a rustic authentic steakhouse dining experience to guests.

“I decided that my customers needed a lot more. I look around and I found here, it has everything—parking, amenities, everything,” he said.

Grant said he always relied on word of mouth and social media to get his business out. That was until he encountered Trinidad and Tobago Restaurant Week (TTRW) creator Shira Mohammed, he said.

“Dealing with Shira has been one of the most positive moves I’ve made. Restaurant Week has a phenomenal impact within the food industry. The coordination and everything else that goes behind it is a lot of work. Now, people will give compliments to the chef and to the restaurant, but nobody would think twice of stepping back and saying thanks to TTRW. People have to stand back and say thank you because without that exposure we would never be,” he said with clasped hands.

Paul A Grant has not been immune to the economic effects of the pandemic, however. He said the initial total lockdown forced him to lay off his entire staff. And now even with the allowance of curbside pickup he has had to rely on his three young half-Trinidadian daughters Briann, Pauline and Erin to keep the doors open.

Understanding the limitations of his market, Grant said he created value-for-money meals designed to feed entire families. His offerings included a choice of two rib-eye steaks or a lamb rack both served with sautéed vegetables, mushrooms, chef salad and chocolate cake dessert. Both choices cost only $300.

“This year (TTRW) was different. Unlike before people’s pockets are not as well-lined as before and everybody has to be careful on what they spend,” Chef Grant said.

Chef Grant will host his annual meat fest on the last weekend of this month (October 30, 31 and November 1) at his restaurant. The restaurant will be totally re-branded during the occasion and will now be called the Paul A Grant Hungry Irishman Steakhouse.

The move will see a diversification of the menu to offer wines and beer on tap. In light of these changes, Grant said he would not be reapplying for his halal certification out of respect for the Muslim community he proudly served.

“Now we’re no longer residing there and it’s time to say goodbye to Paul A Grant Butcher Steakhouse. We represented the Muslim community. But with the pandemic we have to diversify. Some of our customers are requesting wine. So I refuse to carry a halal certificate knowing I’m going to be applying for liquor licence,” he explained.

For the fest, he will unveil two new exciting offerings—The Irish Wolf Hound and The Hungry Irishman. The former, he says, is a meal made for a king and features a T-bone steak, a prime rib and a rib-eye steak. The latter features four sirloin steaks. Both, served with mashed potatoes, mushrooms, fries and salads.

Chef prepared his Irish Wolf Hound for our tasting and I have to say it is truly an out-of-this-world experience. The medium-rare prepared meats were tender, succulent and flavourful. Hands down the best steak I have ever had anywhere in the world.

“Now each one of these meals could feed four people,” a pleased Chef Grant said as he observed our reaction to the food.

So what’s the secret to his quiet success? Chef Grant says it’s simply genuinely loving what you do and putting your all into making it excellent each time.

The North Oropouche River is one of the main rivers draining North-East and East Trinidad. Tributaries from the Northern Range such as Cuare and those from East Central such as Cunapo merge along its course to form a mighty waterway into the Atlantic.

Another weapon in Covid-19 war

MONOCLONAL antibody therapy has been credited with keeping persons with mild to moderate Covid-19 out of the hospital and aiding recovery. This form of antibody treatment is not new. Before the pandemic, monoclonal antibodies (usually administered intravenously as a cocktail) were used to treat cancer, Ebola and HIV, but it shot into the limelight in October 2020 when then-US president Donald Trump received the experimental Regeneron antibody cocktail.

THE card that millions of people use to prove their identity to everyone from police officers to liquor store owners may soon be a thing of the past as a growing number of American states develop digital driver’s licences.

Our best line of defence

VACCINES are on everyone’s minds these days; a simple Google search of “Covid-19 vaccine” will yield more than one billion results. But how many among us gave much thought to vaccines before the coronavirus pandemic? And yet, vaccines have been our best defence against infectious and deadly diseases here in the Caribbean for more than 60 years.

Features/Entertainment Editor “A candle loses nothing by lighting another candle.” James Keller.

Possibly Jamie Thomas’ final post on Instagram, Jamie would succumb to a heart attack later that night, leaving all who knew him in shock and grief.

Jamie lived that Keller statement, being the proverbial candle that lit hundreds of lives in the 46 years he lived. And live he did.