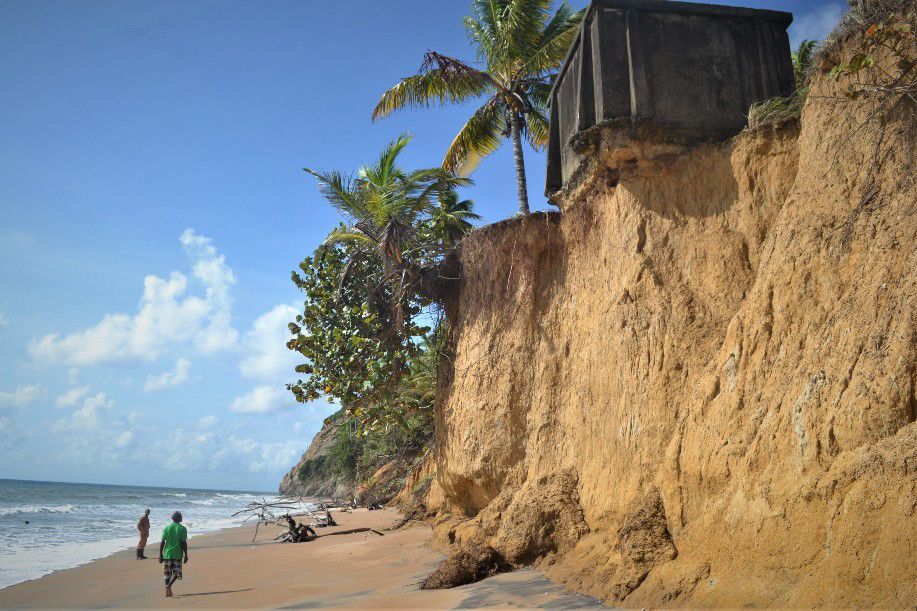 ON THE BRINK: A large concrete water tank that was part of old estate property now perches treacherously on the brink of a collapsing cliff. 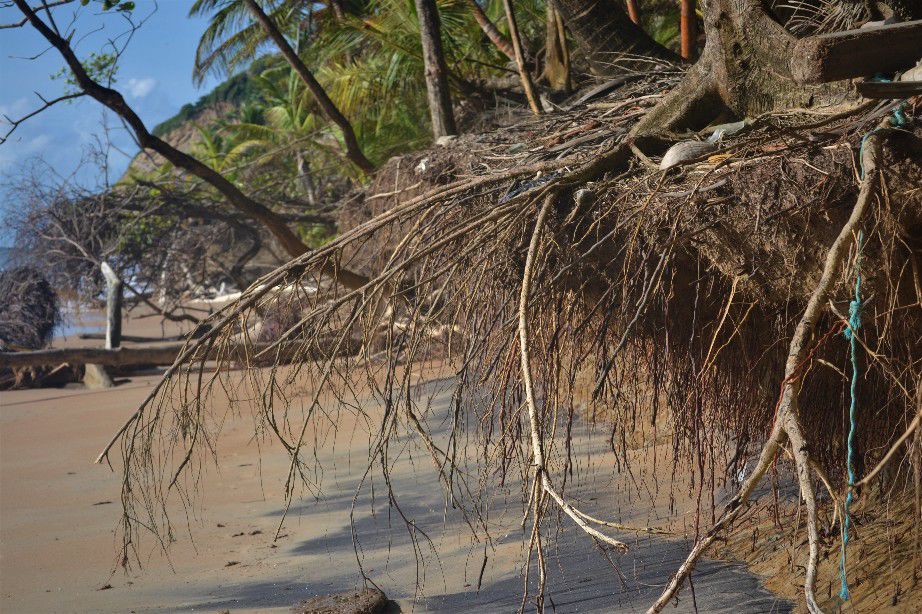 ON THE BRINK: A large concrete water tank that was part of old estate property now perches treacherously on the brink of a collapsing cliff.

As Trinidad’s coastal areas are being battered and broken by heavy surf and swells such as the high seas events of two weeks ago, scenes of utter devastation continue to amaze those who take landforms and landmarks for granted.

The south-east coast from Guayaguayare westwards is exposed to the mighty surges of the Atlantic Ocean coupled with the currents of east South American waters merging from the south-east.

According to communities in the Trinity area, when the La Caille natural reef off Point Galeota was burst to facilitate pipelines, already vulnerable conditions were exacerbated by the resulting exposure of the coastline west of it.

“Our fishermen used to swim out to the reef and stand on it but now when boats take you there, you can’t even reach down to where it’s supposed to be.”

A walk along the coastline west from Trinity during low tide reveals the stunning truth of the processes of erosion occurring here.

At low tide, trunks of coconut trees and others lie across the sand with their shallow crown of roots rearing into the air.

Overhangs defy collapse where roots still try to cling and hold the soil above a now empty space below. Some reach outwards but grasp only air outside the overhang.

Where cliff sides descend steeply to the ocean, you walk on stretches of fallen boulders, both large and small, that form their own rocky beach. Smaller fragments continue to heap as newer debris below landslips.

Estate elders such as Cummings and Spirit, who have been resident in the area for over 50 years, now share their stories on the fast disappearance of vast tracts of the coastline before their very eyes.

“Since being here for 50 years and more, it is more than an acre of land that has been claimed by the sea. Since they burst the reef to run the pipeline it started. When you talk about an acre of land to seaward along a strip right down the coast, that is plenty acreage.”

“There was an oil well on the land some decades ago about 20 feet from the shoreline, and from then till now it ended up about 75 feet into the sea.”

“Where people used to just walk down the slope straight onto the beach, there is now a steep drop. The water beats onto the new ‘cliff’ when the tide is high.”

Spirit told of a flat where they used to plant dasheen but now that’s gone. The spring that supplied everyone with potable water is also gone.

Cummings showed an old water tank that serviced 86 acres of estate. This large concrete structure is now perched halfway on, halfway off a collapsing cliff. The tank used to be about 100 feet from the sea and was part of an area where there were estate houses and barracks.

“There was an estate road running straight through with houses on both sides. That road was to be the continuation of the Trinity line to go to the Three Sisters, but that was stopped by the owner of the estate.”

The tank is the only item left to show that there was an active estate in the area back then. Now it is perched on the brink of a cliff about 30 feet above the sea and, by the looks of it, is about to collapse with the next series of tidal surges.

Tides rise and fall at a fast rate along this coastline so exploring its length is short-lived. More observations will be communicated to readers when the next full moon tide recedes.

Lost and found cycle of erosion at La Lune

Taken by the sea

La Retraite is that part of Moruga referred to as “over the spring bridge”, for it is indeed…

TRINIDAD is shrinking. On every coast, the ocean is clawing at the land.

Eliminating hepatitis B among mothers and children

THE proportion of children under five years of age chronically infected with hepatitis B (HBV) dropped to just under one per cent in 2019 down from around five per cent in the pre-vaccine era (the period between the 1980s and the early 2000s), according to new estimates from the World Health Organisation (WHO).

Kristof West has many inspiring stories to tell.

At just 20, West, a budding filmmaker and photographer, is eager to hold his mirror to local society and reflect the positive energy he sees from his people every day. It’s a desire, he says, that is fuelled by his passion for T&T and its rich culture.

AS entertainers wait with bated breath to receive the green light to resume life as they know it, nothing, not even these uncertain times can stop the creativity that is unfolding behind the scenes.

THERE are few comfort foods quite like a hot cup of cocoa on a rainy day. We have the ancient Mayan and Aztec civilisations to thank for that.

Thousands of years ago, the Aztecs learned the value of the cacao beans from the Mayans who considered it the fruit of the gods. They removed the beans from the pod, fermented them, laid them out to dry and then the beans were grounded into a paste. Water and chilli pepper were added and the result was a bitter tasting cocoa drink.

Sunday READINGS with the stars

Building up to the virtual presentation of T&T’S 2020 literary festival, September 18-20, the NGC Bocas Lit Fest returns with Season 2 of Bios & Bookmarks, the weekly literary conversation that is livestreamed on Facebook, 3-4 p.m. every Sunday between 9 August and 13 September.