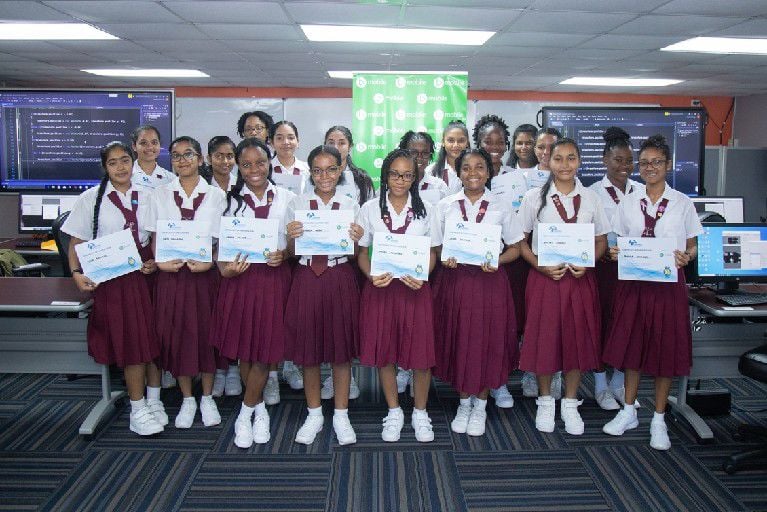 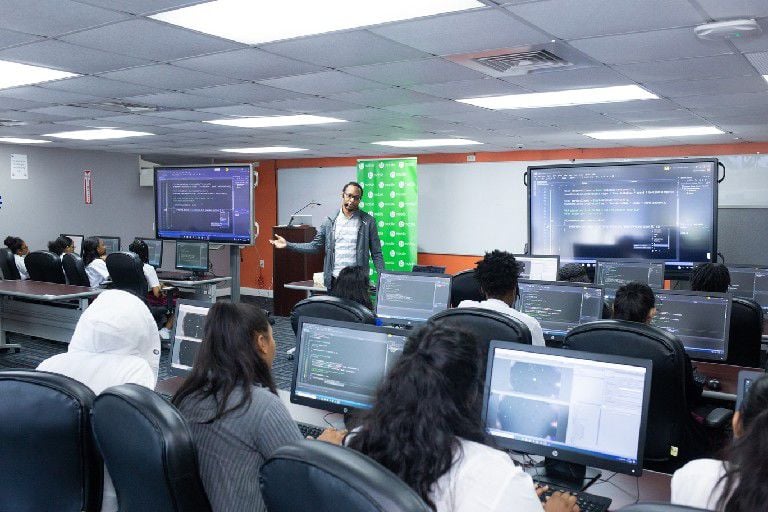 CLASS IN SESSION: Pupils listen attentively as ICT technologist John Bain guides them through one of the key sessions.

CLASS IN SESSION: Pupils listen attentively as ICT technologist John Bain guides them through one of the key sessions.

Communications solutions provider bmobile has once again partnered with CARIRI to secure the tech future of Trinidad and Tobago and empower young women to play an active role in its development.

At the Microsoft Innovation Centre in Freeport, the young leaders took part in an interactive, theoretical segment on coding, facilitated by CARIRI’s ICT technologist, Che Achoy. Intrigued, the pupils were then guided through a step-by-step process on building their own two-dimensional game by another experienced technologist, John Bain.

Bain led an educational and fun segment with the students on their introductory journey through the fundamentals of coding by using Visual Studio IDE (complete development environment for building web, mobile and desktop applications) and Unity (a development platform used to build interfaces and create two and three-dimensional experiences for multiple applications). The pupils also incorporated ICT, computer science and science, technology, engineering and mathematics (STEM) in their construction of the demo game.

“Bmobile’s involvement in educating students in ICT and coding is geared towards encouraging innovation and increasing participation as we attempt to elevate interest in new and emerging trends. As an ICT-centred organisation, we are committed to motivating our young citizens to reach their full potential, ensuring they are academically balanced and better prepared to face the rapidly advancing world of work,” explained Ramesar-Soom.

One form five pupil expressed pleasure in being a part of this initiative and was greatly appreciative to be exposed to such a modern teaching strategy. Although the attentive pupil has not yet decided on which career path she intends to pursue, she admitted that such a programme was crucial to those who are currently in the transitional stage of selecting tertiary and occupational options.

“I like this type of platform where we are removed from the classroom and not tied to a textbook with a teacher speaking to us. Being able to do it ourselves and apply what we’ve learnt, doing the practical and seeing how it’s applied to our everyday lives plus getting a chance to build a game is something young people can relate to. It was a very hands-on approach and something that you won’t forget. Many thanks to CARIRI and bmobile,” the youngster explained.

Meanwhile, IT teacher at the Penal institution, Sunita Gopie-Lochan, was also actively involved and credited the workshop on its dexterity. The experienced tutor was equally amazed when she learned of the many ways ICT and coding played an integral role in different occupational fields such as fashion and entertainment.

“This programme brought to life what they have been learning in the textbook and the practical aspect of them using games to teach the coding was fun for them. It is a great developmental step for them going forward. Not only in IT, but just the idea of providing them with problem solving and critical thinking skills that they can apply in everyday situations. It gives them an idea of what the future holds,” stated Gopie-Lochan.

Prior to Bain’s practical session, Achoy delivered a series of bite-sized lectures combined with kinaesthetic segments, which were then applied to their game development. Here, the bunch used the same tools employed by some of the biggest development studios today such as Blizzard, Nintendo, The Pokemon Game Company and Square Enix.

Bain lauded the programme’s relevance to the current shortage of ICT employees around the world. He made clear that coding was not just for computer engineers, but also needed the skills of psychologists, biologists and even dance teachers to be implemented in the realm of robotics.

“This is an inspiring push towards bringing children into this arena. The reason companies like bmobile and ourselves get into it is because we see a need for it. We foresee that there’s going to be a gap in the future as the world is progressing so fast, there is not going to have enough people within computer science to bridge that gap. By us taking this initiative and setting up seminars as these, we are trying to level up our students/youth so they would be ready for this change starts to take effect and impact us,” he concluded.

Caught up in coding

Taking the Divali Nagar on to virtual platforms

As with everything else, Divali 2020 come November 14 will be quite a different experience the world over, more so for us here in Trinidad.

In January 2020, no one could have predicted how the year would unfold, or how rapidly COVID…

Gentle giants of the African savannahs

Giraffes are one of the most iconic animals on our planet! They are known for their unique brown spotted coats, towering legs and long necks. These giants are quite popular, have won over the hearts of many and are often depicted in stories, cartoons and children animations.