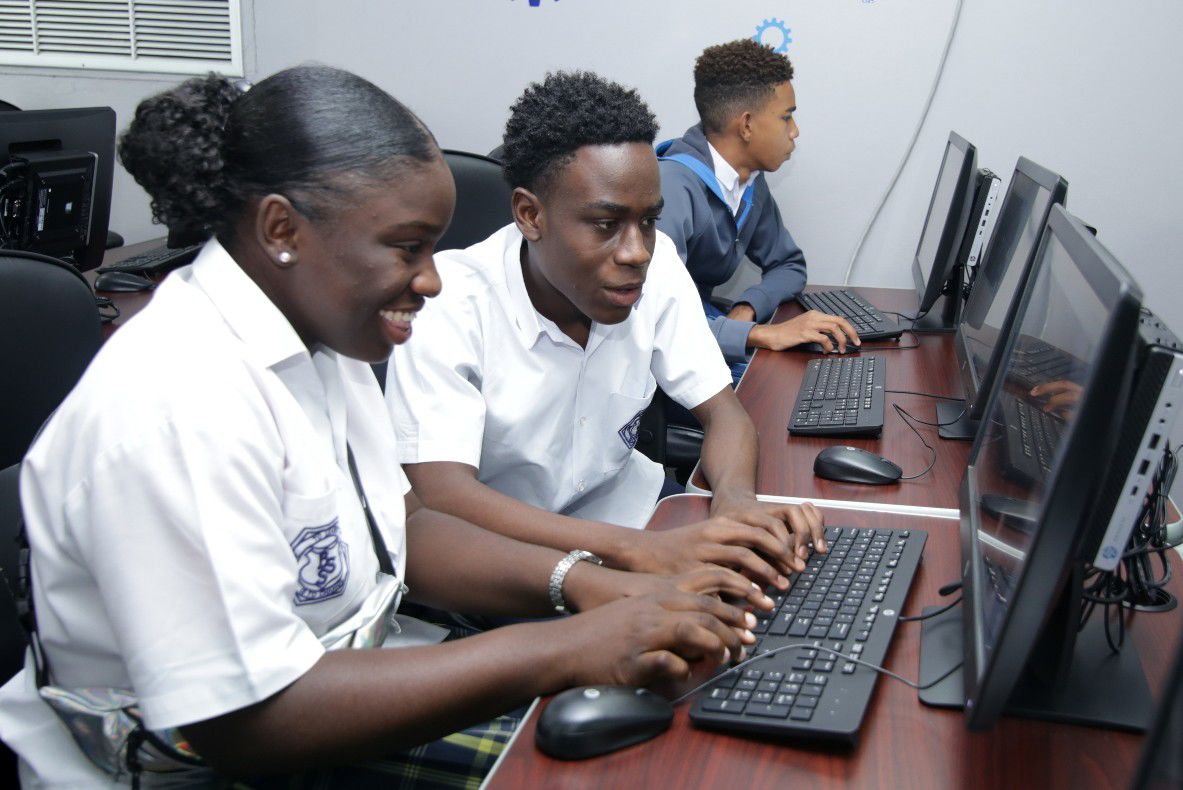 Working together during the coding session. 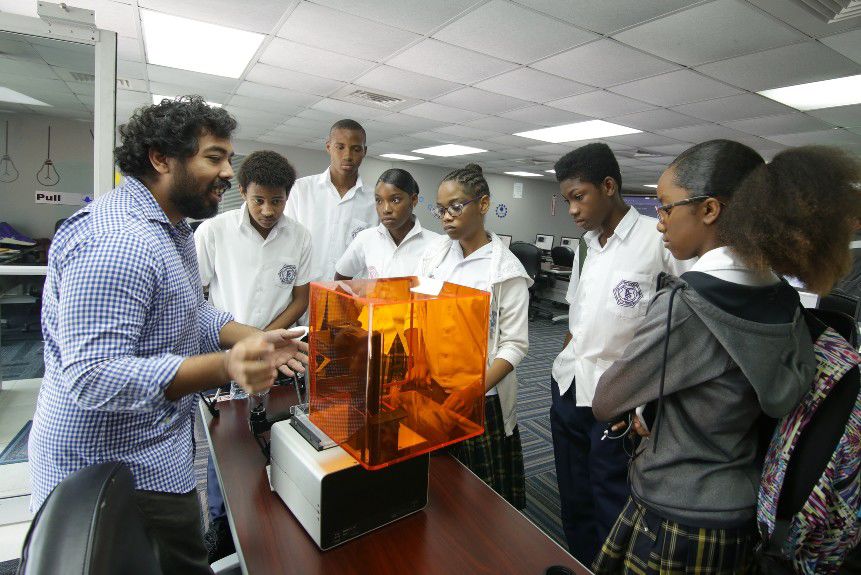 Che Achoy demonstrates of the use of a 3d Printer and its output. 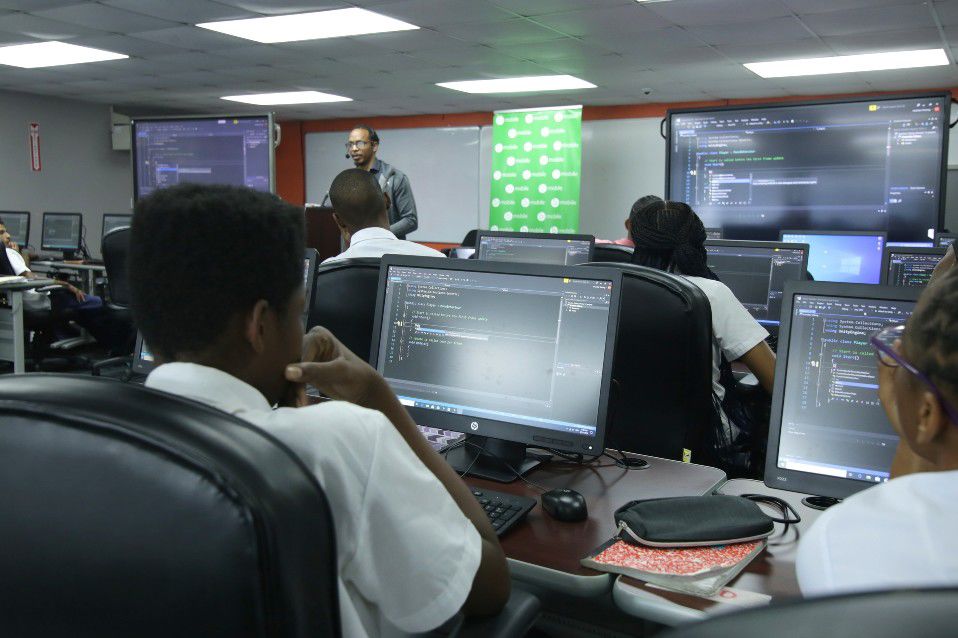 Working together during the coding session.

Che Achoy demonstrates of the use of a 3d Printer and its output.

Communication solutions provider bmobile has partnered with the Caribbean Industrial Research Institute (Cariri) and the Ministry of Education to administer the Coding Fundamentals for Secondary Schools Programme.

Altogether, Information Technology pupils and their teachers from Belmont Secondary School participated in a detailed one-day introduction to coding via hands-on exposure to computer science and Information and Computer Technologies (ICT).

At Cariri’s headquarters on Innovation Road, Freeport, the enthusiastic bunch was introduced to coding fundamental techniques and then taken through a step-by-step process on game development by Cariri technologists Che Achoy and John Bain.

As the national provider of communications solutions and technology services, bmobile felt that it was vital to be a part of this initiative which aims to assist pupils, developers, IT professionals, entrepreneurs, start-ups and academic researchers to develop and deploy innovative software solutions based on Microsoft technology.

“Education through ICT at a tender age provides a solid foundation for upcoming small and medium enterprises/entrepreneurs,” stated Anjanie Ramesar-Soom, TSTT’s manager, corporate responsibility and community relations. “As an ICT provider, we are aware that in this particular industry, there is a deficit of the human resource. By introducing these aspects of ICT to our young people, we are aiming to stimulate the growth of industries in Trinidad and Tobago so we could support more coding professionals and further develop the economy.”

Through its many corporate social responsibility initiatives, bmobile, alongside Cariri, has boldly taken a stance to expand the mental and technological capacity of the next generation of leaders. ICT and coding are now being implemented by farmers, painters, designers and several other occupations which have now gravitated to using more computer-oriented assets which reduces down-time, saves money and eases the workload on employees.

According to lecturer Achoy, introducing these modern techniques at such a crucial age is key to long-term development of our most integral asset, the human asset.

“We are preparing them for the fourth Industrial Revolution where more industries are implementing ICT. Coding, into STEM, isn’t just about computer science. Most of it is about logic and problem solving. Those basic logic and problem-solving skills can be universally translated to multiple areas of disciplines. That’s why Cariri, as a science organisation, and bmobile, as a leading provider, chose ICT because it’s multidisciplinary and now applies to all job industries.”

The second edition of the Coding Fundamentals Programme is scheduled to conclude this month. At the first staging in 2018, Cariri and the Microsoft Innovation Centre targeted 20 secondary schools, with over 400 students receiving training in coding. In 2019 they covered over 26 schools and with the aim of doubling their trained students.

Following an action-packed day of coding and the construction of a game via these processes, Belmont Secondary’s Teirl Thomas expressed how elated he was to participate in the programme.

“This course has opened my eyes to see how we can use ICT to make our lives and even our jobs easier,” he said. “I was impressed that we were able to build a game from our computers and it worked! This programme has aided my academic growth and unveiled what lies ahead in the world of ICT. It’s amazing what computers can do to make situations simpler and more understandable. This is a great foundation for us students moving forward into the world of work.”

Cariri’s marketing officer, Alicia Williams, also noted that there are many small and medium enterprises which are still unaware of the many benefits ICT brings to an organisation. Having teamed up with bmobile and the Ministry of Education, Williams was pleased that the fundamentals taught were strategically aligned with the current school curriculum.

She concluded, “It’s about changing the way you think. To bridge this gap and help the situation, we decided to target the young people. This programme is also done in collaboration with the Ministry of Education so there are linkages with the CSEC and CAPE curriculum. The students will be learning foundation skills that are transferable even if they choose to do IT in university.”

“Longevity is not about a hit; longevity is about the act of putting out something with substance and then you don’t need to say much after.”

So said soca stalwart Shurwayne Winchester to thousands of eager fans logged on to his live virtual concert stream on Sunday.

Decades ago, when a profusion of coconut palms and almond spreads graced the beach area of N…

Since Facebook acquired WhatsApp in 2014, users have been concerned over their personal info…

The World Health Organisation chief appealed on Friday to makers of Covid-19 vaccines and the wealthier countries buying them to “stop making bilateral deals,” saying they hurt a UN-backed effort to widen access to the jabs.

To stargaze from a melody

D Piano Girl Johanna is best known for her soca piano instrumentals—which she continues to create. But fans of the classically trained pianist are revelling in her latest original composition, “Stargaze”, which is a mix of classical and contemporary with some trap music elements. The music video is unlike anything that has been done previously. It was filmed on location at the historic Chaguaramas Tracking Station.