The Best of the Best: Trade and Industry Minister, Senator Paula Gopee-Scoon, joins this year’s Champions of Business, sponsors and representatives from the TT Chamber to celebrate their big moment. 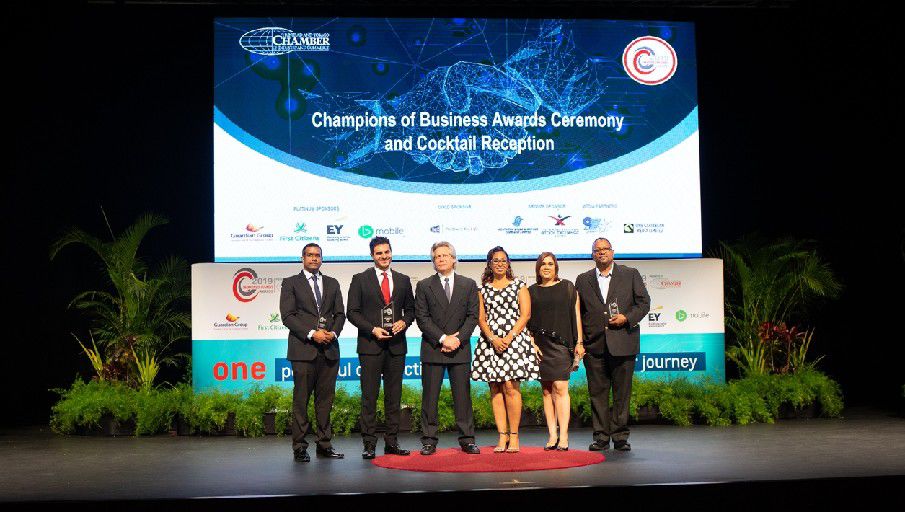 The Best of the Best: Trade and Industry Minister, Senator Paula Gopee-Scoon, joins this year’s Champions of Business, sponsors and representatives from the TT Chamber to celebrate their big moment.

At the start of 2015, Oliver Sagba founded Term Finance Holdings Limited, a web-based credit and loans operation based in Port of Spain, with just two people—himself and another employee. Nearly five years later, Term Finance has a staff count of 15: 11 in Trinidad and four are country managers based in Guyana, Jamaica, St Lucia and Barbados. Nick Farah, who specialised in modern banking technologies at RBC in both Canada and Trinidad, joined the team the following year as regional manager, in what was a significant capture for Sabga’s start-up. On November 15, Sabga and Farah won the coveted bmobile Business Technology Award at the TT Chamber’s Champions of Business Awards.

Term Finance’s growth and success are down to their hard work and ingenuity, but they credit bmobile’s architecture and framework as contributing hugely to both. The team manages TT$60m a year in loans, and it achieves on behalf of its clients a strike rate of 80 per cent. Those are impressive numbers, especially since they run a 100 per cent virtual operation. There is no shop front, no walk-in office. It has never had a face-to-face meeting with a single customer.

“In any given month we’re disbursing over a thousand loans”, Sabga says.

“If you actually trace what is required operationally to handle a thousand customers face to face through a shop front every month, we wouldn’t be able to do that with 15 employees”.

Technology enables Term Finance customers to access their service through a website, and the robust, secure ecosystem that bmobile has contributed significantly to developing, plays a major role. As the company presses forward with its own transformation into an agile broadband provider, it has expanded its suite of services to include not only voice and data but security and entertainment along with data centre, procurement and cloud services to local businesses.

With this mission in mind, bmobile has always been committed to seeing Trinidad and Tobago surpass its potential. So it is important that it supports organisations and projects that celebrate excellence, especially in business and technology.

Term Finance was one of three finalists for the award. The others were Caribbean Airlines, which has completely revamped its operations digitally, and Vibrant Technology Solutions Limited, specialists in ICT project management and ICT services.

No one at the company had a hand in picking the winner, but bmobile was the technological backbone of all the operations.

Ian Galt, TSTT’s general manager Enterprise Services, was full of praise for all the companies for the major strides they took in integrating technology into their operations and accepting the responsibility of being the architects of the future. He commended the gutsiness of Term Finance.

“You could argue that banks already had an online presence, but in Oliver’s case, he literally created a business. Using technology, he said, ‘I’m going to go for it’.”

Even their (Term Finance) technical relationship with bmobile was managed remotely. The absence of a brick and mortar operation was not a hitch, but an advantage in some respects.

“Many companies when they think e-commerce, they think retail… Amazon being a case in point,” Galt continues.

“Gone are the days where I need to go borrow a quarter of a million dollars Capex to buy equipment.”

Term Finance and bmobile reflect a happy marriage of need and provision. Sabga’s own growth trajectory tracked with the flexibility of bmobile’s offering. According to Galt, the beauty of their cloud computing model is that it allows companies, from low number employee operations to high number ones, to grow. Or it can allow others that do seasonal business to reduce their numbers during off-peak periods. That flexibility also extends to what Galt describes as “SoHo”—Single Owner Homeowner businesses.

bmobile and the future of business tech

Research shows that within the next five years or so, every company will in some way be—at least in part—a software or tech company, as most businesses go through the process of digitisation. This goes hand-in-hand with a recent report by the International Data Corporation which suggests that by 2022, 60 per cent of global GDP will come from digital organisations.

“We have a very high mobile penetration, good broadband connection and a large fibre footprint. Our bang for buck is excellent as a country,” Galt declared.

Can a company run a virtual operation and maintain good client relations, without being able to see “the whites of the eyes” of its customers? It can.

“You can have 30 minutes with a customer face to face, but I can guarantee that we know a whole lot more about that customer than you can get face to face” Sabga says.

“Technology has enabled that.”