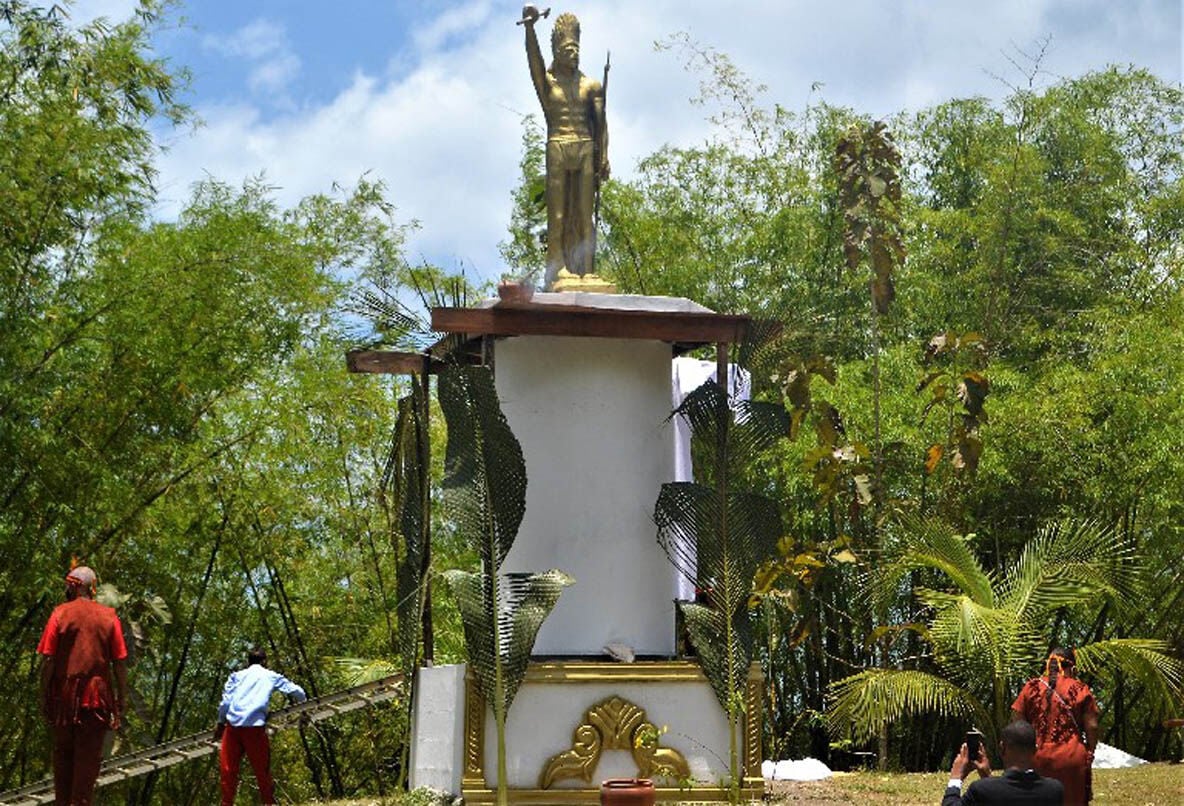 to the First Peoples stands atop

Rock River Hill, one of the highest

points along the Moruga Road. 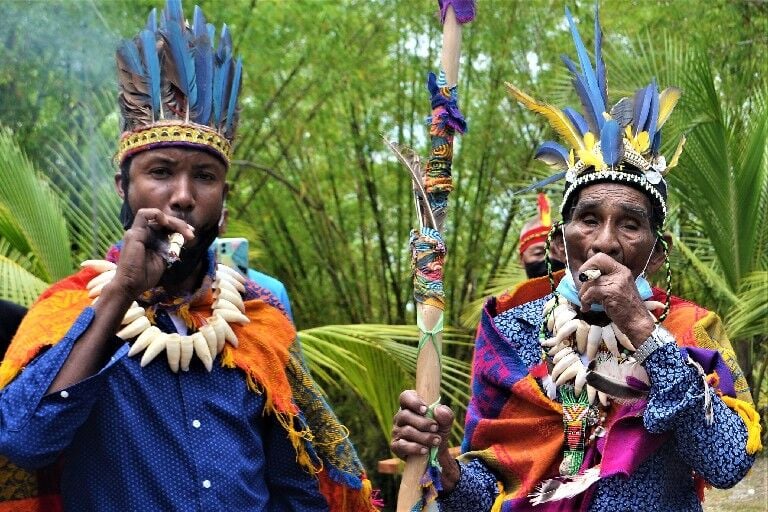 Paying homage: The Prince of Moruga Eric Lewis and the Grand Chief

Paul Navarro conduct the smoke ceremony to bless the monument.

to the First Peoples stands atop

Rock River Hill, one of the highest

points along the Moruga Road.

Paying homage: The Prince of Moruga Eric Lewis and the Grand Chief

Paul Navarro conduct the smoke ceremony to bless the monument.

It was a fitting climax to the unveiling ceremony when Grand Chief Paul Navarro, Prince of Moruga Eric Lewis and members of the Warao community of Moruga placed their handprints at the base of the monument to the First Peoples as a seal of approval and permanence to the lifeblood of their nation.

It was also an emotional moment when the handprint of the grand chief was etched promi­nently in the concrete as he lifted off his hand, with the others following suit.

The monument was literally constructed by the hands of the indigenous peoples in Moruga, with original artefacts forming part of the structure. An actual obsidian was installed at the tip of the spear held by the statue, and a 2,000-year-old original axe head that was housed in the Amerindian stone tool collection at the Moruga Museum is held in the other hand.

According to Lewis, the golden colour was drawn from two sources: one was the legend where the Spanish met one of the caciques and discovered that he was covered in gold, gold that was representative at that time of El Dorado that was much sought after, and the second is that it is symbolic of the rich history and culture inherited by our First Peoples.

Representatives of the Moruga First Peoples community, the Siparia Warao community and the Merikins participated in the traditional smoke ceremony—an integral part of an indigenous ceremony. Songs and dances were performed by members of the Warao community of Moruga.

Adorned in vestures, inclusive of ivory necklaces ethically acquired and the traditional headpiece and cape, the grand chief gave his permission to the prince of Moruga to execute the unveiling and perform the activities on his behalf. They sent prayers that rose to Jesus, the one great God, the one great Holy Spirit, the Creator of Heaven and Earth.

As the smoke rose and wafted around the monument, blessings were requested for the monument. Participants in the smoke ceremony, led by the flag bearer of the Moruga First Peoples, circled the monument three times to the accompaniment of the blowing of the conch shell, shaking of the maracas and beating of the drum.

The monument was erected on Rock River Hill, one of the highest points along the Moruga Road, from where the north, central and southern ranges form part of the panorama. It is also the area where the grand chief resides, where his family expanded and where ancestors of our First Peoples settled before migrating northward.

The location also fits into the balance of the historical and cultural symbols of Moruga as it is the first monument that you meet when you are travelling into Moruga, followed by those of European representation.

Lewis says the creation of the monument was being planned for many years.

“In 2012, we started revitalising the history of Moruga and the idea was introduced by the St Vincent Ferrer Society. The directorship of the Moruga Museum later referred to it as there was a recurring de­mand for it by the Moruga First Peoples. But there was no space for it.”

“The idea resurfaced when there was anti-Columbus expression across Trinidad against the navigator’s monument.”

“When I completed the acquisition of my estate, I envisioned this space for the erection of the monument, and it was a labour of love and commitment among the First Peoples of Moruga during the past six months as the monument transitioned from the casting of its mould to the sculpting of its features.

“As I created the facial features, my thoughts rested on my cousin the grand chief’s face and that of my great grandmother whose photos are displayed in the family collection. I noted the shape of the nose, the mouth and the high cheek bones, and there was definite embodiment of the appearance of the First Peoples of these parts.”

“In the eyes of our grand chief, this was a momentous occasion as he reiterated that he had waited all of a century for such an occasion, and had specially requested that we erect and unveil this monument before his 102nd birthday on the 28th of April.”

“He is happy to see that under his rule we still acknowledge our roots, maintain our legacy and honour the lives of our ancestors by living in accordance with the traditional values they passed on to us through food, song, dance and herbal remedies.”