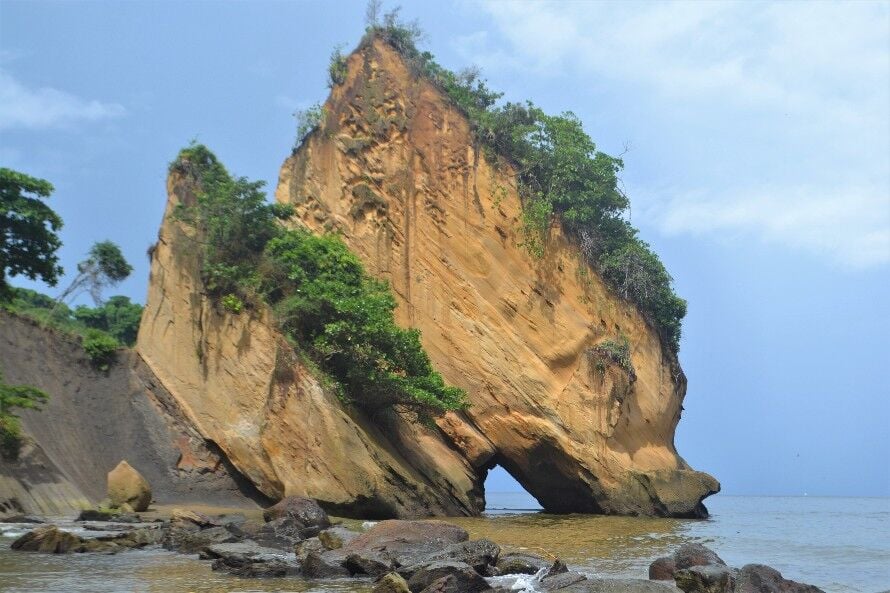 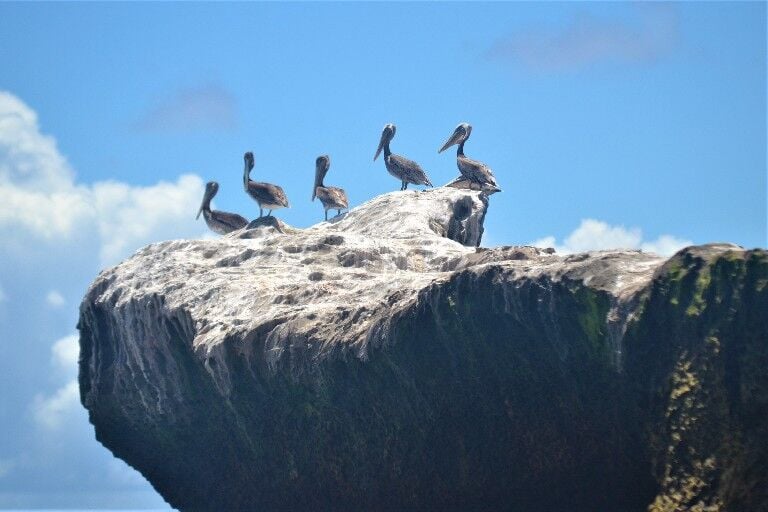 A piece of coastline off the beaten track: islets, arches, caves and stacks stand as fortresses guarding the most alluring of beaches. Water­falls freefall directly into the sea or onto small beaches. They all form parts of the coastal territory of the historic undulations the Trinity Hills.

Because there is no distinct road­way connecting bays west of Guayaguayare communities and east of those of Moruga, settlements are almost non-existent, save and except sporadic sites of hunters and fishermen. Experienced boatmen time the tides when trips to and from these areas are requested.

They tell you that because of the influ­ence of the tides on their comings and goings, it is less risky for a two-day stay than one day. If you leave with the high tide in the morning, it is easy sailing, but when you return with the low tide, the sea is so far out that you get stranded on the extensive sands and vice versa.

This was my personal experience on many occasions when much time was wasted having to push the boat over the sands and shallows into deeper water.

With two or more days spent on one of the most alluring coastlines of Trinidad, you must agree that the away-from-it-all ambience under the dominance of the Trinity Hills is worth it.

One natural feature that rates a shade over the rest is La Belle de L’Eau, an arch or bridge as some call it, that spans the beach at low tide, but allows the water to rush through at high tide. It is every visiting photographer’s favourite and is a special novelty to those walking through it.

Another arch, called Boli, is sited farther out in the water and is a spectacular creation of the marine elements just the same.

The Oven, a sea cave so called because of its appearance like a dirt oven in the cliffs, is another natural landmark that boating Trini­tarians are proud of. I humorously asked if we could venture into the oven to experience the temperature, and my request was met with much laughter on board.

To view so many waterfalls freefalling from the cliffs directly into the sea is an unforgettable experience. They are all the final stages of streams born out of the Three Sisters Hills and nurtured into tumbling waterways, crossed only by those able to swing along sturdy natural bridges formed by looping vines. Of course, this is where red howlers and capuchins play.

Identifying the Three Sisters is of historical importance to southerners, proud of their natural heri­tage. According to the books, these hills were the first sightings of the island of Trinidad in 1498 by the exploring European Christopher Columbus. From discovery to republic, the Trinity Hills have retained their importance throughout.

The long, sandy delight of beaches such as La Table, Canari and others are favourite haunts of campers for the presence of sweet water crossing their expanse and the groves of bearing coconut trees shading their length. When the tide is out, tide pools dot the sands. This is where children enjoy safe bathing and have fun trying to catch the tiny fish darting to and fro.

This is also why same-day trips are not advised because you need to enjoy this advantage of a relaxing holiday both day and night; the beaching of green turtles the climax of nocturnal time.

The landmark that has always been a main attraction in these parts because of its real-life appearance is Steamer Stone. From various points along the coastline, it appears to be a large boat sailing out to sea. Visitors have also mistaken the pelicans perched along the top for people on board.

Today, the white of the pelican droppings are most prominent, even as the crashing of breakers against the bow and stern of the steamer gives the impression of sailing movement.

As with all else along this coastline, Steamer Stone is slowly collapsing. The rocks around its form are remnants of a larger past. Two distinct arches along its hull are also showing signs of weakening.

Still weathering through the passing centuries, Steamer Stone remains one of the main attractions along the Trinity coastline and is unlikely to sail out anytime soon.

Over the last few weeks, I’ve noticed that within my clinical practice persons are seeking therapy for increasing amounts of anxiety. Yet, this is understandable. Each of us is dealing with the very real challenges of the serious widespread pandemic: the Covid-19 coronavirus.

Lion Twin score with a ‘Pull Up’ jumper

A show that takes your favourite entertainers out of their comfort zone and throws them into new musical zones.

“I’VE got a taste for a simple love...gimme all the things money cannot buy,” sings multidimensional singer Stef Kalloo in her new release “Lovestruck Renegade”. The track’s laid-back island vibe, is a departure from the scintillating music Kalloo has released in the past, but that shouldn’t come as a surprise to her fans. The free-spirited artist and fashion designer, has been known to march to the beat of her own drum.

A virtual staging of Trinidad Carnival should not be viewed as a replacement for the annual festival, says promoter Randy Glasgow.

For close to a decade YouTube channel Julianspromos has been the go-to destination for all new soca music releases.

The sport of pole dancing

POLE dancing is most often associated with exotic night clubs and stripper heels. But times are changing. There’s a growing number of persons around the world who have adopted pole dancing as a sport that puts their acrobatic skills and endurance to the test. Just ask Arianna Caraballo. At 22, the UWI graduate is the youngest pole artist, acrobalance and aerial silks instructor in T&T.