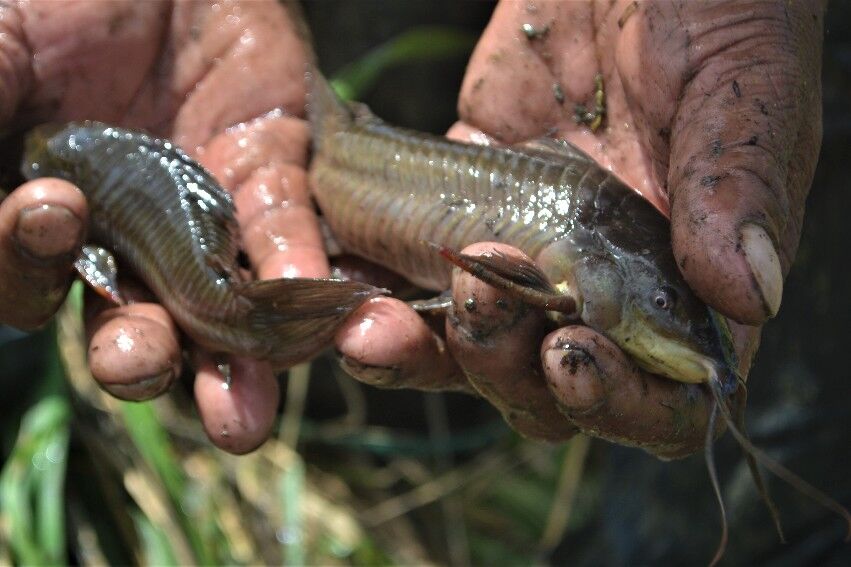 catch in hand: Said to be a species of catfish, the cascadura has a flat head and pairs of barbels seen 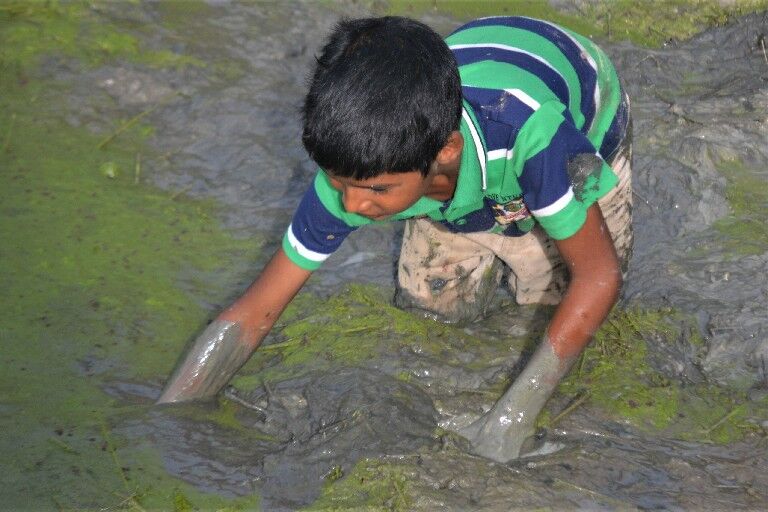 digging around: A boy sloshes around in the mud to retrieve the hiding cascadoux.

catch in hand: Said to be a species of catfish, the cascadura has a flat head and pairs of barbels seen

digging around: A boy sloshes around in the mud to retrieve the hiding cascadoux.

It is that time again, the time for “ketching cascadoux” as communities around freshwater habitats in the lowlands term it.

Dry season is the time when rural families, inclusive of young children, come out to fish for their favourite meal, curried cascadura.

As water levels recede in the swamplands and slow-moving rivers and drains of South Trinidad, it is now easier to harvest a good catch of sweet water fish as they are left trapped in shallow areas.

In Barrackpore, one of several areas where the word “cascadoux” is prominent in the minds of the community for the first half of the year, men are casting their nets in a man-made pond while women and children sit under the shade with buckets of water, ready and waiting to receive the catch.

The cascadura is mostly caught for domes­tic purposes in these parts, representing a well-deserved nutritious and tasty meal after a fun day of harvesting.

From “day clean” or early morning, the men had set up two pumps to assist with draining a 60-foot-wide (18-metre), 30-foot-deep (nine-metre) pond. However, this was a slow process, so the men began casting their nets, eager to catch those fish they could see appearing at the surface amid rippling circles.

Casting the net is also a lengthy process as the net must sink to the bottom of the pond in tandem with the sinking propensity of the cascadoux.

The cascadura (Hoplosternum littorale) is also called mud fish because it thrives in the mud and retreats into the mud at the bottom of the pond when threatened.

When the net closes in on them, it is dragged slowly along the bottom of the pond, then pulled up onto the bank. By this time, everyone around has been splattered with mud by the casting and retrieval of the net. You could see, smell, taste and feel the mud as you join the “mud lime” as it is called.

Sometimes, one or two fish are caught, other times, eight to ten; most times, a net full of mud. It is all in one cast net of fishing.

The pond took the entire day to be drained out. This was the usual time for a mud lime with these families. Two large pots of rice and curried chicken were served hot from the chulha. Another pot stood waiting for the cooking of the cascadoux later.

The residents understand that this fish emerges to feed at night then retires to the muddy bottom during the day, with occasional surfacing appearances. Therefore, the men, born and raised in this type of fishing culture, know the art of harvesting a successful catch so well.

The cascadura is native to Central and South America, and like in Trinidad, it is also a popular source of food, especially in Guyana, Suri­name and Brazil where muddy conditions of flatlands support this resource.

Said to be a species of catfish, it is easily recognisable by its armour-plated body, flat head and pairs of barbels or feelers that give the appearance of whiskers.

In Trinidad, patriotic legend has been ascribed to the cascadura, and as these fishing families anticipate the sweet taste for which this fish is well told, one family introduced a new twist, “Those who eat the cascadoux will never leave home anyway”.

Kato of Kato’s Ranch and Off-Road Track observed that besides changes in weather patterns, loss of habitat has contributed to a decline in the availability of the cascadoux.

“Human impacts are affecting what was previously rice land. Extensive areas have been drained and crops requiring chemical protection introduced.”

“As a result, people have dug private ponds to compensate for this loss, but the healthy populations of cascadoux that spawned in natural areas are a thing of the past.”

By late afternoon, everyone was all muddied and wet, but accepted this as part of the fun.

“We muddy like cascadoux,” one boy shouted, and promptly slid down the slippery bank of the pond, straight into the slush left behind by the water and algae.

The slush was almost a foot deep (0.3 metres), but the boys did not seem to mind as they slogged their way around and dug their hands into the “soup” after the hiding cascadoux.

Most of the cascadoux had retired to what was the middle or deeper part of the pond, and as the boys sloshed and grabbed after the thrashing escapees who in turn were adept at jumping out of their hands, this was deemed the most fun time of the day before everyone went home to have a bath and settle down to curried servings of their freshly caught cascadoux.