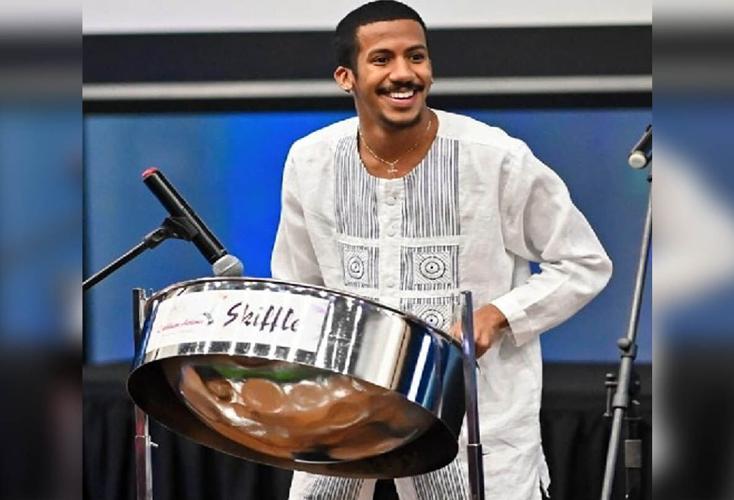 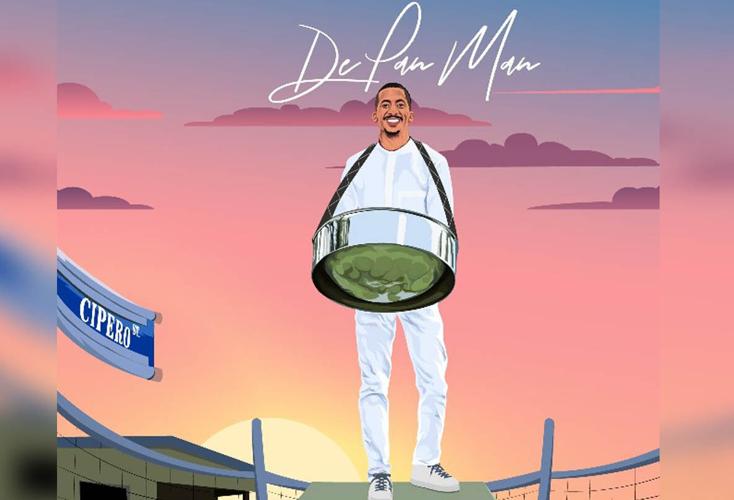 Regrello has a lust for life and it shows in his music. If you are not a pan lover, Regrello’s cover of Benjai’s ‘Trini’ and the accompanying video on social media may transform you into one. The album’s tracklist has 14 pan covers of some of the most popular calypso, soca and soca parang songs. The pannist also covers bhajans and one gospel song on “De Pan Man”. All the tracks on the album were recorded, mixed and mastered by Kyle Phillips of Badjohn Republic.

“Listeners can expect versatility from De Pan Man,”says the effervescent Regrello. “It includes all the covers I’ve done over the past two years. I’ve put all my creativity, heart and soul into this album, it’s something you can listen to, no matter the occasion.”

To say that Regrello loves pan would be an understatement. In fact he was born into a pan family and has been playing pan for most of his life. And if his name sounds familiar, that’s because he’s the son of the Caribbean Airlines Skiffle Steel Orchestra founder, turned politician Junia Regrello.

“There were many nights when I slept at the panyard. From the moment I could stand on my own two feet, I started to play. My father brought me these souvenir pans - the ones with six notes. And at the age of three I was playing - nothing serious of course - but I just loved playing it, so playing the steelpan was a natural progression for me.”

As time passed, Regrello got better and better at playing pan. Naturally, his appreciation for the instrument also deepened. When he decided to do an album of all his pan covers instead of just uploading his songs one by one to the various streaming platforms, Regrello knew he was treading on unfamiliar ground.

“Here in T&T we don’t really have an album culture. There isn’t much hype around albums like there is in the US where people were so excited over Drake’s new album. Also you don’t see or hear local steelpan covers steaming on digital platforms,” he says.

De Pan Man represents Regrello’s musical journey and the evolution of his sound over the past two years. Since its release, Regrello has received positive feedback from listeners who have praised his innovation as well as the album’s artwork which was done by Jerrell Riley.

Regrello’s intention is to take pan to the next level and he’s confident that the future of pan is bright.

“There are a lot of young people involved in pan, they will take the art form forward. Pan is in good hands,” he says.

The past 16 months have been the slowest period the entertainment industry has ever known in recent memory but the pandemic hasn’t stopped Regrello from exploring other creative elements. In the past year he discovered TikTok which he admits keeps him sane. His TikTok account which has more than 58,000 followers and 1.2 million likes is the perfect outlet for his creative antics - some of which are requested by his followers.

“As a pannist, it gives me some exposure, a lot of people who see the content fall in love with it. It gives people something to do and is also an outlet for those who want to earn money,” he says.

Like all other musicians and entertainers, Regrello looks forward to performing in person at live events, but until that time comes, he will continue to take his creativity to the next level.

“The steelpan is a beautiful instrument,” he says. “Even if you’re not a pan lover, give the album a try, I’m sure you will be amazed.”

A passion for perfect penmanship

Anyone, at any age, can improve their handwriting abilities with the right guidance, says ed…

Your brain needs a time out!

We all know that just leaving the office doesn’t stop our mind from racing.

Our brains are constantly working, but there’s a major difference between the kind of work we do for money and the way our brains work to support us in our daily lives. That’s why experts say downtime is crucial to a balanced life and a productive workplace.

The Belmont-born filmmaker, photographer, painter and writer has built a prolific career in film and holds the Guinness World Record for being the first black British filmmaker to direct a feature-length film, Pressure (1976). Ové has documented racism and the Black Power movement in Britain with films such as Baldwin’s Nigger (1968) and Dream to Change the World (2003).

Welcome to the latest installment of the Bocas Book Bulletin, a monthly roundup of Caribbean literary news, curated by the NGC Bocas Lit Fest, Trinidad and Tobago’s annual literary festival, and published in the Sunday Express.

Zo and the Forest of Secrets (Knights of Media), the debut book of children’s fiction by Trinidadian Alake Pilgrim, follows a young girl on a thrilling supernatural journey through the forests of her home island. This first novel in a new fantasy series brings together elements of mystery and mysticism, grounded in the very real landscape of the author’s home island.

Leah Yip Ying and Lindon Mitchel together at Horizons

Horizons Art Gallery welcomes Lindon Mitchel and Leah Yip Ying for a joint exhibition that’s sure to thrill. Lindon’s watercolours and Leah’s rich acrylics both offer vivid glimpses into life in Trinidad and Tobago; with their forces combined, viewers are promised a joyful and uplifting experience.

‘Road Made to Walk’