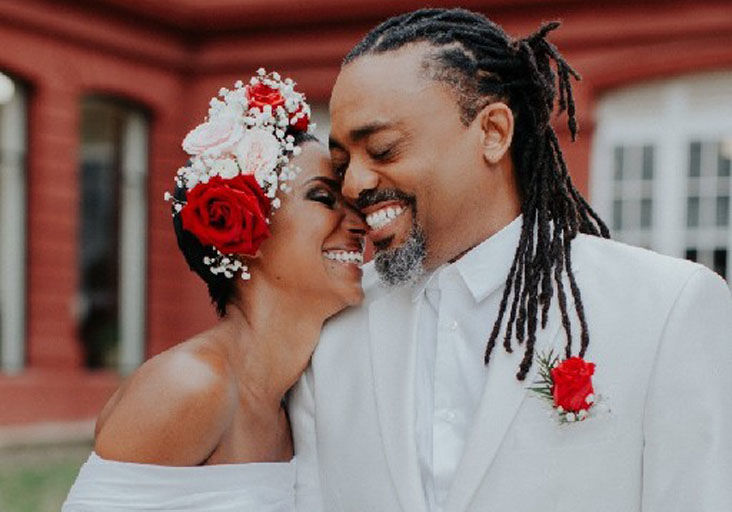 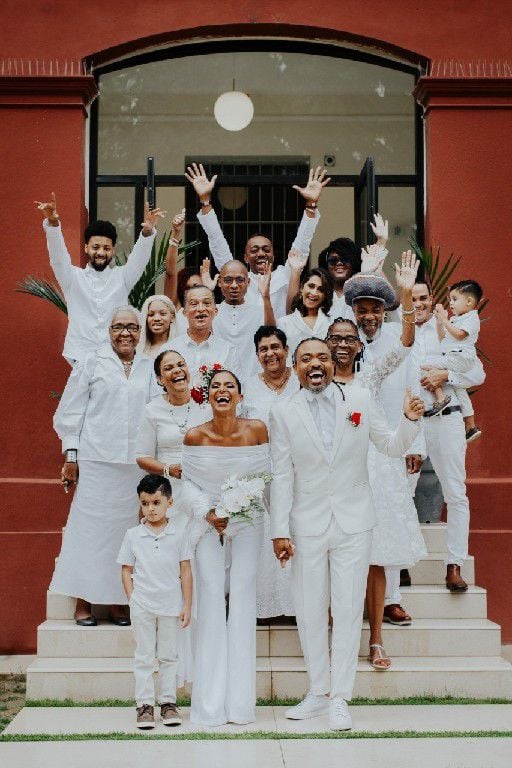 Soca music’s biggest star said “I do” to his longtime girlfriend, yoga instructor Renee Butcher during a simple ceremony on Friday morning at the newly refurbished Red House on Abercrombry Street, Port of Spain.

Machel and Renee have known each other for over 25 years. The couple have been close friends for the past 15 years and embarked on a shared journey of peace and enlightenment through yoga and meditation three years ago.

“When I first met her she was going Bishops (Anstey High School). I made a joke and said: ‘Girl, you will be my wife.’

“She say: ‘Never you. You is ah hot man, you all over the place’,” a happy-sounding Machel Montano told Kitcharee, via telephone, an hour before his nuptials on Friday morning.

Machel, 45, says the connection he shares with Renee goes deeper than the ordinary butterflies of falling in love.

“We just come together on a spiritual level,” he said when asked to put words to his emotions.

“We journeyed into yoga together. I introduced her to meditation. We practise both every day. We changed our diet, stop eating meat, stop drinking (alcohol) and stopped smoking.

“Is a balance to move forward as sun and moon, masculine and feminine, to complete each other. Is not like we just see each other the other day and fall in love, we developed together as individuals,” he insisted.

Machel announced recently that tomorrow’s tenth edition of “Machel Monday” will be his last. He has aptly titled the concert “The Wedding”. And although it may be easy to view the link as an elaborate marketing ploy, he insists that he doesn’t need to “pappyshow” his wedding to sell concert tickets.

“It was never about the commercial part of ‘Machel Monday’. I never had to use any strategies to sell tickets,” he said coyly.

He said the union of his marriage and concert came together after having a discussion with event promoter and close friend Chinese Laundry (Anthony Chow Lin On).

“I told Chow earlier in the year I wanted this to be the last edition of the concert. I know is 2020, but I have bigger ideas in my pocket and in my brain. He agreed with me. Once he gave me the go ahead I told him what I wanted to theme the show. He ask meh if ah serious. I say ah dead serious,” Machel revealed.

Machel said after literally growing up in full sight of his countrymen and having his highs celebrated and lows examined by the public, it feels quite normal to share his special day with his fans.

“There are so many things I’ve celebrated from a child. Not just triumphs, but also tragedies. Tribulations. Wins. Losses. This one is special, especially coming together with Peter Minshall again,” he said.

The 12-time Road March winner and five-time International Soca Monarch has had his problems during his three-decade-long career in soca music. In 2007 he appeared before the courts to answer an assault charge after a fight involving other soca artistes and members of the public. An initial conviction was eventually overturned by the Court of Appeal.

In 2001, Machel had to stop his performance at his “Real Unity” concert after a scaffolding collapse that left several patrons injured. He had teamed up with legendary mas designer Peter Minshall on the night but the two never really got to complete their show.

This year at “The Wedding” they plan to showcase the full potential of their joint creativity, he said.

“2001 was one of the tragedies of my career. Twenty years later we team up again and this one is triumph.

“This is not something we selling; is something we sharing. I always sacrifice myself as an example to the youth. Now every artiste have their ‘Machel Monday’ that is the standard, the goal, the ambition,” he said.

He said it’s fitting that he worked with RnB legend Teddy Riley before closing this chapter of his career. He said the American hit-making act has always been a great source of inspiration of him personally.

“Teddy Riley and Blackstreet have played such a pivotal role in my musical life. Getting the opportunity to sit with him and talk about soca and what we could do is a blessing. Teddy brought me into Shalamar and we made the song ‘I do’.

“Then I’m bringing some of the biggest names in Afro beats. We so proud of this cast,” he said.

Who knows what’s next

Machel admitted to not having a clear vision as to what would follow “Machel Monday”. He said, however, while fans may be sad to see the end of the MM era they should be heartened that better things are on the horizon.

“I will always have new ideas. One of the most important things to me is the idea of the sound of the music and not just the sound, but the message. Part of the spiritual journey and understanding and finding yourself is discovering the messages want to be a bit different. The sounds want to be a new sound,” he hinted.

“I have been playing with the unknown for my whole career. I don’t know what the destination is. It’s about setting a direction and being in awe of what you would meet along the way. My ultimate goal is to reflect the highest expression of myself and share it with others. I will continue to look within and express the highest version of myself,” he continued philosophically.

“I have dreams of putting the story of Carnival, soca and T&T on Broadway and on stages in Las Vegas. But I’ve been always busy working on an album, or preparing for Carnival fetes and MM. Now I will have more space and time,” he reasoned.

Machel laughed loudly when asked about his embracing of his graying jawline and locks. Getting serious he said yoga has taught him his true beauty is not his outer appearance.

“We have all this idea on what beauty is. Beauty is only staying young and only young is beautiful. But you find grace in every quadrant of life: your first 25 years, second 25, third 25 and if you’re lucky a fourth one.

“Wisdom comes and you perceive life beyond physical nature. My beauty is about loving who I am in every moment and with every change that happens. I look at it and I like it. Some days I do find like I looking old though,” he laughed again.

Pausing to choose his words he continued: “Am I happy? Am I joyful? Am I feeling pleasant within myself? All these are lessons that I feel soca music can house. We have an organic happiness in soca,” he said.

Several comparisons have been drawn between Machel and deceased US pop star Michael Jackson over the years. Both started off very young in music. And both have gone on to rise to the top of their respective genres.

Machel is quick to point out that unlike Michael Jackson, however, he had a balanced, loving childhood thanks to the efforts of his parents Monty and Elizabeth Montano.

“I have no regrets. I had a good childhood and a good family. Good friends. I had time to play. You could look at it half empty or half full, but I had a great life coming up. I am 45 and I think I will live to be beyond 100,” he half-joked.

Machel was adamant, however, he will not be stretching his performance career into his old age.

“I see calypso acts on stage well into their 80s and I ask myself do I see myself doing that. Not at all. I have dreams of being a farmer.

“There are so many things I sacrifice for music. I want to learn how to plant pimentos one day. I want to increase my ability to meditate, do my yoga. I mean I could always come back and help people with their music and do shows now and again,” he said.

As for his legacy, Machel says while he is aware of the impact his music would have on this and future generations he wants people to remember him for the feeling they get when they listen to his music.

“I want people to remember me for how I made them feel. When you spread your hand open and say ‘we ready for mas again’ or ‘I does do it like a boss’.

“Many stories are told, but a feeling is something you could take with you and transfer to other people. When the impression is left on others it encourages them to spread that to more people.

“When you come to ‘Machel Monday’ tomorrow I want you to walk away feeling loved. I want people to have a love for their country, their music, their family, loved ones, jobs and themselves. And when they think of me I want them to think: ‘Here lies love’,” he concluded.

THE WEDDING: On Valentine's Day Soca star Machel Montano tied the knot and wed, Renee Butcher, at the Red House in Port of Spain under Christi…