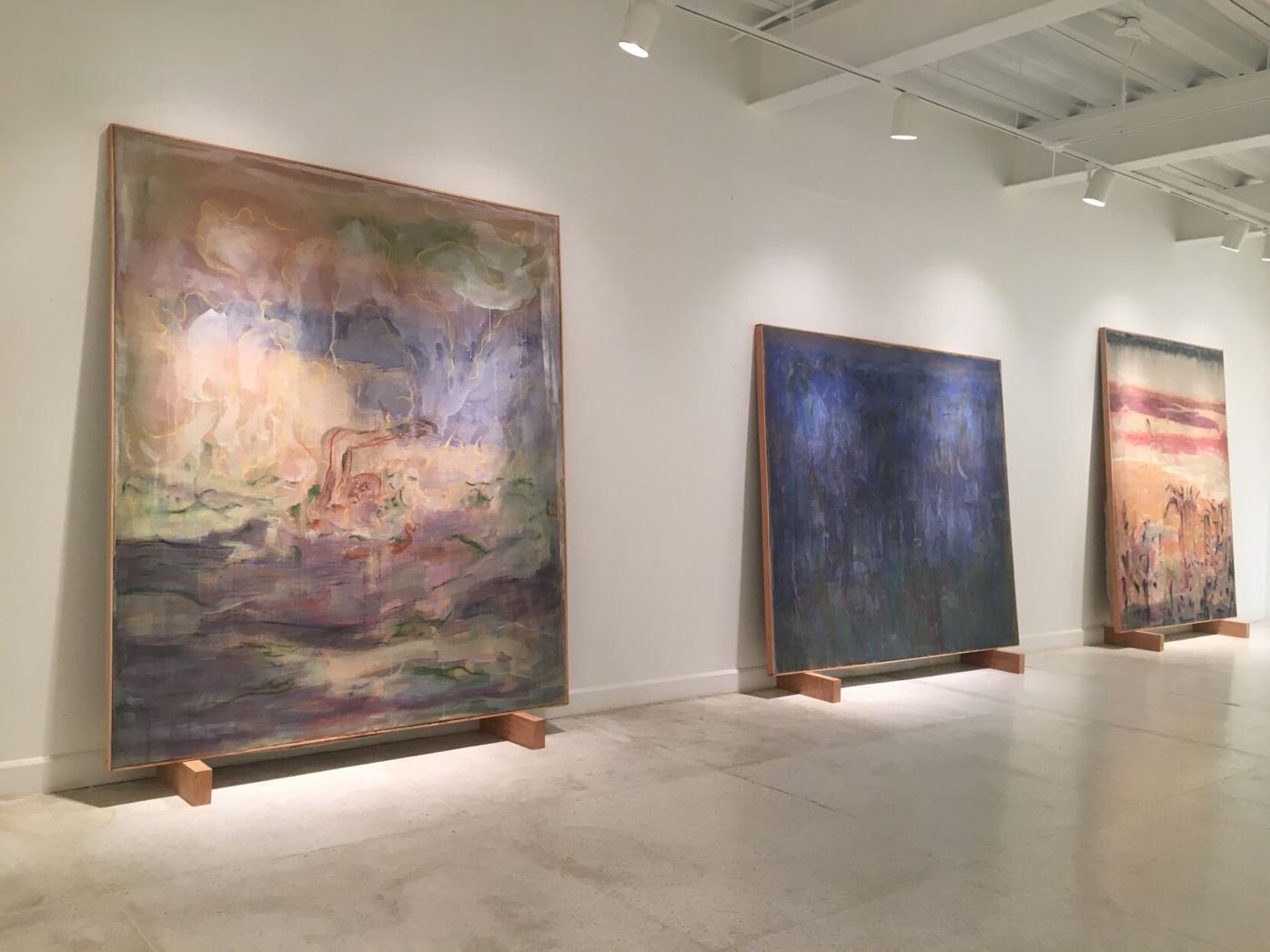 BEES IN A TRAP by Sarah Knights 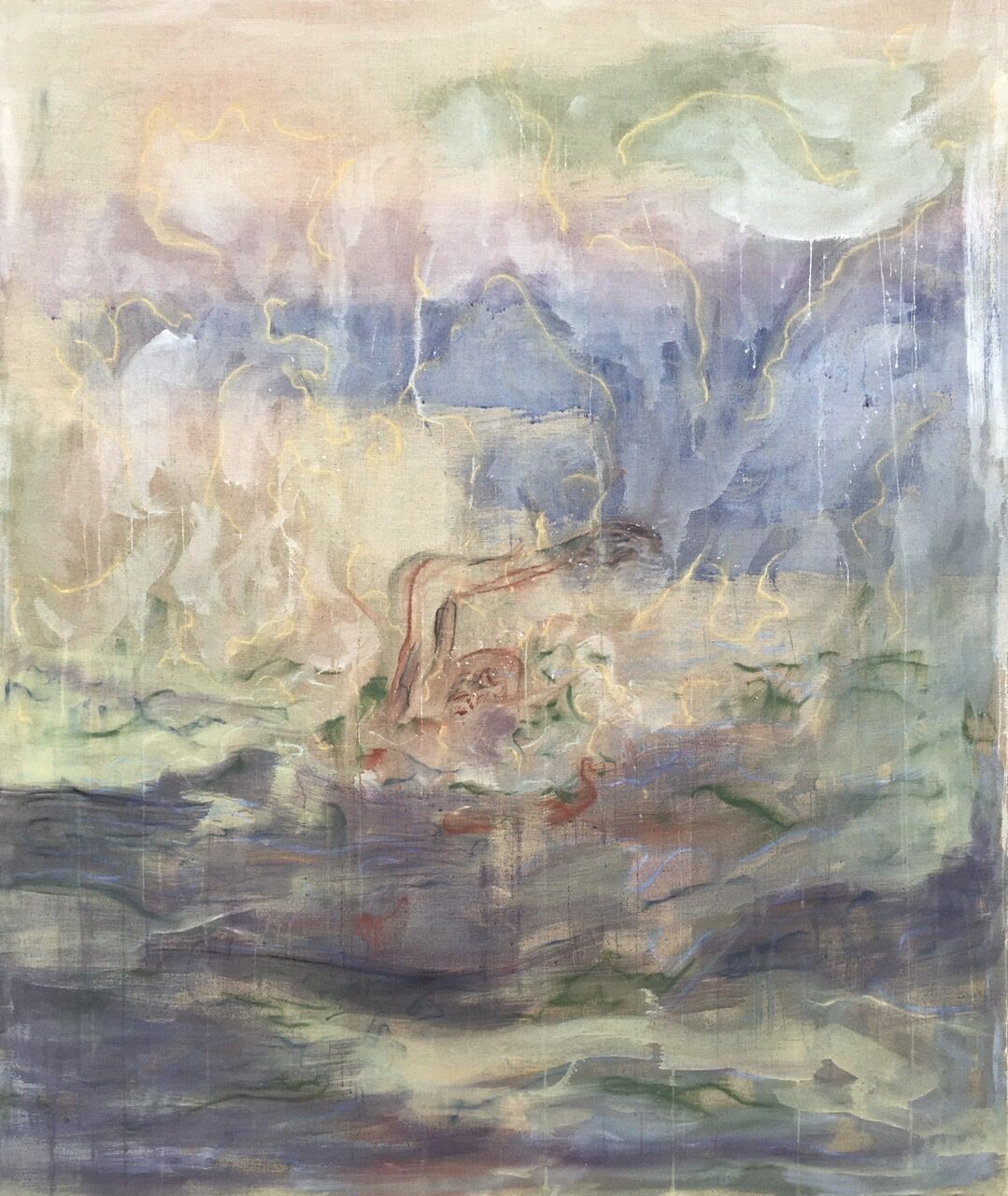 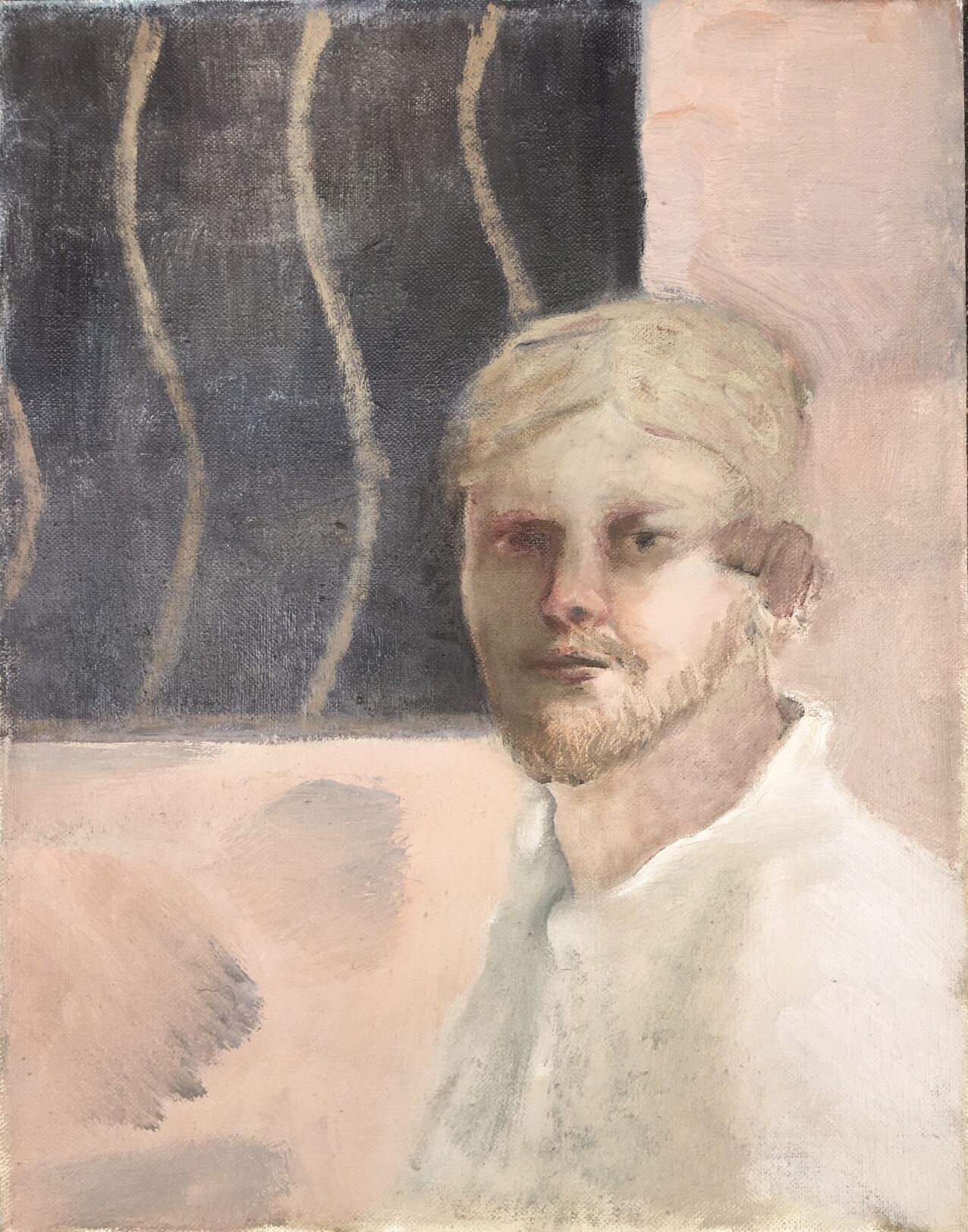 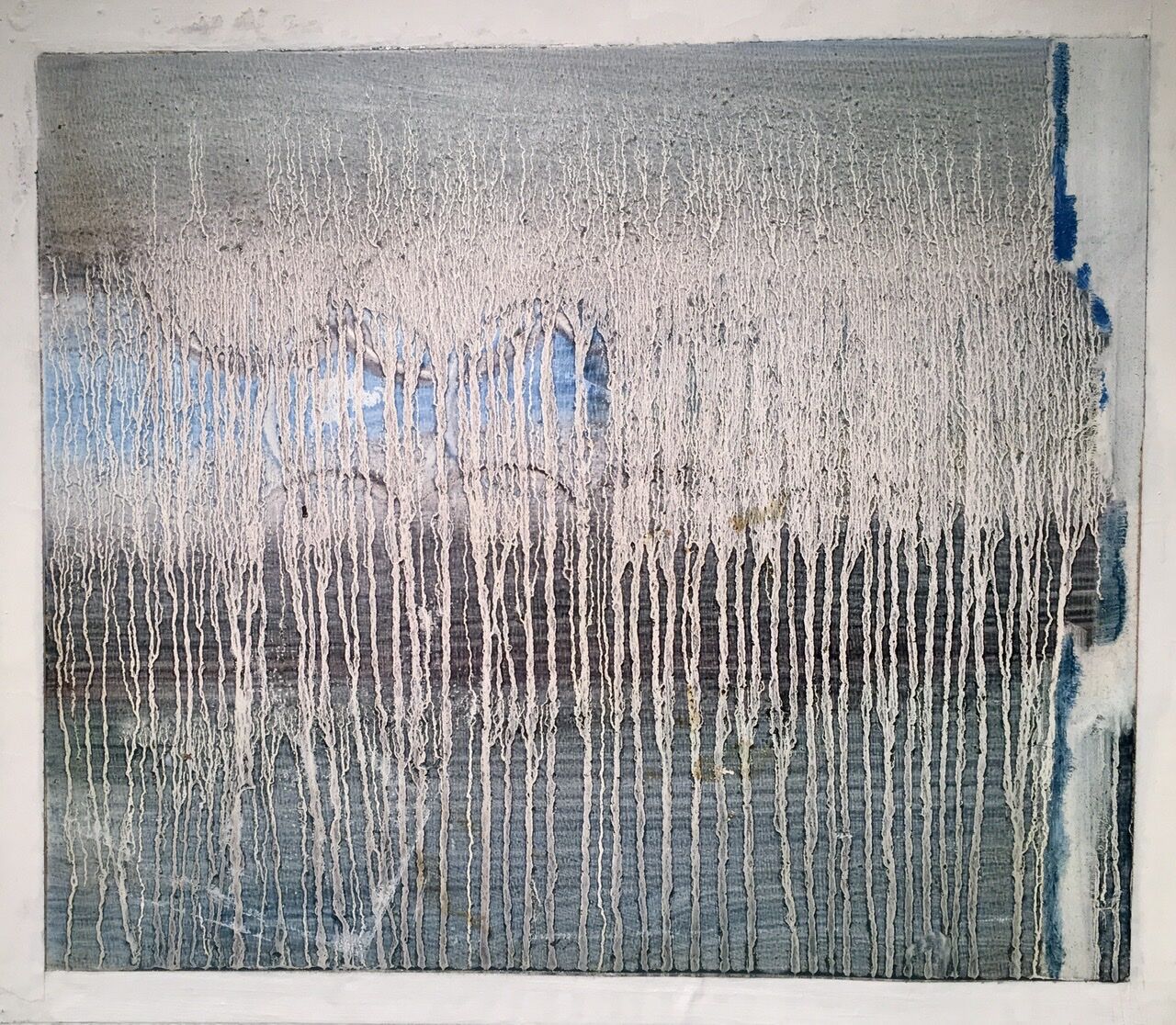 HOW OLD ARE YOU by Taya Serrao 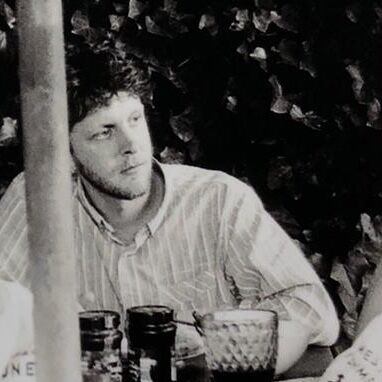 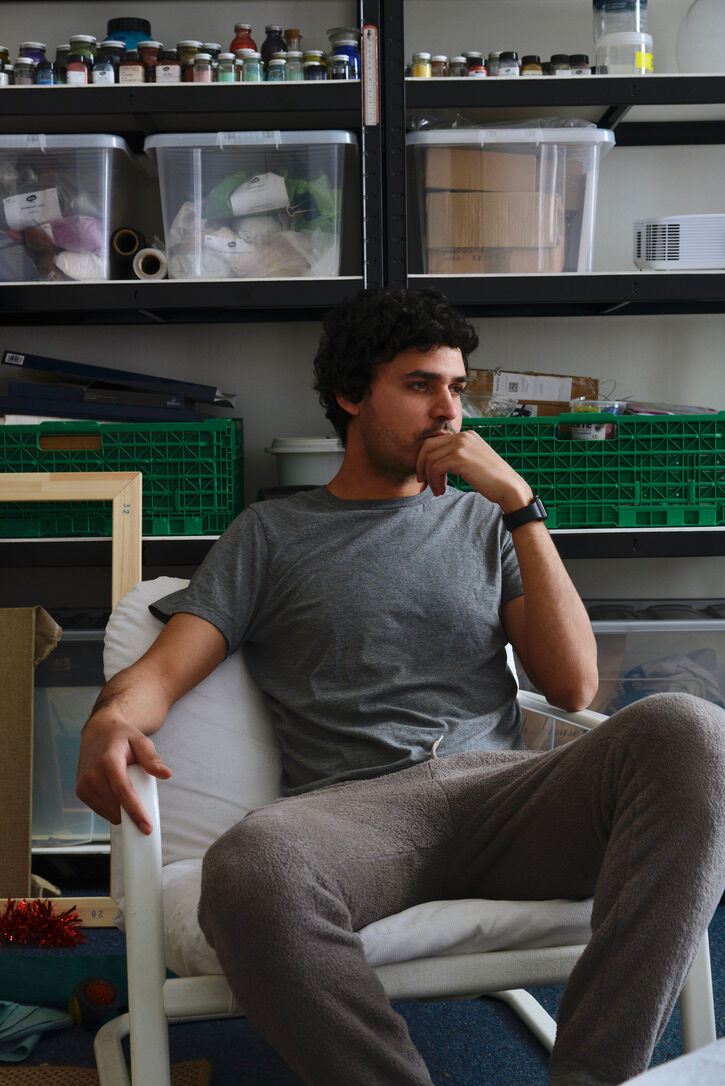 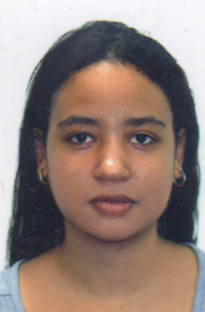 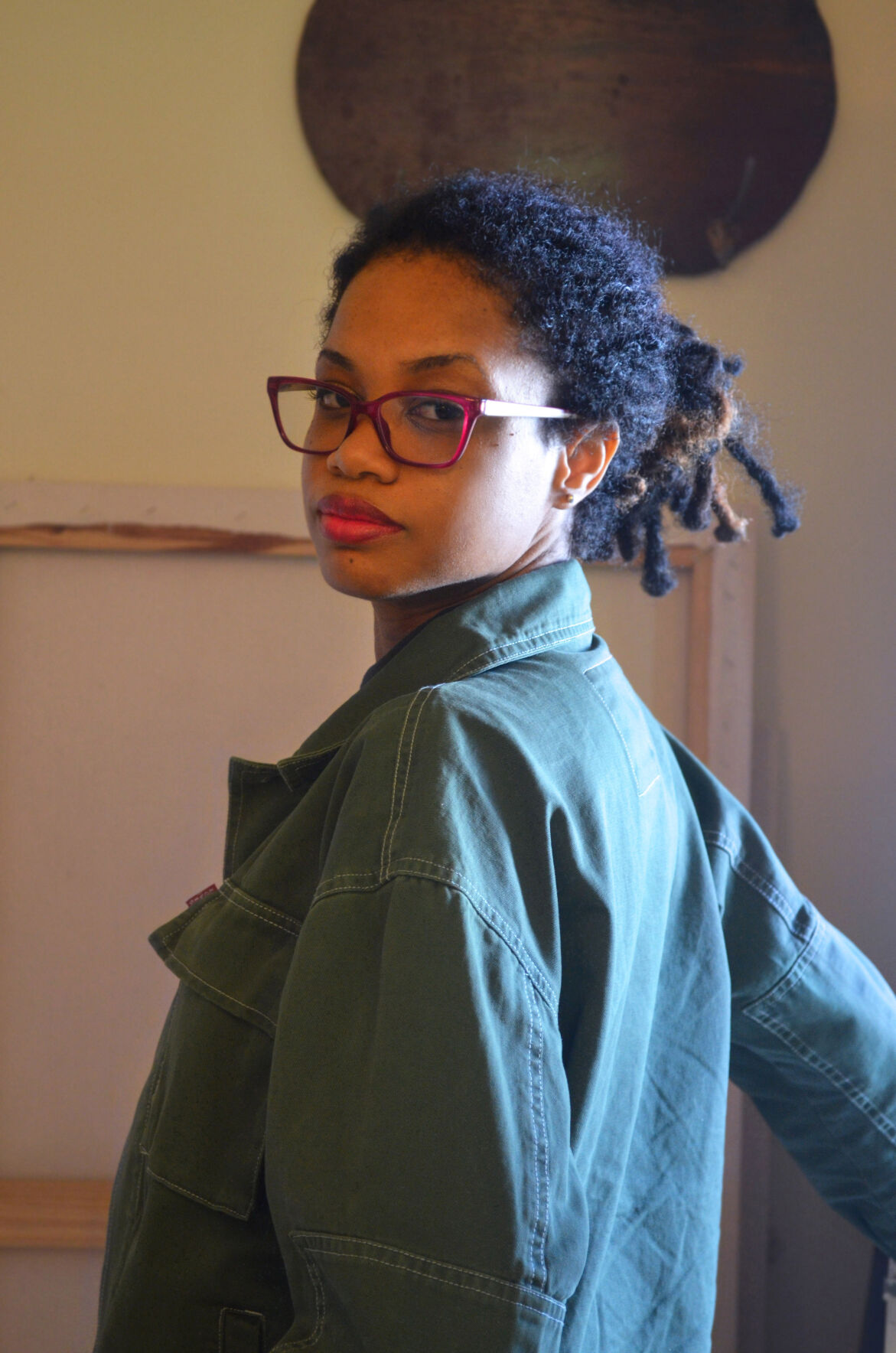 The first question that one will ask is “Why is it called In Lieu of Flowers?”

Justin de Verteuil suggested the name for the exhibition. The symbol of giving flowers is particularly pertinent during the present pandemic, given that flowers are used as a symbol of expressing support, the gift of which increases feelings of compassion and happiness, and as Justin describes it: “And in lieu of flowers we have art”.

The Gallery has always encouraged young and independent thinking artists to display their work. In Lieu of Flowers emboldens the non-traditional, as opposed to Trinidad’s more “popular art”, largely expressed through photo-realism. The lockdown over the past two years is reflected in the personal expressions of the artists’ lives during this period.

The four artists whose work is included in the exhibition are: Justin de Verteuil, Sarah Knights, Marcus Leotaud, and Taya Serrao.

Justin began his study of painting under the private tutorship of Edward Bowen in 2013 before beginning his further education at the Kunstakademie Düsseldorf. He started in 2014 with a guest year in the class of Peter Doig, and continued from 2015 to 2020 in the class of Siegfried Anzinger. He is currently studying in the class of Katharine Wulff. His work has been exhibited at the “Open Studio” of Edward Bowen in 2014, Medulla Art Gallery, “Stare the Line” in 2014; Contemporary Art Düsseldorf, “Pass auf Anzinger” in 2016; Sprink, “Massephase” in 2017; The Box Gallery, “Trio Infantile” in 2018; at Grundlos Kollektiv in 2018 and Friedrich J.H. Schneider-Stiftung/Studienpreis in 2020.

Justin perhaps sums up the spirit of the works on exhibition:

“I can’t write about my paintings explicitly, nor do I particularly want to. Words are words and an image an image, and the two walk parallel to one another and complete that which is missing in its counterpart, but they can’t explain each other. I paraphrase Degas in saying that “The Muses don’t talk to one another, they dance amongst each other.” The title for the show “In lieu of Flowers”, I hope, dances in one’s thoughts as they visit the show, points their feelings towards knowing what paintings can sometimes be for, and in turn gives the work purpose. I hope I’m forgiven for being so bold as to include the other three artists in my thoughts.

These paintings were made between January and March 2021, the coldest and darkest days both literally and figuratively speaking, at the beginning of the second lockdown in Germany. Trudging to the studio, sometimes by a sliver of sunlight through an otherwise dark and turbulent sky, the ability to paint, to have a reason to leave the house, upended the monotony of day-to-day life devoid of distracting joys and the nearness of ones loved. It gave orientation and purpose beyond mere existence, which itself was otherwise seemingly under threat.”

Sarah Knights was born in Sangre Grande. In 2008 she graduated with an associate degree in Visual Communications from the John S. Donaldson Technical Institute. With her new appreciation for art and design she later pursued a bachelor’s degree in Visual Arts at the University of the West Indies. Her formal training at the UWI helped her to use art as a means of self-expression and healing.

After graduating she began working on a body of mixed media paintings using herself as the main subject to discuss issues of identity with women in modern societies. Her paintings reflect both the present and the past and look at racism, feminism, beauty, and religion influenced by western media and popular culture.

“My paintings are self-portraits inspired by popular culture, politics, and current, social, and historical events. The subject of ‘self’ has become very important in my work as I examine “the fact of being” in this complex, ever-changing society, heavily influenced by Mass Media and Social Platforms.

The image of me, clad in a conservative dress has become an important motif throughout my paintings. This motif borrows the stiff, classical pose of the 1900s and is juxtaposed and layered with other motifs and images iconic to the present day. Collage, embroidery, acrylic and found objects are employed into most of my paintings, inviting the viewer to look a bit closer”.

In 2018 Sarah had her first Solo Exhibition entitled “One Thousand Mes” at Medulla Art Gallery curated by Martin Mouttet. Her works have been exhibited in various group exhibitions including: “Connecting Cultures: Contemporary Art From Trinidad and Tobago”- U.S Chief of Mission Residence, US Embassy and Medulla Art Gallery; “Growth”, The Caribbean Center for the Arts, St Croix; “Thru Contemporary Arts Collection”, Art Society of Trinidad and Tobago: “Mixed Bag”.

“While stylistic schools are not a feature in contemporary art, thematically the works I produce are best understood under the umbrella of New Romanticism. As described in Max Hollein and Martina Weinhart’s catalogue for ‘Ideal Worlds’ - Behind the desire for the paradisiacal, the beautiful, and the magic of fairy tales, the dark and the eerie are present as the insight that Utopias are doomed to failure. Loneliness as an essential Romantic outlook this central subject is mainly dealt with in the form of sceneries charged with symbolic qualities. Contemporary art encompasses numerous variations of this theme which range from the threatened idyll and its invocation to the overwhelming impression of outer vastness and nature as a space for regarding the transcendental.

“An exit impulse, an unyielding desire to get from somewhere familiar to somewhere unknown (imagined) - I’ve been thinking about what prompts people like myself to leave behind familiarity and at times comfort for adventure or ‘arcadia’. Some of my work touches on displacement as one of the players in neo-cultural dynamics, but mainly the perverse romanticism of otherwise comfortable individuals sleeping rough or in unconventional accommodation arrangements in the quest for the Arcadian experience is central.

“The work sits on the borders of representation as I find it unburdened by a specific narrative but I have a love for representational paintings and have been trying to find their relevance within the creative hum of multimedia experimentation that I am contemporaneous with. I am at the point where my regard for classical approaches is in both that I consider them less esoteric than new media and that ironic representation is achievable through media designed for the most stable of environments.”

Marcus has exhibited his work at The Whitmore Road Gallery in 2011; The Royal Academy’s “Summer Exhibition” in 2012; The Prince’s Foundation Gallery in London in 2012; Pallant House Gallery in Chichester in 2012; the Royal Scottish Academy in 2012; the Salisbury Museum in 2019; The Chainstore in 2020; and the De Montford University in 2020.

His work was selected for exhibition at The Prince’s Foundation and Pallant House Gallery from a National Open Art Competition. His selection for the Salisbury Museum and Chainstore was from Trinity Buoy Wharf drawing prizes.

Taya Serrao is a multimedia artist who lives and works in Port of Spain. She has a Bachelor’s degree in Fine Art from Cooper Union School of Art in New York, having graduated in 2018. Her work is best described as contemporary abstract art and her work as displayed produces a tremendous flow and movement with her images.

“For this series of paintings, I drew from my surroundings and started with very few intentions beyond making an interesting impression of what I was looking at.

It was important to look at subjects as though I was seeing them for the first time, a form of creating distance between myself and the subject, in order to really observe it. I am interested in the way that this distance can be depicted on a painted surface and the relationship this process has to photography.”

NOTE: The exhibition continues until Saturday October 30. Opening hours are Monday to Friday 10a.m. to 6p.m. and 11a.m. to 2p.m. on Saturday.

For more than three decades that timeless lyric from calypso icon David Michael Rudder has comforted many a pining West Indian heart, stuck in the hustle of big city life on both sides of the Atlantic.

Rapso of a Black Man's resistance

AFTER a long hiatus, the exceptionally talented rapso artist Dixie-Ann Joseph, better known as Shakeela is back with new music. With some prodding from the youths of her Back Ah Yard Youth Development Programme she penned the words of her latest track “Irie Christmas” which was officially released on Wednesday on Wack Radio 90.1 FM.

She’s waiting, for you

Rhonda Knights is the undisputed female hip-hop queen of Trinidad and Tobago and this incontestable fact facilitated her rise to acclaim in the 90s in Trinidad and Tobago, but she’s far from done. As fierce as she’s ever been, Sistaron, as she’s popularly known, now delivers another hit single, this time with melody that’s intrinsically soca.

Welcome to the latest instalment of the Bocas Book Bulletin, a monthly roundup of Caribbean literary news, curated by the NGC Bocas Lit Fest, Trinidad and Tobago’s annual literary festival, and published in the Sunday Express.

Dloxx makes music in the kitchen

A good meal is like hearing your favourite song. The right combination of ingredients could make you bob your head and shuffle your feet.

That’s exactly the response entertainer Dloxx (Dalton Jeremiah) aims to inspire daily at his self-titled Dloxx Kitchen in Arima. Dloxx cues up a different local favourite on his menu’s turntable six days of the week at the eatery located at Cynners Sports Bar on Subero Street in Malabar.