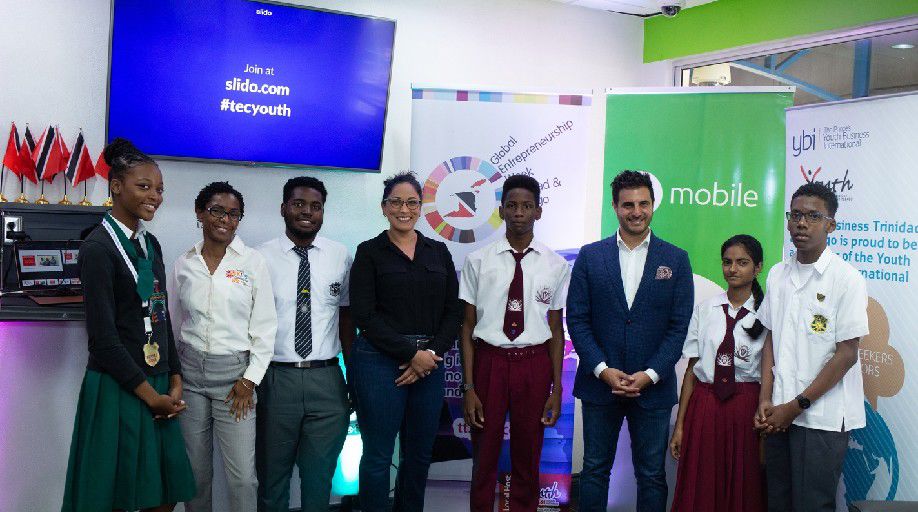 Sara Bernard, Founder of Smart Kids Education Club (2nd from left), Ria Karim (centre) and Oliver Sabga share the frame with representatives from the four schools that participated in the bmobi. 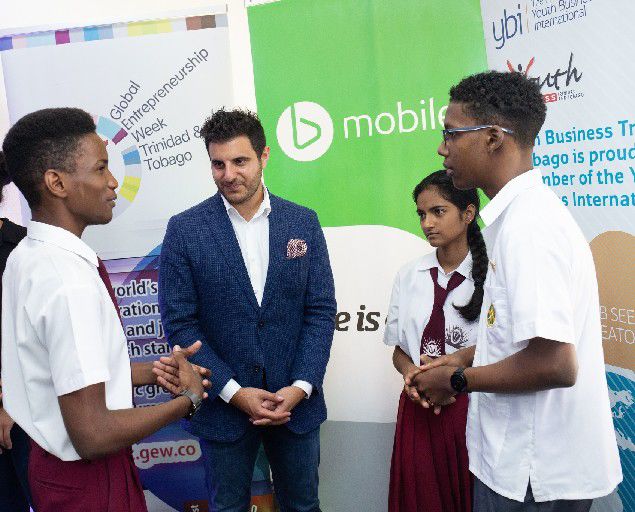 After the session, these eager students seized the opportunity to engage Sabga for a more in-depth discussion.

Sara Bernard, Founder of Smart Kids Education Club (2nd from left), Ria Karim (centre) and Oliver Sabga share the frame with representatives from the four schools that participated in the bmobi.

After the session, these eager students seized the opportunity to engage Sabga for a more in-depth discussion.

Smart technology and finance go hand in hand. This was Oliver Sabga’s main message to a group of tech students who attended the bmobile TecYOUth Conference.

Inspired by Sabga’s fintech success story, some 40 pupils were fully immersed in the newly minted bmobile Business Technology Award winner’s presentation on “Technology, Entrepreneurship and Winning”. On November 15, Sabga’s web-based credit institution, Term Finance Holdings Ltd, emerged as the category winner at the TT Chamber’s Champions of Business Awards. Since launching in 2015, Term Finance has expanded to four markets across the Caribbean; Barbados, Guyana, Jamaica and St Lucia. The entire lending team operates in Trinidad and Tobago and all processes are managed online. According to Sabga, “the victory is a seal of approval.”

At the conference, the future tech bosses received encouraging words from the savvy businessman, who compared technology to the slingshot and rock in the story of David and Goliath. The pupils were advised to not be afraid of the Goliaths or big businesses and that to be a successful tech-trepreneur, they must be brave, relentless and protect their reputation. “Never give up. All entrepreneurs face obstacles but you must be persistent and work your way through those challenges. Technology is a catalyst to create business solutions but your perseverance will determine your success”, stated Sabga.

Opportunities also presented itself as a pupil from Pleasantville Secondary School was offered an internship at Sabga’s company. He noted, “I was impressed with the youngster. One question led to another and I was absolutely blown away by his knowledge, bravery and thirst for information.”

Darryl Duke, TSTT’s senior manager Enterprise Operations, who also delivered a presentation to the vibrant bunch, discussed the partnership: “bmobile has been a long standing advocate for tech driven entrepreneurship and youth development. We’ve contributed significantly to building a robust ecosystem and there is no plausible reason why we can’t have our very own Silicon Valley here in T&T. As evidenced by the students at this conference, there is no shortage of talent. We’ve provided the infrastructure and we will continue to do our part to bridge the gap, demystify technology and encourage the next generation to think critically and be more innovative and solutions oriented. It is against this backdrop that we’ve joined forces with YBTT and why we’ve partnered with the UWI and Huawei to develop a world class Innovation lab, iGovTT for a Hackathon and most recently, CARIRI, for coding workshop. Investing in the future of T&T is etched in our DNA”.

Encouraged by the curiosity of the students, Ria Karim, founder of D’Junction app, offered three critical tips to the youngsters on developing and sustaining a successful app:

1. Identify or create a market;

2. Develop a business plan that is sustainable and state clear goals;

3. Continuously innovate while remaining true to your core business offering.

Wanting to get in on the action, Joshua Karim of Naparima College, highlighted that “the digital economy plays a critical role in unlocking the outstanding potential of young innovators around the world.” His presentation was met with loud cheers and accolades from the other presenters.

Sixth form pupil Joshua Shah of Naparima College echoed similar sentiments, saying that he is interested in pursuing a career in technology, but wants to test the water before he decides the area. He said, “Technology is the driving force for how the world would move forward, how businesses will operate and how the economy will grow.”

“Entrepreneurship and technology is the way that we are heading and it is imperative that the children are exposed at a very young age” noted Palo Seco Secondary School Teacher, Joannah Collins-Young. She said, “bmobile has given the children a great opportunity today and I am happy that they had the foresight to bring some of the curriculum topics and making it come alive at the session.”

The highlight of the afternoon was a game of Jeopardy. The TSTT Hospitality Suite, Queen’s Park Oval, was transformed into the set and studio audience for the game. Categories included programming, tech-trepreneurs, and IT. Naparima College and ASJA Girls’ College emerged as the finalists. In what can only be described as a brilliant end to the educational and interactive game, the winner had to be determined by a tie-breaker. Kyle Samlal of Naparima College brought home the win for his school.

Teen has a knack for apps

When David Love was around eight years old, his tech-savvy dad introduced him to coding, a t…

WHO urges governments to promote healthy food in public facilities

Public settings, such as schools, childcare centres, nursing homes, hospitals and correctional facilities and all other canteens of public institutions, can play a key role in ensuring people are provided with healthy food and helping prevent the eight million annual deaths currently caused by unhealthy diets.