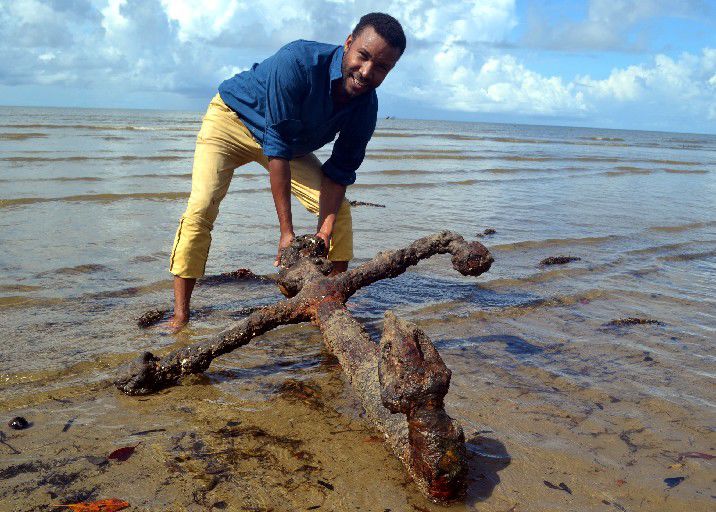 PART OF OUR HISTORY: Curator of the Moruga Museum Eric Lewis retrieves an anchor once used by a Dutch boat from the sands at La Lune. 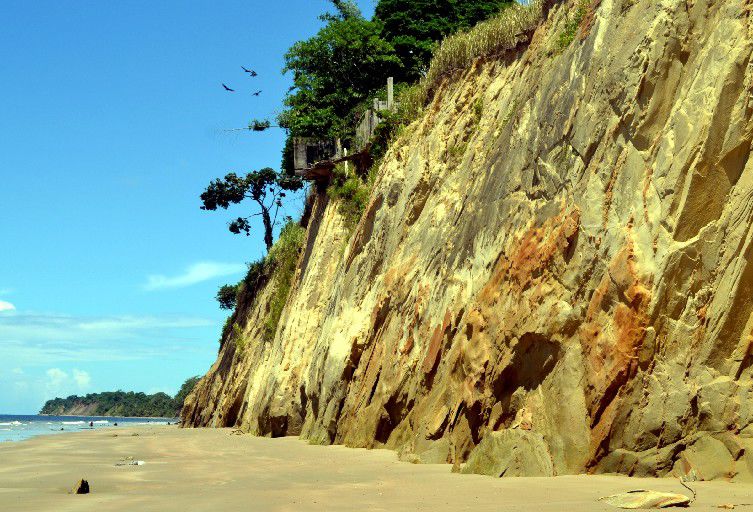 PART OF OUR HISTORY: Curator of the Moruga Museum Eric Lewis retrieves an anchor once used by a Dutch boat from the sands at La Lune.

Forces of erosion along the south coast of Trinidad show two distinct phases—one of destruction and one of revelation, one following the other as the years go by.

At La Lune beach, Moruga, in the area that was once a vibrant slave plantation called the Henry Estate, the stark results of coastal erosion on the vulnerable limestone terrain are prominent. Cliffs that were once steep and vegetated have collapsed into rubble in some places.

To the younger generation of the community such as curator of the Moruga Museum Eric Lewis, the rapid rate of erosion is being witnessed during the still-early stages of their lifetimes.

“I have observed the collapse of these cliffs during my 30 years of life, so you can imagine what would have occurred over a time span of 100 years in this area that is so highly prone to erosion.

“An entire road that used to pass along the seaside at the front of La Lune here is now lost. This was the Canari Road that ran parallel to the shore from La Lune east through Gran Chemin, all the way up to La Retraite then to Canari. This road was the official passage along the sea front between Canari and La Lune when mules and horses were the order of the day.

“The Henry Estate was last owned by Betty Robinson—a woman much loved and respected for her hard work and generosity towards the community. In an effort to curb the rate of erosion along the seaside, she deposited rocks and heavy metal as a sort of bulwark to protect the land against the relentless waves. Since her passing, the metal dealers came and looted everything.”

When you take a walk along the beach at La Lune, the extent of erosion along this part of the coastline is shocking. In some areas, the sea is sending far-reaching surges past the high tide line and into the properties of residents along the beach-front community, leaving large deposits of trash in its wake.

A house that once held what was regarded as the most strategic spot for a commanding view of the rest of the coastline and the Columbus Channel is under threat of total collapse into the sea as it now balances precariously over the edge of the high cliff. In fact, much of it is now out in mid-air.

No doubt this house, once occupied by Betty Robinson’s mother, will soon be lost to the waves and sand, and will lie buried until discovered and parts retrieved in years to come, for there is another side to the ongoing destruction of the coastline by the sea. Historical items that were once buried by the waves are now turning up.

Lewis retrieved an anchor that supports the writings of local historians that the Dutch actually had a presence at Moruga in the 1600s and that it was possible Dutch ships anchored here while they offloaded slaves.

“When I found the anchor half-buried in the sand on La Lune beach, I did some research in that area in relation to boats and ships and on the anchor itself, its shape, make, place of origin.

“If this anchor could speak for itself, it would tell all those tales about Dutch colonies and slave trading that were the activities of that time.”

Like the finding of this anchor that reflects a part of our history thought to have been long lost, many other items of historic rele­vance are being retrieved along the coastline at La Lune. We anticipate the exposure of more invaluable relics of the past as the sea continues to erode into the coastline relentlessly.

The historic anchor is now housed at the Moruga Museum.

As Trinidad’s coastal areas are being battered and broken by heavy surf and swells such as the high seas events of two weeks ago, scenes of ut…

SINCE beekeeper Aditya Ramlochan began bee removals in 2001, he estimates he has removed abo…