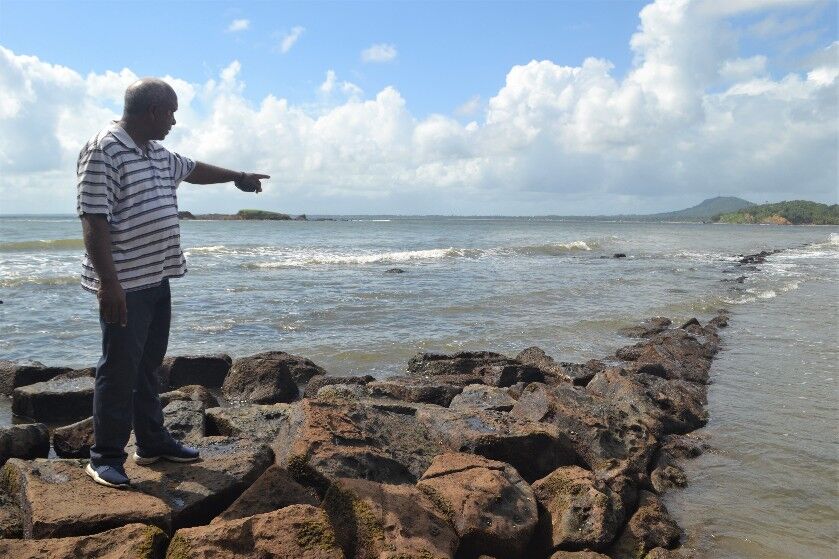 SHOWING THE WAY: Gerry Audain shows a line of stone said to be part of a port of call along the east coast. 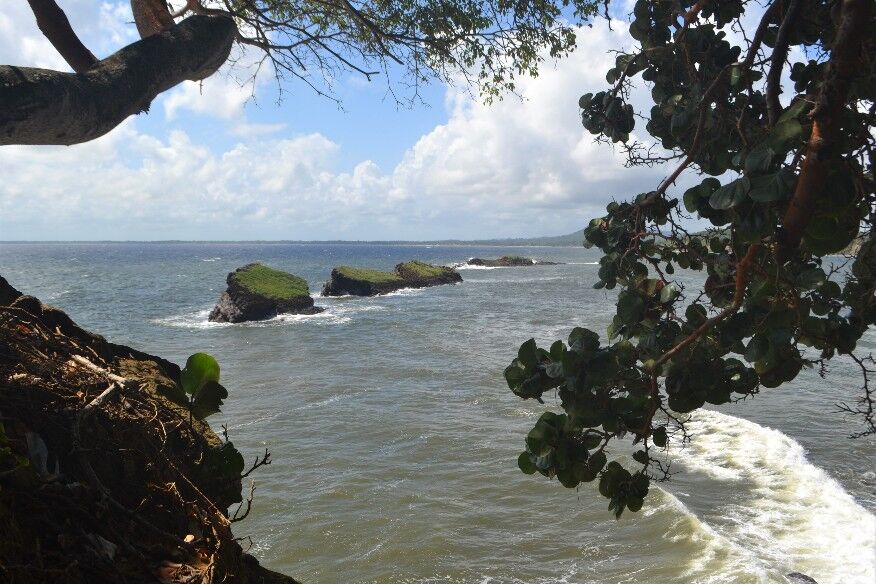 ALL IN A ROW: View of Manzanilla Point and the Three Sisters. —Photos courtesy HEATHER-DAWN HERRERA

SHOWING THE WAY: Gerry Audain shows a line of stone said to be part of a port of call along the east coast.

ALL IN A ROW: View of Manzanilla Point and the Three Sisters. —Photos courtesy HEATHER-DAWN HERRERA

Decades ago, when a profusion of coconut palms and almond spreads graced the beach area of North Manzanilla, it was a perfect spot for weekend and holiday getaways.

Back then, there was much more land space and the area was kept clear of overgrowth. About 40 to 60 vehicles enjoyed accommodation on the flat land, and visitors used to enjoy the ambience of this east coast sanctuary that sheltered under the protection of the Three Sisters.

The Three Sisters are the remnants of the tip of Manzanilla Point that succumbed to erosion by the sea. Not long ago, they were all larger rocks after becoming detached from the headland, but after erosion they separated further and came to be known as Manzan’s Three Sisters. North Manzanilla became one of five areas in Trinidad that features “three sisters” formations.

The Sisters were not the only attractions that drew visitors to the area. Physical evidence of the past life and livelihood of this coastal area gave it a historic lure, records of which may have been otherwise buried in our archives.

When resident Gerry Audain introduced plans for a project of enhancement for the area as a tourism destination, the entire community was in full support and unreservedly got on board.

As public relations officer of the village council back then, he presented a plan that was welcomed because it augured benefits across the board for the community as well as visitors to the area. There was the promise of employment of the community’s population of six to seven hundred people, and North Manzanilla was on track to become one of the top destinations along the east coast.

According to Audain, there would have been a sizeable work force inclusive of permanent employees in supervisory positions, ground maintenance, security and management of the facilities, enough lifeguards for a beach this size, and much more.

“It would have been a community effort because there are ladies in the village who have done courses in grass weaving to produce items such as baskets and mats, lots of talent. The cuisine culture in these parts is also second to none. Members of the community remain eager to have a regular flow of visitors to the community so that they could be self-sufficient.”

None of these plans was ever realised because of lack of funding, and the community continued to watch helplessly as visitors came and went, with nothing put in place for their contribution to the whole.

Because the permanent CEPEP gangs no longer maintain the area, the parking and camping site has become overgrown with bushes. Visitors must now park at the top of the hill before walking down to the beach.

Despite these hindrances, people still visit North Manzan, not only to enjoy the coastal ambience but to learn about historic presences in these parts.

North Manzanilla Beach has always been a popular camping site, and a simple walk north along the beach towards Cito, a small area in the immediate lee of the Sisters, will show you why you need to spend more than one day here. It is a historic and eco experience that ought not to be missed.

From the start of your walk from the end of the cliff road north to the point, which in total could take anywhere from 15 minutes to an hour depending on your itinerary, you look out to enjoy a view of the Three Sisters.

According to Audain, many people come just to see the pregnant old lady lying in the water. She is one of the Three Sisters’ siblings, the last one out. She has a long chin, open mouth, hair spread out at the back, and a large tummy above her knees and feet.

As is signposted at an intersection along the beach road, Camp Trace marks the historic occupation of an American military base in the early war days. There used to be a supermarket and cinema here. Handed-down information tells of villagers going to the tents for the small fee of a penny to see the black and white movies.

Precariously at the edge

At one point below the high cliff side lining the beach, you encounter cobblestones that once formed part of the wall of the military camp road cemetery. There was no means of transport for bodies in those days, so burial was done at this site.

With all the landslides that have occurred at the base of these coastal cliffs since then, parts of the cemetery have been coming down onto the beach from the top, bit by bit. A grove of palms now balances precariously at the edge of a cliff.

Further along the beach closer to the point, there are two distinct lines of stone running out to sea. One seems to be of natural origin jutting out as it is from a truncated cliff, but the other seems to be of uniform cut and strategic placement. It is said that this could be the remnants of a port of call.

The stones would have been brought here as ballast and would have proven convenient for the round-the-island ferry that serviced this side of the coast in the collection of the provisions and rice that were planted here.

Beyond this is a bathing area called Cito, which villagers highly favour for family time. The spot is sheltered in the arm of the point and the Three Sisters off the tip. The shade of the vegetation here also provides welcome respite after walking along the open high-cliffed length of the beach.

Pelicans can be viewed on the low-vegetated top of the Sisters, and a short climb of a passage up to the windblown summit of the point affords more views of the Sisters and the more turbulent northern side.

This is also a favourite spot for linesmen after lipi and phag.

During the walk, Audain drew attention to the continuing erosion of this section of coast by the sea.

“We have lost about 35 to 40 feet of land to the ocean, and this is throughout the bay. Back in, say 2006, there were lots more coconut trees, almond trees and more beach where the road reached the end. As a result, the camping area is now smaller.

“The house on the top of the cliff fell into the sea bit by bit until that entire piece of land area was claimed by the sea below. Cliff slides can be seen throughout the bay.

“This is where a sustainable project is urgently needed for the area. We now have to look at erosion protection because we are losing a lot of land space to coastal erosion. This is all part of saving one of Trinidad’s potential top tourism destinations.”

With so much to offer, the community is looking forward to restoring North Manzanilla’s past glory, not only for itself but for the people who will continue to visit and bring others with them.

WHO urges governments to promote healthy food in public facilities

Public settings, such as schools, childcare centres, nursing homes, hospitals and correctional facilities and all other canteens of public institutions, can play a key role in ensuring people are provided with healthy food and helping prevent the eight million annual deaths currently caused by unhealthy diets.