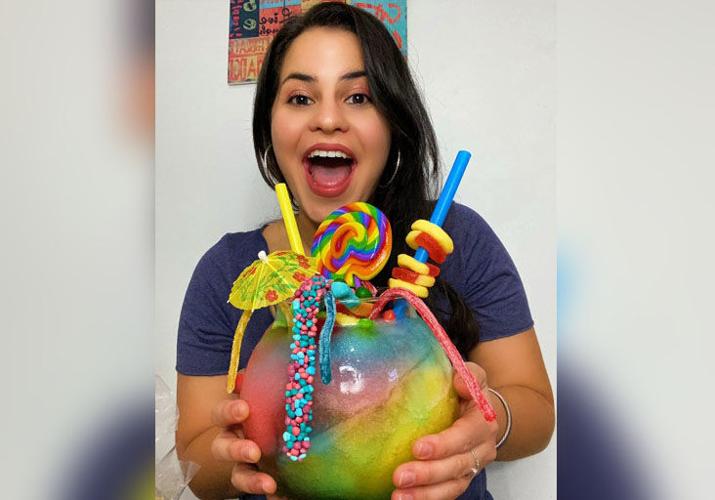 Rochelle Chedz shows off her latest creation, a giant cocktail, at her 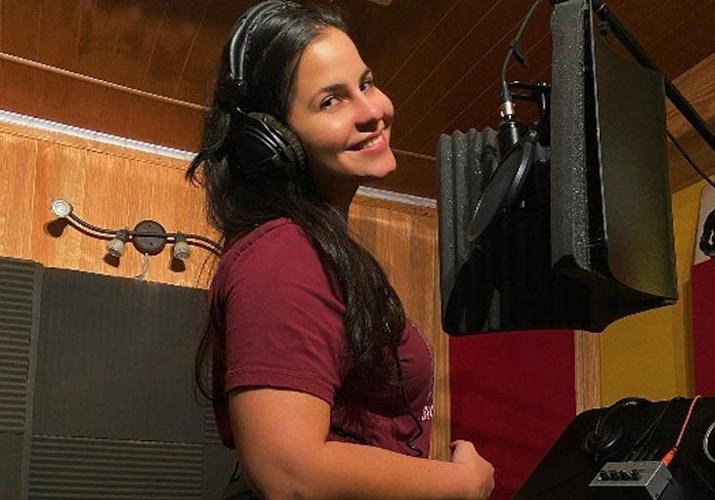 BACK IN STUDIO: Chedz says she is happy to be back making music after two years of lockdown.

Rochelle Chedz shows off her latest creation, a giant cocktail, at her

BACK IN STUDIO: Chedz says she is happy to be back making music after two years of lockdown.

A healthy pouring of rum.

That’s the secret ingredient always on hand in singer/songwri­ter Rochelle Chedz’s kitchen. White flavoured coconut and pineapple rum makes its way, in no specific measurement, into every dish and cocktail she creates on her hilarious TikTok-famous amateur cooking video series.

Chedz says her signature move of pouring rum into every dish was born out of sheer necessity.

“We use a lot of coconut milk and coconut flavour in our local dishes, and I genuinely didn’t have coconut milk one day, so I figured some rum would have been sufficient. And, yes, I am open to endorsements,” the affable entertainer chuckled during a WhatsApp exchange with the Express yesterday.

Chedz’s videos are a riot. The Imij & Co performer’s poor knife technique and obvious lack of any real culinary training whatsoever has endeared her to a 50k-plus social media following.

The Port of Spain-born singer clumsily stumbles through first-time attempts of curried chicken, stewed chicken, callaloo, brownies, doubles, pholourie, pomerac chow and barbecued meats. Her pat-on-the-back catch phrase of “Oh Ma Gosh!” after tasting her food has been copied and shared as many times as her laugh-out-loud videos across social media.

“I actually wanted to be a chef when I was much younger, then I realised I enjoyed eating the food more than cooking it,” she continued with another laugh.

The downtime of the pandemic-­forced lockdowns, she said, sparked a renewed interest in cooking since she “had no choice but to cook”.

“I figured it’ll be fun to film myself cooking. That’s how it all started. I randomly said ‘Oh Ma Gash!’ in my first-ever cooking TikTok and just stuck with it. I’ve successfully attemp­ted to make various local dishes for the first time, but I think my loved ones would still rather do the cooking. I’m more of the designated bartender,” she snickered.

While rum is heavily, very heavi­ly, featured in all her step-by-step tutorials, Chedz says the real magic ingredient to creating great-tasting food is the love and passion you put into process.

“I get a real sense of joy from doing these fun cooking tutorials. I just want to entertain and hopefully make everyone’s day a bit brighter after watching my videos. Am I open to having my own cooking show? Absolutely, I would love to have my own show,” she beamed.

Back in studio recording new material, Chedz says she is hoping to give her music and cooking fans even more reasons to dance in and out of the kitchen. A versatile performer, Chedz is known for her singing and rapping talents. She also has performed freestyle verses in several Imij & Co sets.

“I am currently in studio finalising my first single release for 2022. I’m super excited, this song is gonna be a fun one and I honestly can’t wait to share it with everyone,” Chedz concluded.

1. Clean and cut up chicken.

2. Add salt, black pepper, rum, cayenne, other seasonings and rub into the cluck-cluck.

3. Add half a medium bottle of tabasco, and using a spoon, toss around, spreading it evenly.

5. Remove from fridge and deep-fry till golden and crispy.

6. Get ready for the best wings ever!

A Call Within A Call: All Politics is Local by Parasram (Paras) Ramoutar; Winston Dookeran (foreword); independently published, 2021; 311pp.

Stories underscore the common humanity of our existence and are of powerful significance in the field of life writing, where autobiographies, memoirs, diaries, letters, testimonials, essays and—post-20th century—e-mails and blogs underscore the resonance of the individual perspective.

The impact of Covid-19 on children’s mental health

DURING his 39-year career as a clinical psychologist, Dr Krishna Maharaj (now retired), called for properly-staffed child and adolescent mental health units to be established in every regional health authority. Such units, said Maharaj, could prove to be indispensable when it comes to identifying and treating mental health disorders at an early age.

Kaveesh Maharaj’s life mission is to create music that echoes the sound of the spirit.

Maharaj has returned from studying classical Eastern music in India and assembled a talented group of like-minded musicians to tap into that very energy.

The trip that changed my life

HELICOPTER pilot Capt Safia Hosein has spent the better part of the last two decades hopscotching the world, ticking one adventure after the other off her list. Much has been written about this inspirational and ambitious aviatrix/adventurer who grew up in Biche and chased after her dreams in spite of the sexism that threatened to derail her. Out of all her experiences and accomplishments -and there have been many (Hosein has travelled to more than 60 countries and was the first ever female helicopter pilot to fly a world leader), there is one that stands out above the rest. Her recent trek through the Nepali Himalayas and to Everest base camp tested her mind and body like never before and left an indelible mark on her life.

India is a power house in the beauty and fashion industry.

And now comes, Miss Sari Trinidad and Tobago Beauty Pageant under the esteemed patronage of the High Commissioner of India.

This local beauty competition is for young ladies seeking the opportunity to represent Trinidad and Tobago internationally.