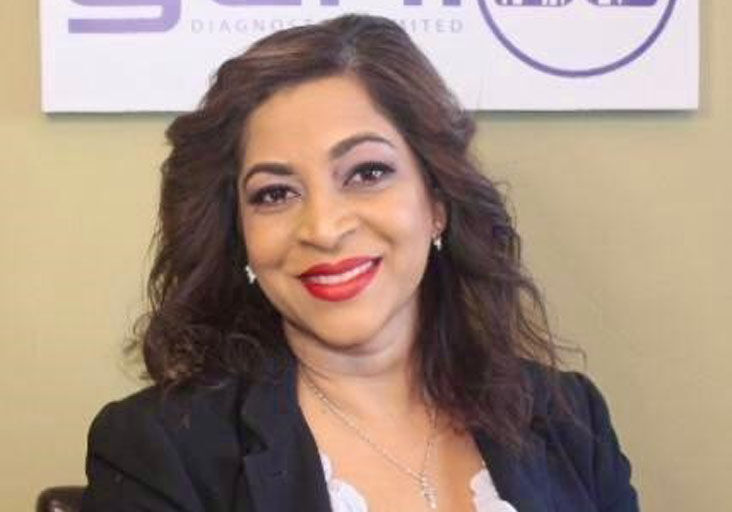 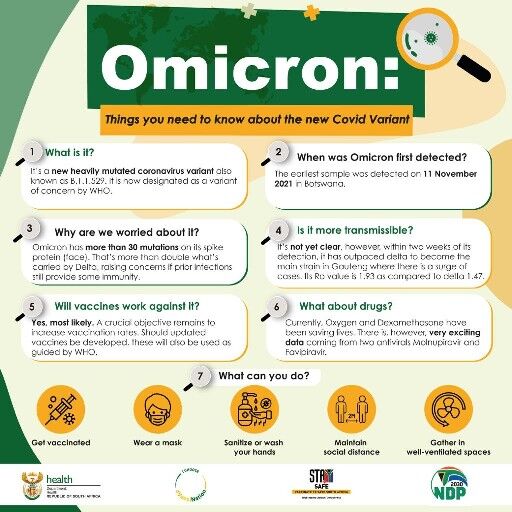 “It is very concerning but this is what we’ve been saying from day one. Once you have a large group of individuals who are unvaccinated like they do in Botswana where this new variant has emerged (and India where the Delta emerged prior to this) there is the potential that the transmissibility and severity of the disease and its ability to evade acquired immunity will increase in these variants that are accumulating over time,”said Ramlachan.

This particular variant — Omicron — has 32 mutations in the spike protein. The spike protein is the lock and key mechanism which the virus uses to infect host cells.

According to the World Health Organisation, there were at least ten mutations in this variation associated with the receptor-binding domain on the protein spike.

Compared to two for Delta and three for Beta, this is a significant difference, said Ramlachan. Because the spike area is where the virus binds to human cells and where vaccinations are focused, mutations in this region are particularly important.

“This particular variant has been able to accumulate so many mutations because it really infected the right person, perhaps a patient with AIDS with no immune system function who was unable to fight it.

Can cause most severe

So basically the virus took over that person’s body and was able to replicate to the point that the accumulation of the mutations are the highest seen so far in one variant,” said Ramlachan.

“What that means is that it is more transmissible and can cause more severe disease and death and most importantly it can evade immunity.

There is the potential that this virus could put us back at square one, warned Ramlachan.

“I have personally been saying that if we wait too long the virus is going to mutate away from the lethal weapons we have.

“Our weapons would have become commonplace among those enemies. They know how to fight us until we come up with different weapons,”she said.

“It will take a few weeks for scientists to get a better understanding of how well Omicron stands up against the available vaccines. Researchers are already working on new weapons to battle this invisible enemy.

“We are fortunate to have the technology so that scientists could come up with new versions of the vaccine.

“But during the time it takes for vaccines to be produced, there will be more cases and more deaths. That’s why it’s important to get vaccinated, said Ramlachan.

“If you look at the places in the world where variants are emerging they are almost always emerging in places where there are high numbers of unvaccinated individuals, and that is the problem we have.

“People who are unvaccinated are going to be susceptible, they are going to act as viral incubators and that is going to continue until we get to an endemic stage either through natural immunity coupled with high mortality which is the worst case scenario, or we get to the point of vaccination we need to get to which is what we were able to successfully do with polio and also the eradication of smallpox,” she said.

At this point in time the only way to get people vaccinated is by following the model of other countries that have mandated vaccination, said Ramlachan.

“There seems to be a certain level of lackadaisical thinking in T&T. We have one of the highest mortality rates in the region. If that is not scaring people into being vaccinated then I would have to err on the side of mandated regulations,”she said. “History has proven that mandates can work for the good of humanity.

“We have seen that in the case of mask mandates, mandatory vaccines for children, for healthcare workers in the system and for travellers who must have certain vaccines before travelling.”

The emergence of the Omicron variant is bad news but the situation is not hopeless.

The future may see a multi-variant single vaccine that covers more variants which were produced for influenza in the past, said Ramlachan. But we have to get vaccines in arms, we have no other option, that is our only protection, she added.

“We have to remember that we are in the midst of a surge of the dangerous Delta variant. If another variant lands on our shores that may be even more transmissible, increasing severe disease and/or successfully evading acquired immunity, it’s unimaginable what it can do,”she said.

Ramlachan is urging citizens not to skip their booster shots. What happens with SARS COV-2 is that immunity is not long-lasting, it wanes over time as one would expect in coronavirus, she said.

Booster shots are not unusual. Certain groups of vaccines for hepatitis, HPV, and rabies require multiple doses, even three to four doses in order for one to be considered fully vaccinated. Then boosters are required as immunity wanes as well over time.

“Therefore you don’t want to be in a position where your immunity goes away and you are left undefended against the Delta strain or this new strain if it comes,”said Ramlachan.

“You want to be able to get to a level of immunity where you can fight it off so that is why it is so important to get the booster to be able to fight off any onslaught of infection.”

“I knew him very well. In the party, he was invariably non-controversial, low-profile, well-mannered and always very guarded and measured in his utterances.”

A perfect description of the late George Michael Chambers, the country’s second prime minister and political leader of the People’s National Movement (PNM), from Ferdie Ferreira, a foundation member, in his book Political Encounters 1946 -2016.

Stressed out by Covid

Health workers in 11 Latin American countries show elevated rates of depressive symptoms, suicidal thinking, and psychological distress, according to the results of a study led by the Pan American Health Organisation (PAHO) in collaboration with the University of Chile and Columbia University.

Even though panyards across the country have been lying dormant since the start of the pandemic, pannists from Port of Spain and Arima, Chaguanas all the way to South Trinidad are now back in action thanks to the 2022 inaugural “Jam Yuh Set In-De-Rama” competition. The “Jam Yuh Set” steelband competition is the only online pan event for Trinidad Carnival 2022. It is an initiative of the Pan Moving Forward organisation and is the brainchild of its president Aquil Arrindell who came up with the idea late last year.

“We must put the lives and well-being of our citizens first.”

Any incarnation of the staging of Carnival 2022 must make that statement paramount to its planning, says event promoter Randy Glasgow.

Glasgow, CEO of Randy Glasgow Productions (RGP), said recent calls by promoters and artistes to stage “safe zone” concert events around next month’s originally scheduled Carnival dates is premature at best and irresponsible at worst. Carnival 2022 was scheduled to be held on Monday, February 28 and Tuesday, March 1.

Those are the two therapeutic P’s that helped family band Dil-e-Nadan through “a difficult year” say brothers Raymond and Richard Ramnarine.

“Like always, prayers got us through some challenging times. 2021 was indeed one of those moments just like so many others, we braced for the impact, but kept ourselves busy producing music to heal and bring happiness to the world. We kept at it and persevered just to ensure we could pay the bills,” Raymond told the Kitcharee during a WhatsApp exchange on Thursday night.