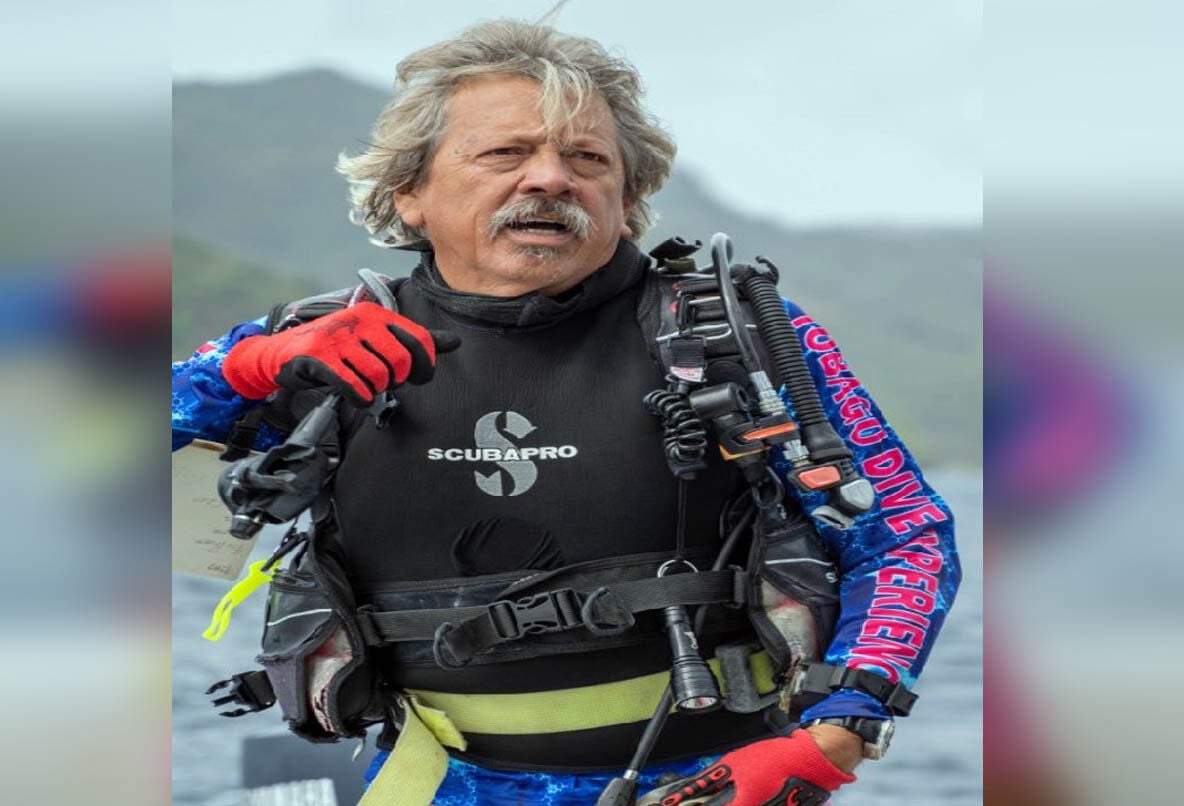 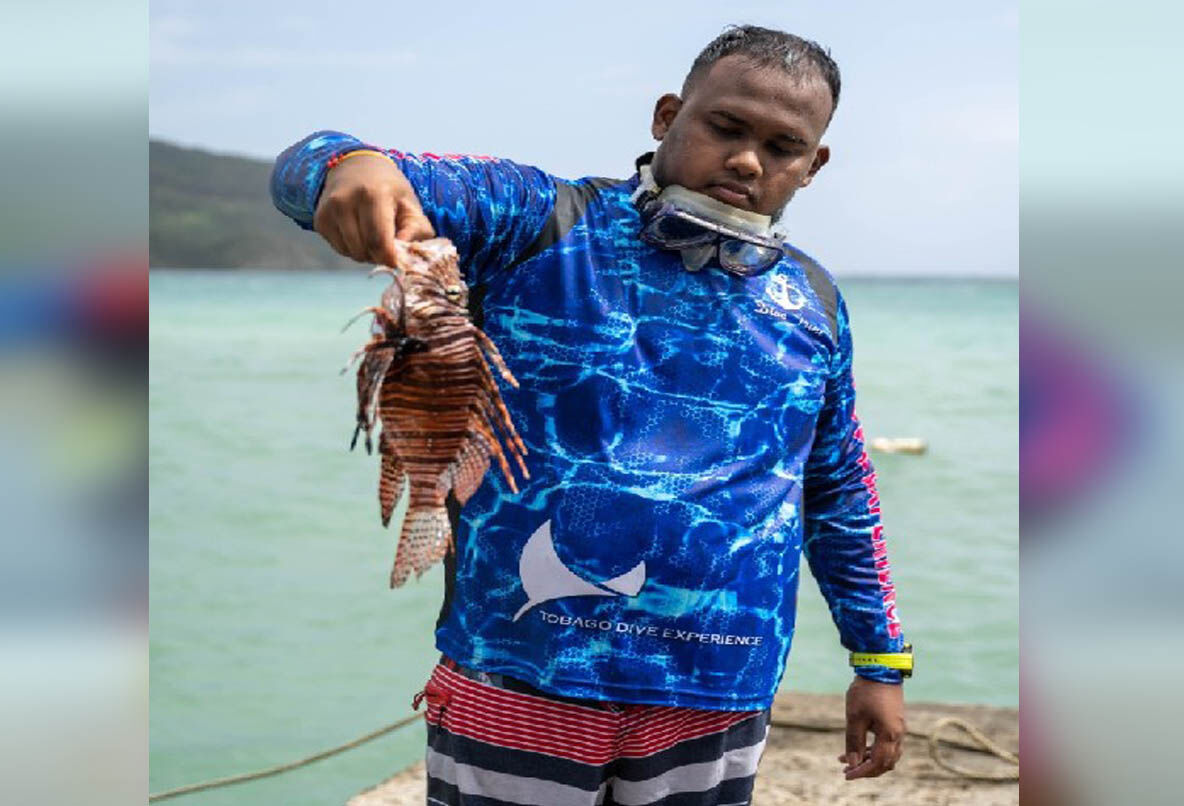 MULTIPLYING LIKE WEED: Diver Pravir Parsotan with a lionfish.

MULTIPLYING LIKE WEED: Diver Pravir Parsotan with a lionfish.

SINCE the lionfish was first reported in T&T’s waters in 2012, their populations have skyrocketed to dizzying levels. Dive instructor at the Tobago Dive Experience and Manta Lodge Sean Robinson estimates that there are now hundreds of thousands of lionfish in our waters. This spells disaster for our marine ecosystems that are under attack from this beautiful yet dangerous species.

With no known natural predator, the only thing that could possibly stop the lionfish in its tracks are divers with spears. But even that is not possible under the current circumstances. The highly anticipated Speyside Lionfish Derby which had been scheduled for the weekend of May 29-31 had to be cancelled when the country came under tighter Covid-19 restrictions.

With no one to hunt them, the lionfish have been left in peace which is bad news for anything that lives under the surface of the water.

“We had a very active lionfish eradication programme going on but since the Covid lockdown the situation involving the lionfish has become worse. Not being able to dive as regularly as we used to and not having the number of clients who would participate, the lionfish has grown in steady numbers,” says

Robinson who has more than 30 years of experience in commercial and recreational diving says, “This means that a lot of the local fish are being eradicated by the lionfish so we are seeing in certain areas that there is a decline in the smaller species of fish.”

Robinson said the damselfish are just one of the fish species that have been hit hard by the lionfish. In the early stages of the lionfish invasion there was a very strong educational campaign spearheaded by the Institute of Marine Affairs (IMA). Because the lionfish is popular in the culinary world, efforts were also made to turn it into a commercial species so that it would be targeted by spearfishermen. Over the years those initiatives have helped create awareness. However not enough has been done to control the lionfish, said Robinson.

“The ultimate goal is to get rid of them because they are invasive and they have no natural predators,” said fellow diver Pravir Parsotan.

Both Parsotan and Robinson say there are hundreds of thousands of lionfish in our waters. What can account for their high numbers?

Apart from their voracious and insatiable appetite, lionfish also have a rapid life cycle and a high fecundity—or ability to produce offspring.

“Every single month, a lionfish will spawn. It’s the perfect pest, you’re talking about 30,000 eggs each time they spawn and they can live down to depths of 400-500 feet. The problem is that we have limited depth range to where we can dive so what we are seeing is only a snapshot of what is really out there,” says Robinson. “Until there is a natural predator which does not currently exist, the only way to control lionfish—that we know about—is through diving when we shoot them off the reefs. There are some organisations that have been trying to develop specific lionfish traps but they are still in the testing phases.”

Robinson recalls observing one or two lionfish on certain reefs only to return within two months to see an influx of lionfish.

“It’s like you weed your garden and leave it for a month then when you come back you have double the weeds you had before,” he says.

There must be an ongoing campaign to control them, at this point it is impossible to eliminate them, said Robinson.

“We basically have to live with them, but we must control them,” he says.

Given how quickly they reproduce, Robinson estimates that several divers need to be on dive sites hunting lionfish at least five to six times per month if they are to effectively control the populations.

Through organisations like PADI, children and adults are taught about the lionfish and how to safely capture and handle them. Thanks to these lionfish specialty programmes a lot of divers have become interested and have actively participated in the eradication. Robinson wants to establish an annual lionfish derby event where teams compete against each other to collect and remove as many lionfish as possible. Lionfish derbies such as the Speyside Lionfish Derby not only help eradicate lionfish, the data that has been collected has aided research and other efforts to conserve the reefs. Chefs were also brought on board to promote the culinary uses of the lionfish and artists have even incorporated the lionfish in their jewelry designs.

Marine biologist and diver Jade Asiu has been involved in lionfish removal for a while and was looking forward to the Speyside Lionfish Derby that was expected to take place in late May. As a recreational diver who is currently finishing her divemaster training, she has seen first-hand the devastating effects of lionfish. Persons are naturally curious about the lionfish, being knowledgeable about the species has been an advantage for Asiu.

Robinson laments that the environment is of little concern to the Government which he says doesn’t understand the benefits of having a secure environment around us. There is no lack of interest around the lionfish, he says, but there needs to be more awareness concerning the lionfish invasion and how it impacts our marine ecosystems. Additionally more resources need to go towards curbing their populations.

“We need to keep the awareness about lionfish going,” says Robinson.

The organisers of the Speyside Lionfish Derby are hoping to have a derby before the end of the year but as for when that would be—that is anybody’s guess.

Anyone who is interested in learning more about the lionfish can visit www.reef.org.

Things are gonna get better

A song that is truly an evergreen soul classic originally recorded by the Five Stairsteps, that has been covered by a host of artistes, among them the likes of Nina Simone, The Spinners, Mary Wilson, Kirk Franklin with Donnie McLurkin and Kelly Rowland, and even sampled by Janet Jackson in her song “Truth”, has now been covered by a Trinidadian artiste alongside his daughter, just in time for the Father’s Day weekend and to also bring some positive vibes in this time of the Covid-19 pandemic.

Delivering what can only be summed up as the right message at the right time, local artist, Ziggy Rankin has released a major collaboration cover for the 70s single, “O-o-h Child”.

Walking across the agricultural fields of Cumuto South, Barrackpore, the grass was still wet with dew at seven o’clock in the morning. The earth was squelchy and crunchy to the footstep. Crunch, crunch, crack, oh no! This was not stable soil underfoot at all.

There should be more platforms that encourage female empowerment and for the voices of girls and young women to be heard. With this in mind, Girl Be Heard (GBH) has created a programme which utilises storytelling, theatre and arts and other socially conscious initiatives to create change.

PEOPLE are finding it difficult to cope with the pandemic, far more so for parents of children with special needs, says Kelvin Thomas. The husband, father and graphic artist ought to know. Thomas and his wife Patricia are the parents of 12-year-old Kinaya-Joy who was diagnosed with Down syndrome and autism. Kinaya-Joy is non-verbal and also in remission from leukaemia. Due to the cancer treatment she received, Kinaya-Joy’s oesophagus has been reduced to three millimetres which means that she can choke on something as small as a rice grain, therefore her parents must purée all her meals.

LOVE as deep, as wide as an ocean

“YOU give me love like an ocean... deep and wide,” sings gospel artist Abigail Roberts in her latest single “Deep and Wide” which was produced by Jabari Bowman of JSB Productions.