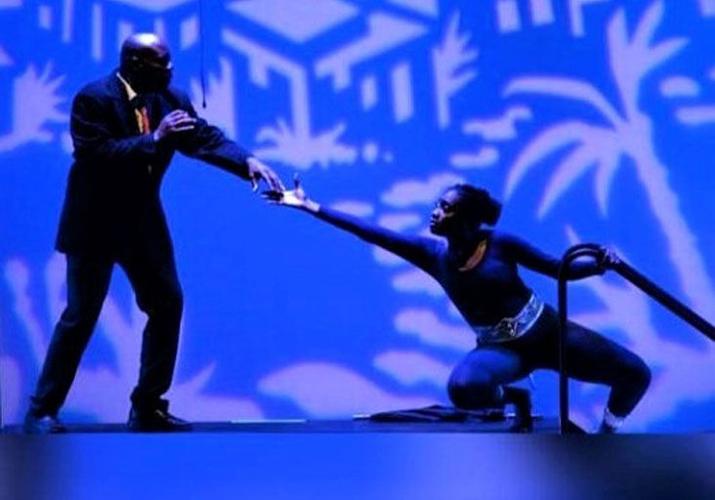 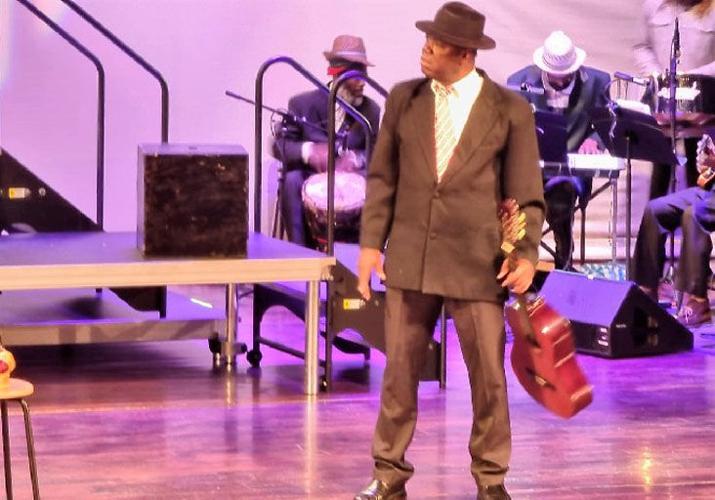 Director Geneva Drepaulsingh creates out of Constance’s work an existentialist tour de force as the Ghost of Carnival Past, portrayed brilliantly by Chennel Cupid, in the form of a Jab Mallassie, equipped with horns and tail, takes Kitch on his final journey through his star-filled life, the Carnival figure ushering, shooing him into the different scenarios of his career and always seemingly lurking in the background like a celestial watcher.

The Road takes the audience on a trip from Lord Kitchener’s first appearance in a Port of Spain tent in 1943 singing his illustrious “Green Fig”, to his sojourn in London and then his reappearance in Trinidad. The play makes a full circle/cycle to end with Kitch’s funeral, but the theatrical journey is not that simple and we do not escape so easily. We are forced to join the musical ride as Kitch weaves his way through the cold of England, with his calypso brothers, such as the Mighty Terror, to the warmth of the cleansing fire that changes the Port of Spain landscape on his arrival back home.

The Road is naturally filled with the calypsoes of his career and when we think that it is the task of the cast to sing and interpret the glorious lyrics and melodies, Drepaulsingh invites us on the stage alongside the Ghost of Carnival Present (yes there are three ghosts like the ones that haunt Scrooge in the legendary Dickens tale). This phantasm, played by Eunice Peters, is the essence of the circus ring master “Step right up!”, who summons the unsuspecting payees to become, for a brief moment, calypsonians who must sing two lines of a Kitchener calypso to keep his memory alive.

The production unearths some interesting moments. Kitch at the Sunset Pub, surely a fictitious name here, but the grandmaster actually worked in and even managed a pub in England. He is confronted by two characters, an imposter who masquerades as an American hoping to use the success of “Rum and Coca Cola” to fleece unsuspecting attendees and the female band singer who offers more than song to the too willing wandering troubadour. Both are played to perfection by Emanuel Ansolia and real life calypsonian Meguella Simon, her duet with Kitch ‘Ah want a small comb to scratch yuh head’’ played to the delight of the audience, its salacious lyrics tickling our fancies.

The highlight of the play for me is Kitchener’s tearful admission that his most savoured wish is to be honoured with the Trinity Cross. But first he is tormented by the women of his calypsoes, now the girls of his nightmare, as the very women, about whom he had written and sung, now confront him seeking release from the torment of their lyrical prison. “We want to become real women, not women in a song”… as they re-enact the lyrics of their sexual embarrassment - Doreen [“In the Bamboo”] Gemma [“Battymamselle”], Audrey [“Gimme the ting”]. Having tormented him he grants them suitable apologies and hesitant release and with it their right to transition from the lyrics on the page to the real life demons of the theatre, except for… one …

Joseph Lopez as King Sparrow, in a marvellous cameo performance with some of the women who made him famous [Mae Mae, Lulu et al], creates a lively moment as he imitates the Birdie’s gyrating movements to the proverbial T. Andrew Friday is the last Ghost, remember there are three, who does something special as he leads Kitch through one final torment… demanding that he write one more calypso and atone for his rejection of the Trinity Cross.There is a tear-jerking moment here when the Ghost taunts Kitch “Look Sparrow take he Chaconia medal and eh make no fuss, like yuh feel you better than Sparrow?” Kitchener responds with a soul rendering catalogue of his past achievements and ending with the poignant confession “I really wanted the Trinity”. If you feel that emotion is how you will leave the theatre... there is one more surprise as Kitch passes on the legacy like Scrunter’s “Will”… well if I disclose the details you won’t want to see it for yourself, won’t you?

Kurtis Gross has graced the stage in many a calypso musical, from Rawle Gibbons’ debut 1991 Sing de Chorus as Siparee, to Zeno Constance’s De Roaring 70’s as Kaisoman. But trust me, the Grandmaster is the role he was born to play. From the opening movement he looks and sounds exactly like Kitchener, Kernal Roberts backstage declaring ‘you sound just like daddy, boy!’ It was as though Kitchener had returned from the grave to thrill contemporary audiences, in the times of oca singer Voice.

There are many great performances enhanced by the spectacular sound and lighting effects. Marcia Larode as the Old Woman and Leekeesha Duncan as the Reporter give us a comically enhanced moment. As a member of the audience, who was able to win a prize by singing a few bars from a Kitchener classic, “Spree Simon”, my mind drifted to the various cities overseas in which I was privileged to view musicals like the Phantom of the Opera, Fela, Wicked, Hamilton and others, I left SAPA on a musical and theatrical high with the feeling that Zeno Constance’s, Road Make to Walk, is deserving of national acclaim and should be played in some of the prestigious theatres in metropolitan capitals. By the way, there are some guest performances by some calypso legends…

The production goes next to NAPA in the capital. It’s a most fitting tribute to the Lord Kitchener to be played fittingly in the auditorium named after him. It’s a one-night stand [no pun intended] and whether for calypso aficionado or theatre lover, De Road does supreme justice to Kitch on his 100th birthday when the call for the ORTT is being echoed thought out the land.

Road Make to Walk, performed at SAPA on June 11 and 12. This was submitted by Eden Charles former teacher and former Trinidad and Tobago ambassador.