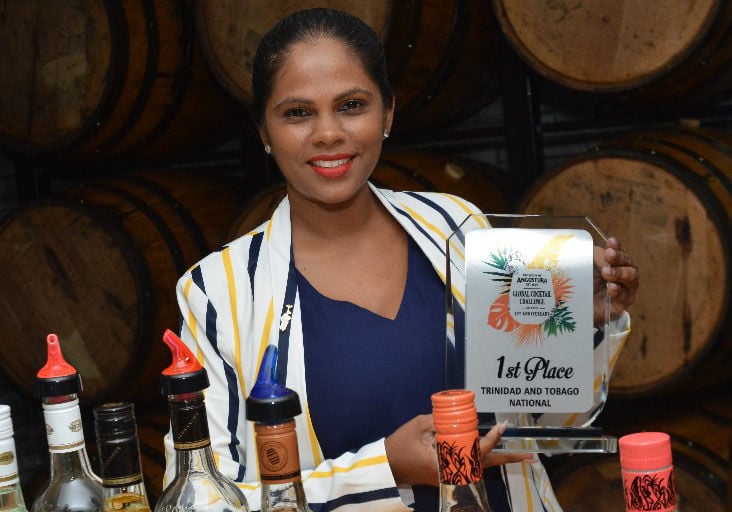 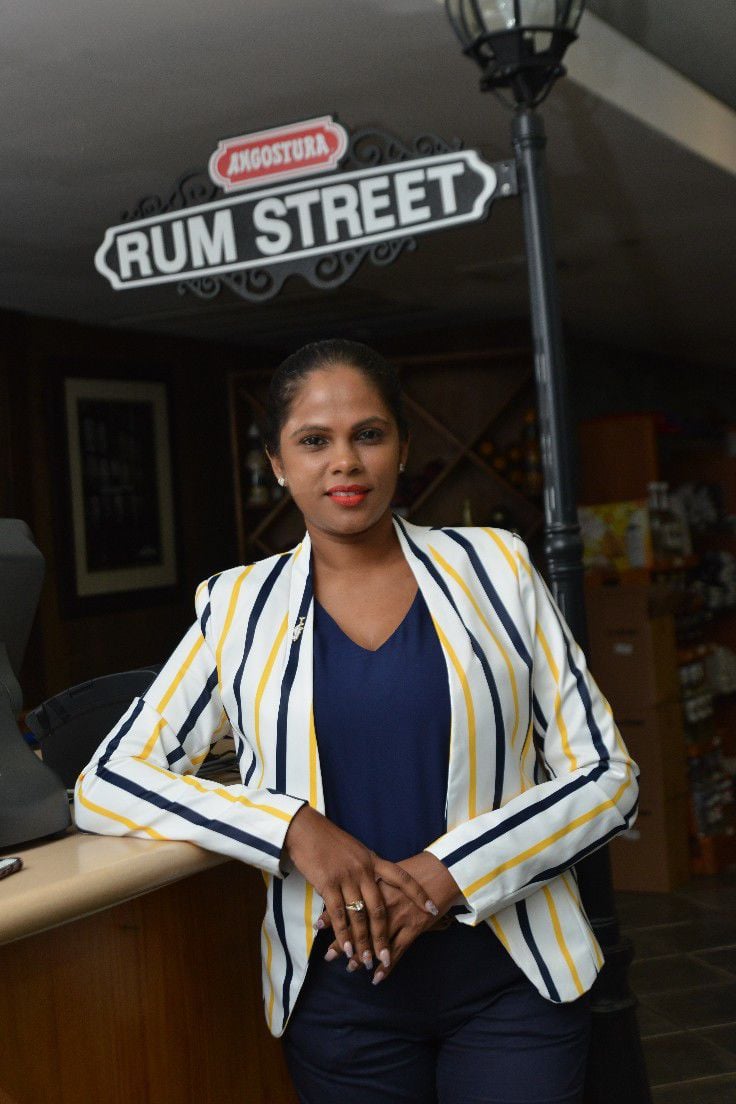 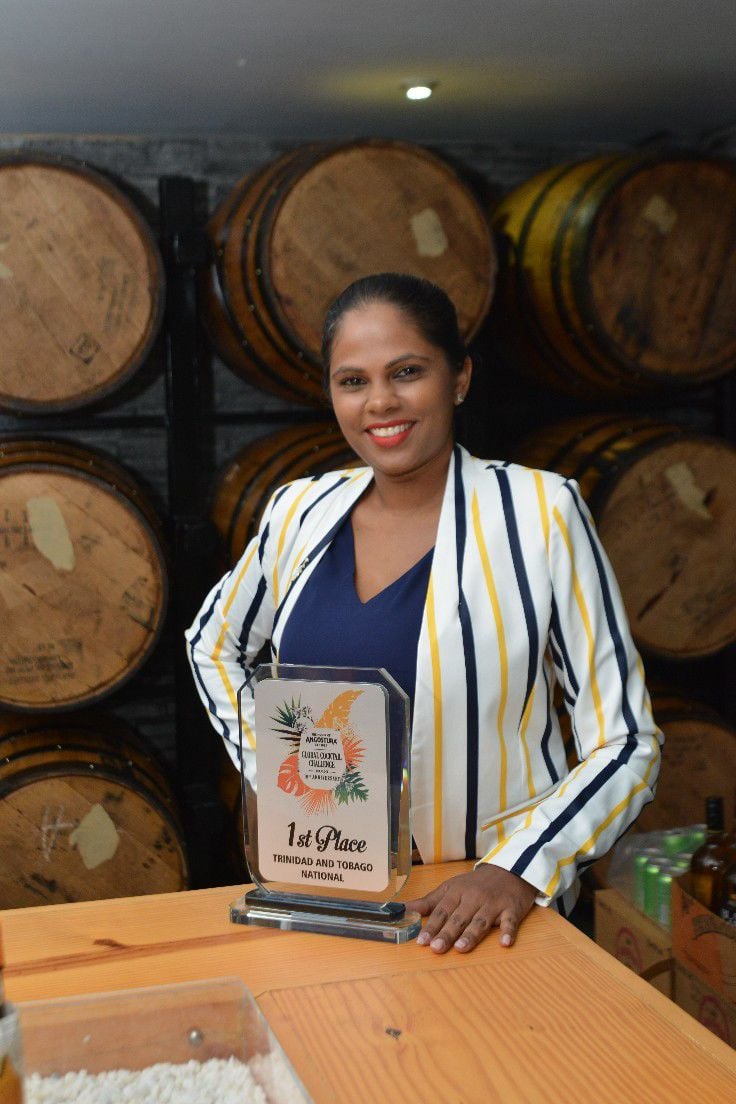 Shana Rajahram is the best mixologist in Trinidad and Tobago.

The diminutive bartender earned that title and the $10,000 first prize at the local leg of the Angostura Global Cocktail Challenge, held on Monday at the Angostura Hospitality Box, Queen’s Park Oval, Port of Spain.

Shana will now represent T&T and the region at the finals of the competition to be held at the Hyatt Regency in February, 2020.

“I had my first drink in my 20s. I was a very obedient child,” the champion blender said through a wide smile when she sat with the Kitcharee, on Wednesday, at the House of Angostura in Laventille.

Though Shana developed a late taste for alcohol but her love for bartending was almost instantaneous. The Chagaunas-born barmaid said she was immediately enamoured by the grace and art of the bartenders while waiting tables at a small restaurant in her hometown.

“I fell in love with what they were doing. The passion they showed. You cannot be a bartender if you don’t have that passion. A lot of people don’t do well at their jobs because they don’t have the passion of it and I understand that now,” she said with a convincing nod.

The eager bartender won the second competition she ever entered. To this day Shana, however, is shocked by that result.

“I felt like I didn’t deserve it. I think a win should be when you really understand what you’re doing and I didn’t quite understand what I was doing just yet. The judges saw something in me that I didn’t see in myself,” she said.

Women behind the bar

As a full time bartender Shana quickly became a regular on the competition circuit. She was openly embraced by customers of both sexes, but shockingly didn’t find that same level of acceptance behind the bar.

“As a consumer guys love to see a female behind the bar. But from a bartender to another bartender it was a threat. Did I feel the love back then? No.

“It is dominated by men and they feel women trying to take over everything, but it’s not that. A lot of people have passion for different things and this is where my passion fell,” she said defiantly.

Shana also quickly learned that most bartenders kept their techniques and recipes close to their chest. With no physical mentor to emulate she studied through observation the techniques of the leading mixologists she encountered.

“There are people that inspire me just by their actions. They are silent mentors. I see them travel around the world and I think look at how he sells it. Look at how he presents. And I became better,” she said with a mischievous grin.

“I really started to follow his work. The Queen’s Park Swizzle (cocktail) was really trending at that time and is still trending. He reached out to bartenders and shared knowledge. I called him and asked him a question and he just threw information out. I never had anyone treat me that way,” she said.

Despite her success and growing reputation Shana says she is still underestimated when she walks into a competition scenario. She used that non-descript persona to win the Caribbean Bartender of the Year award at the Taste of the Caribbean culinary competition in Miami last year.

The key to being rated as a great bartender is a combination of constant experimentation behind the bar and ensuring you consistently provide quality service to those standing in front of it.

“I try to treat everyone like royalty. The janitor needs to be treated like a CEO. Just by the way you approach people determines if they will come back to you.

“As for your work behind the bar, yuh know they always say doh trust a skinny chef, so you have to try everything. I have created and won with cocktails with ingredients I doh like at all,” she said.

Shana has set her sights on assembling an all-female bartending team. That and setting a good example for her young daughter remains her main focus.

“I’m still connecting the dots. I never knew I’d find this passion and most of all I want to be a role model for her, she really supports me. She is my number one fan.

“I have a really strong team and I choose to take people with little to no experience in bartending because then I can shape them into the right fit for our team. So you may have no experience, but you have a passion for bartending, then I want to work with you,” she concluded with a wide warm smile.

There is a link between the deadly Man O’ War and leatherback turtles.

Pioneering music produ­cer and living legend Kenny Phillips has stepped out from behind his famed mixing board into the bright lights of centre stage with his provocative 2020 calypso debut, “Wack Dem Kenny”.

The tech of sports

With the advent of the Internet and smartphones, pornographic websites and material are more accessible now than back in the days when they were limited to ‘dirty’ magazines.

Ganja anthems have been a staple in popular music genres for decades. Now that Trinidad and Tobago has decriminalised marijuana, making it only legal for adults to have up to 30 grammes, the “herb” has been a hot topic, and now a boon for calypsonians like Crazy (Edwin Ayoung), to pen their lyrics on the issue.

Farenite stands at the core of a new age of local gospel singers that continue to take Christian musical themes into mainstream spaces. While the talented vocalist refuses to comment on homegrown gospel within the current Carnival context he remains adamant that the music has always been relevant.