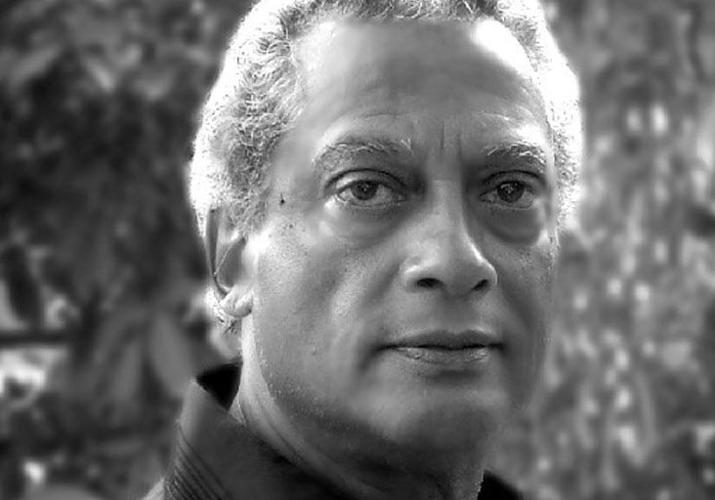 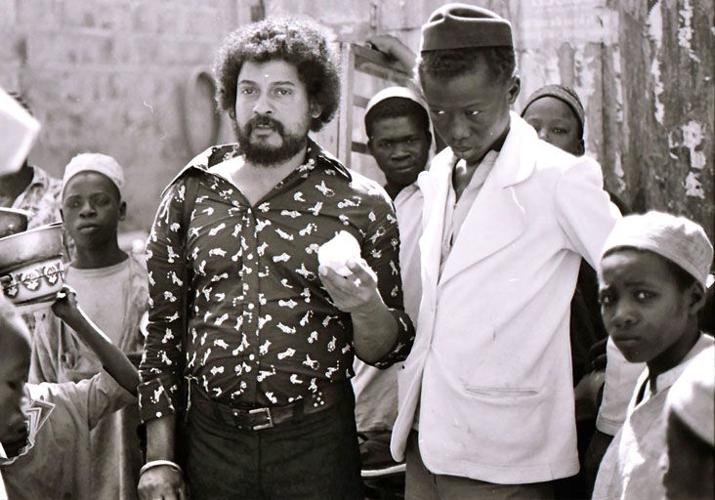 The Belmont-born filmmaker, photographer, painter and writer has built a prolific career in film and holds the Guinness World Record for being the first black British filmmaker to direct a feature-length film, Pressure (1976). Ové has documented racism and the Black Power movement in Britain with films such as Baldwin’s Nigger (1968) and Dream to Change the World (2003). His documentary works Reggae (1971) and Skateboard Kings (1978) are studies for emerging filmmakers.

Ové, 85, was recently made a Knight of the British Empire at the annual New Years Honours ceremony, for his pioneering contribution to British cinema and media. Although there are few less deserving of that title than the man dubbed the godfather of black British film-making, the irony of the empire bestowing one of its highest honour on one of its fiercest critics is not lost on his son, artist Zak Ové.

“I think his knighthood is in celebration of him being a forebearer and an artist speaking to and for black Britons. It’s recognition of his contribution to make Britain a better place. His message is unless you pay attention, these problems will remain yours for decades to come and its time you recognise these young black Britons as your own,” Zak told the Kitcharee during a WhatsApp exchange Friday.

Zak, a respected sculptor and visual artist, curated “Get Up, Stand Up Now” at Somerset House in London in 2019, in tribute to his father’s life and his art to show the connectivity of the framework of artist that arrived in the United Kingdom (UK).

“I saw first-hand how Horace Ové’s stories were still such a powerful tool for people to connect with. As a black person growing up in Britain, you will have heard your parents’ stories of their racial struggles, but nothing is more powerful than putting images and film to those stories and seeing them come alive.

Zak describes his father as “an artist compelled to create”. One who ensured that at a young age his children—Genieve, Zak, Indra, Ezana and Kaz—were given a voice.

“His chosen tools as a young man were the exciting mediums of his time - namely, photography and film. Horace, like many photographers of the pre-digital age, worked to find that ‘one image’. He endeavoured to put himself in the moment; stepping on toes, pushing his way in, making sure he could capture his image,” Zak said. Lost in the act of creating, Ové was never focused on making or leaving a legacy, Zak dictated.

“I don’t think that as an artist in the moment of creation, one ever really thinks about legacy. The ‘future maybe’ is not relevant or pertinent to the act of making. The artist makes work in the now, the present, and that too is what Horace did. He was firmly in his present time,” Zak said.

A debut in a time of war

Ové was born to shop owners Lawrence and Lorna on December 3, 1936, in Belmont. His formative post-war years were shaped by a turbulent multicultural society, driven by radical philosophers and colonial unrest. He witnessed the rise of the pan as the new sound of the working class and grew up in the calypso era of the “badjohn”.

In a 1996 interview with the British film publication Black Film Bulletin, Ové recalled falling in love with cinema as a young boy living in Port of Spain.

“I came from Trinidad where I was influenced by cinema and television so I was a real cinema bug. From the age of nine I wanted to be a filmmaker, something that I never told anybody in Trinidad about because at that time they would have laughed at me.

“I watched every type of film: from action movies to the very serious dramatic films of the 30s, 40s and 50s. Trinidad had a proliferation of cinemas when I was growing up because we had seven American military bases on the island, so we were lucky enough to have many cinemas. I went to one little cinema in my area called Olympic Theatre, and that’s where my whole exposure to cinema started,” Ové said.

Ové’s film style is inspired by Carnival and his experiences growing up in colonial Trinidad, Zak said.

Once he migrated to the UK in the 1960s Ové took the splendour of the mas to the streets of London, helping to establish the now world-famous Notting Hill Carnival, in the British capital. He exchanged ideas openly with a close-knit group of West Indian writers, playwrights, poets, dancers, musicians and singers in West London

“Born from the theatrics of Carnival and a multicultural Caribbean, Horace would develop an intuitive and filmic style of his own—a black aesthetic film language with which to tell his stories. His visual commentary across all the mediums, pictorially documented how for the first time articulate black voices stood up to hold the world accountable for the neglect and injustice that had been our history and story up until that moment. They were a hip crowd and they knew the importance of their voice and their right to exist on a level playing field,” Zak continued.

Ové investigated what it was to be black in Britain at that time. His 1971 film Black Safari, a spoof documentary following a group of back explorers searching for the heart of the UK parodied the white explorer narrative.

“My father keenly observed the time he found himself living in and had the insight to record and transcribe, through film, photography and scripting. There are not many individuals from the ’60s in Horace’s position that did that; only a handful in fact, and that in part is why Horace’s work and legacy hold such relevance today as we look back at his work and question where we find ourselves today; politically, racially and socially.

“In Black Safari, this historical attitude is turned on its head. Britain and its inhabitants instead come under inspection and are found wanting. It undoes the notion of what is regarded as ‘known’ and thereby familiar and ‘right’. The importance of this type of parody lies within humour as a leveller. If you can laugh at yourself then you might rethink your point of view. Parodic racial comedy creates an opportunity for an uncomfortable, personal ‘self-check’ in the viewer and in so doing, develops a narrative for public multicultural education,” Zak said.

The purist form of expression

Zak believes although now pivotal and important his father’s work was simply at the time an expression of his own individual humour and perspective as opposed to a deliberate attempt at deeper self-analysis.

“When I think about his legacy on a personal level, it was Horace’s natural ability to question—that is his legacy to me. Horace was always a big personality, a force. He taught me to question and to speak up; not just for myself but for others that couldn’t; for injustice and equity, and not to worry if I made people uncomfortable around me whilst doing so. He showed me how to stand up to a situation and make it count,” Zak said.

Zak recalled working alongside his father on the 1985 film on the Bhopal gas tragedy in India, Who Shall We Tell. He said Ové insisted on bringing a human side to the disaster in the face of the impersonal news reports focused on its legal and political implications.

“Horace was determined that these people were seen as that; people, like you and me,- not just a bunch of Indians thousands of miles away.

“Giving voice to the common individual, whoever that may be; telling their story, being sensitive to that person’s issues and struggles, is the basis of Horace’s work and why it shines through today,” he said.

More than a father Ové has been a brother and a friend to Zak. He shared the keys to his kingdom and validated the opinions of his children.

“In many ways we fell in love with his passions. That’s what real inheritance is. I guess in my own practice, I feel I’ve come full circle. That maturity has taught me how important his legacy will always be to me. That legacy is really about choosing to act when faced with injustices, and realising the change is yours to make. I still look at life through his lens. It helps me to focus on the decisions I make and where to put my energy,” Zak concluded.