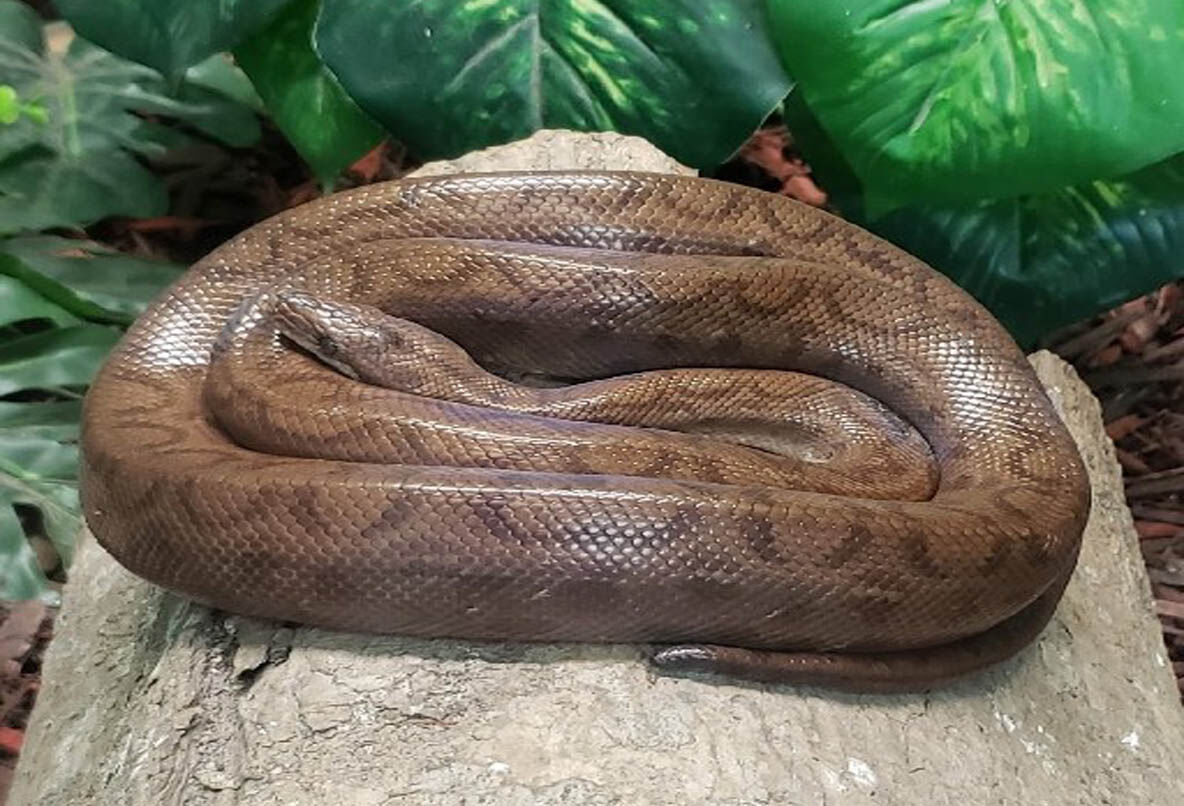 NO NEED TO BE ALARMED: Rainbow boa at the Emperor Valley Zoo. 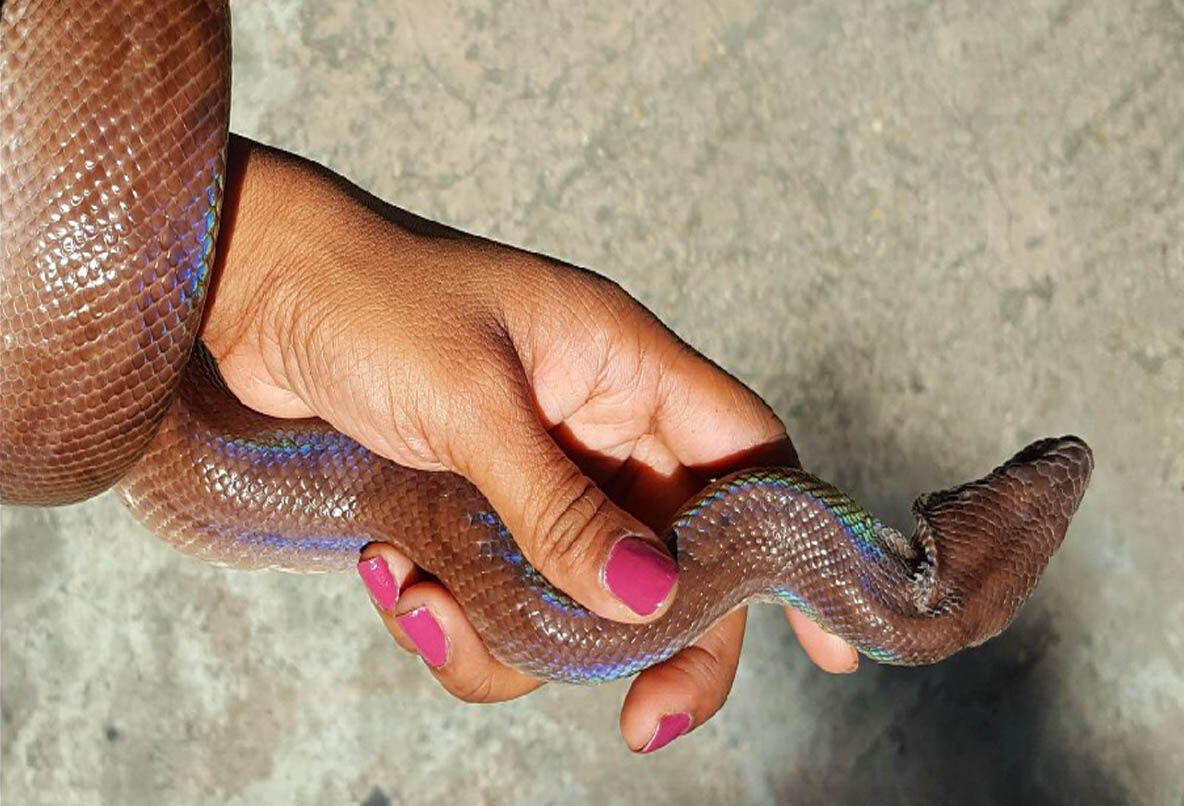 IT’S A BEAUTY: Do you see the rainbow colours? Rainbow boa in the sunlight.

NO NEED TO BE ALARMED: Rainbow boa at the Emperor Valley Zoo.

IT’S A BEAUTY: Do you see the rainbow colours? Rainbow boa in the sunlight.

One would typically not associate the words rainbow and snake in the same sentence. Believe it or not, there is a rainbow snake found locally! It is called the rainbow boa and most of us have seen one of its kind at one point or the other in our lives.

When one encounters a rainbow boa, it may not look anything close to a what its name describes. Out of the sunshine, the rainbow boa has a uniform brown colour throughout most of its body. However, magic occurs when this reptile slithers into the sunlight!—all colours of a rainbow reflect off of its skin! It is truly a stunning sight!

What is the science behind this phenomenon?—There are tiny ridges on the scales of the snake which act like prisms. These ridges refract sunlight and this accounts for the rainbow-coloured effect on the snake’s body!

Sammy, the rainbow boa at our local zoo, has grown quite popular as this snake ambassador for education, when handled in the bright natural light, his true iridescent sheen is revealed.

Although found residing in forested areas, this snake species is quite often spotted near our homes, schools or workplaces as development continues to encroach on wild habitats. No need to be alarmed, however, as the rainbow boa is non-venomous by nature and means no harm. Once left undisturbed, this beautiful serpent would have no reason to defend itself. Many times, the rainbow boa, which can reach an average of up to three to five feet in length, when startled, slithers away to safety.

The rainbow boa, like other snake types, is a critical component of our local ecosystems. Not only do these constrictors feed on small animals such as birds and lizards, but also act as a natural pest control of rats and mice.

Another interesting fact about this rainbow snake is that, unlike most snake types, females give birth to live young. Eggs are produced, however, they are retained inside the mother’s body until hatching occurs, so that live offspring are then born. Young are fully developed and independent within minutes of birth. The babies exhibit noticeable markings throughout their bodies which fade as they grow.

It must be noted that, not only is the rainbow boa remarkable to look at in the sunlight, but is also a locally protected species. Being mainly nocturnal, this boa would be most active at night and retreat to mostly staying hidden during the day. If one is spotted on your property, the necessary authorities should be contacted for the safe removal and relocation of this local gem to a wild habitat away from human habitation.

Snakes are not normally a favourite among many, but the rainbow boa is worth the view. So next time you cross path with one of these animals, hope the sun is out in all its glory, so you can catch a glimpse of the glitz and glamour of our local beauty of a snake!

“If you go ah party and you eh hear ‘Meh Lover’ de DJ eh cool. If you doh hear ‘King Liar’ you eh laugh. And if you eh hear ‘We like it’ and ‘Disco Daddy’ you eh party yet!”

JUDGING from the kudos director and producer Willie Singh has received from international film festivals for his short film Temptation, he is well on his way to making a name for himself in the local film industry. Singh was the only Trinidadian filmmaker honoured at last year’s Engage Art Contest where his film won honourable mention. Temptation also made the rounds at 13 international film festivals where it won Most Powerful Film, Best Cinematographer, Best Covid-19 Lockdown Film, Best Visual Effects and Best Religious Short Film.

More than painting pretty colours or placing a random design on canvas, international artist Wilcox Morris intended to make a statement, to express his philosophy, and to “provoke some thought that one should not be complacent at any point in life you may be,” he once said.

Making peace with his past

IN the 1970s Rupert and Jeanette Cox left Morvant and went to live in the forests between Matelot and Blanchisseuse where they began a social and spiritual revolution. They came to be known as the Earth People. Jeanette became “Mother Earth” and her husband took on the name “Good Shepherd”; they renounced clothing, burnt all their material possessions and roamed the forests naked. They were the subjects of the book Pathology and Identity: The Work of Mother Earth in Trinidad by Roland Littlewood.

Good Lord, I have been through so many troubles, fought so many battles, wondering how I was going to overcome my tragedies... But I learned how to go down on my knees.. And pray... So not I am here today... no longer in misery but on my way to victory...

A new study suggests that a Sinopharm vaccine offers poor protection from Covid-19 among the elderly, raising questions for dozens of countries that have given the Chinese company’s shots to their most vulnerable populations.