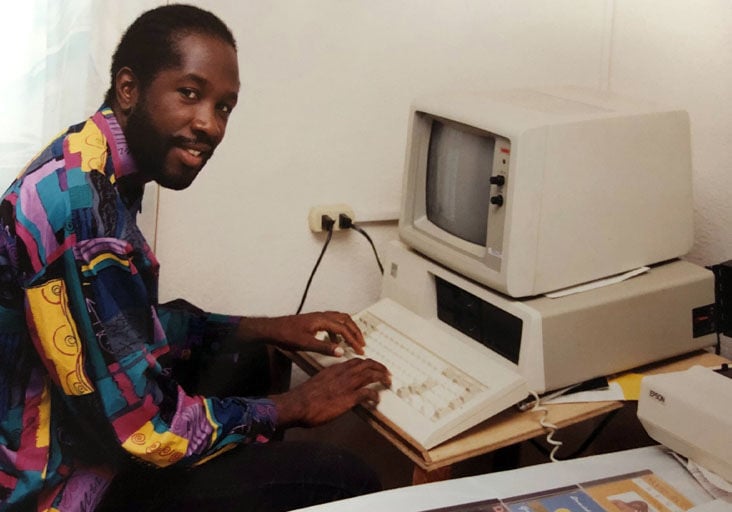 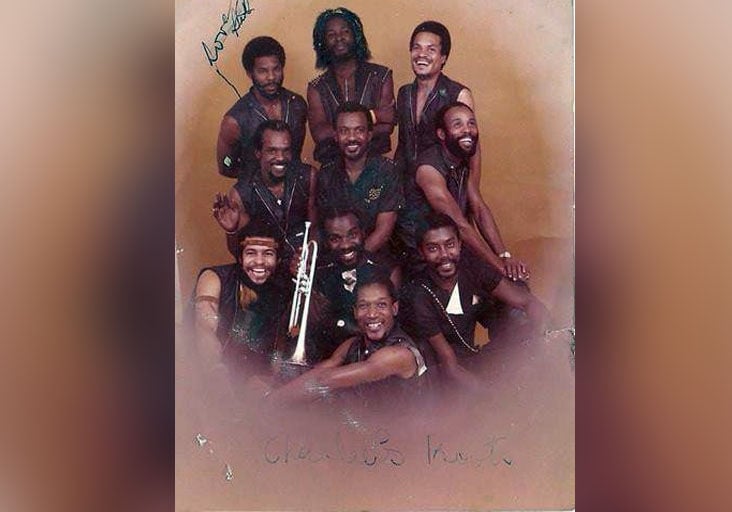 Editor’s note: During the 1980s to the 2000s the soca bands drove the fetes. The level of energy generated by the musicians and frontline singers fuelled the fete goers, keeping them moving non-stop for hours on end. In the early days there weren’t any digital instruments, the musicians created the sounds of music through raw talent and skill. The vocalists sang without any digital leads supporting their vocals or any autotune enhancing their voices.

Singers like Steve Sealy, Christopher “Tambu” Herbert, David Rudder, Colin Lucas, Ronnie McIntosh, Ajala, Russel Cadogan, Leon Coldero, Wayne Rodriguez, a young Machel Montano and many other greats, sang for hours on end without flinching. They commanded thousands of feters. sometimes getting them to do the craziest of things with just a command and a hand movement.

The soca bands contributed to Trinidad’s Carnival beng the Greatest Show on Earth and to soca music’s journey towards becoming the phenomenon that it is. To jump up on the streets to the live music of the soca bands in the 80s was an awesome, unforgettable experience. Unless you were in it, you just won’t truly understand. In this edition of Kitcharee we look back at three of the great soca bands that once ruled the fetes and the road. In the coming weeks we will feature some of the other bands that brought us joy.

• Shandileer, which split around 1986 into: Carl & Carol Jacobs and also new version, Massive Chandileer (with Ronnie McIntosh) came to the fore

• Pranasonic Express, which evolved into Xtatik and then Machel Montano HD

• Also, Byron Lee and the Dragonaires from Jamaica were a constant presence from the 1970s onwards. Thanks to Martin “Mice” Raymond, producer/engineer/ UTT lecturer for his assistance.

Originally Sensational Roots, a coming together of the islands most talented and influential young musicians in the 1970s, the band went on to dominate the soca circuit for over two decades, and penetrate US and European music markets in an unprecedented manner.

Under the leadership of iconic music producer/arranger Pelham Goddard, Roots grew beyond a mere band into a full-fledged musical movement. In 1976 Goddard led an inspiring group of studio musicians that included the likes of late great guitarist Anthony Voisin, late bassist Eldon Oliver, drummer Vonrick Maynard, conga player Clarence Ross, pannists Lambert Philip and Keith Moore among others at a then famous KH Studio in Sea Lots, Port of Spain.

“We were a bunch of studio musicians creating and experimenting with soca music and making hits for KH records and their distributors Charlie’s Records before coming out as Charlie’s Roots,” Goddard recalled when he spoke to the Kitcharee about the genesis of the Roots era on Thursday.

Goddard said as a group Roots was self-aware of the advancements they were making and the impact their work was having on the face and sound of soca music globally.

“We knew the significance of what we were doing because it took the world by storm and we were in demand in all the fetes starting with Peter Minshall and going to Grenada carnival in 1978,” he continued matter-of-factly.

Tobago-born businessman Rawlston Charles, owner of the popular Charlie’s Records in Brooklyn, New York, took note of the exceptional work of Sensational Roots back home in T&T. A year later in 1977 he became the band’s official sponsor and oversaw the launch of Charlie’s Roots’ debut performance at the launch of legendary mas man Peter Minshall’s 1978 Carnival band Zodiac.

Charles, along with KH Studio manager Ellis Chow Lin On, took the monumental decision to bring the band on the road to perform soca music live under the moniker: Manhattan Charlie’s Roots.

The rise of David Rudder

Rudder grew in stature with Charlie’s Roots and in 1986 took his first steps to the legendary iconic status he now holds in calypso and soca music when he made a clean sweep of the Young Kings, National Calypso Monarch and Road March titles with the timeless “Bahia Girl” and “The Hammer”.

Rudder, along with the band was signed to Warner Brothers following that record-breaking season and did promotional tours to England, Italy, France, Finland, Sweden, Holland, Belgium, Brussels and Germany, as well as across the US and Canada

“Looking back and knowing what I know now, l could now truly appreciate the power of that moment in time,” a nostalgic Rudder told the Kitcharee on Thursday.

The calypso stalwart said while the focus at the time was on making quality music there was a level of awareness and reverence to the history they were creating in real time.

“I think that some of us were aware, especially those who worked a lot in the studio at that time.

“After all, we were the go-to band in the studios at that time. Something like what Sky and Robbie are in Jamaica,” he said.

On the invitation of Byron Lee, Charlie’s Roots was the first T&T band to play at Jamaica’s very first carnival. During that time the band also shared the stage with internationally acclaimed performers including Michael Jackson and the Jackson 5, Barry White, Kool and the Gang, Third World, Steel Pulse, Miami Sound Machine and KC and the Sunshine Band.

Pelham: I should have focused more on the business of music

Interestingly, the production genius said he wished he had put as much focus on the business side of the music as he did on the technical production during their most successful years.

“When I look back at the time I wish I had contractual business because all musicians think about is music chords sweet note and somebody else make the money.

“We were playing Madison Square Garden every Mother’s Day from 1980 to 1994, all the carnivals: Labor Day (New York), Caribana (Toronto), Notting Hill (London), Montreal and we started Byron Lee carnival in Jamaica also recording for BBC London and going on TV in London.

“My sad part is arranging and producing the music for the movie Dark Shadows and was paid only US$400 and the manager will tell me if it came out good they will use it,” he revealed.

Despite not having the foresight to maximise their earnings, Rudder said there are a number of career defining moments to look back on fondly during the period.

“One poignant moment that has always stuck with me, I was doing a show and I challenged members of the audience to come forward and do a verse and if they were good they would get a copy of my new album.

“Up came this little girl and made some odd noises to ‘Bahia Girl’ and the audience were in stitches. I stopped them and asked them to give her some love. It was after the show that her mom brought her to meet me. It turned out that she was deaf, but in her own way she knew the song inside out. She lived for ‘Bahia Girl’. Luckily I had an extra album and I was able to at least give it to her. We live and learn,” Rudder said with a smile.

Bring back melodies and harmonies to the music

While both music greats accept that the only constant in music and life is change, they called for greater thought to go into the production of soca and calypso music.

Goddard said while modern producers are proficient at rhythmic cadences and voice arrangement their productions often lack orchestration. He advises that more emphasis should be placed on the one, two, three of production fundamentals: rhythm, melody and harmony.

“We know everything must change. Music been doing that and that is why we went in to soca. But there are three elements in music, number one rhythm, number two melody and number three harmony.

“The music today only have rhythm and voice. I welcome the technology, I was the synthesiser player in all those calypso and soca, I could say the first but people will challenge. Now I love the technology, but let’s get some more orchestration: a little guitar, solo keyboard and solo sax instead of vocals all the way. That is only one colour,” Goddard said.

Rudder, meanwhile, says when he looks around today he hardly sees any real bands. He said at the ripe age of 66 he is still learning about music and challenged every musician to adopt a similar approach to their craft.

“I think that for 20-odd years that I stepped through the fires of learning before life exploded beautifully, and I’m still learning. I won’t change much in my career. Even the pain, according to John Lewis, was good pain.

“There are hardly any bands today. I guess that’s why that era is golden. The studios were alive with bands then. I’m lucky,” he concluded with another of his trademark smiles.

The heel of the boot

OFF Galeota, the south-east tip of Trinidad, the heel of the boot, there is a rock that stan…

More than a festival of literature

From the now standard Extempo Debate explo­ring the “Big Idea” of the day to dramatised readings of the classics, and to the staple Stand & Deliver open mic, festival attendees online can once again take delight in some of their favourite festival treats.

Almost everything—from shopping online, going through a toll booth, or submitting a report—c…

AS Covid-19 continues its devastating world tour, it can be easy to forget that there are other medical conditions that demand our attention. Today, the Express will focus on men’s health.