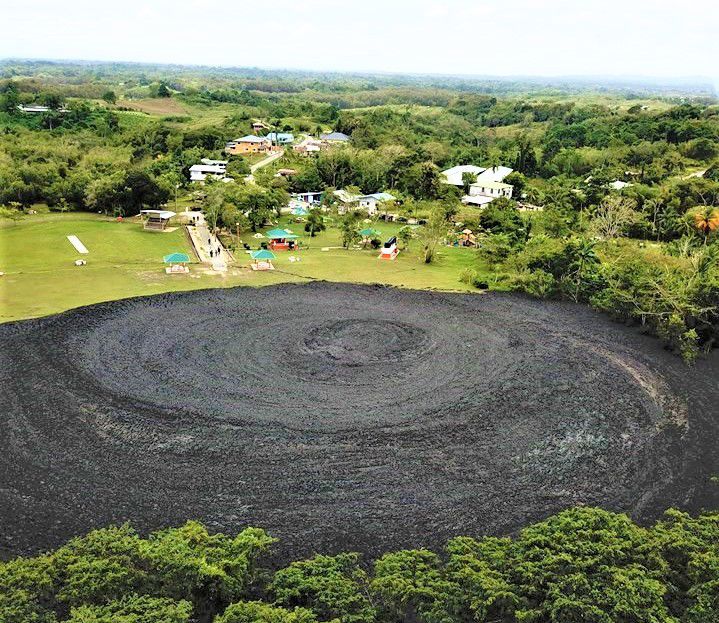 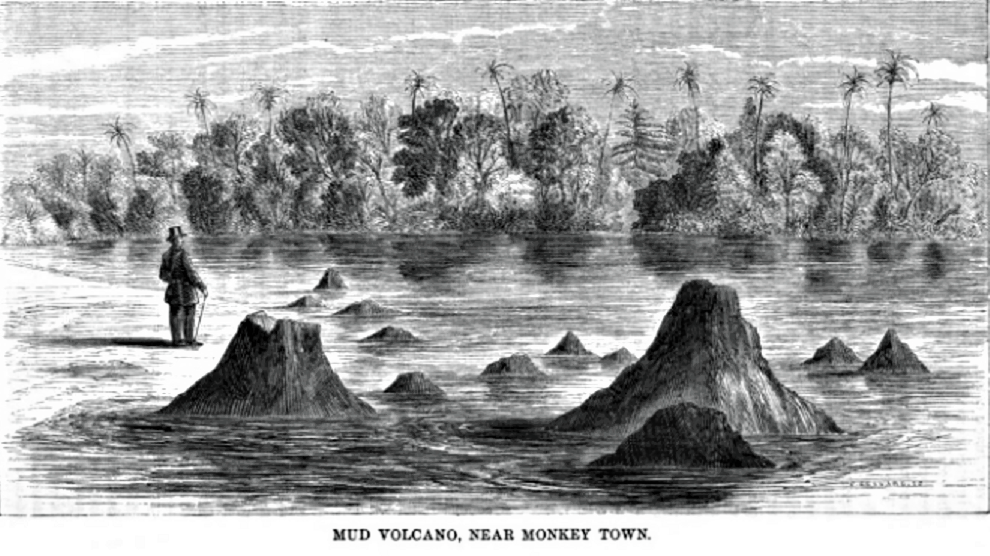 A panoramic shot of the Devil's Woodyard Mud Volcano site 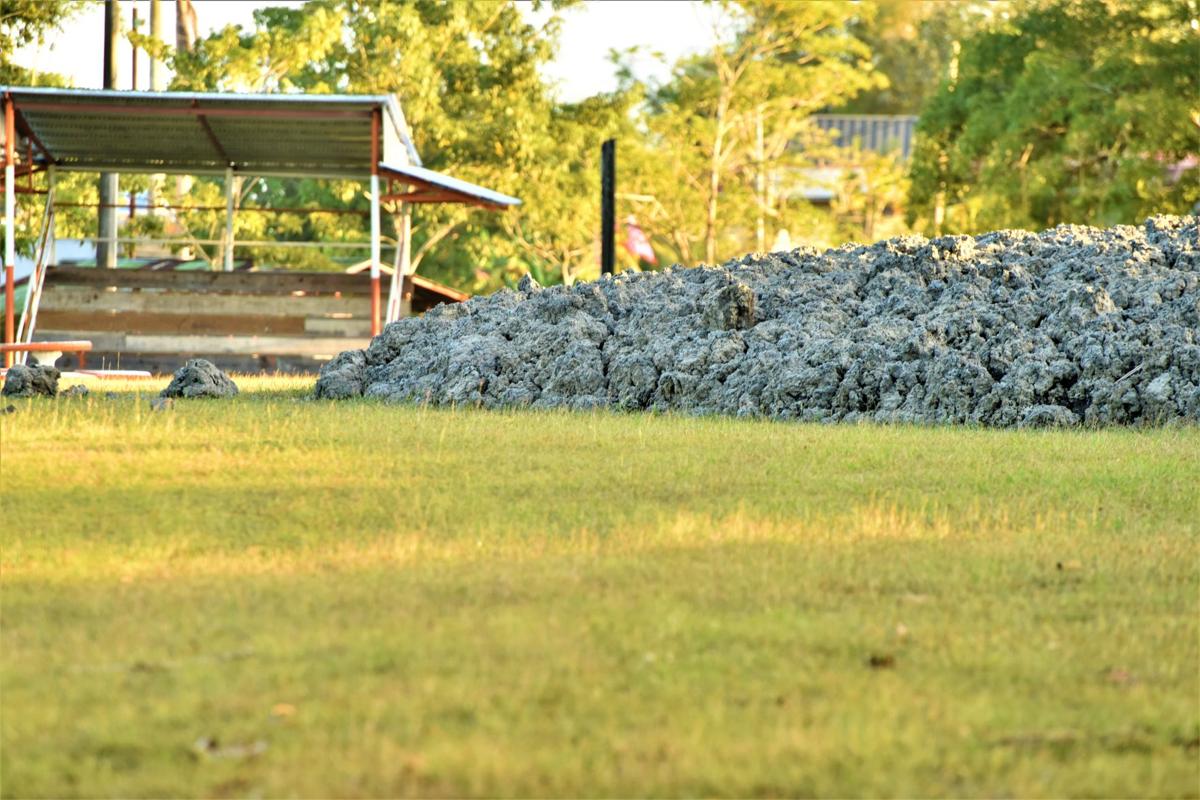 This is as far as the mud flow reached...this time. Photo: Richard Charan

IF you’re from south Trinidad, then you probably visited the Devil’s Woodyard.

And if you visited before this year’s Carnival Tuesday eruption, you likely left disappointed.

Having traveled some bad roads after getting some bad directions, the tourist is rewarded with a view of a piece of barren flatland with blackened branches sticking out of some burping muddy holes. And ants. Lot of ants.

Visitor’s remorse is forgivable since the site, long known to the Amerindians, has been alternately scaring and underwhelming the Colonists since 1852.

That’s when the British first recorded an eruption of a great amount of mud, bits of wood, and some odorous gases, which likely led to the site’s satanic naming.

Back then, much of the area was still covered in high woods being cleared by the enslaved and later, the indentured, toiling for estate owners planting vast fields of sugar and cocoa that would blanket the Naparimas for more than a hundred years.

But even then, the mud volcano, found on the former Hindustan Estate, near Monkey Town, east of Princes Town, was considered important enough to be investigated and illustrated, in the 1850s, by a team hired by the Britain’s Secretary of the Colonies to assess the economic geology of Trinidad.

At the time, there were only four known such “salses” on the island – the Devils Wood yard, one at Poole, at Lagon Bouff on Trinidad’s east coast and in Cedros.

The best known mud volcano in Piparo, which got the name “Devil’s Pot”, was not yet encountered.

That first eruption was recorded thusly: “Violent explosions were heard for some miles, at six o’clock in the evening, and on visiting the spot the following morning surface was found broken up and completely altered. Some of the adjacent trees had disappeared and others were thrown down”.

The site would be discussed in scientific papers over in the UK and appeared to have encouraged some early tourism, including a visit from Englishman Charles Kingsley who would raved about his visit in 1879 in the book At Last, A Christmas in the West Indies:

“ He ( a guide) led us well, up and down, and at last over a flat of rich muddy ground, full of huge trees, and of their roots likewise, where there was no path at all. The solitude was awful; so was the darkness of the shade; so was the stifling heat; and right glad we were when we saw an opening in the trees, and the little man quickened his pace, and stopped with an air of triumph not unmixed with awe on the edge of a circular pool of mud and water some two or three acres in extent.

‘Dere de debbil’s woodyard,’ said he, with somewhat bated breath. And no wonder; for a more doleful, uncanny, half-made spot I never saw. The sad forest ringed it round with a green wall, feathered down to the ugly mud, on which, partly perhaps from its saltness, partly from the changeableness of the surface, no plant would grow, save a few herbs and creepers which love the brackish water…There was no track of man, not even a hunter’s footprint; but instead, tracks of beasts in plenty. Deer, quenco, and lapo, with smaller animals, had been treading up and down, probably attracted by the salt water. They were safe enough, the old man said. No hunter dare approach the spot. There were ‘too much jumbies’ here…So we walked out upon the mud, which was mostly hard enough, past shallow pools of brackish water, smelling of asphalt, toward a group of little mud-volcanoes on the farther side. These curious openings into the nether-world are not permanent. They choke up after a while, and fresh ones appear in another part of the area, thus keeping the whole clear of plants".

Kingsley’s account convinced the future King of England to check it out some years later.

During a visit to Trinidad in 1880 by then Prince George and Prince Albert, they would make the difficult journey inland (on the way they gave Mission of Savanna its new name – Princes Town) to see the place.

The visit would be recorded :”The road for the first half of the distance is in very fair condition, but on turning off we got upon the muddiest road we ever saw, in parts of which our ponies plunged right up to their girths and in other west sliding down the sides of the hill…At length we arrived where there was a space of about two or three acres of clearance in the wood, of brown yellow against the forest greenness that rings it round, and there the hillocks of finest grey mud were, each being four and six feet high and reeking with the smell of sulphureted hydrogen…Alone it must be an uncanny sort of place to visit, “too much jumbies here. The Debbil he come out here and walk about” said the negro guide”.

There would be other hellish reports of the place over the years, none more interesting that the account of a Scotsman who visited the Devil’s Woodyard shortly after the eruption for 1888, and encountered the first brave/foolhardy person to stake a claim to some and settle on the end of the volcano.

“At four o’clock one dark still morning in February, a planter in the neighbourhood, who was setting his neighbours to work, was startled by the sounds of a strange, hoarse rumbling in the woods, like the rolling of an express train at full speed over a quarter of a mile of rail.

At daybreak a small exploring party set out for the scene of the explosion, cautiously peering and listening, and half expecting renewed rumblings that fortunately never came.

It was now necessary to turn off the beaten track to look for the volcano, for its charmed circle of death and havoc had widened to a diameter of at least one hundred and twenty yards. A few seconds of violent upheaval had raised its surface twelve feet above the surrounding forest, uprooting smaller trees that were still standing at all conceivable angles and enveloping the spurs of the larger leafy monarchs that alone stood upright in the track of the invading flood. Wishing to get a bird’s eye view of the scene, I climbed a tree from which the appearance of the volcano was that of an over-boiled pudding that had collapsed without breaking up.

Sixty yards from the circumference of the woodyard there were several wide, deep chasms in the earth, and only a few feet from one of these was a crooked hut. The owner was an East Indian who had been tempted by the richness of the soil to buy a piece of land in that strange place, from the Crown. The poor fellow had had a bad time of it. Suddenly awakened by a severe earthquake, and deafened by the roar of the explosion, he could not tell which way to run in the darkness and waited for the morning light with feelings that can be more easily imagined that described.

When I saw him, he had somewhat recovered his composure, and, pointing to a spot where the overflow had swallowed up his garden of maize. He said ‘Queen must gi’e um more garden, massa, debbil no mindum picket (that is, has no regard for boundary marks)."

Others would settle near the volcano over the next 100 years. There are now at least 30 houses within sight of the Devil’s Woodyard which was closed to the public after the February 13 eruption.

The site reopened on the Easter weekend. You must pay $5 to see the mud.

- Richard Charan is a writer and Multimedia Editor with CCN. You can contact him at richcharan@gmail.com

If yuh like bacchanal and lacouray, yuh will love the Kaiso Showkase calypso tent.

How do blisters occur?

Blisters happen from time to time. Whether they form on the hands from hard work; on the feet from shoes; or just going barefoot, they’re an aggravation. Potentially, they are a gateway to more serious conditions, if left untreated. Here’s how foot blisters happen, and can be prevented.

“NOTHING seems to make sense anymore,” David Rudder sings on repeat in “State of the Nation”—his pore-raising commentary about where our society is heading. David Bishop and MX Prime (Edghill Thomas) added their vocals to the track in which Rudder addresses crime and corruption.

A love for lyrics

Maria Bhola is a brilliant calypsonian whose lyrics are imbued with narratives that tackle social issues and advocate for the downtrodden with equal parts empathy and rage. When she delves into hard issues, she is not willing to simply make noise; in fact, according to Bhola, “When I sing, it must be that I have something to say.”