RESTING SPOT: A pelican rests, during a break from its fishing expedition. 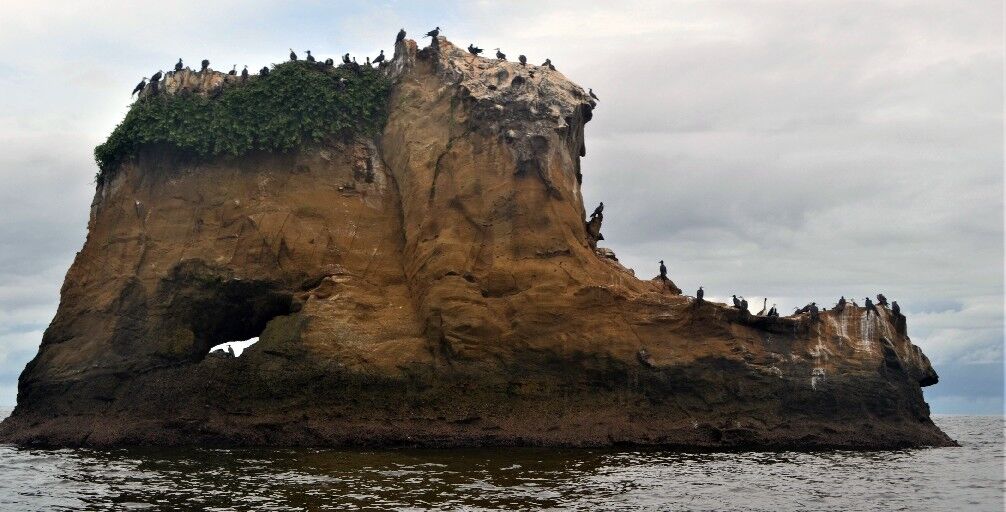 RESTING SPOT: A pelican rests, during a break from its fishing expedition.

OFF Galeota, the south-east tip of Trinidad, the heel of the boot, there is a rock that stands just to the lee of the point called Boots Stone.

According to Guayaguayare elder Phillip Cummings, the stone was originally called The Horseshoe because of its curved upward shape at both ends. This was seen as the reason why fishermen had such good luck when they went fishing around the stone. They caught pargue, grunt, and much more in large numbers.

When the “good luck” parts of the stone eventually broke off, it took the shape of a boot. Fishermen then started to call it Boots Stone, a popular landmark to them.

Boots Stone is a haven for pelicans and smaller seabirds, all sharing every available space they could find. This is a very busy platform during the day as the birds fly on and off amid attempts at catching a share of the numerous fish in the waters at the base.

Commercial activities of the nearby petroleum port do not seem to affect the natural routines of wildlife here, but the actions of the ocean are always unpredictable. Sections of the stone warn of imminent collapse from the heavy battering of the seas. However, for the moment, during this spell of calm, all is well.

Where Point Galeota heels into the merging waters of the Atlantic and the Columbus Channel, there is an elongated flat-topped stone called The Table. This is the prominent “blunt” end of the heel that acts as a stone bar, helping to protect the point from the destruction of heavy Atlantic surges.

It is a marvel to witness the wind-swept capping tides approaching the point just outside in the Atlantic to the east. On ‘grey’ days, you become aware of the fast-changing moods of the ocean in colour and movement.

During one of my previous trips to this spectacular scenic vantage point, just before descent of the cliffside, the sea was a beautiful sight below, almost as calm as a lake, just a few ripples in response to a light breeze. During the little time I spent climbing down the cliff to The Table, everything changed. There was the threat of a thunderstorm, the sea had changed from a beautiful blue to a tumultuous grey, waves foamed at the crests and breakers just smashed into the point in response to the strong winds that had sprung up.

Personally, I was glad that I had had the opportunity to experience a side of nature that must be one of the norms at this end of the boot.

Also, from the clifftop, it was a memorable sight to pinpoint the approaching brown overflow of South America’s Orinoco River, a prominent dividing line travelling between the oncoming brown and the accepting blue. It was not too long before the line washed past, leaving a sea of brown in its wake where the blue was.

The Table is a popular spot for line fishing. Access is via a steep descent down the cliffside of the point. Like those in pirogues, fishermen catch cavalli, barracuda, and grand ecaille.

Again, commercial activities nearby have little impact on the ambiance of this site and linesmen operate in harmony with the fishing expeditions of the resident seabirds, both enjoying their share of the ample bounty of this south-east sanctuary.

SINCE beekeeper Aditya Ramlochan began bee removals in 2001, he estimates he has removed abo…