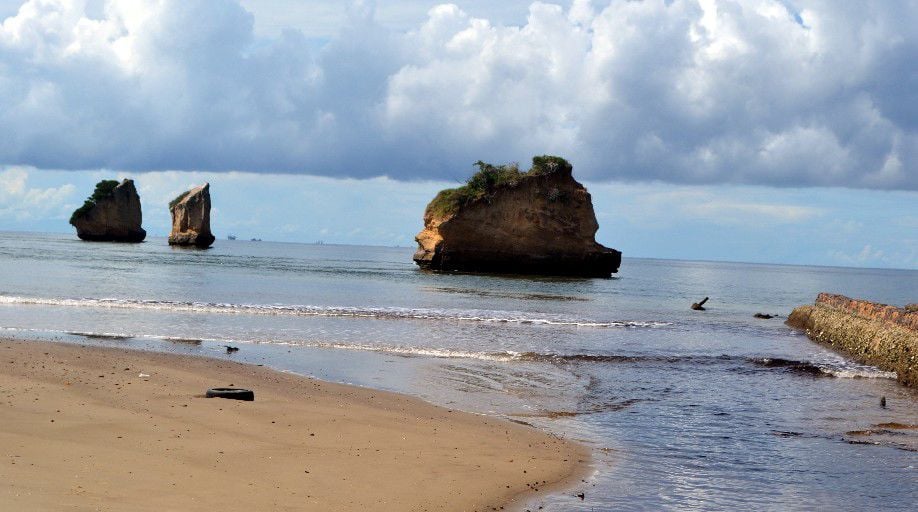 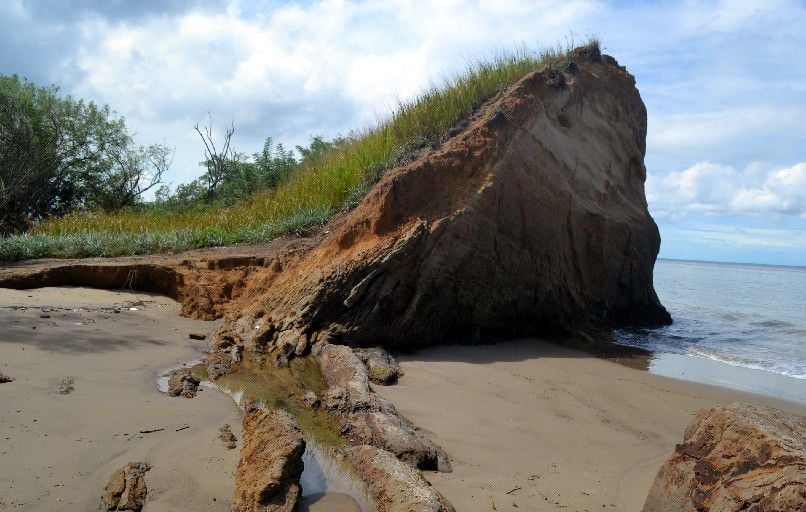 Fallen arch is last link to headland as new Sister Rock is born.

Fallen arch is last link to headland as new Sister Rock is born.

ON the last occasion when we went along the south-western coast out to Los Gallos rocks in a pirogue, we saw where the little brother of the three sisters was causing quite a maelstrom in the area.

We have learned that many swimmers have tried to reach the first of the sisters but have always got into difficulties and at times it has been fatal because of the strong nature of the currents when you near the rocks and the fact that there is no accessible base around the stone upon which to climb.

This time we approached Los Gallos from landwards along Columbus Beach and had the company of a true elder of Cedros in the person of Edward Marcelle as our guide. There was no signage identifying sites along the way so we asked the question how is it that so popular a place could be without indicators to the lush mangrove, the waterway, and the presence of water birds especially the scarlet ibis we saw perched on a branch overhanging the waterway?

This prompted our learned friend to share his long-standing suggestions and recommendations for the enhancement of the Columbus Bay area with us.

“The small waterway that visitors pass en route to the beach can be cleared up to about 200 feet and used for kayaking. The waterway can be flushed out with freshly pumped sea water to complement the mangrove lagoon at the mouth.

“To be in harmony with the terrain and to facilitate access across the area, an access boardwalk or brick walk can be constructed as part of the design to create as magnificent a beach facility such that places the likes of Vessigny have. All this can be done at the same time considering prevention of the erosion inherent to the area.”

We did see the potential for our guide’s vision in the magnificent natural layout of this area.

At low tide there is a significant amount of beach beautifully patterned with tide pools that shimmer in the bright sunlight. In decades past this must have been a spectacular spot when there was more sand this side of the line of rocks.

Our approach to the stacks entailed crossing a floodgate that passages the inland water out to sea. Beyond this lies a critical area that is highly vulnerable to the tides just as the present remnants of the headland must have been in times past before they became stacks.

We now encountered a gap some 60 to 70 feet where a geophysical marvel once stood.

According to our guide, this immediate site started with a small hole in the headland that gradually enlarged until the water finally eroded right through and left a connecting bridge or arch at the top. Eventually because of the continuing erosion of the headland, the arch collapsed, leaving this large gap through which the waves rush through from the north.

The threat here now is that the high-tide surge through this gap is beginning to erode the floodgate, as can already be seen in some parts.

There is also now the novelty to this northern end of Columbus Bay in the addition of another sister who is slowly separating from the headland, the fallen arch the only terrain still maintaining a link at base level.

In time the navel string will be cut and this new-born sister will be fully on her own.

We located a steep path up to her crest but found that the seaward side plunges so bare and steep to the water that it is not so safe a place to linger.

Our guide drew our attention to the iron ore deposits embedded in the sandstone and suggested that these may be saving the headland from being eroded at a faster rate.

The ultimate threat, however, is the full exposure of Columbus Bay when this headland that acts as protector is eroded away, collapsing into a new series of stacks that create passages through which the sea rushes. There will then be no more Columbus Bay.

Back at the base we walked to the seaward edge of the soon-to-be-born sister where her other siblings and almost drowning little brother could be seen in a straight line pointing directly to Soldado Rock out to sea. At least we had this present opportunity because given the present rate of erosion along this coastline it is possible that we may have to swim to access this spot in the near future.