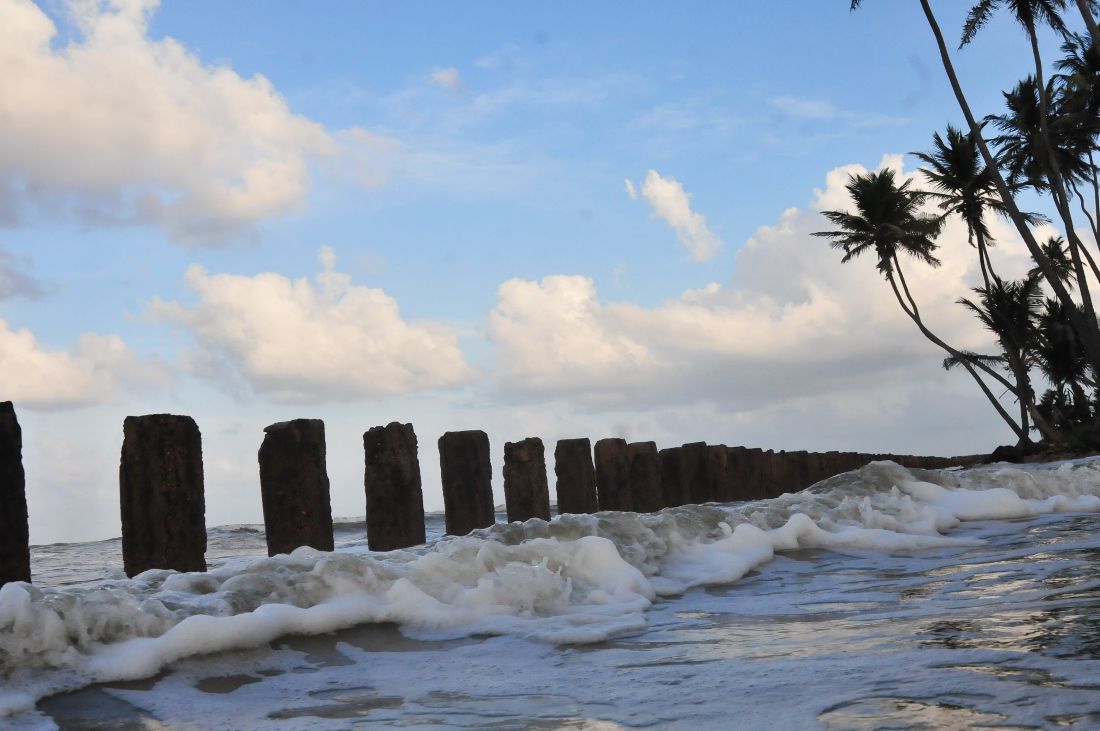 The breached seawall near the mouth of the Nariva River. 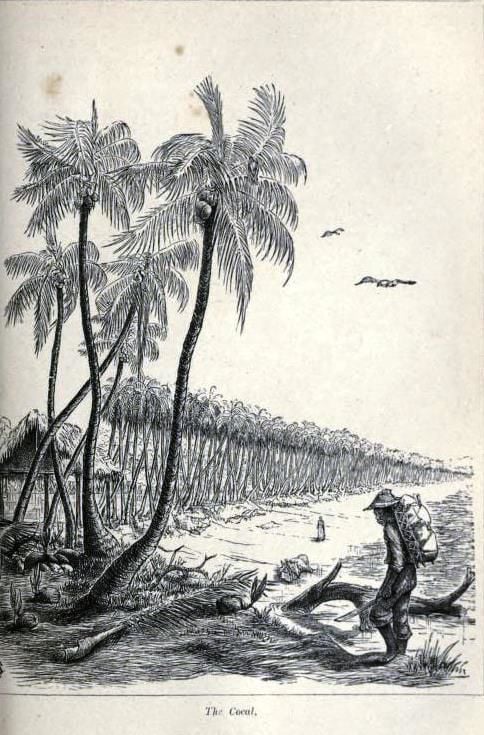 A sketch by Charles Kingsley of "The Cocal" 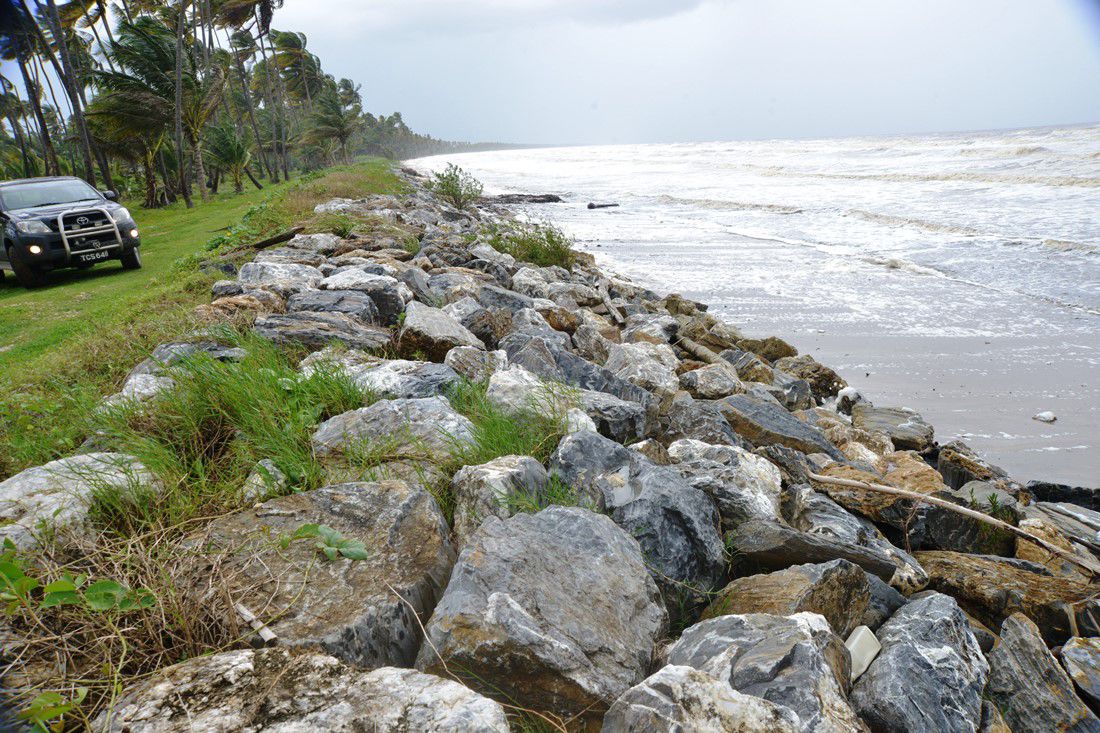 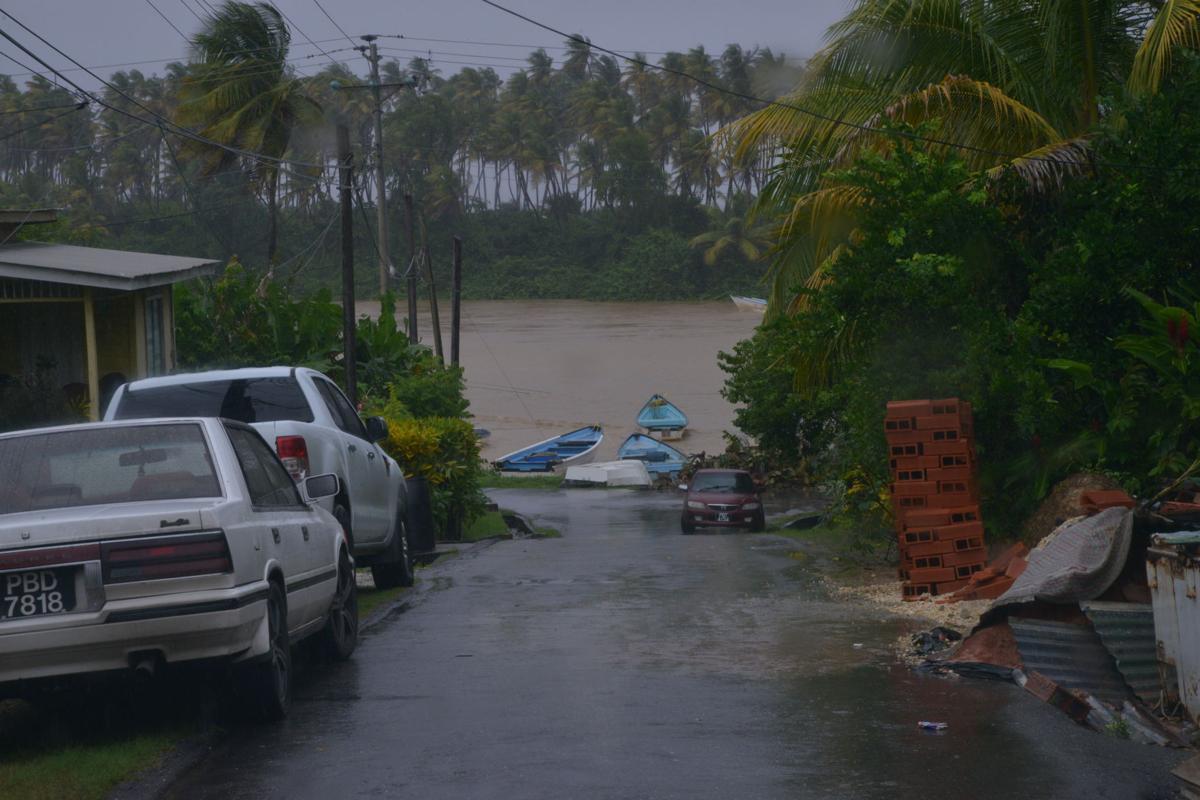 This road once led to the Ortoire River ferry 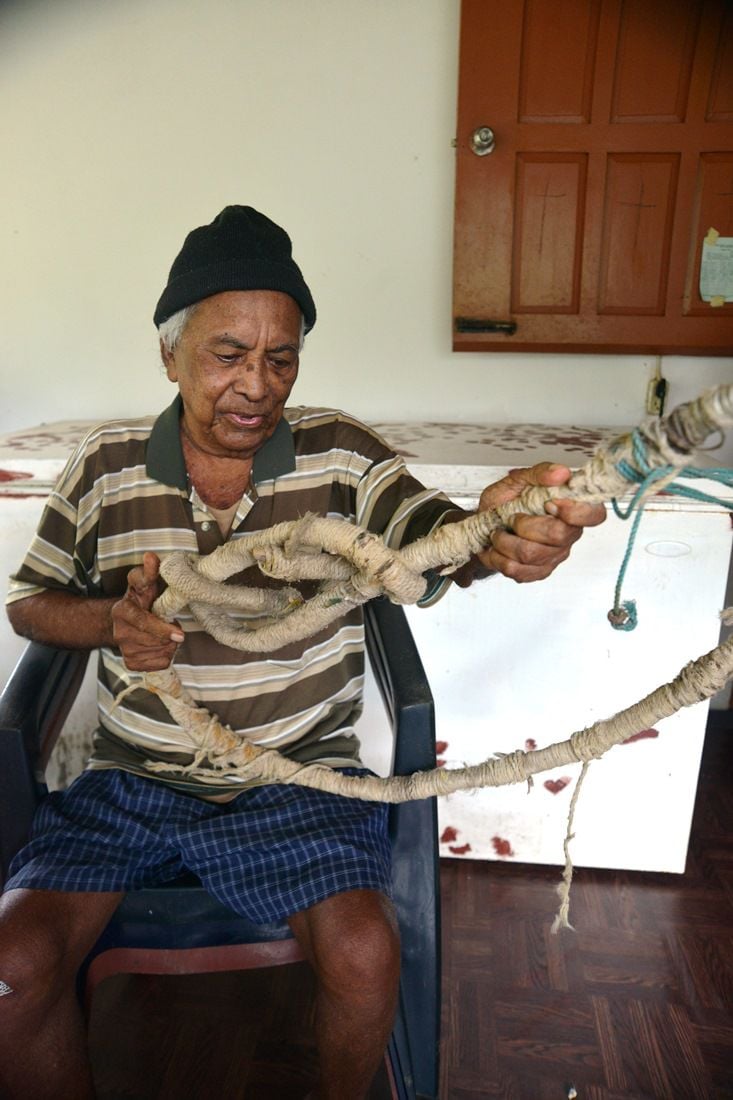 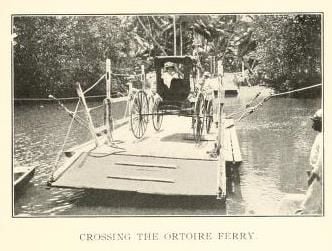 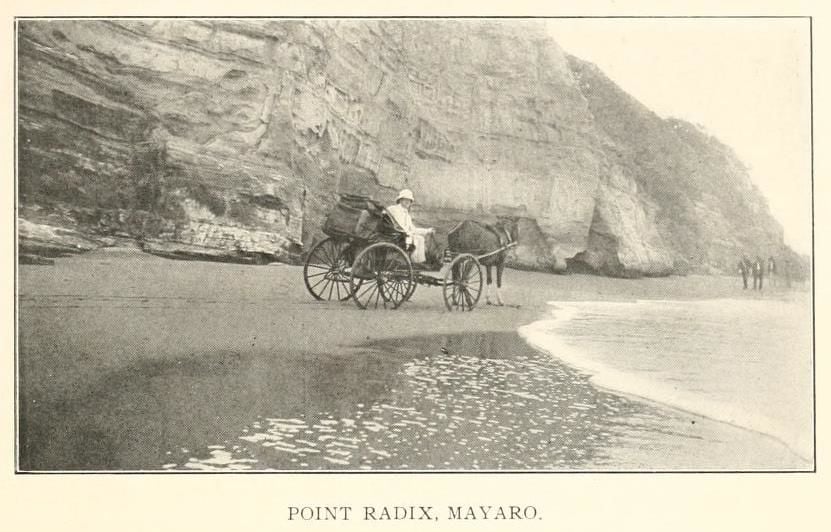 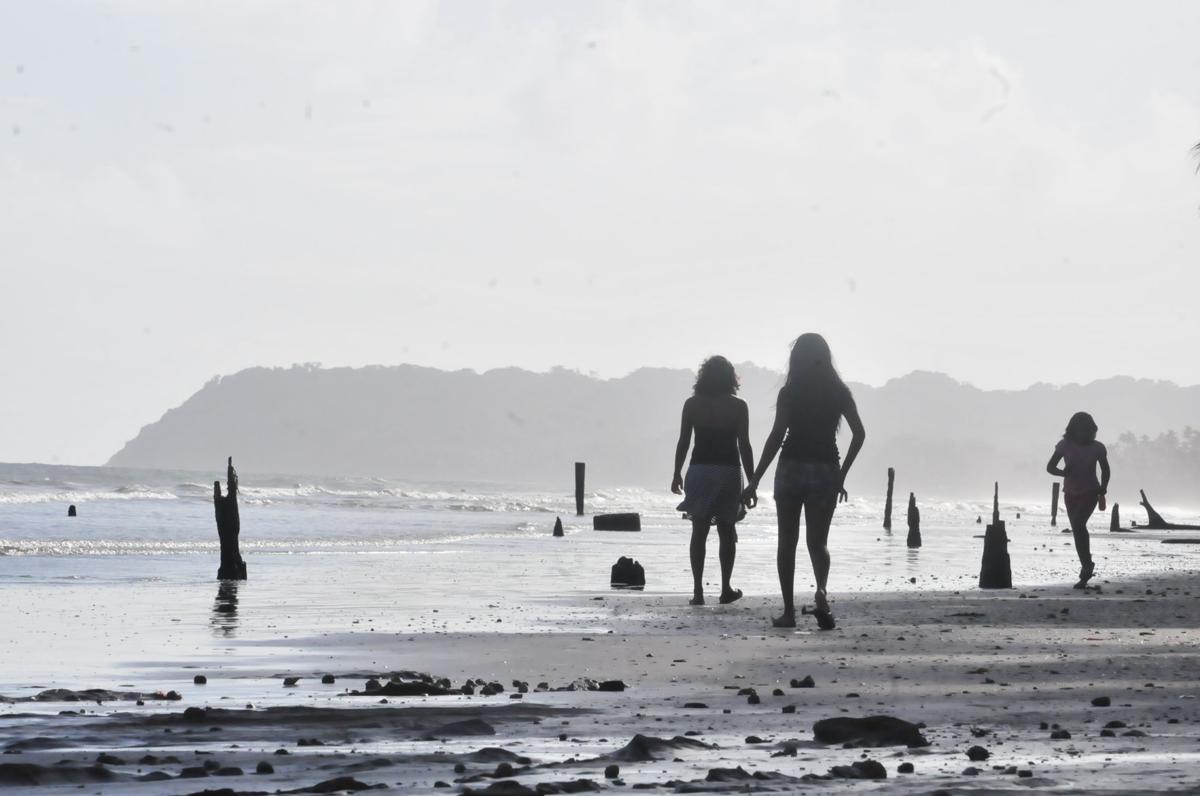 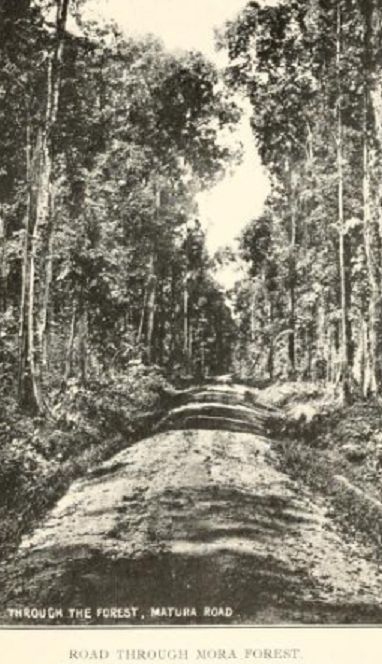 An image from Harry Vincent's book

The breached seawall near the mouth of the Nariva River.

This road once led to the Ortoire River ferry

An image from Harry Vincent's book

THERE was once this man, about a hundred years ago, living at a research station on the Gasparee Isle, and studying fish.

One day he decided to take a trip over to Trinidad's east coast to see if he could get lucky and catch a tarpon, grouper or giant catfish.

Since cars were only invented a few years before and only the very rich had one, Harry Vincent and some friends used horses and buggy to cross the island, trotting through places since changed beyond recognition,

Vincent would later write about his adventures in a book, describing the Cocal - a plantation of coconut palms between Manzanilla Point and the Ortoire River, in ways present-day visitors would readily identify with – sun, sea, the booming sound of the surf, a seashore wide and billiard board smooth at the low tide, clean except for the driftwood coming from the Orinoco, a place where people can think big in a small, and sometimes small-minded island.

He described the work of the coconut estate, and of how the nuts were picked and husked to make rope, how the copra was dried to be taken to the shipping depot near the L'Ebranche River, for the weekly pick-up by RMS Kennet coastal steamer.

The steamer had to avoid the treacherous Carpenters rocks at Manzanilla Point, which, the historians record, gave birth to the Cocal when coconuts (not native to here) took root along the coast after floating ashore from an East Indies vessel headed to South America, but which struck the rocks and sank in the 1700s.

So detailed was Vincent's account, that he even wrote down what he ate that day, a menu that holds the clue to why there are so few of those manatees surviving precariously in the Nariva River.

After commenting on the fine leather made from one of the harpooned 600-pound creatures, he said he sat down for a delightful dinner of Mayaro oysters, chip chip soup, forcemeat balls of minced paludes, roast lappe, cirique sauce in white wine, boiled grouper, ailerondes stewed, Seville orange sauce, blue rock crab, Mayaro soles, iced coconut cream with seaside grape jelly, and some potted manatee brains on toast, washed down with some contraband Dewar's whisky, and vatted rum.

Vincent wasn't the first to fawn over this special part of Trinidad. It was described by English novelist Charles Kingsley as he approached on horseback from the north in 1869, who wrote: All this while the dull thunder of the surf was growing louder and louder; till, not as in England over a bare down, but through the thickest foliage down to the high-tide mark, we rode out upon the high-tide mark, we rode out upon the shore, and saw before us a right noble sight; a fiat, sandy, surf-beaten shore, along which stretched, in one grand curve, lost in a haze of spray, 14 miles of Coco palms. This was the Cocal; and it was worth coming all the way from England to see it alone. I at once felt the truth of my host's saying, that if I went to the Cocal I should find myself transported suddenly from the West Indies to the East. Just such must be the shore of a Coral Island in the Pacific.

This description, too, would receive the endorsement of locals who come to this beach, also with their rum, and sometimes their worries, to bathe, cook, fish, and sometimes drown. Others know it as the place to hold undisturbed Hindu pujas and Spiritual Baptist rituals.

Kingley's reconnoitre of the Cocal also took him to the very wetland that reminds every so often that man cannot always conquer nature, when the water from the Nariva Swamp creates new channels across the road to get to the sea.

He wrote: Inside the Cocal, two hundred yards to the westward, stretches inland a labyrinth of lagoons and mangrove swamps, impassable to most creatures save alligators and boa constrictors. But amid this labyrinth grow everywhere mighty trees, balata in plenty among them, in every stage of decay; dying seemingly, by gradual submergence of their roots.

Kingsley also wrote about the plantation house in which he stayed, describing: A large and comfortable house, only just rebuilt after a fire, stood among the palm trees, between the sea and the lagoon; and behind it the barns, sheds engine-houses of the coco-works; and inside it a hearty welcome from a most agreeable German gentleman and his German engineer.

Both writers recorded their travel south towards Mayaro (the amber hue of the palms, sea beans, the Negro workers), of using the seashore as their highway, and of crossing the Nariva and Ortoire rivers by ferry.

What remains of this description? Quite a lot. And it's still one of the most satisfying places you can visit in Trinidad.

That plantation house has been replaced by a newer structure but you can still see some of the original support buildings and abandoned barrack houses, now the property of the Manatee Conservation Trust, which acquired 500 acres of the Cocal in 1997 from Huggins Trust Ltd, which had owned the operations for a good 100 years.

But the Cocal's history is at least twice as old, extending all the way back to Spain's 1783 Cedula of Population which allowed French planters and their slaves to emigrate to the island with their slaves (the British would conquer Trinidad 14 years later) Mayaro-born historian/writer Michael Anthony knows quite a lot about this, and about the history of that road ruined by the floods.

According to Anthony's research, the Cocal is a Spanish word for an abundance of coconut trees.

Some of those trees were already in existence, Anthony knows, since the map of Trinidad drawn by Captain Frederick Mallet, who was part of Sir Ralph Abercromby's invasion force in 1797, shows the coconut trees drawn on that coast.

The Bovells are known to have leased the Cocal as an estate, from about 1880, worked it for a long period, with that strip of road (which then amounted to no more than a sandy track) used by workers to access the plantation and move produce.

Anthony said: “When the first (private) buses ran from Sangre Grande to Mayaro at the end of the 1920s, they were forbidden to drive through the Cocal and had to await low tide. In fact no vehicles were allowed through”.

Vehicles would travel along the shore to the Nariva and Ortoire rivers, where ferries took them across (quite a few tumbled off, residents remembered), which allowed them on to Mayaro.

Anthony said, in the 30s, that strip of road now used was strengthened and opened for public use. The Cocal, which improved from gravel to macadam, was paved around 1942.

Anthony, who remembered making the ferry crossing once, said the first bridge to be built across the Ortoire near the coast was in 1951.

Just where the ferry once landed at Ortoire lives Eugene Metoo, 79. He remembers all of it. Grenadian-born, schooled in the fields of a cocoa planation, Metoo remembers that flood of 1971, of working the Cocal climbing those coconut trees in the 50s, picking 1,000 nuts for $2 a day, doing it the old-fashioned way (a tool called a bicycle which he still has) before a back injury, and a downturn in the industry sent him to the sea as a fisherman.

He has lived all but the first years of his life among those coconut trees and in that swamp. And he wouldn't want any other life.

NOTE: Richard Charan is a writer and Multimedia Editor at CCN. He can he reached at richcharan@gmail.com

The total shutdown of all restaurants for the duration of this month has left the entire hospitality industry in a huge hodgepodge of uncertainty.

AS COVID-19 continues to impact people and countries around the world, teams have begun work…

WEEKS ago, terms like “social distancing” and “self-isolation” were alien concepts, today they have become part of our reality. But that comes at a cost. While social distancing and self-isolation can help stem the tide of COVID-19, they will also have a significant effect on the general mental health of the entire population, said counselling psychologist Jean-Luc Borel.