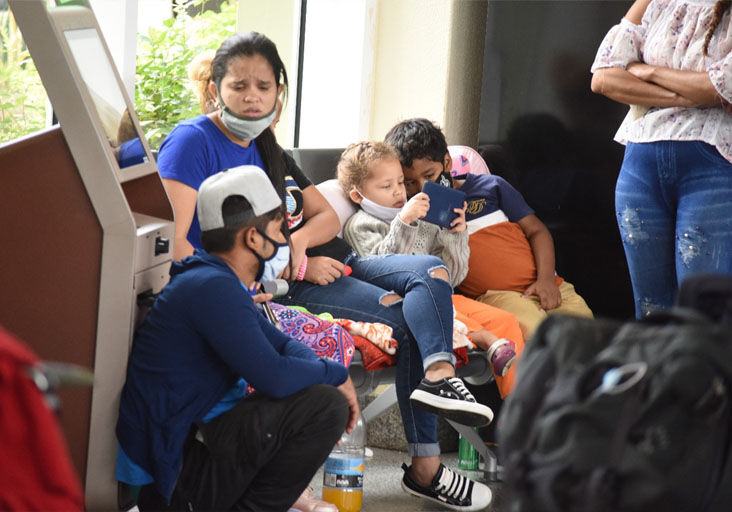 waiting on word: A Venezuelan family awaits instructions in the waiting area at Piarco International Airport yesterday before their repatriation flight. 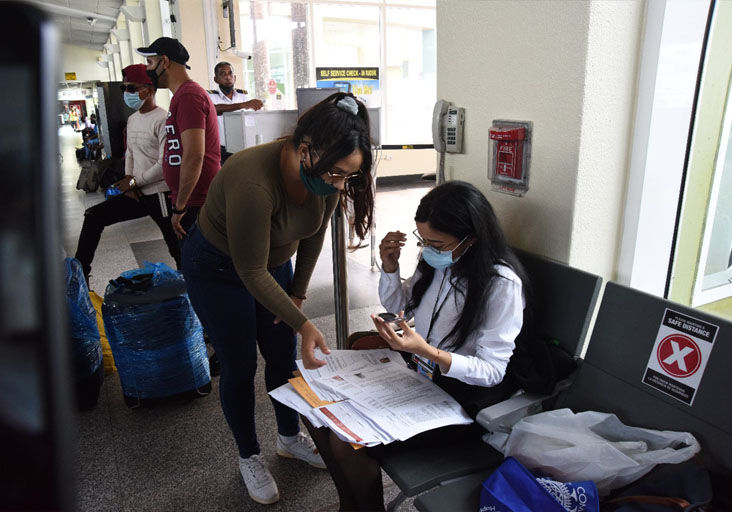 embassy help: An official from the Venezuelan Embassy, at right, assists a Venezuelan national in the waiting

waiting on word: A Venezuelan family awaits instructions in the waiting area at Piarco International Airport yesterday before their repatriation flight.

embassy help: An official from the Venezuelan Embassy, at right, assists a Venezuelan national in the waiting

Four women from the Ministry of National Security comforted a Venezuelan baby for hours yesterday at Piarco International Airport.

The baby girl was among 97 people gran­ted permission to be re­patriated to Caracas, Ven­ezuela, on a VO 9713 flight at 7.30 p.m. yesterday.

However, many migrants told the Express the process to get home was not an easy one.

After their flight was unexpectedly cancelled on Thursday, 23 people in the group, including three children, were forced to sleep on the cold floor at the airport since they had nowhere to stay.

They said they had already sold all of their belongings and were not extended any lenien­cy from Trinidad and To­bago nationals who had previously provided them with shelter.

The others returned yesterday morning unaware whether or not National Security Minister Stuart Young had rectified the issue involving use of the Venezuela-owned Conviasa aircraft—scheduled to transport them back home—which had previously been sanctioned by the United States.

The Ministry of National Security indicated then that it was reaching out to the US Embassy in Port of Spain to seek guidance on the aircraft, and will work with the Ministry of Foreign and Caricom Affairs.

Men, women, children and the elderly filled the departure section of the airport yesterday, showing up in groups from as early as 8 a.m. They waited hours without any confirmation.

Some of them were also disabled and few spoke English.

Many were perplexed and exhausted, and others were seen being comforted by their loved ones via video call on their mobile phones.

Eventually, at 2 p.m., officials from the Embassy of the Bolivarian Republic of Venezuela in T&T showed up and began issuing the nationals their Covid-19 PCR (polymerase chain reaction)test results.

They all tested negative for the virus.

They were then given a provisional travel document and allowed to stand in line to check in their luggage and receive a boarding pass.

However, they still did not know the exact time of departure until around 4.30 p.m.

Speaking to the Express, one elderly man who did not want to be named said: “Finally! After an entire year of waiting, I get to go home! We just came to attend a family gather­ing in Tobago for ten days in March last year. We’ve been stuck here since. Every attempt to get back home has been blocked by one thing or the other.”

He was accompanied by two other elderly peo­ple.

Several other Venez­uelans also told the Express that some of the young women anxious to return home were victims of human trafficking and domestic abuse, and the children had parents who were deported.

They were especially happy to go home as well.

When the Express spoke with wo­men from the Ministry of National Security who were standing in line holding Venezuelan children by hand, one of the women said: “No, I’m not travelling, just protecting the children.”

On Thursday eve­ning, the Ministry of National Security issued a media release saying, “Within the past week, the Venezuelan government made a request of the Government of Trinidad and Tobago to facilitate their provision of a repatriation flight from Trinidad to Venezuela.

“This request was made via the normal di­plomatic channels to the Ministry of Foreign and Caricom Affairs. The Ministry of National Security granted preliminary approval for this repatriation exercise as it was seen as a humanitarian effort by the government of Venezuela. All arrangements were made by Venezuela.

“When the details were provided of the aircraft that the Venezuelan government was propo­sing to use to repatriate approximately 100 Venezuelan nationals, it was discovered that the aircraft was amongst those sanctioned by the Uni­ted States of America. Unfortunately, in those circumstances, the Ministry of National Security could not grant approval for the aircraft to come to Trinidad and Tobago.

“The Ministry of National Security has reached out to the Uni­ted States of America Embassy in Port of Spain to seek guidance and will work with the Ministry of Foreign and Caricom Affairs with respect to the possibility of a future repatriation exercise by the Venezuelan government.”