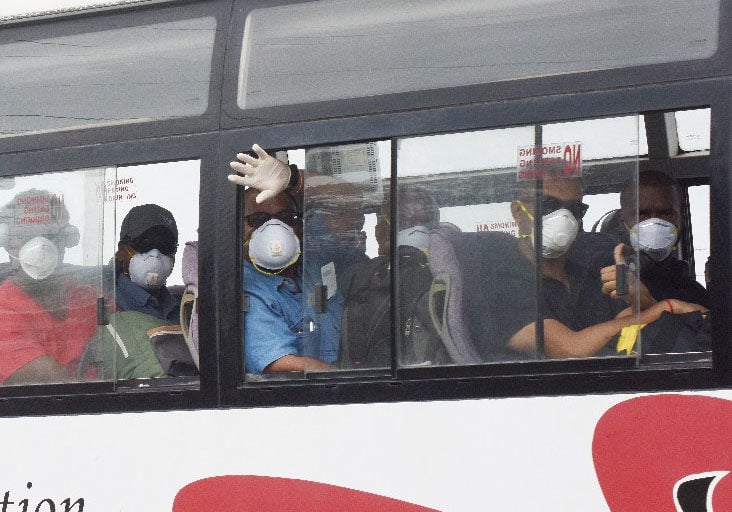 Leaving airport: Trinidad and Tobago nationals who were stranded in Suriname leave Piarco International Airport in a PTSC bus after their arrival yesterday. They were transported to The UWI’s Debe campus, where they will be quarantined for 14 days. —Photo: CURTIS CHASE 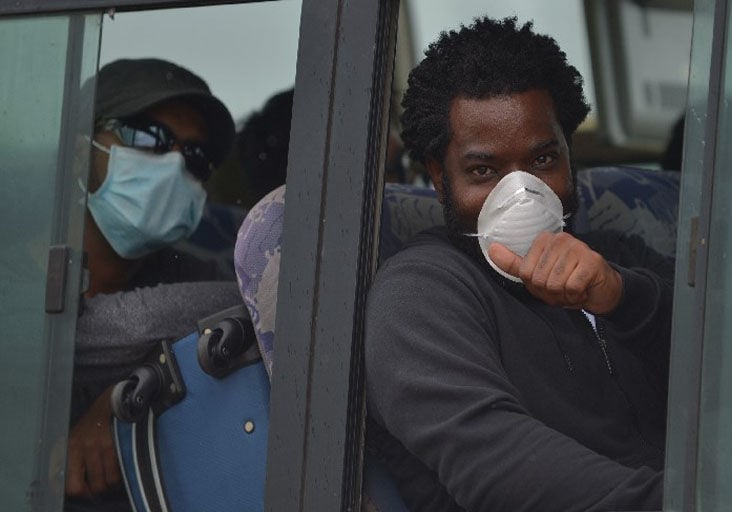 Ready for lockdown: A T&T national gives a thumbs up as the bus arrives at the Debe campus yesterday. —Photo: DEXTER PHILIP

Leaving airport: Trinidad and Tobago nationals who were stranded in Suriname leave Piarco International Airport in a PTSC bus after their arrival yesterday. They were transported to The UWI’s Debe campus, where they will be quarantined for 14 days. —Photo: CURTIS CHASE

Ready for lockdown: A T&T national gives a thumbs up as the bus arrives at the Debe campus yesterday. —Photo: DEXTER PHILIP

The sight of Trinidad’s landscape from the skies ignited smiles and relief for some 70 nationals who returned home yesterday after being stranded in Suriname for weeks.

They are all to be tested for the deadly COVID-19 virus today at The UWI Debe campus where they will be quarantined for 14 days.

Rishi Ramkissoon, co-ordinator of the group’s return, said yesterday the feeling of being back home was indescribable given the anxiety they faced while in Suriname.

“There was a real joy in coming in. I myself was looking out to just spot Trinidad and I see everyone was doing it as well. We were just very keen to touch down after all the uncertainty for weeks as to when we will get home and see our families,” he said.

“There was joy and relief. I never felt as happy to touch down in Trinidad as I did this time. Even in the Suriname airport this morning everyone looked like a weight was removed from their shoulders in finally being able to come home,” he added.

He said the group received permission to enter the country from National Security Minister Stuart Young after 8 p.m. on Thursday.

He said by 7.30 a.m. on Friday they were all at the airport in Suriname eager to return home.

Ramkissoon said when the group arrived at Piarco International Airport after 10 a.m. there were three PTSC buses and police waiting on the tarmac for them.

He said the bus drivers were equipped with full personal protection equipment (PPE) and the entourage took them directly to The UWI Debe campus where there was a smooth admission process.

“Everything at Debe was well organised,” he said. Eight people at a time were allowed to disembark and the rooms were already pre-assigned and ready,” he said.

Ramkissoon said the Defence Force collected their luggage and it was sanitised before they were allowed to take it to their rooms. He said a lunch of rice, peas and fish was ready for them.

“The rooms are comfortable. They have taken care to ensure it have things that are necessary — water, tea and coffee. I think they made a big effort to ensure everyone can manage for the 14 days. There is nothing to complain about based on the short time we have been here so far,” he said.

He expressed gratitude to the Health Ministry for the preparations made. Ramkissoon also extended special thanks to Suriname Airways and their agent, Jerome Khan, for stepping in and bringing them home.

This is the second group to return to Trinidad since this country’s borders were closed at midnight on March 22.

On April 21, a group of 33 nationals were allowed to return from Barbados and are currently quarantined.

TWO hundred and seventy-five workers attached to the Trent Restaurant Group will be furloughed for three months as the group’s operations are being suspended because of the non-viability of curbside and takeaway food service.

Amari John, the two-year-old boy diagnosed with a rare medical condition, has tested positive for the Covid-19 virus and is being treated at the Couva Hospital and Multi-Training Facility along with his mother.

PM: Focus on getting workers vaccinated

There have been no changes to the existing Covid-19 restrictions, as Prime Minister Dr Keith Rowley says the focus now is on getting the population to accept the Covid-19 vaccine and to have the country in a state that would allow children to resume face-to-face classes in September.

WHAT was supposed to have been a one-hour wait at a nursing home in San Fernando turned into an 81-year-old man being kept at the facility for several weeks before being transferred to another in Maraval.

Some spaces are of such significance that they should only be altered after the greatest care and consideration.