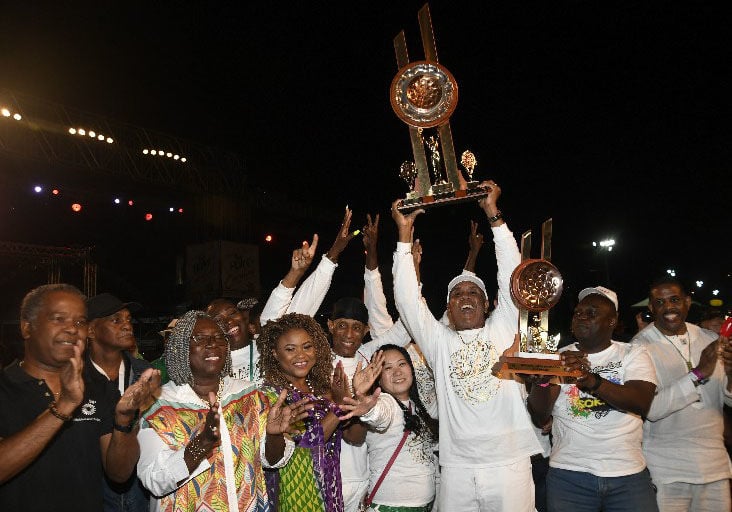 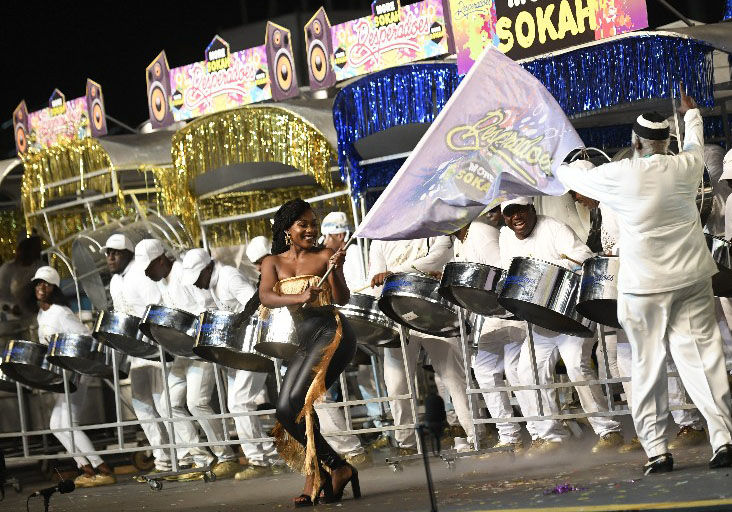 When Nailah joined them on stage, flag in hand, to spur them on to an almighty crescendo there was no denying their title march. Despers scored an unbeatable 286 points en route to winning their 12th title and now stands alone as the most decorated steel orchestra in the 57-year history of the National Panorama competition.

An emotional Carlton “Zanda” Alexander dedicated Despers’ impressive win to their home community of Laventille. Zanda said despite being forced to relocate to Tragarete Road amid security concerns in the embattled community, Despers remains very much a Laventille band.

“I must say thank God for giving us that (first) position. I feel good. This is for Laventille. I think the community of Laventille has missed the band being up there and having that constant connection with them. So this is to remind them we are still Laventille,” he said.

Zanda said key to their victory, even more so than the actual rudiments of playing the arrangement, was getting every player in the band to understand the concept of “More Sokah”.

“I think the work that was put in is more than music. It was talking to the members and showing them what is sokah. What is Nailah speaking about? The people of T&T want more sokah. I told dem yuh have to soak in de sokah,” Zanda laughed.

Zanda said he embodied the concept through his personal connection with Nailah’s grandfather, soca inventor Ras Shorty I (Garfield Blackman).

“There was always this connection between Shorty and I. When I heard this song I felt it. I heard and felt the soca consciousness.

“I would tell them (Despers pannist) the way I improvise is the language of soca. The way we talk. It was about getting each member to understand and buy into the vision and allowing them the space to let the song bring out what it wanted in them,” he explained.

the best we could

Despers’ victory not only ensured they won the race to a table-topping 12 Panorama titles, it also denied rival Port of Spain band BP Renegades arranger Duvone Stewart a career-defining hat-trick of wins.

The Renegades arranger pulled out all the stops in chase of a history-matching hat-trick, inclusive of theatrics and pyrotechnics, during a highly technical display laden with extended runs and musical innuendos.

It wasn’t meant to be for the back-to-back Panorama winner, however. Renegades legend Jit Samaroo (1995 to 1997)—and ace arranger Clive Bradley (from 1998 to 2000, winning the title first with Nutones and then twice in a row with Despers)—remain the only arrangers to achieve the feat.

A relaxed Stewart took the defeat all in stride, however, when he spoke to the Express yesterday.

“I’m good. I’m still alive. It (the hat-trick) would have been something nice to achieve, but we just have to start over and go again. Just like Anthony Joshua was a heavyweight boxing champ and he fell and got back up and got his crown again. We are still a champion band and I am still a champion arranger,” Stewart said.

The charismatic arranger said Renegades pannists left everything on the stage in an effort to bring home the hat-trick. He said Zanda and Despers, however, proved to be worthy competitors and therefore deserve full praise for their win.

“I think the lesson is not everything is a given. All that I ask for from the band I got it . We did the best we could have done at the point of the time and it was well executed. But, at the end of the day you had 11 great bands with 11 great arrangers and hundreds of excellent players displaying a high level of professionalism, talent and discipline at the Panorama finals.

“We must say congratulations to Carlton “Zanda” Alexander and Desperadoes on the high level of musicianship they showed last night (Saturday). Congrats to Zanda, congrats to Despers and to all 11 bands that competed last night,” Stewart said.

The Len “Boogsie” Sharpe-led Hadco Phase II Pan Groove and Arddin Herbert’s Shell Invaders were also impressive on a night when all 11 finalist brought their A-game to the hallowed Savannah turf.

Boogsie was flamboyant as ever with extravagant runs and big swells on his original composition “2020 Vision”, while Herbert opted for a more consistent bouncy groove on his interpretation of Swappi’s (Marvin Davis) “Feeling It” remake. They finished fourth and fifth, respectively.

Zanda, meanwhile, insisted on showing respect to all the arrangers who competed against him at the National Panorama finals.

“I try to keep in touch with the sound and I listen to all the brothers. All Stars did some nice work this season and my brother Len ‘Boogsie’ Sharpe did some really nice work as well. Invaders were really good too. What ah final eh,” Zanda concluded.

Despers on top of the world

Despers’ Panorama victory was not only for the people of Laventille, but the entire world at large. The band has now taken over the world stag…