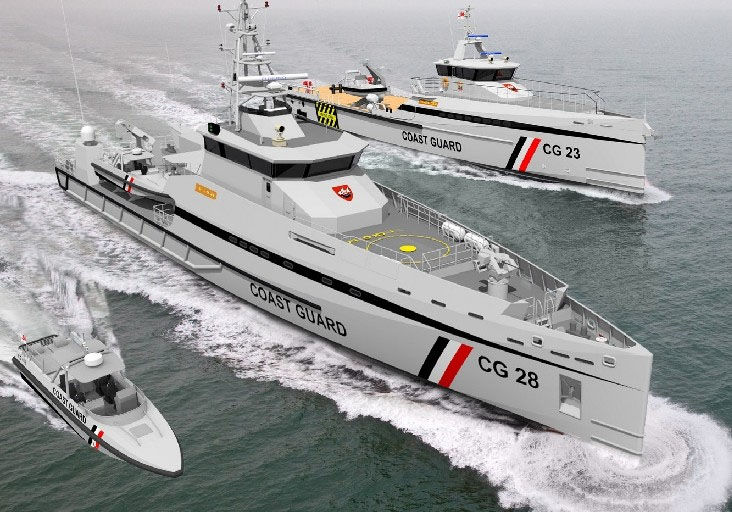 In deep waters: Maritime vessels from Damen Shipyards, Netherlands, acquired by the previous administration for the T&T Coast Guard. 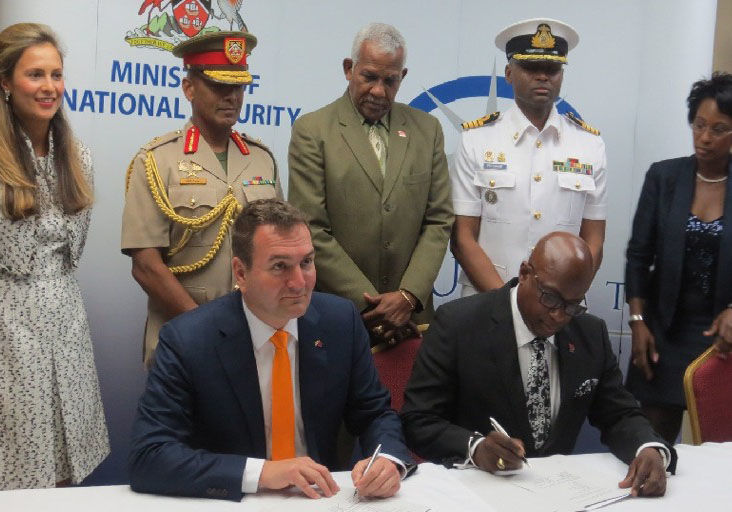 In deep waters: Maritime vessels from Damen Shipyards, Netherlands, acquired by the previous administration for the T&T Coast Guard.

Damen Shipyards, the company hired by the Kamla Persad-­Bissessar administration to supply Coast Guard vessels to Trinidad and Tobago costing TT$1.358 billion, is at the centre of an ­ongoing bribery investigation in the Nether­lands in connection with the ­contract.

The investigation has so far implicated public officials from T&T, Barbados and the Bahamas as ­receiving kickbacks to ensure the contract was granted.

The Express understands the investigation is at a “sensitive” stage, and law enforcement officials have been visiting the Netherlands to keep abreast of developments.

In 2017, Dutch investigators raided Damen Shipyards—which is the Netherlands’ biggest ship builder—as part of a criminal probe into a foreign bribery case, the ­Finance Ministry’s anti-fraud agency at the time had reported.

Investigators from Fiscal Infor­mation and Investigation ­Service had seized documents from the shipbuilder’s head office in Gorinchem.

In an interview with the Express on October 24, Attorney General Faris Al-Rawi confirmed he did attend a meeting last year in the Netherlands to discuss the status of this investigation (Damen Shipyards and its vessels to Trinidad and ­Tobago).

“I am not committed to going to those particulars and in my capacity as attorney general for Trini­dad and Tobago and also the Central Authority. As you know, in the capacity of Central Authority, in particular, it is facilitating requests as well as local requests and, as such, it would be improper for me to disclose the full particulars of those matters,” he said.

Asked whether the goal of the meeting was to strengthen the case which involved bribery allegations against Damen Shipyards and the purchase of fast patrol vessels by Trinidad and Tobago, he said: “I can confirm that I did attend a meeting and I can confirm I did so with another AG from ­another ­jurisdiction in the Caribbean in relation to work which a foreign jurisdiction is ­investigating and which Trinidad and Tobago have certain interests in, coincidental interests, and what I am saying is that the Central Authority of T&T, under law, under the Mutual Assistance and Criminal Matter Act, the AG is the Central Authority, and as the Central Authority you have two roles.

“You facilitate requests that come from law enforcement in T&T to a foreign jurisdiction, or you facilitate a foreign jurisdiction request of T&T, so it’s a two-way street. All I can say, there is a very serious, international criminal investigation, and that as Central Authority and as AG of T&T I have given full cooperation and ­assistance, as I am required to by law, in relation to certain matters and I am saying because it entails criminal investigation and prose­cution I can’t, as AG, go into the particulars of the matter because then I would be offending the role and function of the ­Constitution.”

The Express asked whether a former government minister, a ­local businessman, a local attorney and a foreign agent for Damen were of interest to foreign authorities in this investigation, but Al-­Rawi refused to comment, saying: “It is quite serious. The Bermuda and Barbados governments are also providing ­assistance.”

BAE had signed the deal to provide T&T with patrol vessels and ancillary support in April 2007.

According to the company’s website, the 90-metre vessels could remain at sea for 35 days, with a maximum speed of 25.8 knots, and would be used for a range of Economic Exclusion Zone (EEZ) management tasks, from tackling drug smuggling to helping with disaster relief in the region.

Under the 2007 agreement signed in Port of Spain, BAE Systems had also agreed to provide training and five years’ in-service support to the Coast Guard.

However, the government changed in May 2010, and by ­October 2010 Persad-Bissessar ­announced her government had cancelled the multi-million-dollar contract with the British-based company for three offshore patrol vessels (OPV) for use by the Coast Guard.

The £150 million (US$237.1 million) contract had been signed between the former Manning government and BAE Systems at Portsmouth Naval Base, England.

Persad-Bissessar, in an interview with the media, had confirmed reports that the deal which the Manning government had considered critical to the State’s war on guns and drug running had been scrapped, and that the British company may need to pay ­compensation to T&T.

“I am advised that BAE is in breach of the contract. They are in breach because of two reasons.

“They are in breach because of a delay, which is the most substantial cause we have for termination of the contract. But they are also in breach because they have not been able to supply the vessels that they have been contracted for,” she told reporters.

She said the country had to pay TT$1.4 billion for the vessels, ­given the current economic situation, adding, “Do we need three OPVs?

“The country is not at war... the country is at war up and down in our streets and in the towns and within Trinidad and Tobago,” she said, adding the vessels which had been ordered would not make a significant impact on the drug trade.

“They are slow and visible from way, you could see them from far,” she said, adding, “What may be more useful are smaller faster ­cutters that could hide in inlets and then come out.”

without money in hand

On April 29, 2015, the Ministry of National Security and Damen Shipyards officially signed the Shipbuilding Contracts and Overall Agreement for the construction of Naval Vessels for the Trinidad and Tobago Defence Force’s Coast Guard.

The former government had ordered 12 vessels from Damen Shipyards for TT$1.358 billion for the T&T Coast Guard without the money in hand to pay for them. It was later disclosed by finance minister Larry Howai that the government had suppressed a number of expenditures in 2014, and therefore had a number of options in the Appropriation Bill.

In 2015, the then-government made a down payment of US$75 million to ensure the delivery of the navel assets.

T&T had ordered the vessels covered by the contract to enhance the country’s maritime security and to establish the foundations of a Maritime Security Wall.

The vessels are currently based at Staubles Bay and are in use.

...Trinis in US stretch a helping hand to Joanne