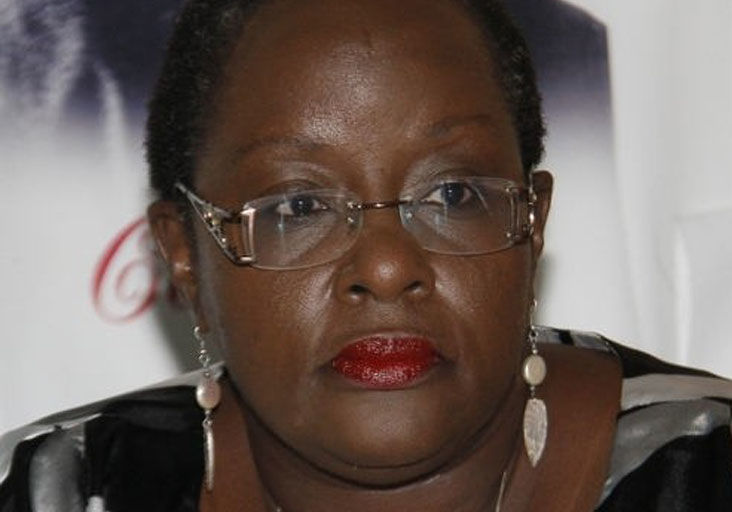 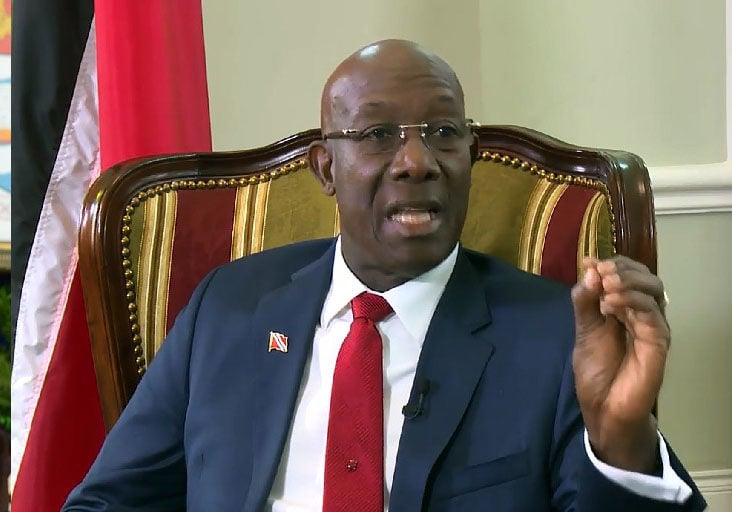 ROWLEY SPEAKS: In this freeze frame image, Prime Minister Dr Keith Rowley fields questions from journalist Khamal Georges during a recorded interview which was done at the request of the Prime Minister's office.

ROWLEY SPEAKS: In this freeze frame image, Prime Minister Dr Keith Rowley fields questions from journalist Khamal Georges during a recorded interview which was done at the request of the Prime Minister's office.

SOCIAL Development and Family Services Minister Camille Robinson-Regis will remain in the Cabinet of Prime Minister Dr Keith Rowley until there is a change in the facts before him.

Rowley, who admitted to being disappointed with former ministers Marlene McDonald and Darryl Smith, has stood by Robinson-Regis in the midst of allegations that she may not have told the truth about the source of $143,800 in cash, with which she conducted two personal transactions at the Arima branch of First Citizens Bank on January 8, 2016.

The Prime Minister spoke during an interview with CNC3’s Khamal Georges, which was aired on that station and on State-run TTT last night.

Questions about Robinson-Regis’s bank transaction were first raised in an Express story and the issue was again before the public two weeks ago, when an Express investigation showed that, contrary to the minister’s claim to the bank, she did not withdraw $143,800 in cash from a personal account at Republic Bank Ltd (RBL), before making the FCB deposit.

Robinson-Regis has denied any wrongdoing and said there is an attempt to sully her name.

Rowley said the information available to him at the time that the issue began and the response to it were based “on the facts as I knew them to be”.

“If there are others who have other facts, and I’m not talking about innuendo and ah feel so and ah think so and it should be so...I’m talking about the facts about the situation as known to me,” Rowley said.

He noted his response to other allegations of misconduct in his Cabinet, where he acted without hesitation and said: “I have acted with the same propriety as the others, if it changes at any time, my situation remains the same.”

Rowley said those in the People’s National Movement (PNM) are held to a certain standard, imposed by themselves, and “You wouldn’t find anybody on a bribery charge and still conducting government business.”

The video was released on social media with the claim that Jennings-Smith was exchanging food cards and hampers for political support.

The PM admitted his disappointment, saying: “Yes, I am very disappointed in the outcome of the Darryl Smith situation and that disappointment resulted in my dismissing him from his portfolio.”

Smith was accused of sexual harassment by a former personal assistant, Carrie-Ann Moreau, who was later fired from the ministry.

“As a young person in the Government, we did have high hopes for a better outcome,” said Rowley.

While Smith was a political novice, Rowley was also forced to contend with allegations that, among other claims of corruption, McDonald had funnelled ministry funding into the Calabar Foundation, an NGO run by her husband, and used her position to arrange Government housing for him.

“I am disappointed in that as well,” Rowley said.

He said it may be recalled that McDonald’s “difficulties” began “three governments ago, under the (Patrick) Manning administration”.

“And, again, that was an element of disappointment.”

He said McDonald had been “quite a good performer in my team” and had done a good job as an MP and a former chief whip of the PNM.

“But there are certain yardsticks you have to be measured by and if you fall short...but we will get over it the way that we ought to,” he said.

The PM was also asked to address the Jennings-Smith issue and said “government food cards” were not to be confused with “party hampers”.

“My understanding is not what you think it to be,” Rowley said.

He said as an MP, he also organises hampers for Diego Martin West constituents and he didn’t understand Jennings-Smith’s conversation to be that she was seeking party support for food cards.

“The MP said, ‘I have organised hampers for my constituents’. That’s acceptable,” the PM said, noting that government food cards had been made available to all MPs across the country.

The PM had admitted that Government’s inroads into crime have not been up to the level expected and entitled to by the national population, but he said the problem did not form overnight and was “not a feature of this administration”.

He also sees no need to remove National Security Minister Stuart Young, who he said is making the effort required.

“He has a very difficult job,” Rowley said of Young.

“I am satisfied he is making the effort required. We all have to make that effort.”

It was pointed out to Rowley that former national security minister Edmund Dillon was removed as heat was placed on the Government to get crime and especially the murder rate under control.

“I don’t see ministerial change as a response,” Rowley said, adding that Young brings “energy and dedication” to the job.

He said much of the progress made was as a result of Young bringing national security agencies together as a team.

Rowley also had nothing negative to say about Commissioner of Police Gary Griffith when asked if he was satisfied with the CoP’s performance.

“Yes,” the PM said, adding that the Trinidad and Tobago Police Service had been missing leadership in the form of a substantive CoP.

“I am satisfied that leadership is being brought to bear on the problem we are trying to solve,” he said.

Rowley also warned young people away from marijuana, which has been decriminalised in amounts of 30 grammes or less, saying: “I want to appeal to our young people...especially those easily influenced at the high school level, that smoking marijuana is not to be recommended.”

He said he knew persons who had ruined their lives with the substance, which he said was classified as a dangerous drug for a reason.

He said decriminalisation was “not a licence to go and burn as many acres as you could, and say it’s a free-up”.

SOCIAL Development and Family Services Minister Camille Robinson-Regis will remain in the Cabinet of Prime Minister Dr Keith Rowley until there is a change in the facts before him.

THE executive of the Public Services Association (PSA) has been ordered by the High Court to commission an audit of the union’s finances by the end of this month.

ARTIST and historian Adrian Camps-Campins, whose work also made him an ambassador of Trinidad and Tobago culture, has died.

THE constitutionality of Trinidad and Tobago’s colonial-age sedition laws will be determined today by a High Court judge as the court delivers its ruling in a claim filed by secretary general of the Sanatan Dharma Maha Sabha (SDMS) Sat Maharaj, who has since died, and SDMS media house Central Broadcasting Services Ltd.

TWO more men were shot and killed during separate shooting incidents in Arouca and Aranguez.