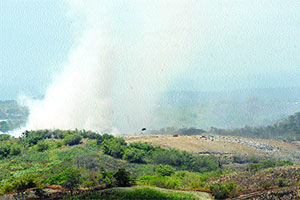 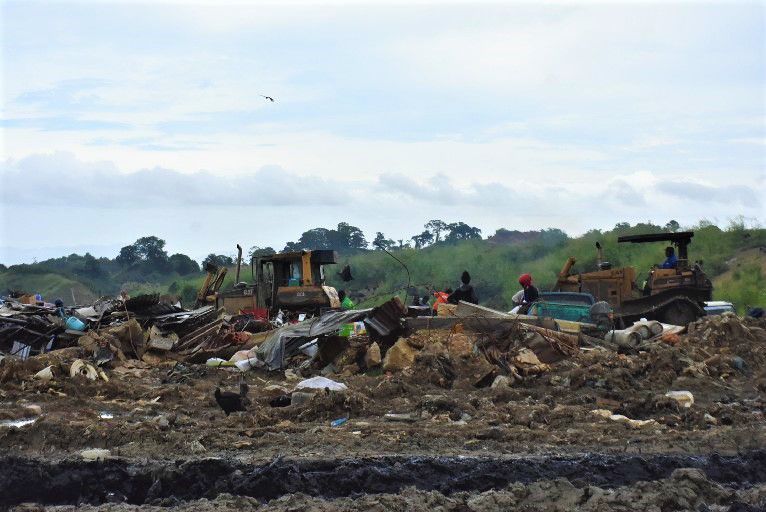 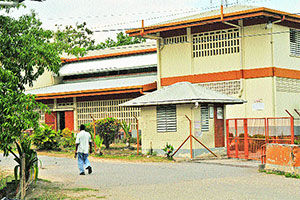 The Springvale Hindu Primary School which has been closed several times because of the smoke emanating from the Forres Park landfill in Claxton Bay. Photo: INNIS FRANCIS

Speaking to the Express on Monday, Rambachan said he has had a number of complaints from residents about the stench and poor state of the landfill which he said the condition continues to deteriorate.

Rambachan, who is the MP for the area, said waste is being dumped on the side of the roads and this has residents fearful of the potential health and safety risks along the Tortuga Road.

“It is in a bad state and from the sightings there it leaves a lot to be desired. There is too much dumping along the roads there and some of those products dumped can be hazardous.

And what I can’t understand is why the authorities is allowing people to do that. They just dump indiscriminately on the roadways. This is an environmental problem that have the potential to become a major disaster. Major companies and institutions are collapsing before our eyes and people are only engaged in politicking rather than dealing with the issues that affect the lives of citizens,” said Rambachan.

He said every year he makes the same appeal for the situation to be rectified and nothing is done by either the state or the Trinidad and Tobago Solid Waste Management Company (SWMCOL).

He said that it is not only the residents living close to the dump who are affected but thousands more living in the catchment areas as air pollution has become a real threat to their lives and livelihood.

Rambachan again called on the authorities responsible to clean up the dump and take their responsibility of doing so seriously.

In an emailed response to the landfill issue SWMCOL’s general manager- communication, sales and marketing, David Manswell said SWMCOL recognises the value of an Integrated Waste Management System that adopts sustainable approaches to waste / resource treatment rather than the sole reliance of landfilling where valuable resources are lost.

He said SWMCOL also understands the importance of landfills in waste disposal and their current role in managing public health in Trinidad and Tobago.

“The landfills require remediation. This however must be done in tandem with the installation of alternative waste disposal / management options such as waste reduction / minimisation, recycling or special waste treatment systems. These waste diversion strategies will alleviate the burden on the landfills and allow for a shift in waste management to more sustainable / integrated systems,” he said.

Manswell said the agency has implemented four recycling programmes, which include; the Community Youth Outreach, the Public Sector Recycling Programme (PSRP) and Workplace Waste Reduction and, Recycling Programme (WRAP) both which focuses on recycling at work, concentrating on the reduction, collection and recycling of paper and post-consumer beverage bottles.

He said SWMCOL works in partnership with municipalities to make recycling at home an option with its ‘Curbside Recycling Programme’ and this has been initiated in areas of San Fernando, Arima, Couva, Tunapuna Piarco, Sangre Grande, Point Fortin and Port of Spain. Additional, SWMCOL is in the process of developing conceptual designs for Engineered Landfills in Trinidad and Tobago.