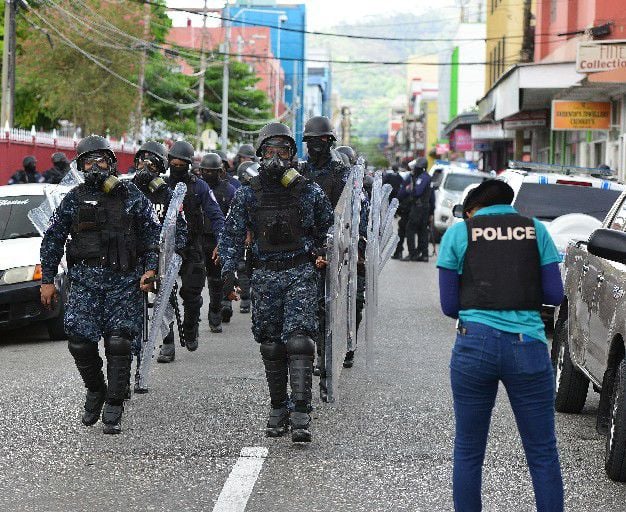 ON THE MOVE: Members of the police Guard and Emergency Branch march in formation with their riot gear yesterday after dispersing a group of protesters on Frederick Street, Port of Spain. 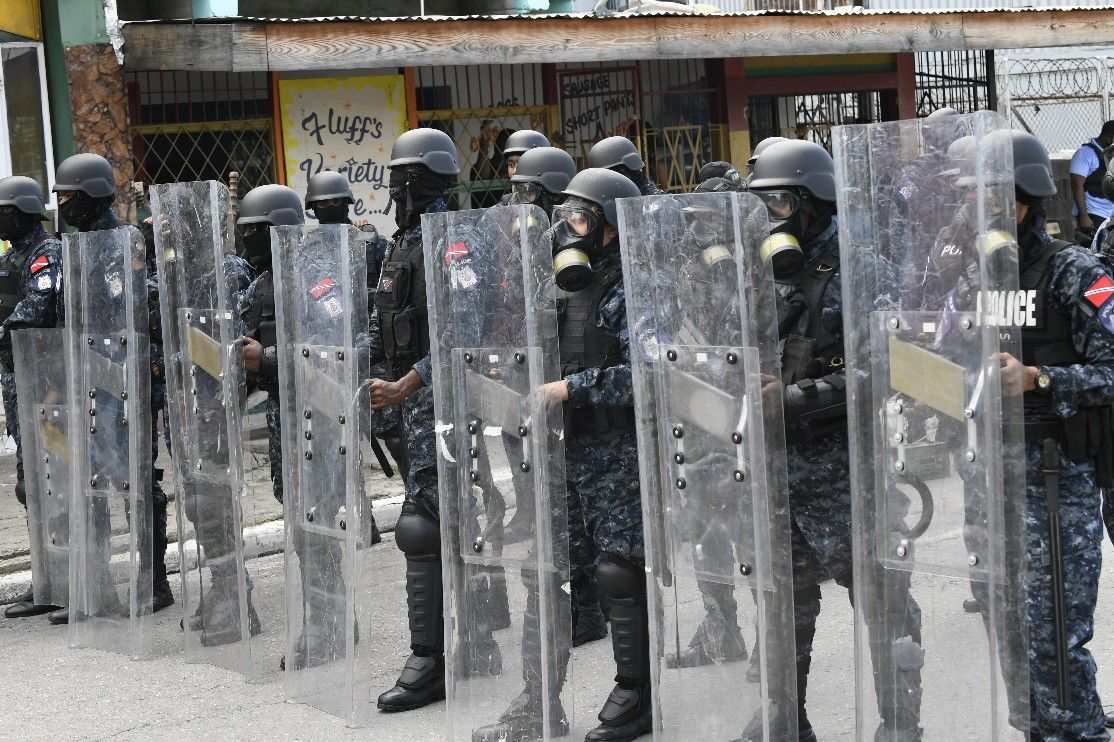 READY: Members of the Guard and Emergency Branch of the Police Service stand in formation with their shields yesterday after dispersing a group of protesters in Sea Lots.

ON THE MOVE: Members of the police Guard and Emergency Branch march in formation with their riot gear yesterday after dispersing a group of protesters on Frederick Street, Port of Spain.

READY: Members of the Guard and Emergency Branch of the Police Service stand in formation with their shields yesterday after dispersing a group of protesters in Sea Lots.

Police yesterday fired tear gas and bullets in the air to disperse a crowd of protesters gathered in downtown Port of Spain, ordering them to go home.

Protests, which began on Monday and continued Tuesday, resumed yesterday in smaller numbers and locations in the capital city and Sea Lots.

Despite a heavy police presence and a show of force in the capital, spooked business owners closed their doors early, sending employees home, leaving the city with little economic activity by around 3 p.m.

One group of about 75 people from Sea Lots and Beetham Gardens were about to walk into downtown Port of Spain until they were sent back by heavily armed police.

Police said between 12.30 and 12.45 p.m., a group of about 40 were seen walking along the side of the Beetham Highway towards Sea Lots where they met another group of about 30.

Police from the Guard and Emergency Branch, armed with guns, batons, shields, flash grenades and tear gas, arrived on the scene just as the now larger group was about to walk into Port of Spain from Production Drive.

Ordering the group to go back, police said some of the protesters began throwing stones at the offi­cers who then fired shots in the air which quickly dispersed them.

A similar scenario occurred along Frederick Street when two groups, numbering around 25 each, walked from East Port of Spain through Prince Street onto Frederick Street.

Waiting for them on the Woodford Square side of Frederick Street were police who used harsh verbal commands of, “Allyuh go from here!”

As the protesters stood their ground holding up placards, some saying, “Blacks lives matter here too”, police issued their commands again.

This too didn’t work, so officers pointed their guns upwards and opened fire while cannisters of tear gas were fired.

The groups quickly dispersed, all heading into East Port of Spain.

When the Express visited Nelson and Duncan Streets, remaining groups of men and women were still visible, but they stood behind walls in the yards of their apartment blocks, with police vehicles parked at the top of both streets.

One protester said: “I watch how the people commented on us on Facebook and they said how we was blocking the road and targeting certain cars, so today we said we would take a different approach.

“We all understand what is going on, but they are calling us gangs and I am okay with that because to do something good, yuh have to gang up because I alone cannot do it, and that’s why we came out today.”

Another man said: “Everybody saw the video in plain sight about what happened, so what will we do?”

The video he spoke about was the police shooting deaths of three men, all in Morvant, last Saturday.

The video showed an encounter between the police and Noel Diamond, 46; Joel Jacobs, 43; and Israel Clinton, 27.

While police said they were defen­ding themselves after stopping the men, the men’s friends and relatives insisted the three were killed unjustly.

Another protester said: “To (Police Commissioner) Gary Griffith and his posse...don’t shoot no people. Don’t shoot none of us because we have rights, too, as Trinidadians, so find the officers responsible for what happened and clean up that.”

Sea Lots resident Marlon Sylves­ter said: “Mr Gary Griffith, you cannot address everything in a hasty manner. We know you are a trained man.”

The Express spoke to several business operators as well.

One man seen hurriedly locking the doors of a clothing store on Henry Street said: “I heard that they looted out a jewelry store on Prince Street, so I not taking any chances.”

Along Frederick Street, many businesses had shut their doors by 2 p.m. while along Charlotte Street, businesses scrutinised people before allowing them in.

“We would not allow mob rule to take over the city.”

Taxpayers now have to foot close to $10 million in damages to 20 former employees of the Security Intelligence Agency (SIA) who were dismissed by the Kamla Persad-­Bissessar regime.

The Industrial Court, in a ru­ling handed down on Wednesday, minced no words, with the panel describing the dismissals as “patently egregious” while, at the same time, slamming the Ministry of National Security under the former administration for not tendering a defence despite being ordered by the courts to do so.

Fifteen more people tested positive for the Covid-19 virus yesterday and are now in hospital. The Ministry of Health’s Covid-19 updates yesterday indicated that it was still unknown how 12 of the newest cases contracted the virus, as epidemiological investigations were being done. Three of the patients contracted the virus from recently positive Covid-19 patients, the Ministry noted.