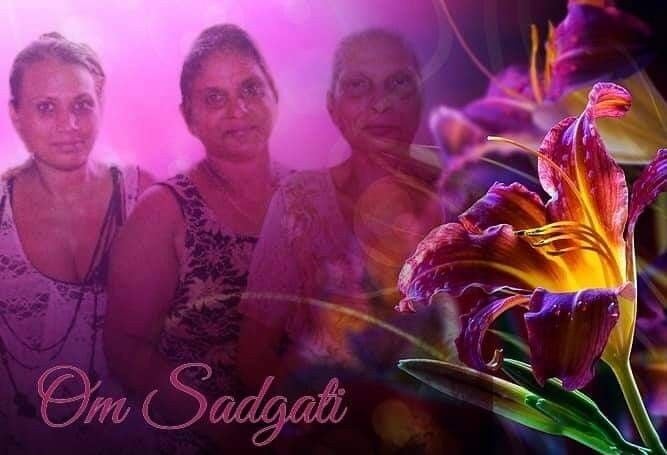 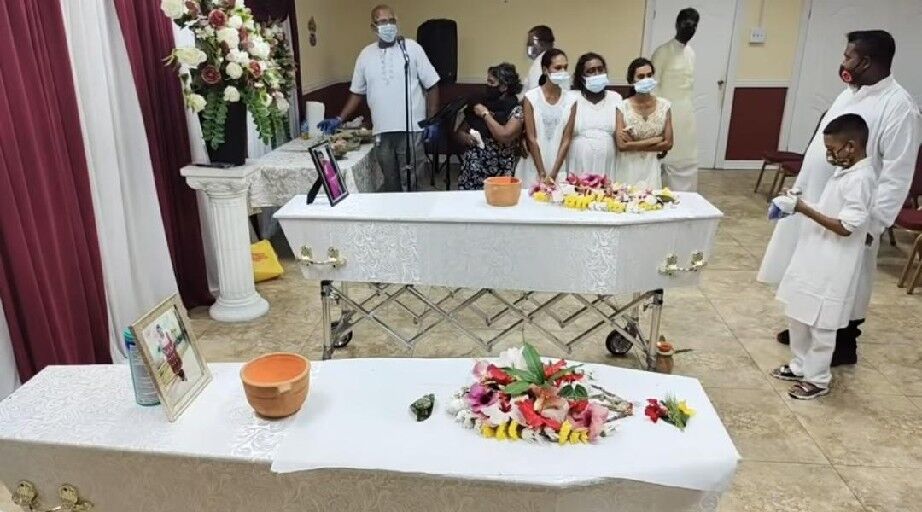 double funeral: The funeral of Parbatee John and her daughter, Sohanee, on Monday in Carapichaima.

double funeral: The funeral of Parbatee John and her daughter, Sohanee, on Monday in Carapichaima.

In the space of 25 days, three members of a Cunupia family died from the Covid-­19 virus while four others tested positive.

The matriarch of the family, Surujdaye Heeraman, died at the Arima General Hospital on Sunday, without ever knowing that her eldest daughter and granddaughter had died before her.

Heeraman, 74, was laid to rest at the Monroe Road Public Cemetery yesterday, 21 days after she was admitted to hospital.

The family’s heartbreaking story of loss and grief be­gan in June when Heera­man’s son-in-law was admit­ted to the Eric Williams Medical Sciences Complex for a kidney ailment.

Roopnarine Persad, 73, was taken to hospital for routine dialysis on June 8, but the procedure was delayed as he was required to undergo a Covid test. He tested negative for coronavirus.

Persad’s wife, Parbatee John, would visit her husband daily until he was discharged on June 14.

His condition rapidly deteriorated and he died at his Ramsingh Street home four days later from renal failure. His funeral was held on June 23.

The next day, his wife, Parbatee John, complained of feeling unwell, relatives said.

John, 53, was taken to a private doctor for treatment, but was advised to go to a public heath facility as she was displaying symptoms of Covid-19.

“She had only left her house to go to the hospital to visit her husband. She would visit him once a day because he needed help to be cleaned. My sister never left her house and the family followed all protocols to protect themselves from Covid,” sister Rohanee Heeraman told the Express this week.

John was however infected with the virus and was taken to the Eric Williams Me­dical Sciences Complex where she sat for a day and night in a tent outside the hospital, relatives said.

It was the last time her family would see her alive.

“We would speak to my sister on the phone every day at hospital. We knew she was in trouble because she was having problems breathing. The doctors would also call us to give us updates on my sister,” Rohanee said.

The last call came on July 7 at 3 p.m., three days after she was transferred to ICU. John, a mother of one, had passed away earlier that day at the hospital.

Parbatee John was not aware that her only child, 40-year-old Sohanee, had also tested positive for the Covid virus.

Sohanee, a widowed mo­ther of three children, was in home isolation.

Rohanee told the Express: “My niece (Sohanee) did not want to worry her mother and make her condition worse, so she did not tell her she too was positive. She was isolated at home but she has asthma. Sohanee lived in Charlieville, but after her father’s death she would go to spend time with her mother, and she was the one prepa­ring the funeral because she was their only child.”

On July 12, Sohanee began experiencing shortness of breath at home. Her children, ages 17, 14 and 12, reached out to their aunt for help.

“I spoke to my niece at 9.30 a.m. and she said she was feeling for dahee (yoghurt), so I told her I will get it and bring it for her. Half an hour later, I saw her daughter calling me. The child was crying and said her mother can’t breathe.

“I called the ambulance and gave the daughter’s number for directions because I am not living there. The paramedics took a long time to ask questions about how they knew their mother was Covid-positive and other things,” Rohanee said.

Rohanee said she and other relatives contacted the children on a video call.

“What I witnessed there would remain with me for the rest of my life. My eldest sister was gasping for breath, she couldn’t speak. Her three children were screaming for their mummy. My other sister and I watched on that video call as my sister took her last breath and died right there in front of her children,” she cried.

By the time paramedics arrived, they could do nothing.

A double funeral was held for the mother and daughter on Monday.

The sealed coffins were carried in a single hearse through the community as residents came outside their homes to say goodbye.

“It was so emotional to see everyone come out of their homes when the hearse was passing and throw rice and flowers as a sign of respect. The women were both Hindus and involved in the community. Everyone loved them,” Rohanee said.

And following a simple funeral service at Boodoo’s Funeral Home in Cunupia, the mother and daughter were cremated at Belgroves crematorium in San Fernando.

The deaths of the mother and daughter were not known to John’s mother, Surujdaye Heeraman, who had also tested positive for the Covid virus.

John had lived with and cared for her mother.

Relatives said the elderly woman was aware that her daughter (Parbatee John) had been admitted to hospi­tal, but she had not known that John’s daughter was also infected.

Heeraman, a pensioner, complained of feeling unwell on June 27 and was taken to the Arima General Hospital by ambulance.

Rohanee said: “That was the last time I saw my mother. She walked into that ambulance and I waved to her. She could not use a phone so we could not speak with her.”

The family was contacted by hospital officials daily to re­port on Heeraman’s condition.

Maybe it was a mother’s instinct, relatives said, but on the day John died at the Couva Hospital, Heeraman asked to speak with her family from her hospital bed.

“A nurse at the hospital video called me and we got to see my mother. The first thing she asked was how Sabita (Parbatie) was doing. She knew my sister was at hospital, but nobody told her she had died. And although she had died, we did not tell my mother because she would have been devastated. We told my mother that her daughter was still at hospital and she was improving,” Rohanee said.

That same day, Heeraman was wheeled into the hospi­tal’s ICU as her condition had deteriorated.

The elderly woman died on Sunday, the day before the double funeral.

In the past month, eight other family members had been tested for the Covid virus and three had positive results.

“My sister who lives in the same house with Parbatee, her husband and their eight-year-old son had tested positive. Sohanee’s three children are negative,” she said.

Rohanee John says she was the only family member to be vaccinated.

“I had received my first dose of the AstraZeneca vaccine when this started and I believe that saved my life. When Parba­tee was admitted to hospital, I went to her house and I slept on the same bed as my mother, not knowing she had already been infected. I got the first dose of the vaccine and when I tested, I was negative,” she said.

Rohanee said she has encouraged other family members to be vaccinated.

She said the Covid virus had broken her family and turned their lives upside down. “People need to know that this coronavirus is a death sentence. It is real. Take a look at what happened to my family. You do not want this happening to you, that pain and heartache.

“The last time I saw my mother and sister was when they left for the hospital. I watched my niece die on a video call. We never got to see their bodies. This virus is breaking families and destroying lives. Please, Trinidad and Tobago, get vaccinated and do not allow what happened to my family happen to yours,” Rohanee said.