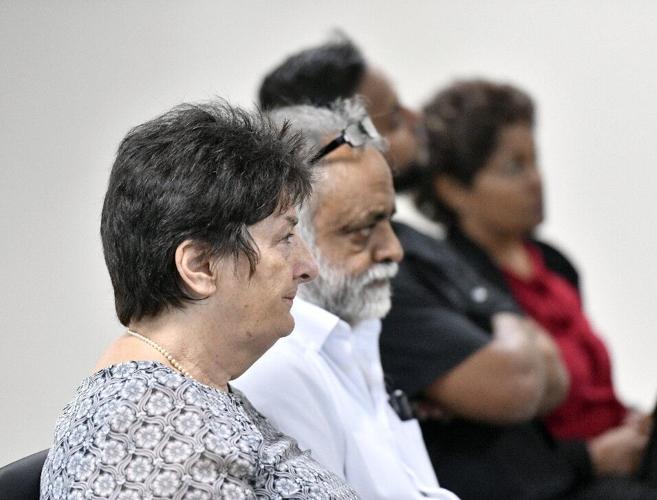 SOMBRE: Relatives of the four divers who died in the Paria tragedy, from left, Katherine and Kazim Ali, parents of Kazim Ali Jnr, along with Nicholas Kurban and Celisha Kurban, wife of Fyzal Kurban, at Monday’s sitting of the Commission of Enquiry into the Paria diving tragedy at the International Waterfront Centre in Port of Spain. —Photo: JERMAINE CRUICKSHANK 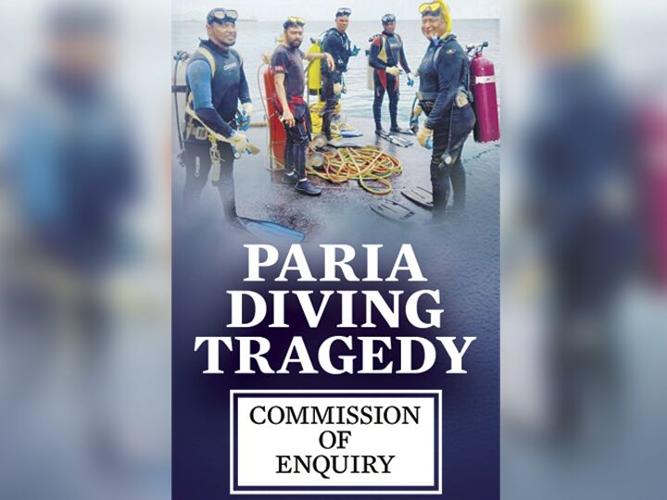 SOMBRE: Relatives of the four divers who died in the Paria tragedy, from left, Katherine and Kazim Ali, parents of Kazim Ali Jnr, along with Nicholas Kurban and Celisha Kurban, wife of Fyzal Kurban, at Monday’s sitting of the Commission of Enquiry into the Paria diving tragedy at the International Waterfront Centre in Port of Spain. —Photo: JERMAINE CRUICKSHANK

LMCS managing director Kazim Ali Snr says his company had a rescue plan to get the four trapped divers, including his son Kazim Ali Jnr, out of the pipeline alive but was prevented from doing so multiple times by Paria Fuel Trading Co Ltd.

In his witness statement to the Commission of Enquiry (CoE) dated August 28, 2022 and October 5, 2022, he stated that he had indicated to a Paria official that this rescue plan was easier to execute than the plan executed in Thailand in 2018 where 13 people were rescued.

In 2018, 12 teenagers and their coach were trapped in a cave in Thailand which was flooded by monsoon rains. They were rescued after nearly two weeks by foreign expert divers.

“I reminded Catherine (Paria employee) about the underground cave rescue in Thailand in 2018 where divers escorted 13 people through 1.5km of narrow channels through fast-flowing muddy water, an endeavour a lot more difficult than what LMCS was proposing. Catherine said it was not up to her but she would discuss it with Paria management. At that time the general manager was in a meeting with the Minister of Energy and she had to wait on them to be finished,” he stated.

In his witness statement, Ali laid the blame for the deaths of the four divers squarely at the feet of Paria, stating that the company was “deceitful” and had no intention of rescuing the divers but tried to involve LMCS in their “charade”.

Ali and his wife, Katherine, have attended every hearing of the CoE. On Monday, they exited the CoE room at Tower D of the International Waterfront Centre, Port of Spain, when video footage of the divers’ last conversations was played.

Ali stated when he learnt of the diving incident that occurred on February 25, 2022 at around 3 p.m. he figured that the men “could only be inside the pipeline and could all survive for at least an hour with the dive air available”.

Ali stated that in half an hour, the LMCS team, which included himself, had devised a plan to effect a rescue using available scuba sets and umbilical whilst they reached out for additional resources.

He noted that around 4.30 p.m. diver Christopher Boodram came into the habitat and was assisted out of the chamber and placed on a standby boat by divers Rolly Ramoutar and Corey Crawford to be taken ashore.

“Before he left the site, he declared that the rest of the men were alive in an air pocket and we should rescue them. Paria engineer, Visham Harrichan, had attempted to stop Rolly and Corey from going into the habitat to retrieve Christopher, citing instructions from Colin Piper,” stated Ali.

“On hearing Christopher say the men were in an air pocket, Michael Kurban, a commercial diver, went down the riser and into the horizontal section of the pipe as far as the umbilical would allow, approximately 10-15 feet. He found a dive tank and regulator which he recovered. When he and other divers were preparing to return with gear that would allow greater penetration, they were prevented from doing so by Paria,” he added.

He stated that at approximately 6.30 p.m. LMCS employees reported hearing signalling noises coming from the Berth #5 end of the 36 Sealine.

“ I requested the okay to do the rescue again, telling Paria (Catherine Balkissoon) that we had a plan and resources to so do. Once more, we were refused permission from Incident Command Centre, via Catherine,” he stated.

He stated that on that same day at 8 p.m. LMCS was given the okay to install pre-fabricated riser top section in order to bring riser to above sea level to allow removal of blank at #5 Berth, and eventual removal of habitat at Berth #6.

He added that the riser add-on was installed but permit to open riser at #5 Berth was withdrawn by Paria, saying that they did not want to disturb the air pockets that were keeping the divers alive.

Ali said LMCS was prevented from doing the rescue even though distress calls were being heard and up to seven hours were “squandered” without action.

He stated that LMCS personnel remained on standby for the next 60 hours in the hope of rescuing their fellow workers.

Ali then detailed what happened the next day on Saturday February 26, 2022:

He and other LMCS workers were denied entry into the Paria compound by Paria Security and had to wait until 9 a.m. for Piper to authorise their entry.

At 10 a.m. he met with Catherine Balkissoon, Michael Wei, and Paul Yearwood.

“I wanted to convince them that a dive rescue should be undertaken and that we had the resources on site. Catherine Balkissoon declared that Paria was not going to send divers into the pipe as they considered rescue diver entry too dangerous and they had devised their own plan, which was to pump out the line and send in confined space experts to bring out the men,” he stated.

Ali stated he had seen the pump they intended to use and indicated to Balkissoon that the pump would not be able to pump out the line from the riser at No 5 Berth as they would lose suction before they removed 20 barrels from the line. He stated that he further advised that she would not find anyone willing to go down a dry riser into the dry horizontal, and that was a job for divers in a filled pipe and this was confirmed when Balkissoon received a call and said that there was no one willing to go into the pipe.

He stated that they then discussed his plan for dive rescue which he detailed.

Ali stated he drew reference to the Thailand cave rescue at this time.

At 4.30 p.m. on Saturday, Paria requested a meeting with the divers willing to execute the rescue and fixed the meeting for Sunday, February 27.

He stated that Paria’s general manager Mustaq Mohammed asked him to accompany him to the families of the men in the pipe. Ali said he first led the way to his son’s family. They did not visit any other family.

Ali stated that on Sunday the LMCS team met with the Paria team led by Mohammed, supported by Heritage Petroleum CEO.

Ali stated that at this stage, Paria told LMCS that they had video footage of up to 150 feet into the pipe and they showed what appeared to be two dive sets in the pipe and these tanks would block rescue efforts.

“Conan assured Paria that he could easily remove tanks by tying with rope and pulling. Paria opined that those tanks were pressurised and could have gotten damaged and could explode if handled. LMCS had a closer look at the footage and concluded that the tanks were de-pressured and floating in the line and not stuck,” he stated.

Paria, he stated, requested a written proposal that they would share with their experts before making a decision.

Ali stated that this was immediately submitted to Paria at 2.19 p.m.

He stated that at 3.30 p.m. the team met with Paria group in their conference room at Shipping building in Paria, along with their experts online and they were handed a press release they had prepared for his comment.

Ali said he did not agree to the press release and it was released without their approval of the final version.

He stated that they went through the rescue plan with Paria.

“After comments from Paria team and my objections, Mr Mohammed concluded the meeting saying they would no longer consider rescue and were fully committed to recovery. Paria Chairman Mr Newman George then requested Imtiaz (brother of Kazim Ali Snr) join them on a televised press conference to inform the public of the decision to recover the divers. Imtiaz declined because, like me, he did not agree with the decision to go to recovery without being 100 per cent sure that all four persons were no longer alive.” He stated.

Ali stated that it was obvious from Mohammed’s response to a query from a reporter that even Mohammed and Paria were not convinced that the men were dead when he said “the advice we have gotten is the likelihood of survival is extremely low”.

“It is at this point I realised that Paria never had any intention to launch a rescue or allow anyone else, LMCS included, to rescue; and that all their discussion with me was just a charade to have it appear as if my brothers and I were part of the decision to allow the men to die in the pipeline and then recover their corpses later,” he stated.

“Paria’s forceful and armed refusal to allow LMCS to undertake rescue of our workers or undertake their own rescue defies belief,” he added.

“Michael Kurban also defied them and dived inside the riser to look for his father after hearing Christopher’s shouts that Fyzal was right behind him and the rest of them were alive in an air pocket in the line. He could only get about ten feet into the horizontal section of the line due to length of umbilical where he found and recovered a dive set,” he stated.

“He was prevented by armed Coast Guard’ officers who pointed a weapon at him from making a second dive that would have saved Fyzal’s life and the others behind him,’ he stated.

Ali also criticised the time wasted while rescue efforts could have been taken.

He stated that eight hours were lost waiting for video footage of the inside of the riser in critical hours following the incident.

He stated that if Boodram came out the pipeline then rescue efforts would be successful.

“A battered and bruised Christopher made his way from the air pocket to the top of the riser, unaided. It is inconceivable that fresh, outfitted divers were not allowed to go in with rope, air line and communication, to escort the four men out of the line. I found Paria to be deceitful in their press release of February 25th & 26th when they said that rescue efforts were ongoing after they denied the attempted dive entry into the pipeline to effect rescue,” stated Ali.

Gran Couva residents are sounding an urgent call to the authorities, as homes are now being …

Before the colonisers arrived in that part of the island, Trinidad’s east coast was the doma…