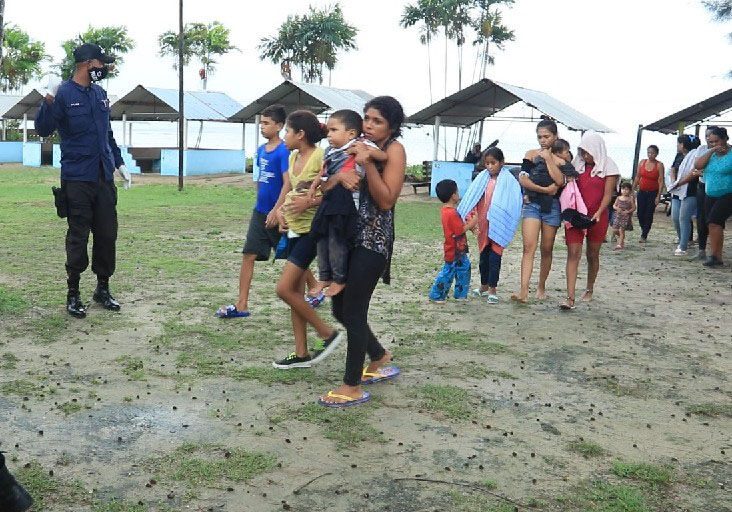 BACK IN TRINIDAD: Venezuelan migrants, who were deported Sunday on a pirogue, walk through the Los Iros Beach facility guided by a police officer after returning to Trinidad yesterday afternoon. —Photo: CINDY RAGHUBAR-TEEKERSINGH 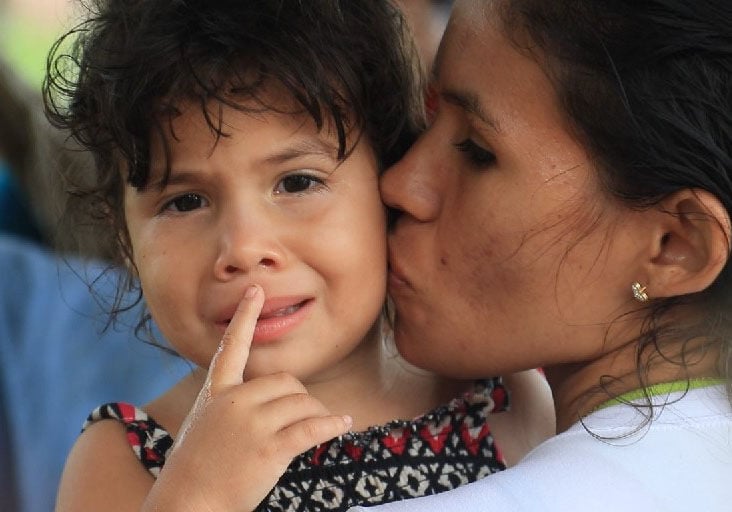 COMFORTED AFTER ORDEAL: Venezuelan mothers comfort their traumatised children on their return to Trinidad yesterday by pirogue after being deported on Sunday. 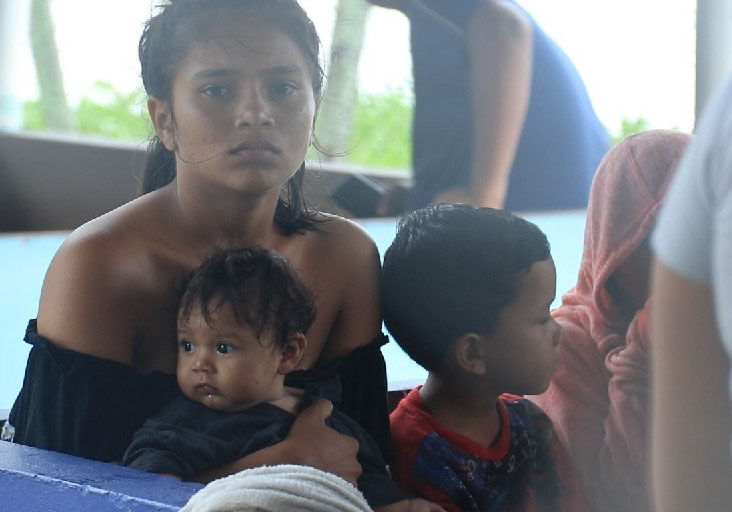 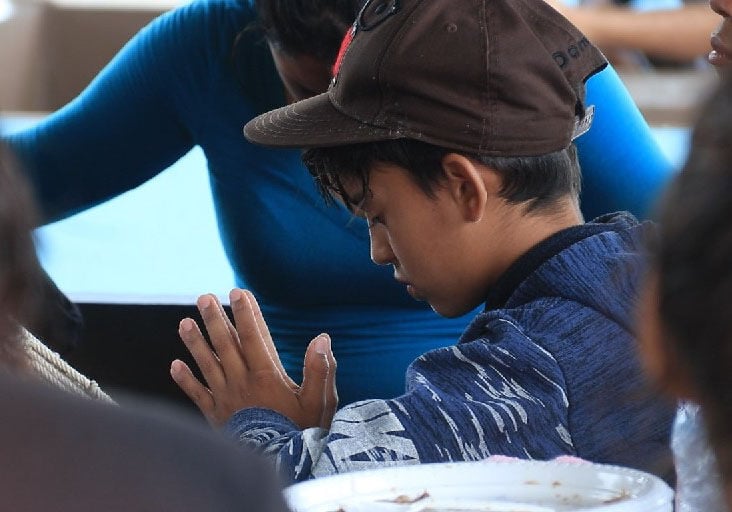 Venezuelan migrants at the Los Iros beach facility after embarking from a fishing boat yesterday afternoon. Note! ALL photos were taken by CINDY RAGHUBAR-TEEKERSINGH 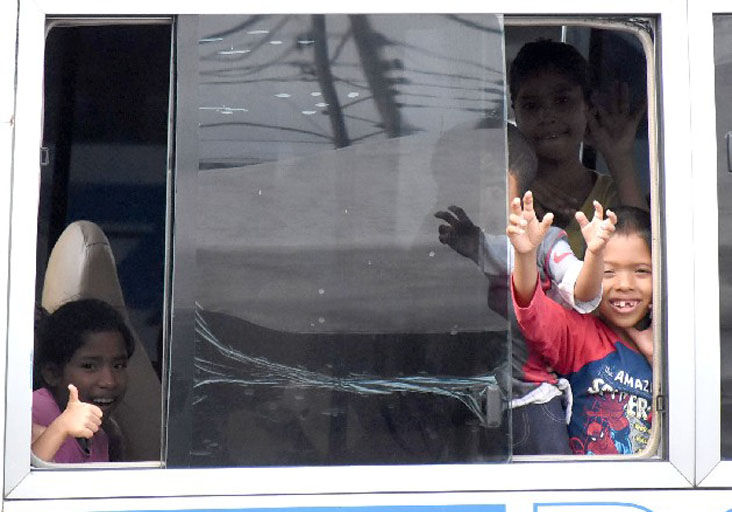 children WAVE: Children of Venezuelan migrants who were detained after they returned to Trinidad in a pirogue at Los Iros Beach in Palo Seco yesterday, wave from a police vehicle on the compound of the Siparia District Hospital.

BACK IN TRINIDAD: Venezuelan migrants, who were deported Sunday on a pirogue, walk through the Los Iros Beach facility guided by a police officer after returning to Trinidad yesterday afternoon. —Photo: CINDY RAGHUBAR-TEEKERSINGH

COMFORTED AFTER ORDEAL: Venezuelan mothers comfort their traumatised children on their return to Trinidad yesterday by pirogue after being deported on Sunday.

Venezuelan migrants at the Los Iros beach facility after embarking from a fishing boat yesterday afternoon. Note! ALL photos were taken by CINDY RAGHUBAR-TEEKERSINGH

children WAVE: Children of Venezuelan migrants who were detained after they returned to Trinidad in a pirogue at Los Iros Beach in Palo Seco yesterday, wave from a police vehicle on the compound of the Siparia District Hospital.

A witness described it as a painful sight.

Tossed about in the unforgiving waters of the Columbus Channel, an exhausted group of Venezuelan migrants, including the 16 children deported on Sunday, turned up on Trinidad’s south coast yesterday, desperate for help as food, water and fuel had run out.

Their pirogue, packed with women and children ages four months to 12 years, returned to local waters two days after the Trinidad and Tobago Coast Guard escorted them into Venezuelan territory on Sunday.

The police arrived not long after. Last night, 29 migrants were back in custody awaiting deportation, again.

The return of the Venezuelans came as a surprise to National Security Minister who said at a news conference yesterday he knew nothing of it.

The handling of the group by law enforcement and the circumstances surrounding their deportation has become an international issue which is being condemned far and wide.

The exact whereabouts in the days after they were deported are unknown, but around 12.15 p.m yesterday the boatload of hungry and crying children arrived at Los Iros Beach seeking assistance.

As the pirogue neared the shore, the women and children jumped into the surf. The children, their clothing drenched, collapsed on the sand and the women cried out for help.

Locals staying at a beach house at Los Iros ­assisted the migrants, with one man attempting to console a crying boy.

The group huddled at a nearby bus shed trying to keep warm.

The migrants say they were not aware of the outcome of the legal proceedings that played out before Justice Avason Quinlan-Williams on Monday, the Express was told.

The judge ruled that the court’s jurisdiction extended only to the territory of Trinidad and Tobago, and the habeas corpus application filed by the attorney for the Venezuelans, Nafeesa Mohammed, could not be pursued since the group was no longer in the jurisdiction.

The pirogue, the Express was told, had not made it to mainland Venezuela and the group had spent the night out at sea, battered by heavy rainfall and then scorching sun.

A man who witnessed the event said he was heartbroken by the children’s screams and ran out to help them.

Three men, all Venezuelan nationals, displaying registration documents, arrived on the scene, saying their wives and children were in the group.

One of the men, who spoke little English, said he was worried about his children, ages four, six and eight, who appeared to be unwell. The father said he arrived in Trinidad two years ago in search of a better life for his family. The Express was told that the migrants had run out of water and food on the vessel and many began falling ill.

“I was on the beach and I noticed a boat coming in with people on board. I realised it was Venezuelans but they all looked very distressed. A man went in and held the little baby who was crying. It was a very painful sight. These people were hungry, they were wet, and most of them were children,” an eyewitness said. The Express was told that a family who was staying at a beach house cooked a meal of rice and chicken for the group as they waited to be taken a detention location.

The Venezuelans were placed in a Trinidad and Tobago Police Service bus and taken to the Siparia Health Facility.

They were examined and then returned to the bus and taken to the Siparia Police Station to be processed, police said.

The Venezuelan nationals were detained by officers of the South Western Division shortly after they arrived on the south coast last week.

Officers of the Emergency Response Patrol (ERP) went to Chatham Bay as the fishing vessel arrived.

They were taken to the Erin Police Station before being transferred to the Cedros Police Station, where some, ­including children, were kept in cells. The Immigration Division was never ­involved in the process of the migrants.

On Saturday, attorney Nafessa Mohammed appealed to the authorities to not deport the 16 Venezuelan children.

Mohammed filed an emergency habeas corpus application to the court to stop the deportation, arguing that some of the children had relatives in Trinidad who are registered and have Trinidad and Tobago registration cards.

By Sunday, however, the children were deported before the matter was heard. And when the matter was called virtually, Justice Avason Quinlan-Williams was informed that the group was already back in Venezuela.

So said St Augustine resident Amber Gonzales, 71, as she exited the Morvant Health Centre after getting her Covid-19 vaccine yesterday morning.

Health Minister Terrence Deyal­singh is unable to determine the impact of the decision to destroy 60 million doses of Johnson and Johnson (J&J) Covid-19 vaccines, at a Baltimore, Maryland, plant in the United States, on Trinidad and Tobago’s order of 800,000 J&J doses due to arrive in August.