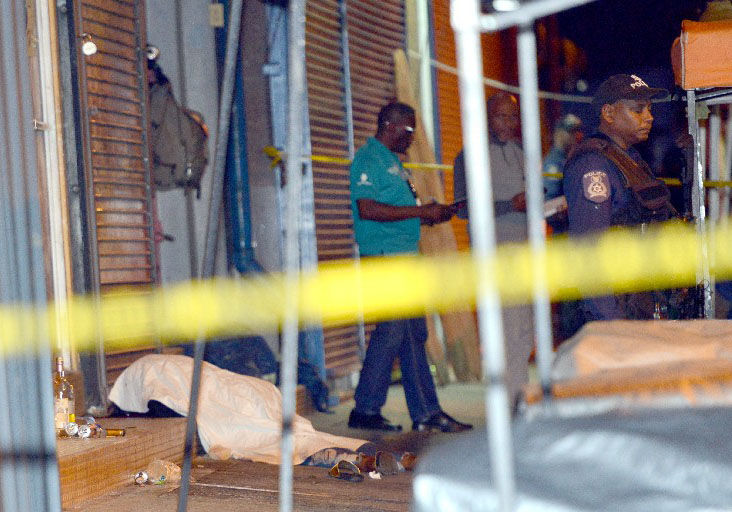 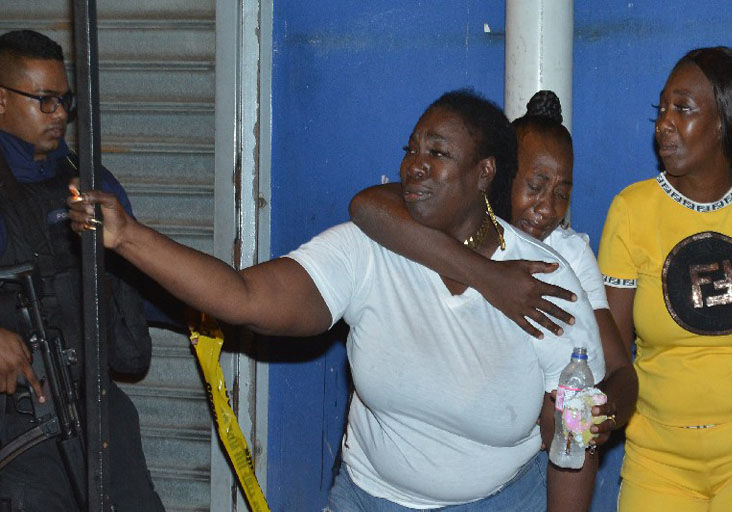 A police officer looks on as relatives of Natoya Christian console eachother last evening on Charlotte Street, Port of Spain.

A police officer looks on as relatives of Natoya Christian console eachother last evening on Charlotte Street, Port of Spain.

Also killed was a hairstylist celebrating her birthday yesterday.

Another man was injured in the incident.

And in separate and unrelated incidents, two men were shot and killed between Friday night and last night.

As a result, the murder toll for the year so far stood at 489 last night.

The comparative toll on November 30 last year was 478.

The latest incident occurred at 6.41 p.m. at lower Charlotte Street.

Police said Sgt Roger Williams, 50, of the Court and Process Branch was killed along with hair stylist Natoya Christian, 31, while they were standing outside D Styles Mall.

Christian was about to have a drink to celebrate her birthday when a car drove up to her group of people.

One of the occupants of the car leaned out and opened fire, hitting Williams, Christian and another unidentified man.

Christian died on the spot.

People who had parked their cars nearby took Williams and the other victim to the Port of Spain General Hospital.

The other man was listed as stable last night.

Officers of the Port of Spain Divisional Task Force responded to the shooting and were joined by Homicide Bureau officers and crime scene specialists.

The scene was being processed up to 9 p.m. last night

At 12.30 a.m. yesterday police said Deon Darryl Beharry Allen, 25, of Mercer Road, Diego Martin was at Broome Street off La Puerta Road when he was ambushed and shot by a gunman.

Residents called police and Allen was found dead on the pavement.

In an earlier incident, Curtis “Bong Bong” George, 41, of Temple Street, Arima was ambushed and shot dead on Friday night.

Police said around 7.45 p.m. George was walking through Maturita Road, Arima when he was ambushed by two men.

One of the men who was riding a bicycle rode toward George, pulled out a pistol and opened fire.

The other man ran next to George and shot him as well.

They left him on the ground and fled the scene.

Neighbours who heard the gunshots contacted the Arima police who took George to the Arima District Hospital where he was pronounced dead on arrival.

Ian pleads for worker who robbed him

THE severed arm that was found in Longdenville last month may belong to a woman.

Several scholarship recipients enrolled at the University of The West Indies, St. Augustine,…