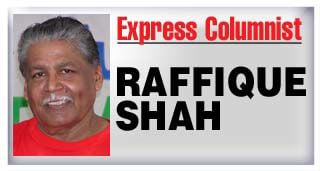 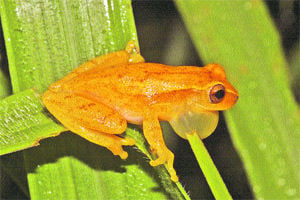 From 3.15 p.m. on November 17 to 3.15 p.m. on Sunday November 18 the first ever BioBlitz in Trinidad and Tobago took place in Tucker Valley, Chaguaramas. There are two main purposes of a BioBlitz: to see what is living in a chosen site and then to educate the public about what is there.

More than 80 scientists, experts and nature enthusiasts turned up over the weekend to record as many different species of plants and animals as possible in 24 hours. On the Sunday, more than 200 members of the public came along to go on guided walks, to watch the scientists at work and to learn something from the various organisations taking part.

The event was organised by Mike Rutherford, the curator of the University of the West Indies Zoology Museum (UWIZM), with help from members of the Trinidad and Tobago Field Naturalists' Club (TTFNC) and the UWI Department of Life Sciences. First Citizens very generously sponsored the event through the TTFNC, which allowed the setting up of a base camp in the overflow car park of the Macqueripe Bay Beach Facility. Here, lights, tables, microscopes, guide books, computers and collecting and processing equipment were set up for the scientists to do their work. The Chaguaramas Development Authority gave permission for the event and provided the security, who kept an eye on the base camp throughout Saturday night.

The experts and their helpers had been organised into seven groups, each focusing on different species or habitats birds, mammals, reptiles and amphibians, terrestrial invertebrates, plants, marine and freshwater. Each group had previously planned how to find and record their target species or survey their chosen habitat. They also had to engage the public at the base camp or by taking them on guided walks. Information stands by the Asa Wright Nature Centre, the Environmental Management Authority (EMA) Youth Ambassadors, the Ministry of Food Production/CAB International and the TTFNC informed the public about various environmental issues. The Zoological Society of Trinidad and Tobago was also there with their mobile zoo called the Zoo To You programme, which allowed people to get up close to a blue-and-yellow macaw, a tree porcupine, a wild hog, a manicou and several rabbits and tortoises, among others.

The Bird group included members of the TTFNC Bird Group, Asa Wright Nature Centre staff, and independent wildlife tour guides. Although spotting started on the Saturday, with some good records of night birds including a barn owl, the majority of the birding was conducted on Sunday morning. One group headed up Morne Catherine on the western side of Tucker Valley and had a very productive time, while another group, led by Courtenay Rooks and Kayman Sagar, took the eastern side of the valley. They headed up to the Tracking Station and back down through the Bamboo Cathedral along with the members of the public who had signed up for the guided walk. In total 97 different species of birds were seen or heard, including parrots, toucans, owls, hawks, hummingbirds, tanagers, trogons and manikins.

The Mammal group, which included Howard Nelson, Ellie Nelson, Luke Rostant and Darshan Narang, headed into the forests and set up mist nets to trap bats and Sherman traps to capture small mammals. Both types of traps leave the animals unharmed. The mist nets weren't too successful and so the bat numbers were low, but by checking the abandoned houses and bunkers in the valley they did manage to add a few species. They also heard and saw monkeys and agoutis and found signs of armadillo, but the highlight was the temporary capture of a Robinson's mouse opossum in one of the Sherman traps. In total, 12 different mammals were seen.

The Reptile & Amphibian group, which included American expert John Murphy and local specialist Adrian Hailey, started surveying on the Saturday afternoon and went on through the night using torches to spot snakes, lizards and frogs. They saw 17 reptiles and 12 frogs, although one of the reptile highlights was actually provided by another group, the Birders, who found a dead bushmaster (mapepire zanana) snake that had been run over on the road up to Morne Catherine. This attracted a lot of interest when it was displayed at the base camp, with many members of the public very curious to see the rarest venomous snake in Trinidad.

John Murphy and Howard Nelson led a combined Mammal, Reptile & Amphibian walk along the Edith Falls trail on the Sunday, where they saw some capuchin monkeys and a racer snake, along with some small frogs and lizards.

The Terrestrial Invertebrate group had several sub groups: Chris Starr looked for wasps, bees, ants and termites; Jo-Anne Sewlal did the spiders; Rakesh Bhukal had a large group of UWI students looking for scorpions at night-time using UV lights; Imran Khan and Kris Sookdeo noted the butterflies they saw and Mike Rutherford did the land snails. Chris Starr led the public walk along the trail from Macqueripe Bay to the golf course and showed people the variety of insects that can be found in the forest. Overall, they found 125 species, although there are still some that need further identification, including a possible new species of orb-weaving spider found by Sewlal.

The Freshwater group included Amy Deacon, Dawn Phillip, Raj Mahabir and Erin Mangal, who are all involved with the UWI Department of Life Sciences. They focused mainly on the Cuesa River where they used a variety of nets to sample for the fish, crustaceans, insects and worms that can be found in freshwater. The conditions weren't ideal as heavy rains from the week before meant the river was murky and flowing high, which made it more difficult to sample. However, by the Sunday the levels had dropped and Deacon was able to lead a guided walk along the river and members of the public saw many different plants and animals. In total they found 43 different species including guppies, damselflies, crayfish and freshwater snails.

The Marine group was led by Jahson Alemu, with help from members of the Trinidad and Tobago Eco Divers Club as well as many students from The UWI. They dove and snorkelled in Macqueripe Bay during the day and at night, and found a wide range of sea creatures. One of the highlights for some of the snorkellers was seeing a green turtle in the bay on the Sunday. As the Marine group couldn't do guided tours for the public due to safety reasons, it was better to bring the animals to them, so some of the smaller animals found were temporarily brought up to the base camp to be displayed in an aquarium. These included a juvenile French angelfish, a scorpionfish and several sea urchins and brittle stars. Despite the rather poor visibility underwater the group recorded 138 species of fish, corals, sponges, crustaceans and other invertebrates.

The Plant group was coordinated by Mike Oatham from UWI and had help from the National Herbarium. They headed out into the forests and collected samples of as many plants as they could carry before returning to the base camp and processing them late into Saturday night. Members of the Trinidad and Tobago Orchid Society came early on Sunday morning and recorded several species of orchids in the forests between Macqueripe Bay and the golf course. The rest of the day was taken up with the identification of the collected specimens, with the help of local plant expert Winston Johnson, and the guided walk. This was led by Rutherford who took members of the public on the trail to the old bunker behind the Samaan Park. At the end of the 24-hour period, 211 species of trees, shrubs, ferns and orchids had been identified.

The BioBlitz was also used as an opportunity to launch some brand-new publications. The TTFNC had their 2013 calendar, sponsored by First Citizens, which contained many beautiful photos of the wildlife and scenery of Trinidad and Tobago, and their Trinidad and Tobago Wildflower Guide, with photos of 100 commonly encountered flowering plants. Rutherford launched his Trinidad and Tobago Wildlife Guide, which contains detailed drawings of more than 200 mammals, birds, reptiles, frogs and insects. Both of the guides are pocket-sized and laminated, perfect to take on walks and should be available soon in all good bookstores.

Following the success of this first national BioBlitz, plans are already being made for a sequel next year, with possible sites including Arima Valley, Maracas Bay to El Tucuche, Aripo Savannahs and Charlotteville in Tobago.

Event in numbers and facts

Number of scientists and volunteers 80

Number of members of the public taken on guided walks 140

Number of species recorded by group:

'Inspector Robin' charged with pretending to be cop

President's House employee in court for stealing firearm and ammunition

Forty-two employees of the eco-lodge at the Asa Wright Nature Centre have been terminated.