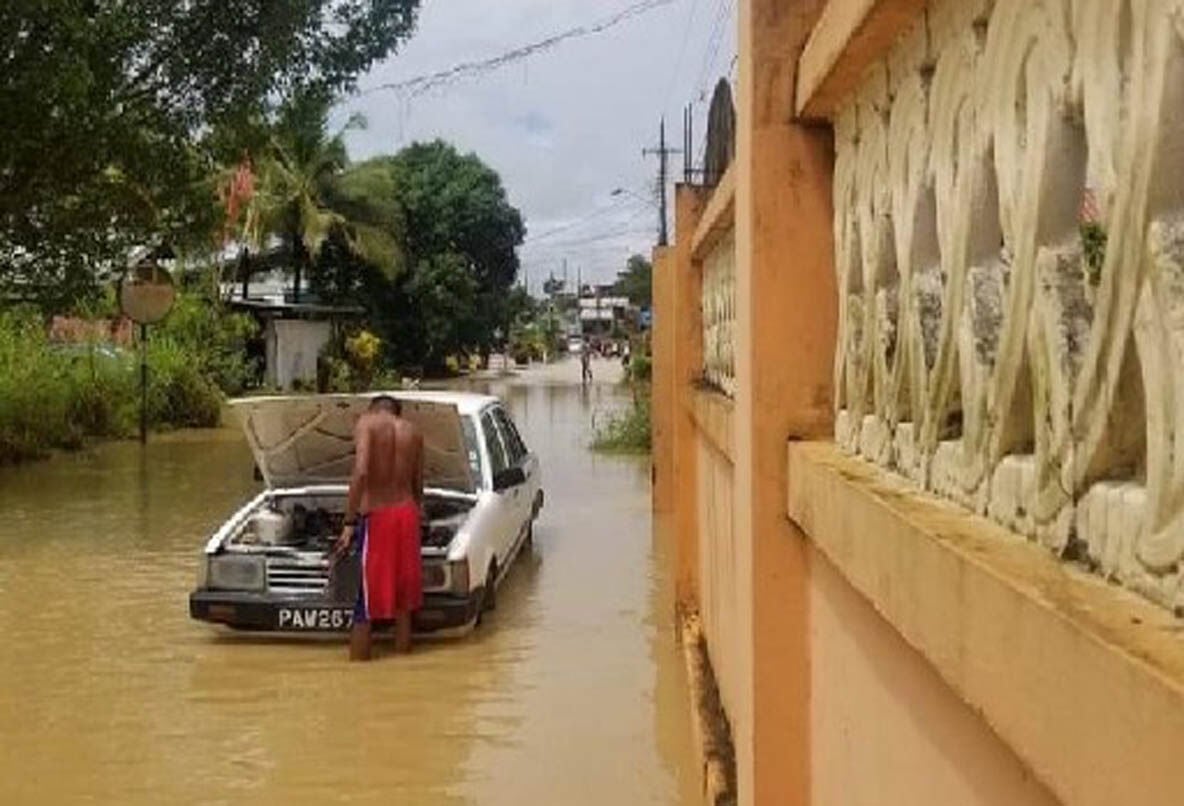 INSPECTION: A man stands in floodwaters as he inspects his vehicle at Cunjal Road in Barrackpore yesterday. 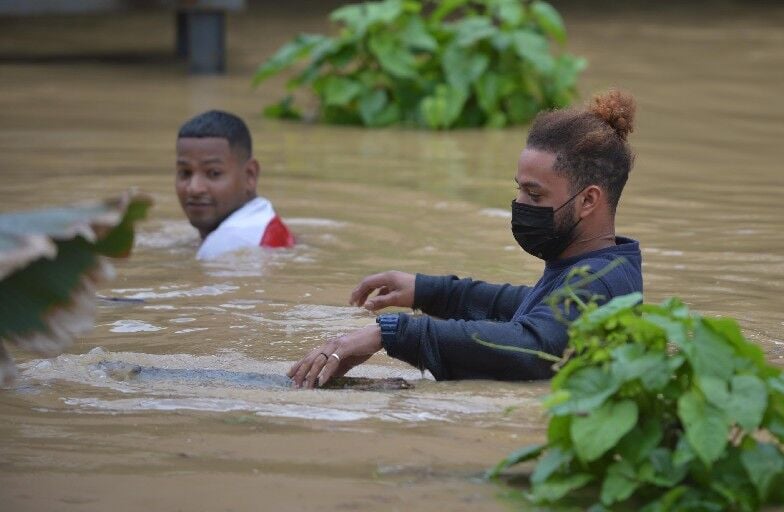 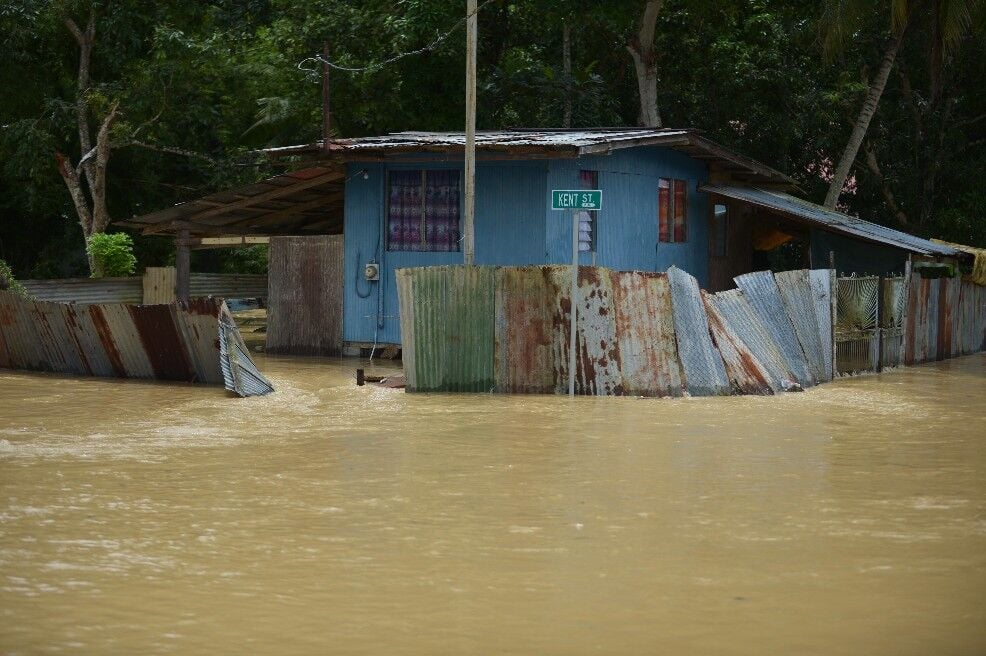 No way out: This house at Kent Street, Williamsville, is completely surrounded by floodwaters yesterday. —Photos: DEXTER PHILIP 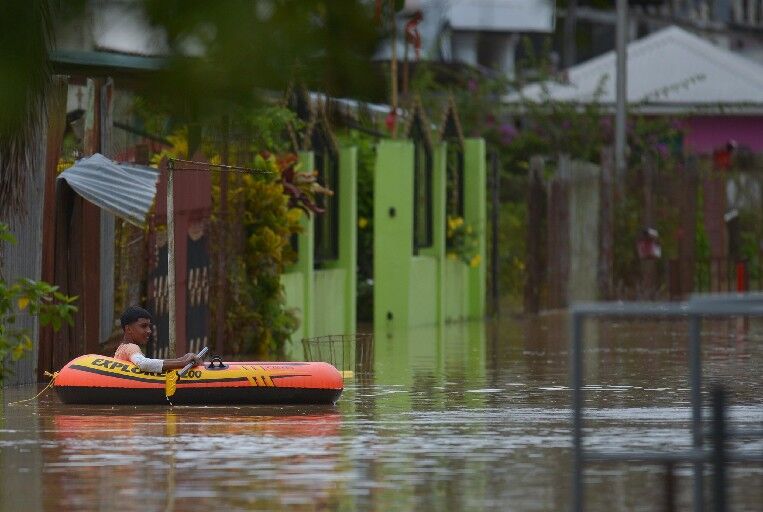 Dinghy ride: A boy travels through floodwaters in a dinghy, along Kent Street, Williamsville, yesterday.

INSPECTION: A man stands in floodwaters as he inspects his vehicle at Cunjal Road in Barrackpore yesterday.

No way out: This house at Kent Street, Williamsville, is completely surrounded by floodwaters yesterday. —Photos: DEXTER PHILIP

Dinghy ride: A boy travels through floodwaters in a dinghy, along Kent Street, Williamsville, yesterday.

In some areas, people were trapped in homes, with water expected to rise into the night, according the Trinidad and Tobago Meteorological Services (TTMS), which issued a yellow level riverine flood alert scheduled to last until midnight.

“While major rivers are contained at this time, smaller watercourses and rivers are currently at elevated levels. These levels are expected to gradually rise further as the day progresses.

“Intermittent rainfall activity of varying intensities is forecast to continue today, with some improvement by this evening. Localised flooding and ponding can be exacerbated in heavy or prolonged downpours,” the Met Office said of the situation yesterday.

It rained constantly for most of the morning, with the worst of the floods happening .

According to Moruga/Tableland Member of Parliament Michelle Benjamin, several parts of her district were under impassable floods that turned roadways into watercourses.

At least 15 reports of rising waters affecting the homes of residents had been received by the MPs office before noon, she said.

At Capiche Village, the road began crumbling in a recently paved area, with the Ministry of Works and Transport erecting a barrier to warn drivers.

“The Ministry of Works came and taped it off, and without the adequate attention to that slip and the weather and water against it, that entire passage into Moruga may soon be blocked off,” Benjamin told the Express in a telephone interview yesterday.

In addition to this, she said Cunjal Road, Toppin Trace and St Mary’s Village have also seen roadways being completely cut off.

In Williamsville, the Express observed residents along Kent Street marooned in their homes, with parts of vehicles covered by water. Resident Antonio Ruiz said two rivers in the area were full to capacity, and the rising waters had already begun seeping into his home.

“The water is at a standstill at the moment. The rivers on both sides are full, so all water is backing up and coming up.

“There is water coming up under my house and some is seeping through the downstairs apartment.

“Once the rain falls heavily here, rivers on both sides fill easily and there is nowhere for it to run off,” he said.

He said by midday several reports of compromised homes had been made to the Corporation. However, he said until the levels subside, not much assistance could be rendered.

“Even in the Williamsville end at this time there are a couple houses where the water will not go down until three this (yesterday) afternoon.

“People have reached out to the corporation, but there is nothing much we can do at this time because of the levels of flooding,” said Roopnarine.

At the Dabiedial Road end of South Oropouche, portions of the roadway were covered, forcing vehicles to traverse through rising levels of water.

The floods, he said, continued throughout the community. While there have not been many reports of floods affecting homes, he said the corporation was contacted to extract a pupil from the community to complete exams.

“The Rock Road area is known for flooding and from end to end there have been reports of flooding.

“I don’t think the water is affecting homes so far because we haven’t had any reports, but the corporation did have to get one student out to write her exams. We are trying our best to render assistance to anyone who needs it,” he said.

Delta variant is now at level of community spread

I got Delta variant at step-down

The tenth person to test positive for the Delta variant of the Covid-19 virus in Trinidad and Tobago did not travel to, or out of the country.

POLICE shot and killed a teenage dancehall artiste near his Laventille home on Saturday night, claiming he had pointed a gun at them, but his friends and neighbours alleged that he was killed unjustly.