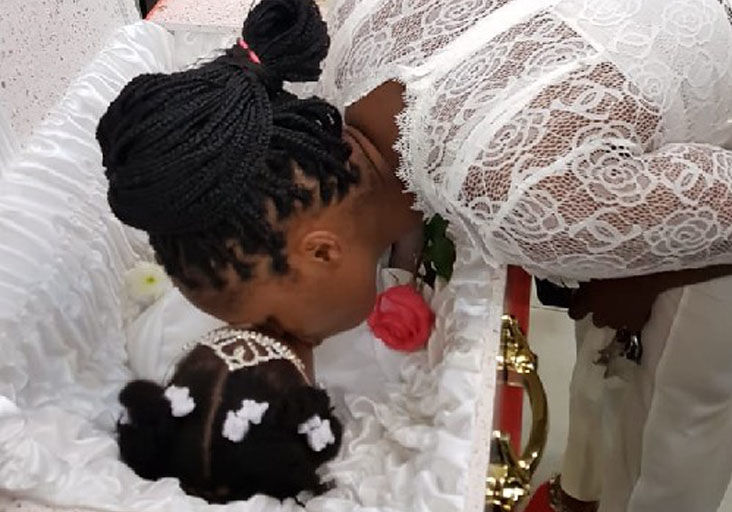 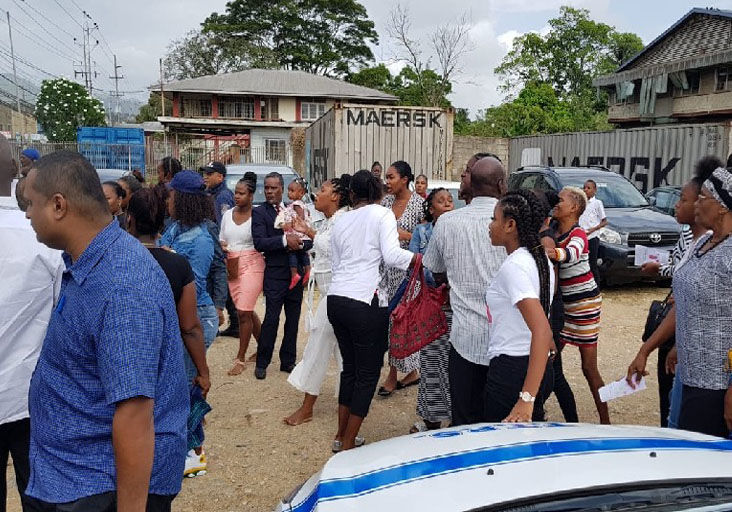 Conflict: Maysonia Thomas and mourners have a verbal altercation with the relatives of Michael Maynard at the funeral of Mukeisha Maynard yesterday at Simpson’s funeral home, Laventille.

Conflict: Maysonia Thomas and mourners have a verbal altercation with the relatives of Michael Maynard at the funeral of Mukeisha Maynard yesterday at Simpson’s funeral home, Laventille.

A troop of police officers was forced to intervene to bring about peace as drama unfolded when the children’s mother, Maysonia Thomas, and relatives of dead father Michael Maynard engaged in a verbal altercation over Makessi’s custody in the parking lot of Simpson’s ­funeral home, Laventille, which spilled into the Eastern Main Road.

On February 9, police said Maynard beat ­Mukeisha ­after she wet the bed, and then took his own life at their Kelly Village, Caroni, home. Maynard’s funeral was last Friday.

An autopsy was inconclusive.

Both Mukeisha and Makessi were taken by Maynard from their mother’s Morvant home in April last year.

Maynard’s relatives, in particular his sister Celestine Oliver, blamed Thomas for Mukeisha’s death, claiming they had called her repeatedly to take the children ­because of Maynard’s beatings. Thomas told the Express this was a lie.

Since Mukeisha’s death, Makessi has been in the care of their paternal grandmother, Sandra Maynard, who lives in Kelly Village.

Thomas had said she will fight for her son, while Maynard’s relatives claim the ­Children’s Authority has entrusted care to the grandmother, and they are ready to head to the courts to keep him.

The battle for custody ­began at the funeral yesterday, with police back-up ­being called in to contain the uproar.

Thomas tearfully delivered the eulogy at the service, and then stood at the entrance of the funeral parlour to prevent any of Maynard’s family from entering the service.

Oliver had brought Makessi to say goodbye to his sister.

When Thomas saw her son, she took his hand and carried him into the room where he sat in the front, near his sister’s pink and white coffin, which was decorated with pastel pink flowers.

Mukeisha’s coffin was then opened for viewing. Her body was dressed in an angelic white dress, and her head adorned with a diamanté tiara.

The bacchanal broke out when the time came to take Mukeisha’s body to the Tunapuna cemetery for burial.

Thomas’s relatives and a friend who is a member of the Defence Force shielded Makessi, and said he would be going with his mother.

Oliver objected and a verbal spat followed, with threats being made.

Mourners, most of whom were friends and relatives of Thomas, started shouting and demanded Thomas be left alone and given her son.

“Give the woman she child! That is her son! Allyuh wicked!” one shouted, with several of the women ­appearing ready to physically assist Thomas in the fight for Makessi.

“Allyuh from Kelly ­Village come down Laventille and want to play bad? Where ­allyuh was when yuh brother was beating the children?” said one woman.

Thomas removed her red high-heeled shoes and walked up to Oliver and shouted that she is not leaving without her son.

She made it clear she bore her son and they will not have him.

There seemed to be confusion as to who has legal rights over Makessi, as one senior officer present told the Express the Children’s Authority had given temporary authority to Sandra Maynard to care for Makessi, while another ­officer said the mother has legal rights to her child.

A police vehicle drove in and blocked the parking lot as officers searched for Makessi while the quarrelling continued.

A team of officers circled a green vehicle in which Makessi was seated, and someone pulled the boy out of the car and he became the centre of a tug of war, as a group of women and police officers circled him.

Tears streamed down Makessi’s face as the conflict continued and heated words were traded.

Eventually Thomas asked Makessi, in the presence of the officers, if he wanted her to accompany him with the officers. He said yes.

Thomas and Makessi sat in the back seat of the police Jeep, which drove off.

Pain from beginning to end

The drama did not end there, however.

Oliver told the Express the police drove to Morvant Police Station, where the angry exchange continued.

She said the police advised her they would bring Makessi to Caroni Police Station after his sister’s burial in Tunapuna.

Oliver said “Mr Johnson” from the Children’s Authority’s had advised her to take Makessi to the funeral. She said she went to the Caroni Police Station, and two officers accompanied her and Makessi to Laventille for the funeral.

Oliver said on arriving, Thomas said she did not want Maynard’s relatives present. Oliver said she waited outside and allowed Makessi to go with his brothers and sisters.

“When the service was over, they start to attack us and threaten to beat us, saying we cannot take Makessi,” she said.

An irate Oliver said she was told by Mr Johnson that they cannot find Thomas and Makessi after the burial, and they would “retrieve” him ­tomorrow.

In life, little Mukeisha suffered at the hands of her father, who hit her when she was mere months old.

In death, her final farewell was also filled with conflict.

In delivering the eulogy, Thomas said her daughter was in a better place. “Mukeisha was a loving, caring child who loved to play, pose for pictures and dance,” she said, as she wept openly.

She said Mukeisha loved children and got the ­nickname “Mamma” as she ­always loved babies and would wipe their mouths.

In a better place

Thomas listed the ­several schools her daughter attended, and disclosed she had a learning disability which caused her to enrol her at a special school—Each One Teach One—which she ­attended for eight months.

Thomas said Mukeisha could not spell her name, or identify numbers, colours and shapes.

“Mukeisha was born an angel she will be missed by many, she was loved by many. So Mamma, may you rest in peace and remember Mummy and your brothers and sisters and your friends love you. You are in a better place,” she said.

The Express tried to contact Thomas last night, but calls to her phone went unanswered.

Pastor Kelvin Douglas, in his sermon, said Mukeisha was cut short of her promise of life. He said it was difficult for him to conduct the ­funeral, as he is a grandfather and loves children.

He shared that his four-year-old grandchild wets the bed and nothing was wrong with that, as he joked this was the “blessing” he got although he spoke to her ­repeatedly about it.

Mukeisha Maynard, eight, was not raped by her killer father.

Parents can still beat their children, points out Children's Authority

The law allowed parents to beat their children, the Children’s Authority of Trinidad and Tob…

I begged them to rescue her

These were the words Makisha Thomas, 8, repeatedly told her father Michael Maynard even when he beat her mercilessly, according to Celestine Oliver who said her niece could have been alive today if her desperate calls for help were taken seriously.

Oliver said she called the police dozens of times as well as Makisha’s mother—Maysonia Thomas—on countless occasions—begging them to rescue the child from her abusive father.

A rape charge was pending against child killer Michael Maynard, who was out on bail when he killed his daughter, Makisha Thomas, eight.

The abuse eight-year-old Mukeisha Maynard suffered was no secret.

The house in which Michael Maynard killed his eight-year-old daughter Mukeisha, has been bur…

Granny bids to get Makessi

The paternal family of ten-year-old Makessi Maynard have begun legal action to obtain custody of the child.

As of tonight, the Health Ministry reports the following: